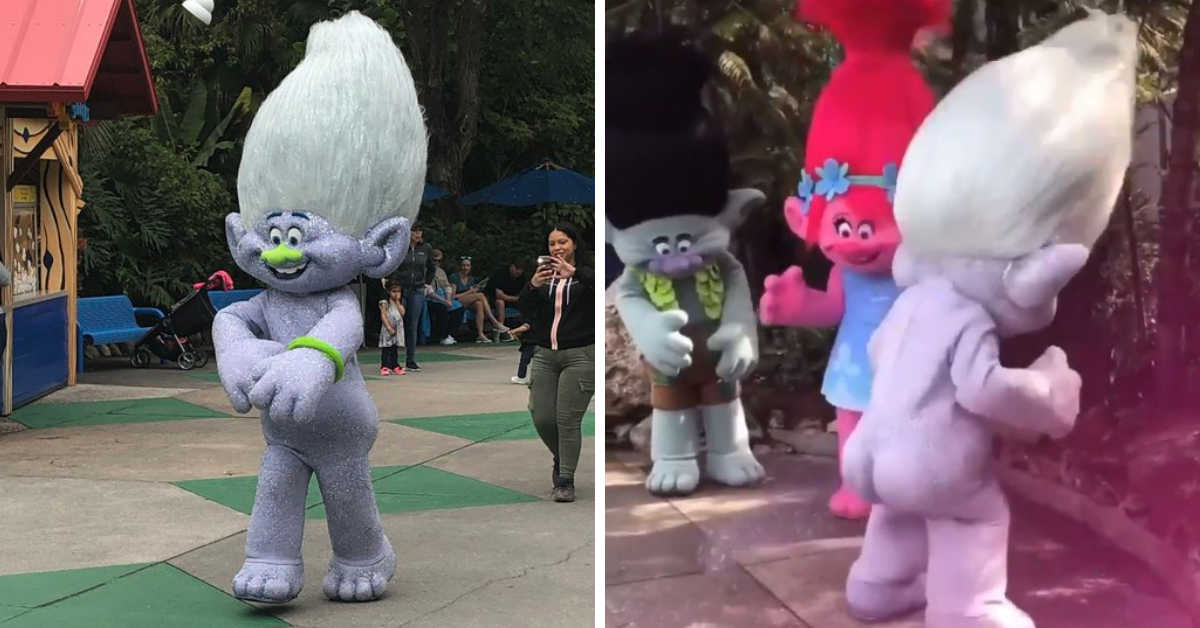 If anyone could claim to share a rivalry as intense as the one between Coca-Cola and Pepsi or McDonald's and Burger King, it's the people in charge of Disney World and the Universal Studios theme park.

There was never a time where the two weren't in fierce competition, but the stakes have only gotten higher now that Disney has Marvel and Star Wars to play around with, while Universal has the might of the Harry Potter universe.

However, Universal's latest move to attract visitors is a strange one. It might seem familiar to those who saw the 2016 Trolls movie, but as someone who hasn't, I hope those folks can understand my confusion.

At Universal Studios, the chance to meet a character from the Trolls movie is nothing new. 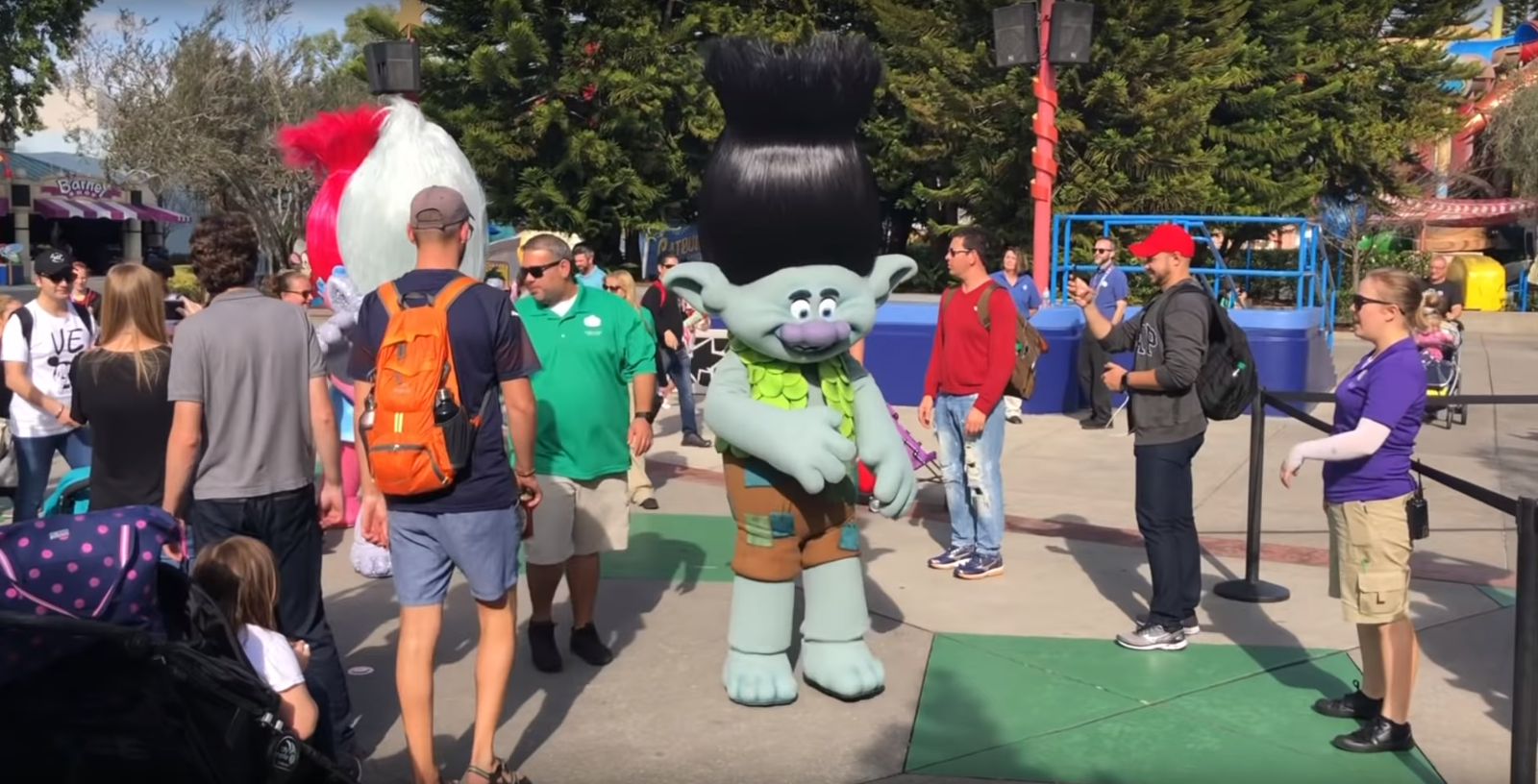 According to Attractions Magazine, a couple of friendly trolls have been roaming the park for some time now.

One of them is Branch, who's apparently a paranoid survivalist in the movie. That doesn't come across here, though.

The other seasoned Universal Studios vet is Poppy, who has a reputation as the happiest troll ever born. 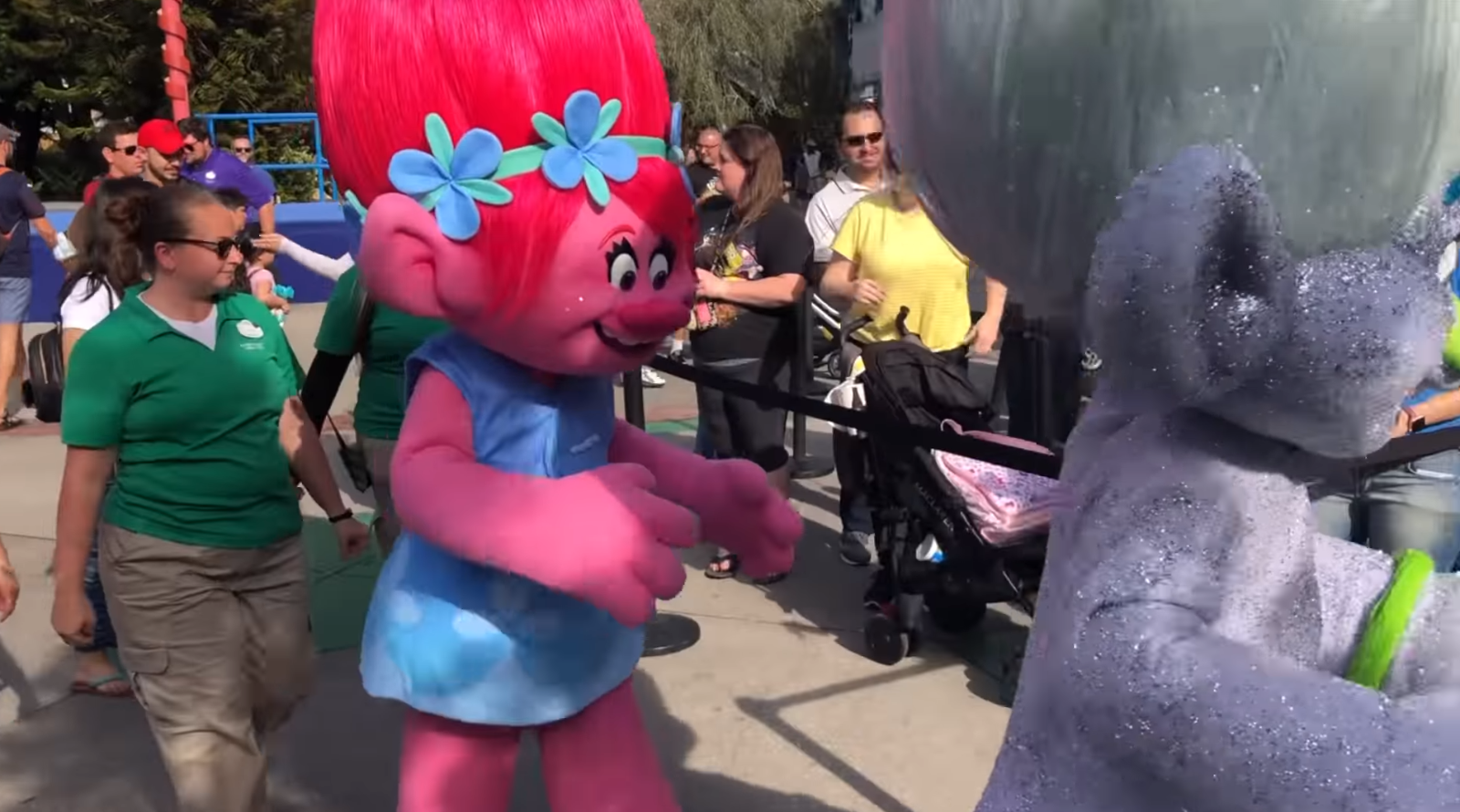 But as bright and colorful as these two are, Universal Studios obviously thought the gang wasn't complete without a third troll, who they describe as a "living disco ball."

And so, I suppose it's time we meet the troll who goes by Guy Diamond. 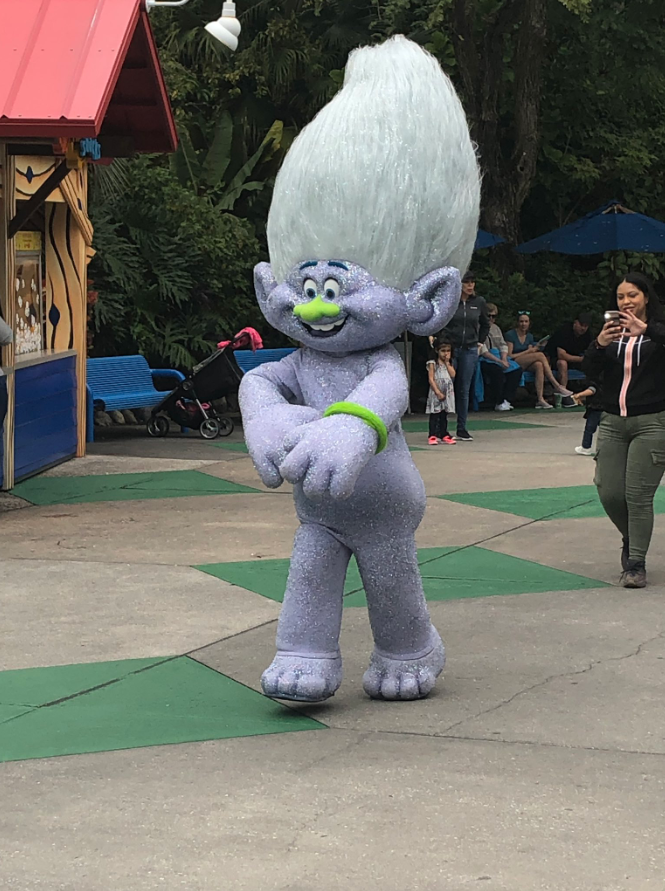 The first thing you're likely to notice about Mr. Diamond is that he's not a particularly big fan of pants. That's one of the benefits of living somewhere as warm as Orlando, I suppose.

However, before you have a chance to get used to that, Guy will show off the second thing you're likely to notice about him. 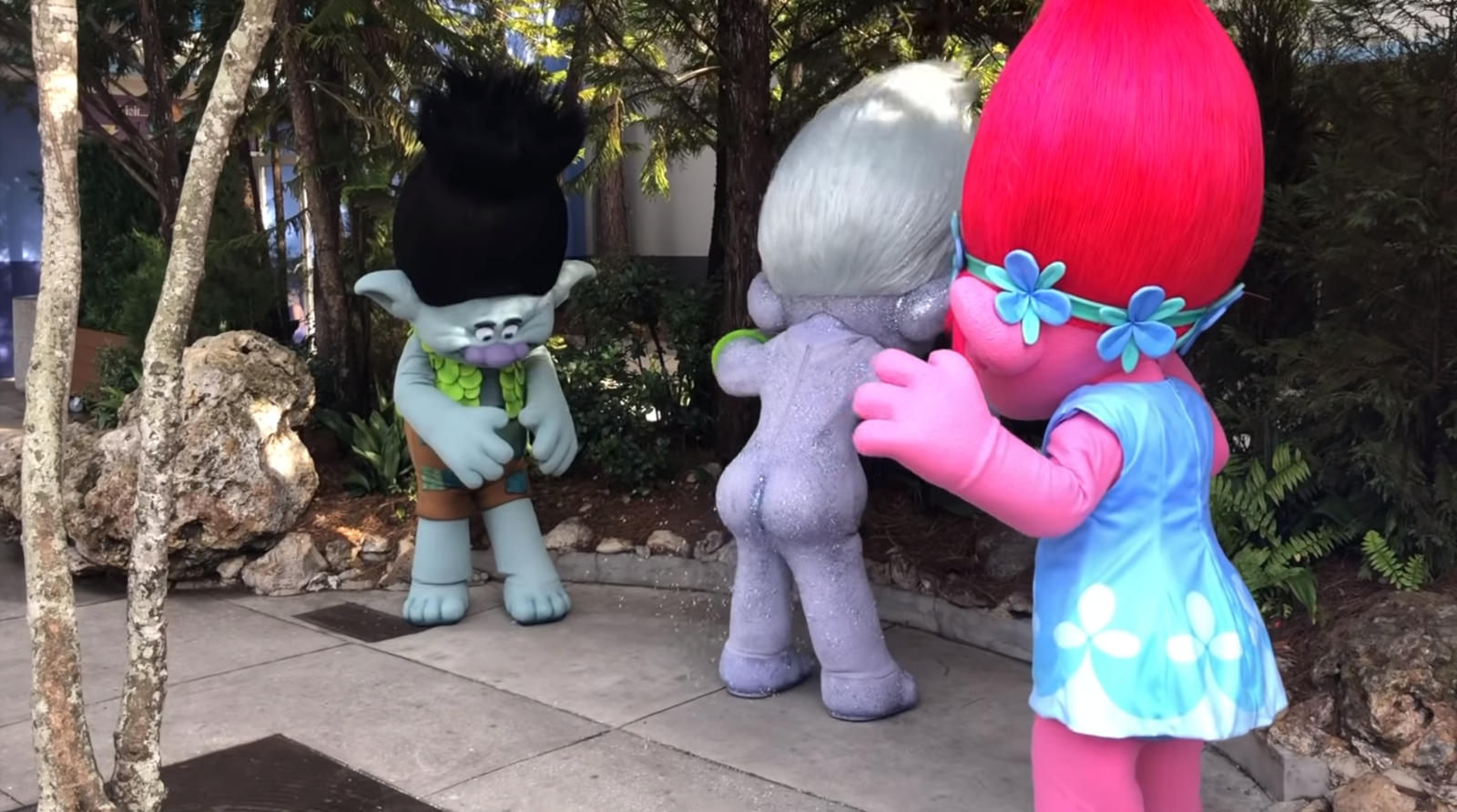 Namely, the fact that he farts glitter. He makes quite a big production out of it, too.

He turns himself around and then with a little hop, lets the sparkles fly in one of the more...interesting ways someone could do that.

For references sake, here’s the clip from the actual movie, Trolls.

What can we say? He’s got great aim, a great name, and his farting game has given him fame!

As you might imagine, Guy's introduction earned the park some mixed reactions.

Although some Twitter users were amused and curious, this one was clearly having none of it. Of course, the last thing this parent would need is for her kids to suddenly start clamoring to meet Guy.

That's how it goes, sometimes.

Some were actually inspired by Guy Diamond’s sparkly toot.

To be fair, anything that makes people laugh will entice them to support that thing.

Meanwhile, others had much grander ambitions for the farting troll.

If there's one thing that this year's halftime show was missing (besides more Spongebob), it was a part where Adam Levine suddenly started farting glitter.

Now, that would've gained some attention.

It's good to see that somebody spared a thought for the person who has to wear this suit.

However, I would maintain that there are a couple of folks at the park who have it even harder than the employee portraying Guy Diamond.

That honor belongs to these folks, who have the unenviable task of cleaning all of the glitter up. 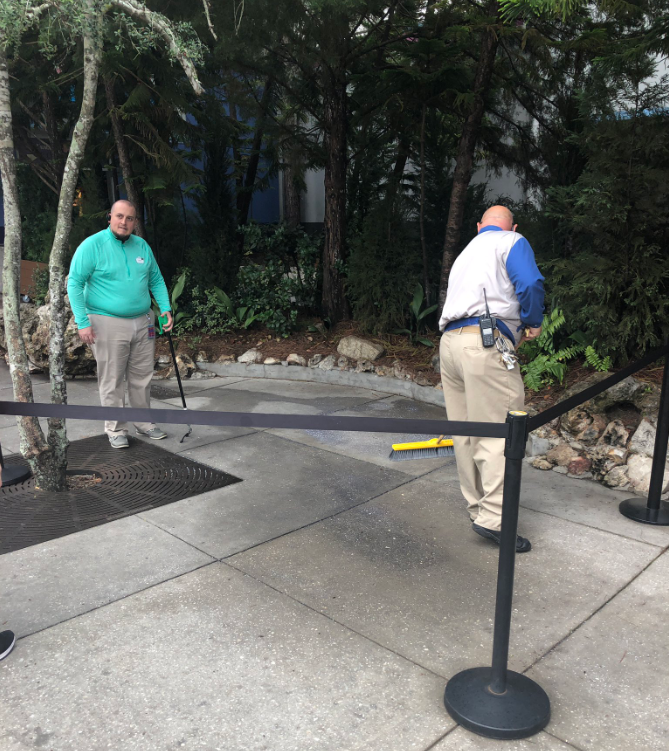 Whether it came out of a troll's backside or not, cleaning up glitter isn't an easy task at the best of times. And based on how much we can see here, Guy can apparently hold a lot of glitter gas.

Of course, this is one of those things that some of us have to see for ourselves.

And for those who can't justify the cost of air travel to their families if it's just to see a troll fart glitter, here is Guy working his magic.

If watching a video is too much of a commitment for you, take a gander at this live-action gif we made.

There’s truly nothing more mesmerizing than a wholesome troll milling about your kids, and occasionally farting glitter out of his fake-nude butt.

At the end of the day, it seems like Universal is taking complaints and compliments very seriously.

All they can do is try to appease everyone’s comments and criticisms by acknowledging them first.

And if that doesn't work, well, we've always got the die-hard fans of Guy Diamond to fight back.

Every controversial troll needs fans like this to keep them afloat. A lawsuit definitely seems like the appropriate reaction.