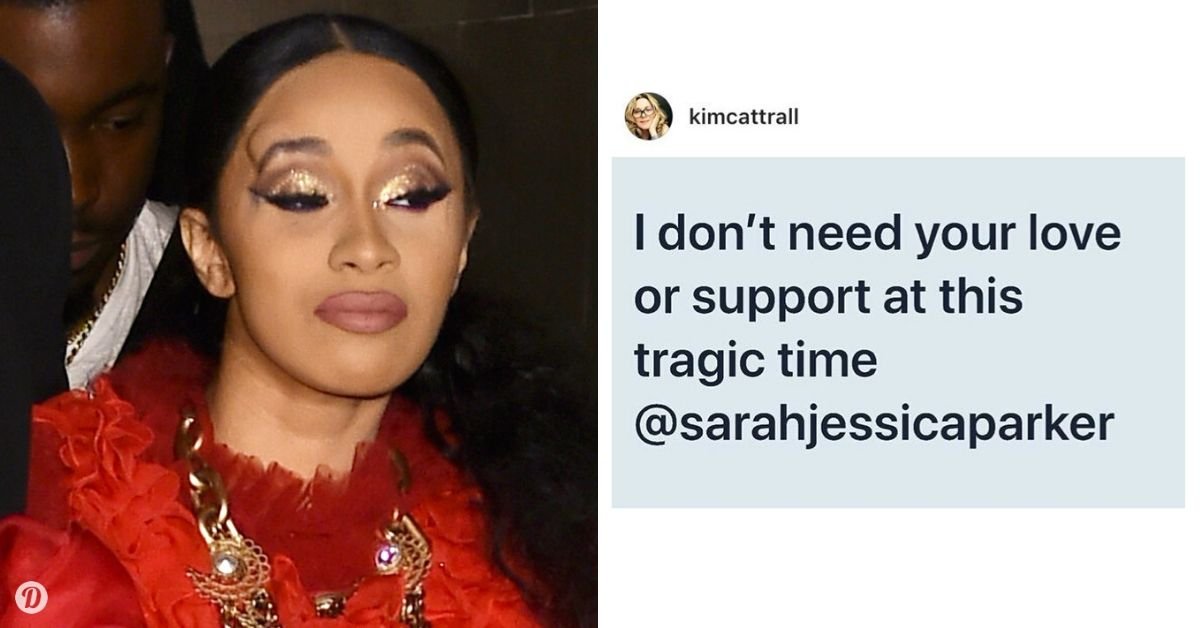 14+ Of The Most Dramatic Celebrity Feuds From The Last Decade

It's time to look back at the wild decade we've had and compile the most memorable celeb feuds.

Spoiler alert: Taylor Swift takes up a large portion of this list.

I don't know about you, but Tristan Thompson cheating on Khloe Kardashian with her little sister's best friend, Jordyn Woods, was an iconic part of 2019.

The drama between Chloë Grace Moretz and Kim Kardashian West began in 2016, after Chloë spoke out negatively about Kim's nude selfie.

Eventually, Kim's sisters got involved as well — it was a whole mess.

Chrissy actually managed to drive President Trump to hit the block button. But that wasn't the end of their beef.

Rihanna and Ciara took to Twitter for a very public argument, that all started with Ciara telling E! that Rihanna "wasn't the nicest." It was all downhill from there.

Rihanna was quick to respond, tweeting: "My bad ci, did I 4get to tip u? U gangsta huh? Haaa".

They weren't done there. 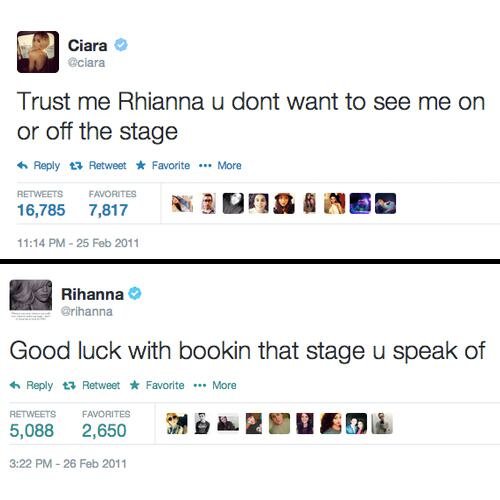 When Ciara told Rihanna she wouldn't want to meet her on or off the stage, Rihanna pointed out that Ciara wasn't exactly booking that many stages at that point.

It all started when Snoop Dogg shared this photo on Instagram, making fun of Iggy Azalea.

Alright, let's dive into all the times Taylor Swift has had bad blood (pun intended) with another celeb in the last 10 years — starting with the most recent.

Ever since Scooter Braun sneakily obtained the rights to all of T-Swift's music by buying out the label she was signed to, things have been tense, to say the least, between these two...

This feud is the Cadillac of celebrity feuds.

No one will ever forget the epic moment in 2009 when Kanye West arrogantly stole the mic from Taylor as she was accepting an MTV award and said Beyonce should have won instead.

And then in 2016, he rapped the lyrics: "I feel like me and Taylor might still have sex / Why? I made that [expletive] famous." After Taylor released "Bad Blood" in 2014, rumors have circulated that the song was directed at Katy Perry, and here's why:

"She basically tried to sabotage an entire arena tour. She tried to hire a bunch of people out from under me. And I'm surprisingly non-confrontational — you would not believe how much I hate conflict. So now, I have to avoid her. It's awkward, and I don't like it," Taylor told Rolling Stone.

“Honestly, it’s really like she started it and it’s time for her to finish it,” Katy later said in an interview with James Corden.

Don't worry, they've since buried the hatchet and are friends again!

This one started at the 2013 Golden Globes, when Tina Fey and Amy Poehler joked about Taylor Swift’s love life, a hot topic at the time.

“You know what Taylor Swift? You stay away from Michael J Fox’s son,” Tina said. “Or go for it,” Amy replied. “No, she needs some me-time to learn about herself,” Tina added.

In a later interview with Vanity Fair, when asked about the incident, Taylor said: "There’s a special place in hell for women who don’t help other women.”

Let's be honest, Azealia Banks is better known for picking fights with other celebs than she is for being a rapper. So it was really no surprise that she had it out with Lana Del Rey.

The pair had an extensive Twitter feud after Lana tweeted her dismay over Kanye West's support for President Donald Trump.

But the drama really hit the fan in January 2017, when Charlie said: "I'd like to mash those two together and then kick them to the curb. They deserve each other," on Watch What Happens Live about Selma and his ex Two And A Half Men co-star, Jenny McCarthy.

During an interview with The Guardian, Bette Midler called out Ariana Grande for being a part of the "pornification" of pop music.

"It's always surprising to see someone like Ariana Grande with that silly high voice, a very wholesome voice, slithering around on a couch looking so ridiculous," she said. "I mean, it's silly beyond belief and I don't know who's telling her to do it."

Obviously, we all remember that one Solange Knowles was caught on surveillance viciously attacking her sister's husband, Jay-Z, in an elevator after the 2014 Met Gala — it's kind of a hard thing to forget.

Cardi B vs. Nicki Minaj. 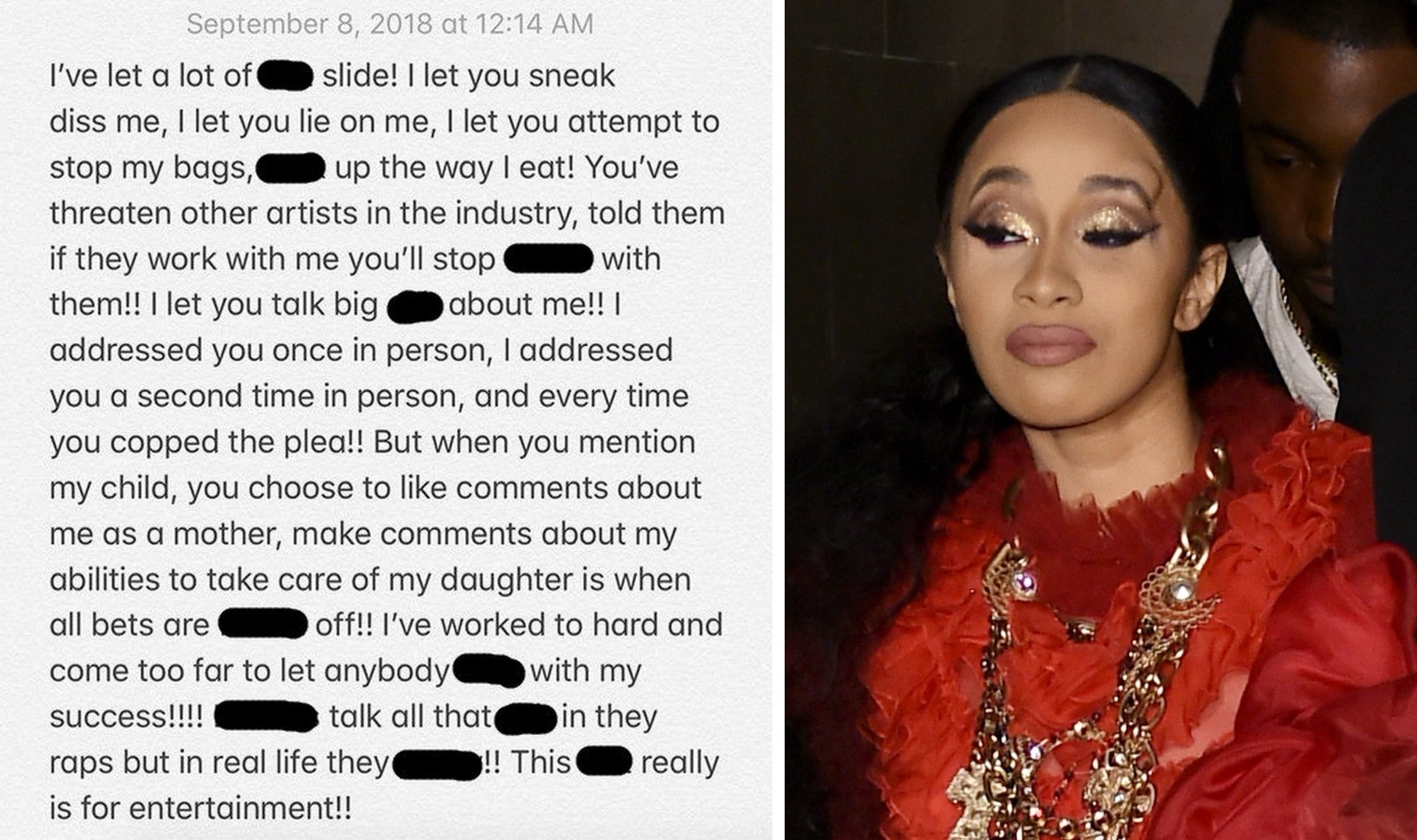 Things came to a boiling point between these two when Cardi attempted to throw her shoe at Nicki, at The Plaza in New York for the Harper’s Bazaar Icons party. She claimed it was because Nicki had spoken ill of her parenting abilities.

Cardi then took to Instagram with her thoughts on the incident. By the end of October 2018, it seemed Nicki was getting tired of all the drama, so she extended the olive branch via Twitter, hoping to patch things up. Cardi screenshot the tweet and posted it on Instagram with her response, finally putting an end to the feud.

Zayn vs. One Direction.

When former bandmate Louis Tomlinson tweeted, "Remember when you were 12 and you used to think those Mac filters for your pictures were cool haha ! Some people still do HA!" referencing some photos Zayn had posted earlier, he got back at him with the tweet above.

Eminem insists he and Mariah dated, once upon a time. Mariah remembers the situation a lot differently.

This has lead to years of the two going back and forth at each other in their lyrics, with Mariah's ex-husband Nick Cannon threatening to "whoop his ass" as recently as this year.

Of course, we couldn't just have Azealia in here once — she loves drama. She managed to start some when she visited Elon Musk's house to collaborate with his girlfriend, musician Grimes, and then claimed she was pretty much being kept there without her phone.

Musk, of course, denied the claims, and said he hadn't even met Banks while she was at his house.

When Miley Cyrus gave an interview calling Nicki "not too kind," it lead to Nicki dramatically calling her out on stage at the VMAs. "Now back to this [expletive] who had a lot to say to me in the press the other day," she said before her infamous, "Miley, what's good?"

Last, but certainly not least. let's take a moment to appreciate this iconic and very public feud between Kim and SJP.

This post by Kim tells you everything you need to know about this feud, really.