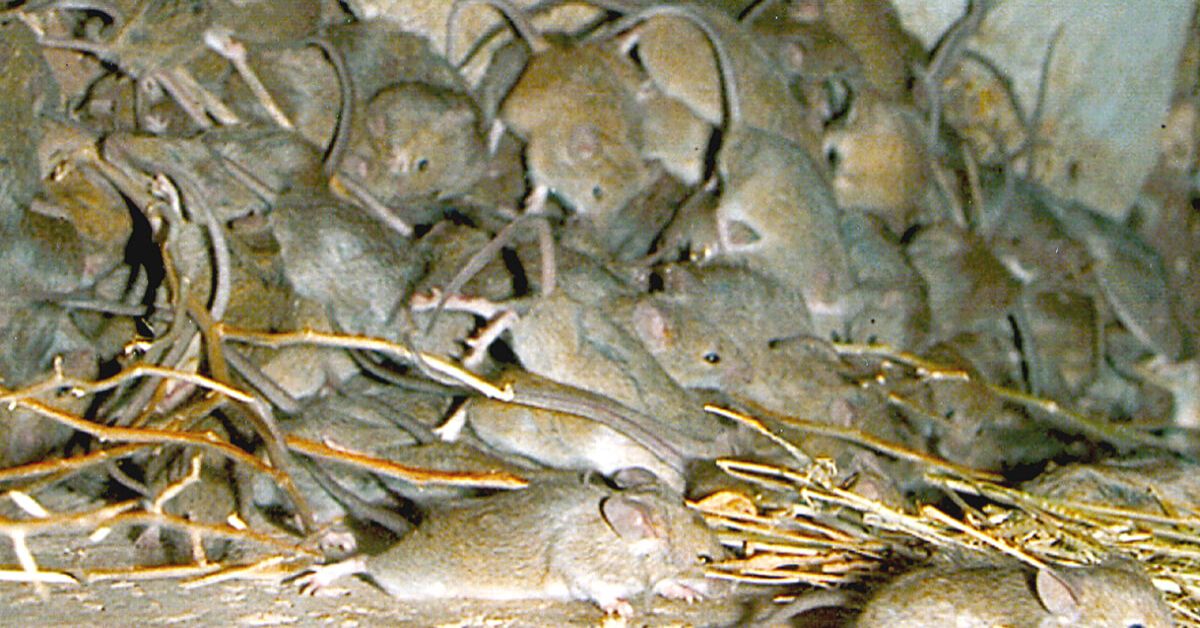 Swarms Of Millions Of Mice Overrun Parts Of Australia

Australians can't seem to catch a break lately. As if a devastating, historically awful wildfire season in 2019-20 wasn't bad enough — fueled at least in part by a preceding drought — shortly after those fires came under control, the COVID-19 pandemic arrived.

For farmers in eastern Australia, things actually started to look up for a bit when much needed rains brought a bumper crop harvest. Unfortunately, that good news didn't last long as floods swept through the region.

And now, in the wake of the high water, the area's farmers are under siege by a disturbing plague of mice, as NBC News reported.

Life in the middle of a mouse plague is a constant nightmare.

Even if you don't have a phobia about rodents, they're an ever-present nuisance running rampant, chewing everything in sight and leaving horrific waste behind them. Those crops that the farmers were only too happy to harvest have been ravaged — even the crops stored in silos.

Hay doesn't have to be chewed up to be rendered useless — when mice urinate on hay, it can't be fed to livestock anymore and has to be destroyed. At up to $500 per bale, just one district in New South Wales lost $40 million worth of hay to the rodents, The Guardian.

It doesn't get any better in homes, either.

Of course, the mice chew whatever they can find, but they're also ruining homes and businesses. People have reported finding mice in drawers, peeking out of vents, and running across desks.

One cafe owner told The Guardian that she's had her refrigerator serviced seven times, adding up to thousands of dollars in repairs, after mice crawled into the fan and died, clogging it up. And a grocery store worker said he had to arrive five hours early for work to dispose of dead mice, droppings, and any food they might have gotten into.

Residents have been trading stories of how many mice they catch in a day — sometimes into the hundreds — and that's just those who were able to buy traps before the stores ran out. Everyone else has had to come up with their own makeshift mouse traps.

Australia's rodent problem is as bad as anyone has ever seen.

Plagues of mice have been known to happen there, with notable plagues occurring in 2007 and 1984 — the worst, in 1993, caused about $96 million worth of damages, The Guardian reported.

But this year, lifelong resident Guy Roth, who works at a University of Sydney research farm, told NBC News that it's "the worst mice plague I've ever seen."

"I know we had two mice per square meter in our cropping paddocks at the peak... [so] if I have the math right, it's 20 million mice. That's more than the population of most big cities."

While the economic and psychological toll of the plague has been noticeable, there have been health costs as well.

Three people in hospitals in New South Wales were bitten by mice while there for other issues, and one rural shared a picture of dead mice in her drinking water supply.

"We always filter the water going into our house from the tanks, so for us personally we feel we've covered our precautions so we didn't notice anything with the taste. But the smell of the mice at the top of the tank was so disgusting," she told ABC News.

One man is "lucky to be alive" after contracting a rare type of meningitis carried by the rodents and present in infected mice's droppings. He spent a week in hospital, during which time he lost eight kg (about 17 lbs).

Getting rid of millions of mice won't be easy.

With the traps clearly not doing enough to curb mouse populations, many farmers in Australia held out hope that more flood waters would wash the rodents away.

Others have sought out approval from the government to spread poison bait around via drones — far from an ideal solution as poison will kill many other animals in addition to the mice.

In the meantime, the government is discussing ways to financially compensate the farmers affected by the mouse plague.