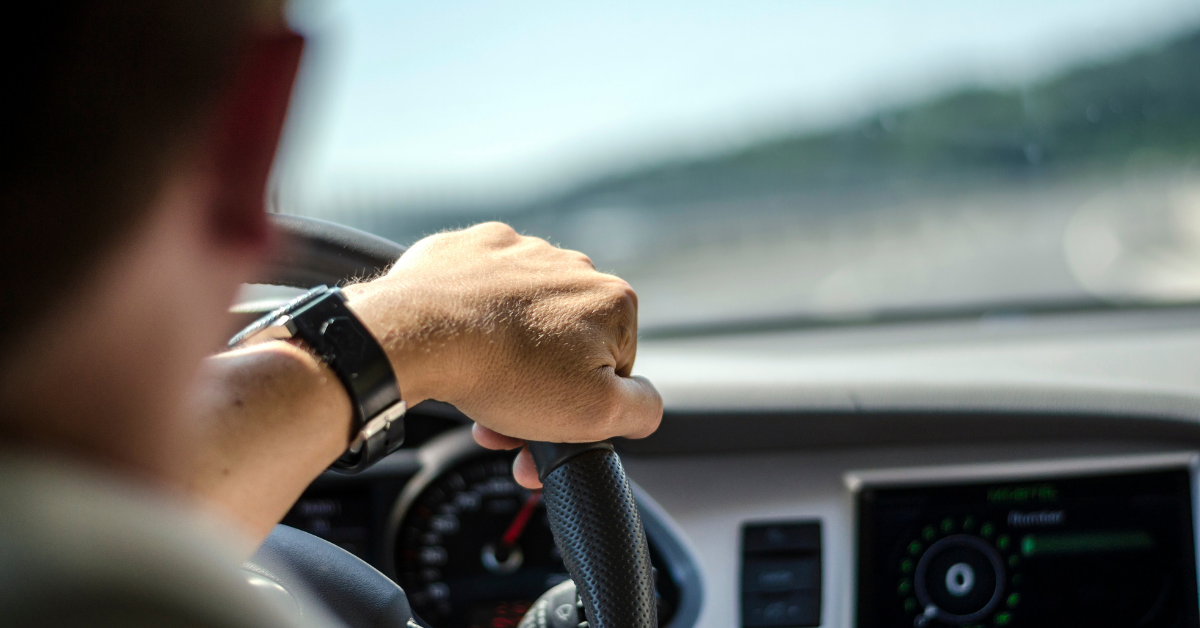 The unfortunate reality of our society is that women still find themselves trapped in situations where they really and truly fear for their own safety. In these moments, they become desperate for any means of escape, and sometimes have to go so far as enlisting other people's help in order to do so.

Thankfully, there are good people in this world who recognize a dangerous situation when they see one, and are more than willing to play along if necessary, especially if it means helping a woman feel safe again.

One Uber driver found himself suddenly involved in a difficult situation where his passenger feared for her safety. 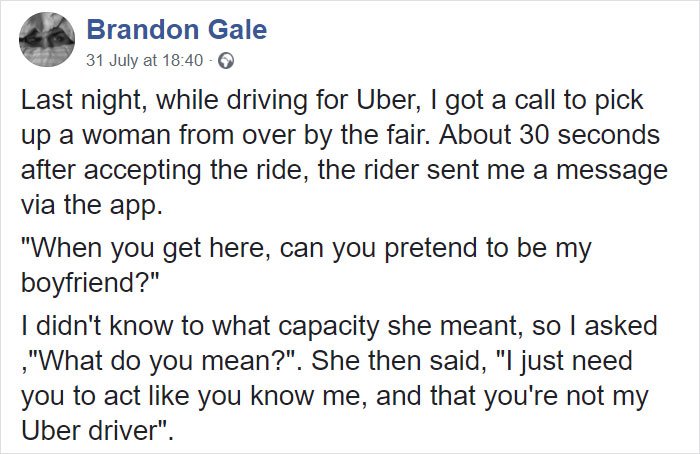 Brandon Gale took to Facebook to share one of his most unforgettable rides in which his female passenger sent him a message ahead of their pickup, asking him to please pretend to be her boyfriend.

"I just need you to act like you know me, and that you're not my Uber driver," the passenger explained.

Understanding that this girl must be in somekind of trouble, Brandon obliged, and prepared his car and himself before he fetched her. 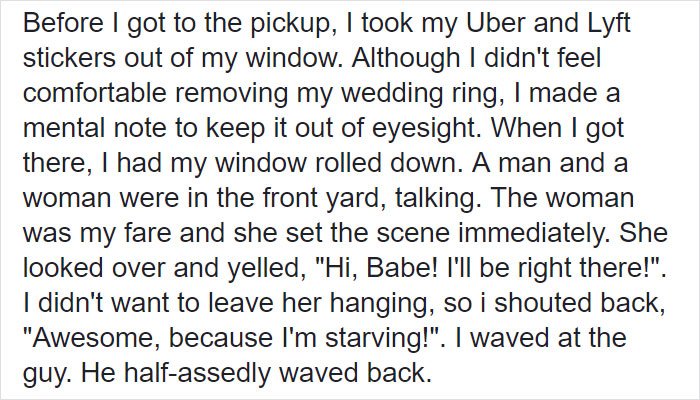 At the pickup, he found his passenger talking to a guy who she was immediately eager to get away from as she launched right into the fake boyfriend ruse with Brandon.

Thankfully, he didn't hesitate and was able to play along effortlessly.

Once they were away from the guy, Brandon's passenger was finally able to explain the situation to him. 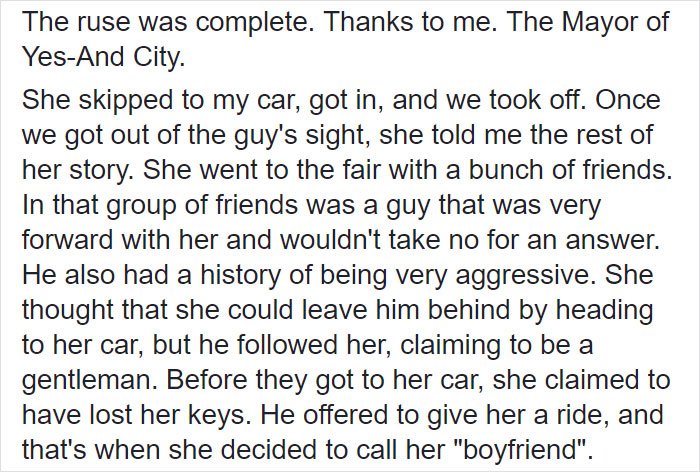 Unwanted advances from the man had made the passenger very uncomfortable, particularly when he wouldn't let up, despite her clear unwillingness to spend any more time with him than they already had.

Brandon used his Facebook post to inform other men that "no" certainly means "no', and not "try harder." 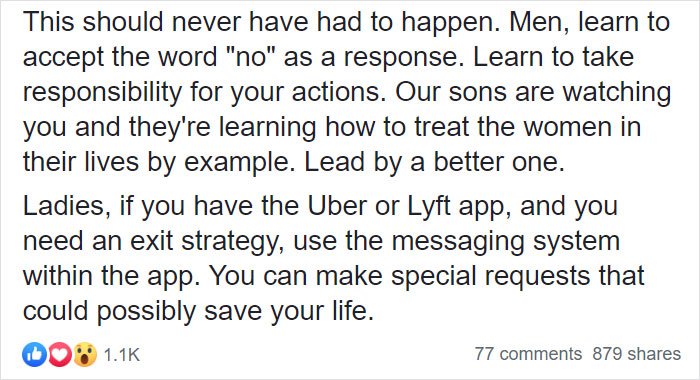 "Our sons are watching you and they're learning how to treat the women in their lives by example," he wrote. "Lead a better one."

He also encouraged women who find themselves in situations similar to that of his passenger's to use the messaging systems on rideshare apps as an exit strategy, if necessary.

Brandon has since posted an update following the immensely positive response his first post got.

He reiterated that Uber and Lyft apps do have messaging systems that can help out any passengers who don't feel safe upon their pick-up, and also said that churches in the area are also on standby, should anyone need further assistance.

As an Uber driver, Brandon said he's experienced his fair share of rather unique pickup situations. 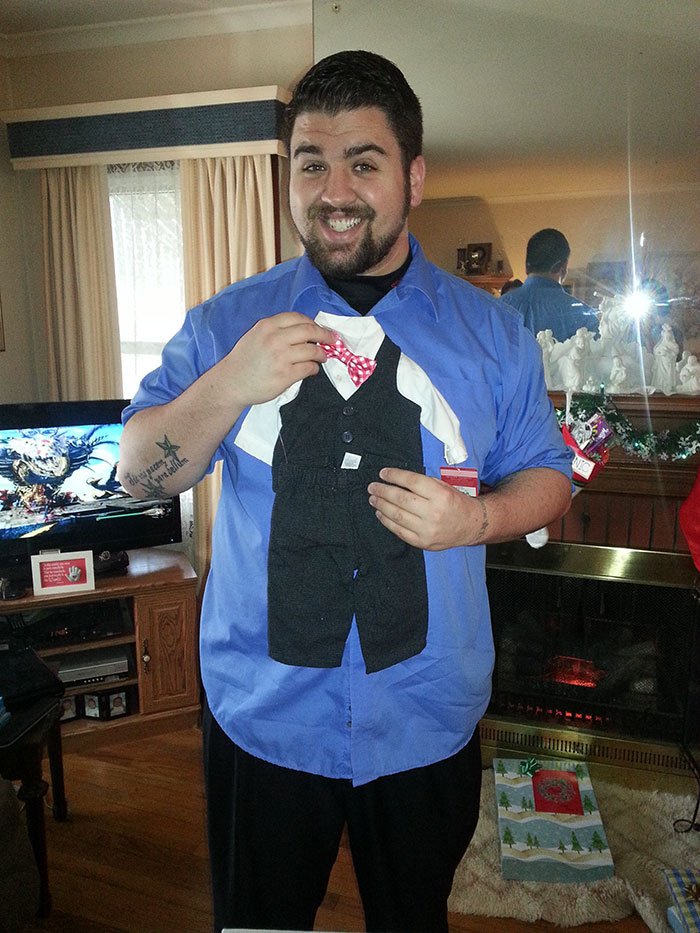 In an interview with Bored Panda, he said some of his passengers have included mothers and children escaping abusive homes, as well as a young man who had just told his father he was gay and didn't receive the support he had hoped for.

Brandon also said he's pretended to be his friends' boyfriend before at bars to ward off unwanted attention, but this is the first time it's happened to him as an Uber driver.

“After I posted the story, a few of my friends texted me and told me they were proud of me.," he said. "Which is nice, and it felt good."