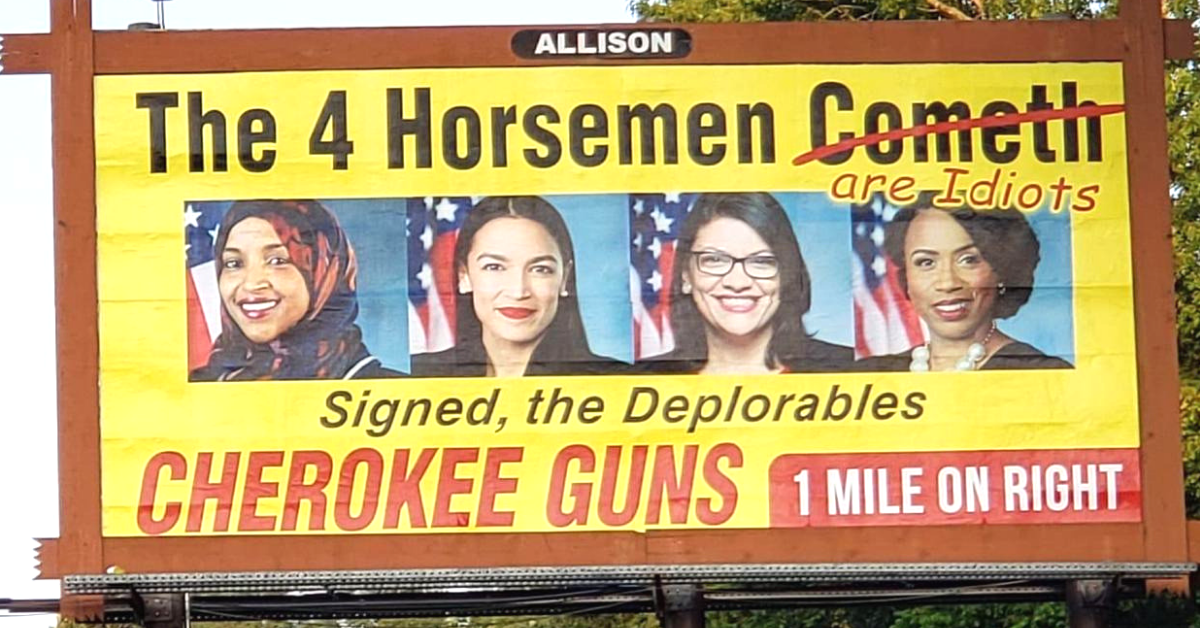 A North Carolina advertising company has announced it will be taking down a gun store's highly controversial billboard in which it targets four minority congresswomen, dubbing them "idiots", CNN reported.

'The Squad', as the women are collectively known, consists of Reps. Alexandra Ocasio-Cortez, Ilhan Omar, Ayanna Pressley and Rashida Tlaib, and have increasingly become the target of hate since President Trump tweeted for the congresswomen to go back to where their own countries.

Trump's tweets called out the four minority lawmakers, all of whom are American citizens.

In his series of posts to the social media site, Trump suggests the 'Squad' "go back" to their own countries and "fix" them instead.

"These places need your help badly, you can't leave fast enough," he wrote.

Following this, Trump took aim at the women once again during his campaign rally in North Carolina last week.

The 90-minute rally saw him repeat his call for the women to return to their own countries, suggesting they "hate" America. He then turned his attention specifically to Rep. Omar, who he accused of supporting the terror group al-Qaeda, as well as minimizing 9/11.

His hateful speech incited a chant of "Send her back!" among his supporters, one which the POTUS made no noticeable attempt to stop or condemn.

Now, in that same state of North Carolina, a gun store's billboard has become the subject of heated controversy. 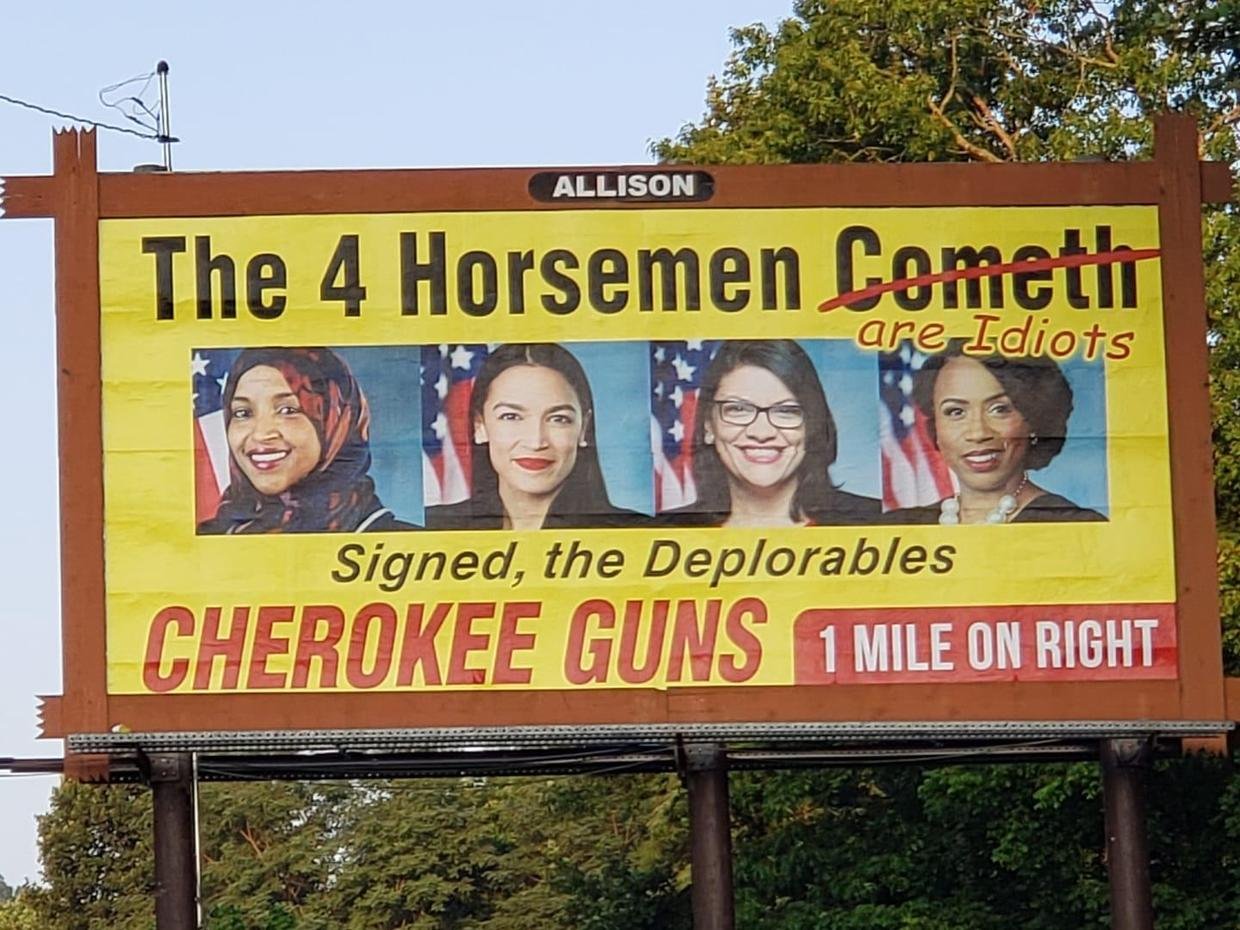 The Cherokee Guns advertisement, featured about one mile from the store in Murphy, NC, shows the four minority congresswomen with a message above their photos.

"The 4 Horsemen cometh," the sign reads. "Cometh" was scratched out and replaced with, "are idiots."

Store owner Doc Wacholz said he chose to target the women because of "their message of turning this country into a socialist country."

"We give no apologies as we believe in our message (as many others do)," he told WTVC in a statement. "The bottom line ⁠— this country will never be a Socialist country."

He added, "I don't care if it was four white women or four white guys that had their view ⁠— they'd be on the billboard."

The store has been no stranger to utilizing billboard ads to express their collective political leanings. 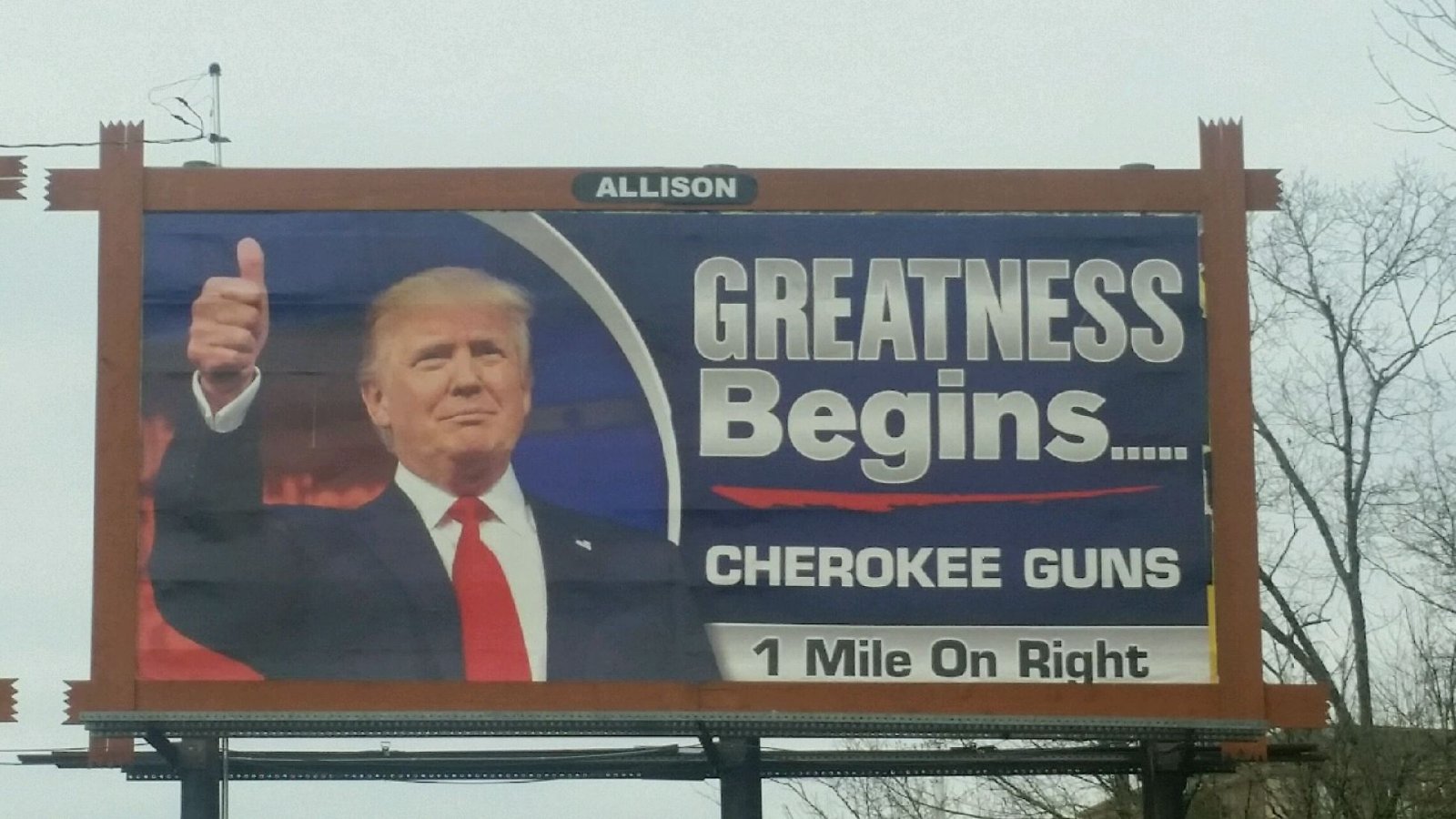 Photos posted on the store's Facebook page reveal some of its past advertisements, including one in which Santa Claus appears alongside a few bullets.

Rep. Tlaib tweeted in response to the controversial advertisement and denounced its message.

Rep. Pressley also tweeted about hte sign, writing, "#Racist rhetoric from the occupant of the @WhiteHouse has made hate our new normal. We are still vulnerable."

Allison Outdoor Advertising, the company behind the billboard, have now announced it will be coming down and replaced with a new one.

Salesman Danny Coleman said Wacholz changes the signs on that particular billboard every three weeks, all political in nature. This latest edition had been up since Tuesday.

"It broke our hearts that hte controversy happened," he said. "Freedom of speech is a right. Unless it is something illegal or offensive, we use our best judgement and let it go."

He added, "I wish it hadn't happened I didn't want to hurt anybody. I hope that we can heal from it and people can forgive."