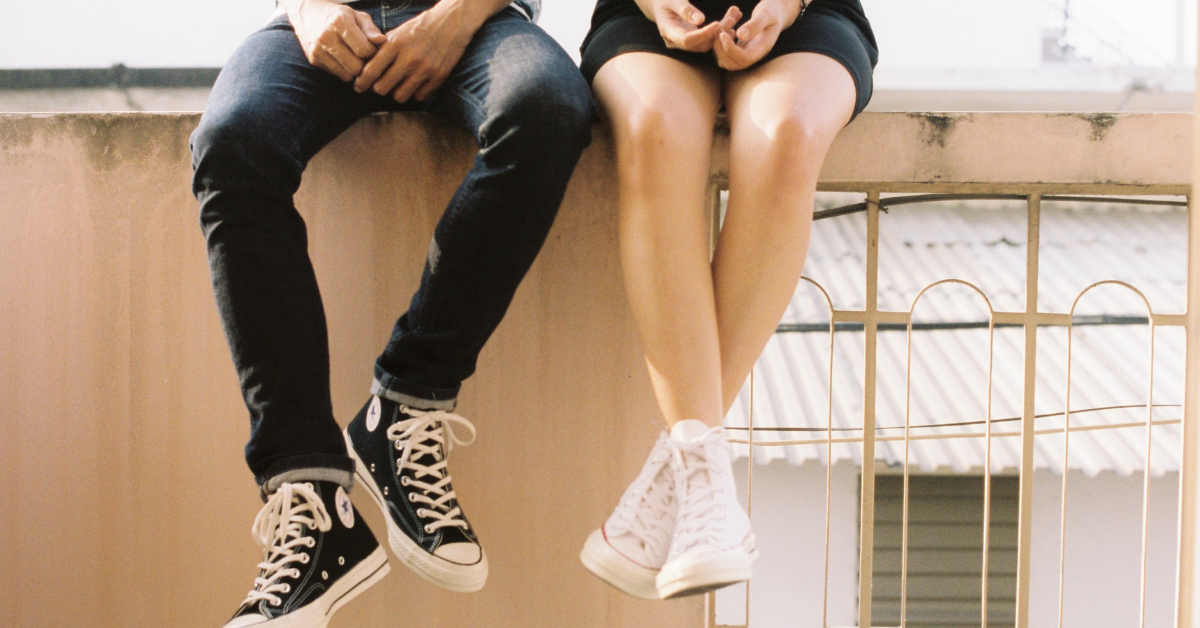 The history of womankind is plagued by patriarchal oppression — men who've long held political power, social privilege, and basic rights that women had to quite literally fight to earn themselves.

Despite the fact that it is now 2019, society isn't as equal between the genders as you'd think it should be. Men still hold the majority of political power (we still haven't had a female president), in some workplaces they still earn more than women, and they're still telling us what we can and can't do with our own bodies.

After hundreds of years of demanding to be recognized as equal, we're still fighting that fight.

One Twitter user created a thread in an effort to help everyone, though men in particular, understand how sexism works. 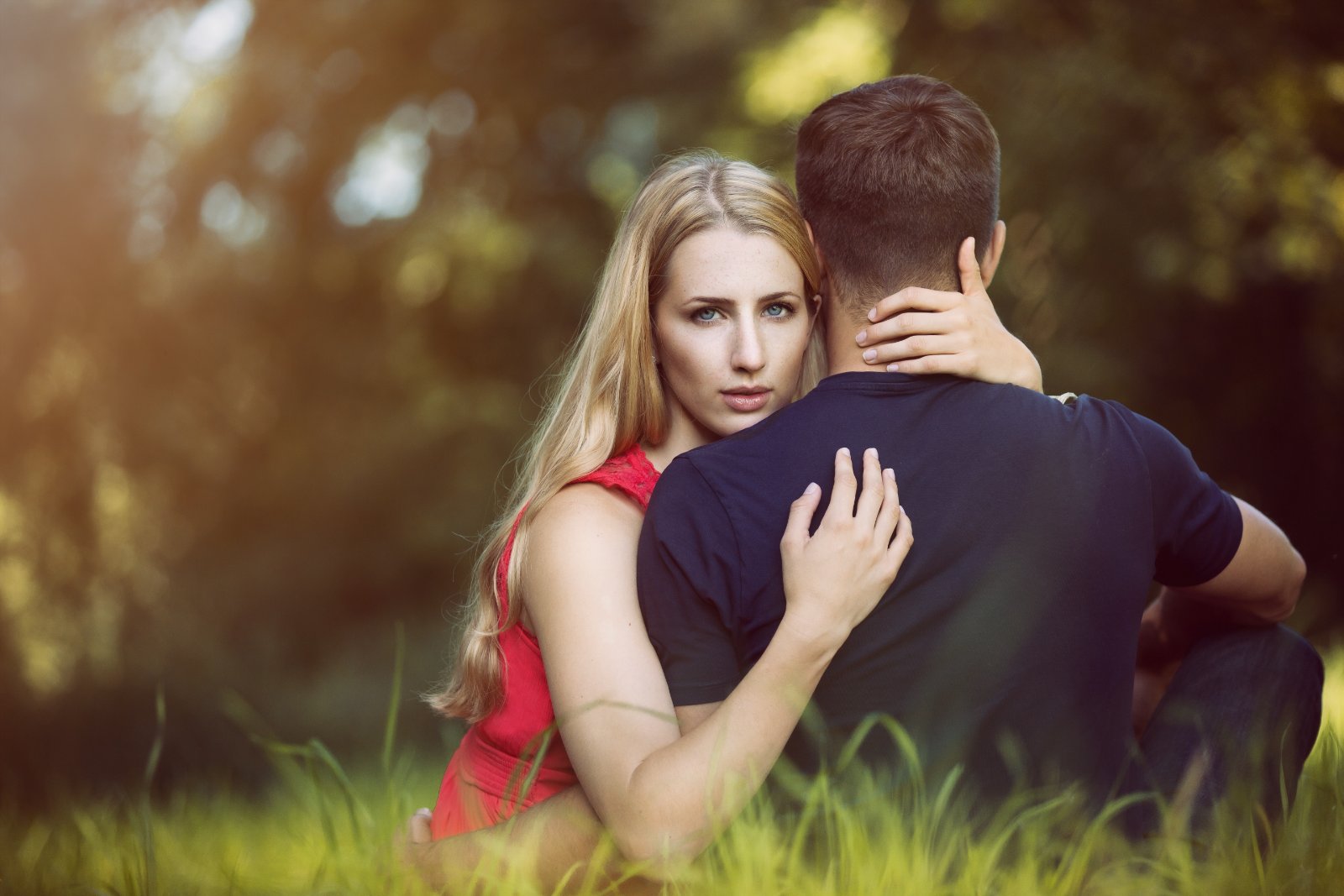 But user A.R. Moxon didn't simply tweet out a brief history on sexism in our world. Instead, he decided it would be much more poignant to reverse men and women's roles throughout history and propose a theoretical future in which men must now experience the same oppression women have.

First, he proposed an America where women hold all the political power.

The concept of "identity politics" is definitely worth noting here. Men who insist on coloring something "identity politics" must not understand that the whole reason white male men have always dominated political positions in America is because they excluded all other identities from these positions of power.

Next, Moxon turned his attention to the Supreme Court and its male-dominated history. 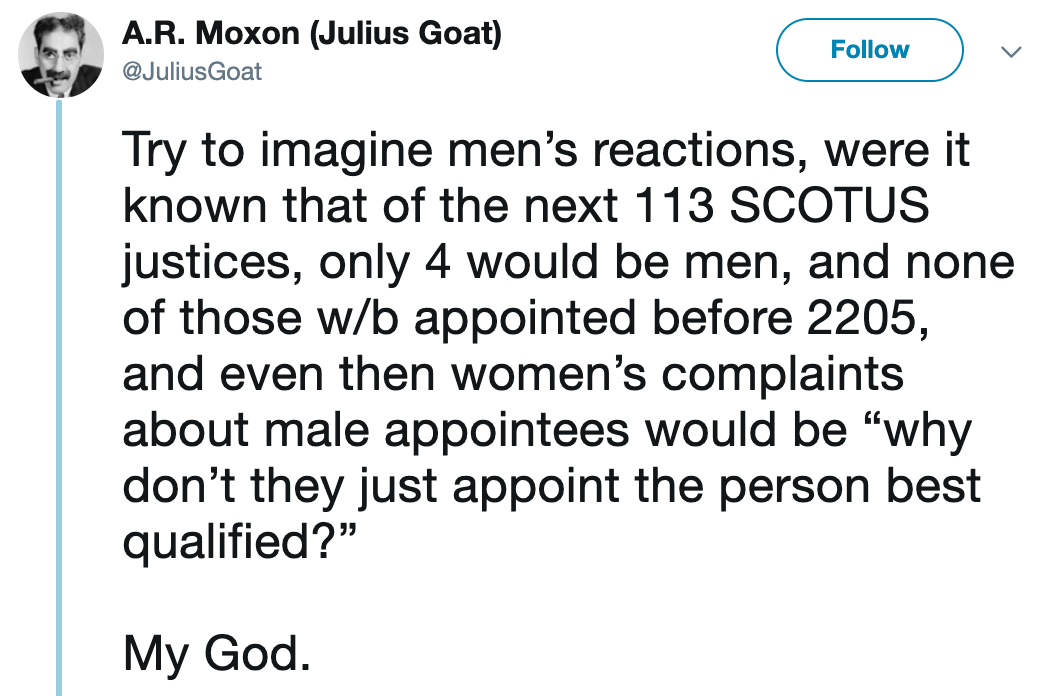 Only four out of 113 Supreme Court justices would be male in this alternate universe, which I'm sure is just unfathomable to some men out there.

(But low-key, just imagine how much we would get done with over 100 years of strictly females ruling the Supreme Court.)

He didn't just reverse gender roles when it comes to political posiitons, though. 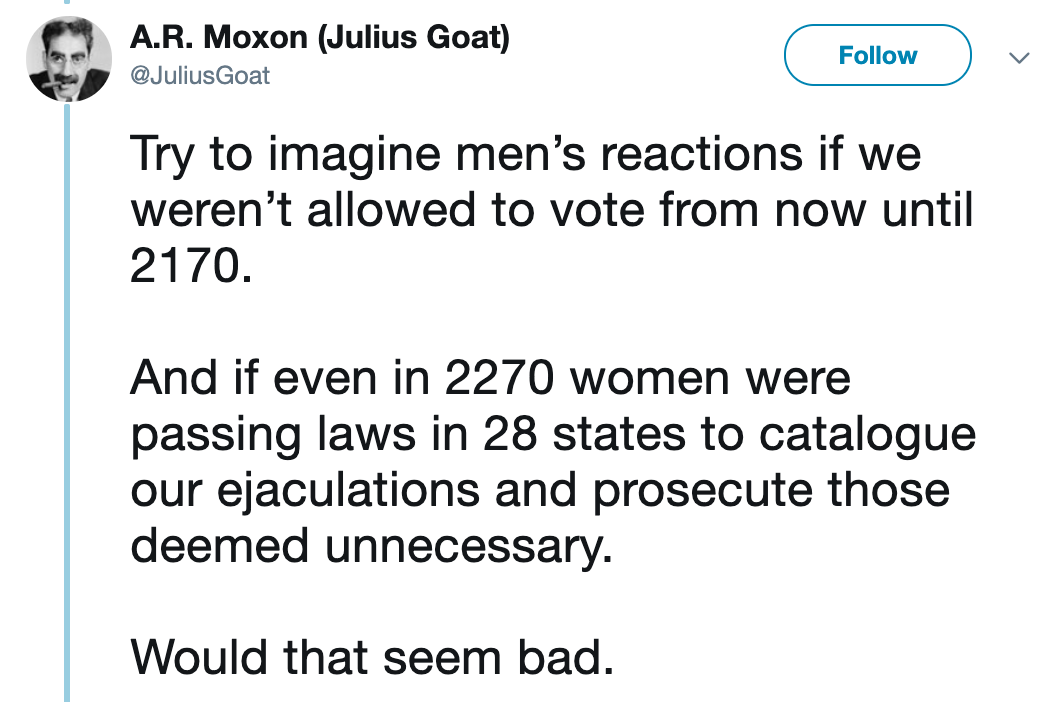 American women won the right to vote in 1920, and women of color earned that same right years later with the Voting Rights Act of 1965. Now, what if it was men's turn to have to fight for the right to vote their opinion on who would govern their society?

And also, let's take a moment to applaud Moxon for including the ways in which women's bodies have been regulated by the government and are still being regulated, a reality I'm sure most men would find outrageously wrong if the roles were reversed.

Next up: education, because that's another big area men have historically dominated. 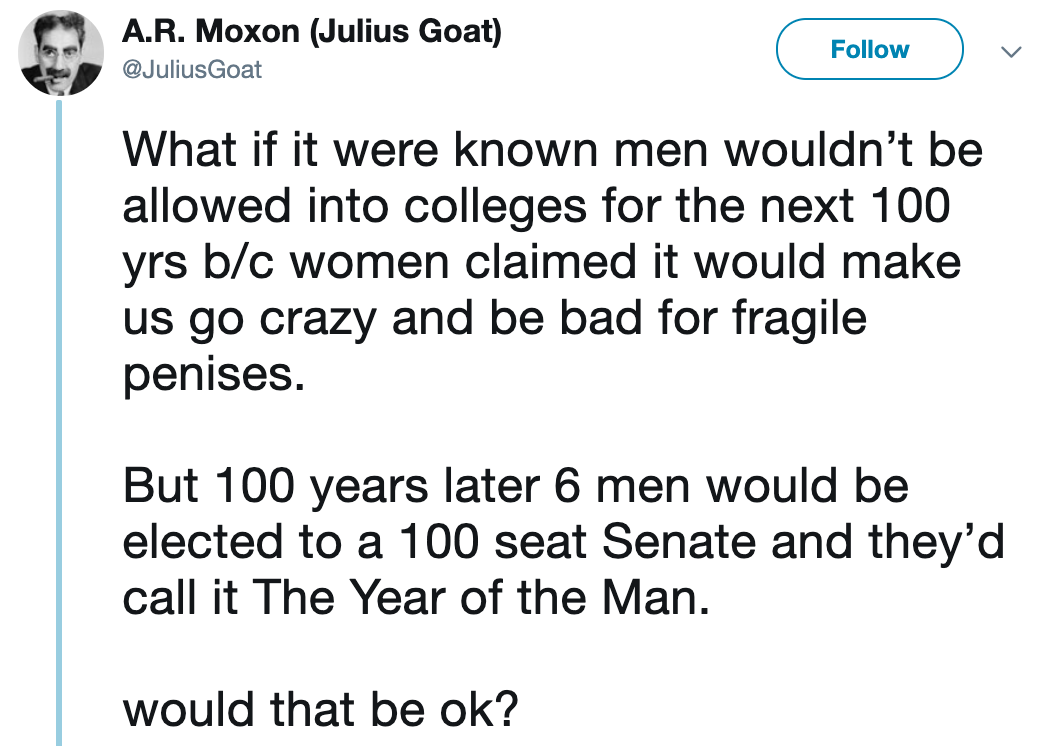 Being denied higher education is absolutely ridiculous but it's even more ridiculous when you think about men's reasoning for excluding women from reaching this level of education.

So how would a man feel if the same were said of him?

Imagine a world where men didn't have any rights at all, unless he was married to a woman. 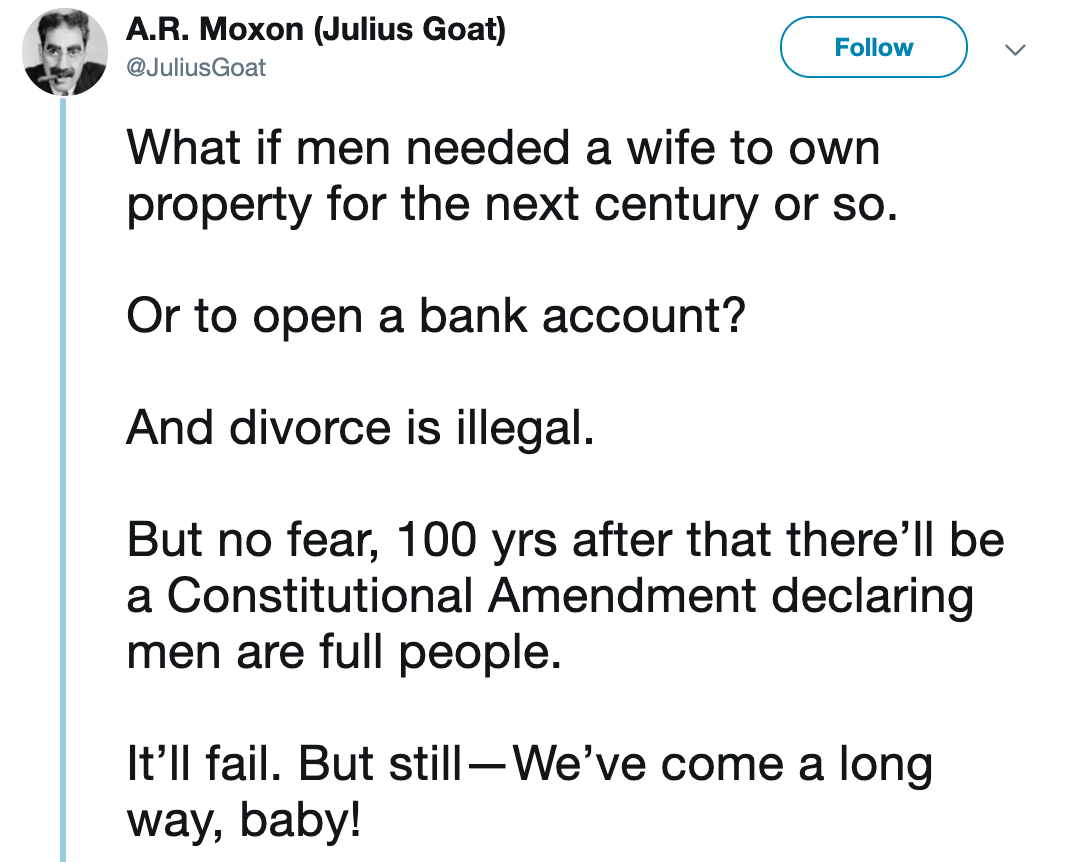 The sad reality of this one is that historically, women's identities, rights, and privileges relied on whether or not they were legally "owned" by a man. You want to buy some land? Not unless your married. Want to open a bank account? You better have a wife to sign the papers for you.

And I hope you married a good, kind woman because divorce isn't legal yet.

Let's hop back over to the world of politics for one final gender-reversal scenario that should really hit home. 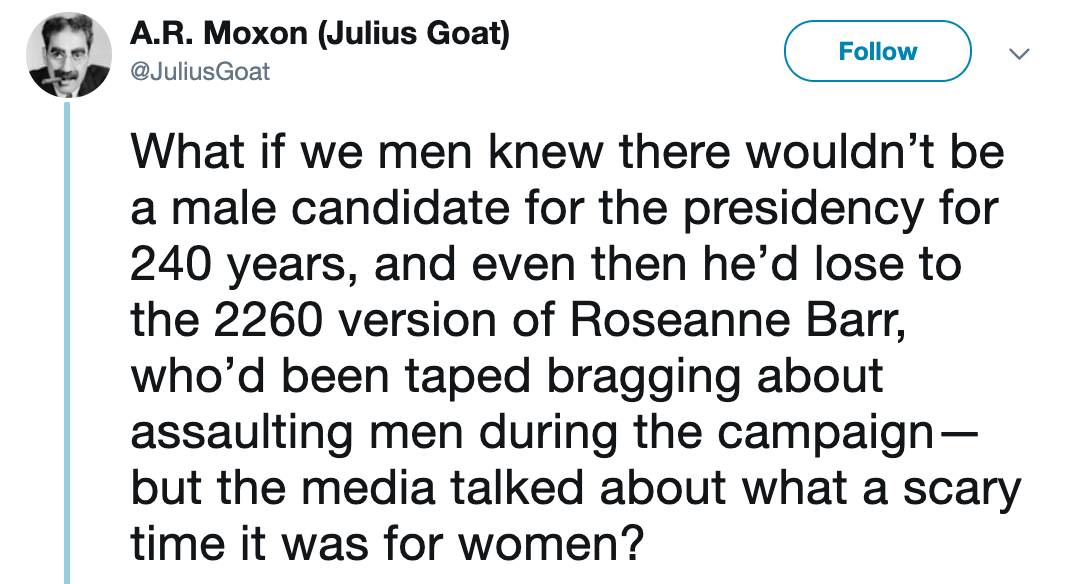 There's nothing I can really say to add to this one, except of course that there's never been a more perfect gender-role reversal example.

At the end of the thread, Moxon admitted that these hypotheticals are "insane" and would "never happen." 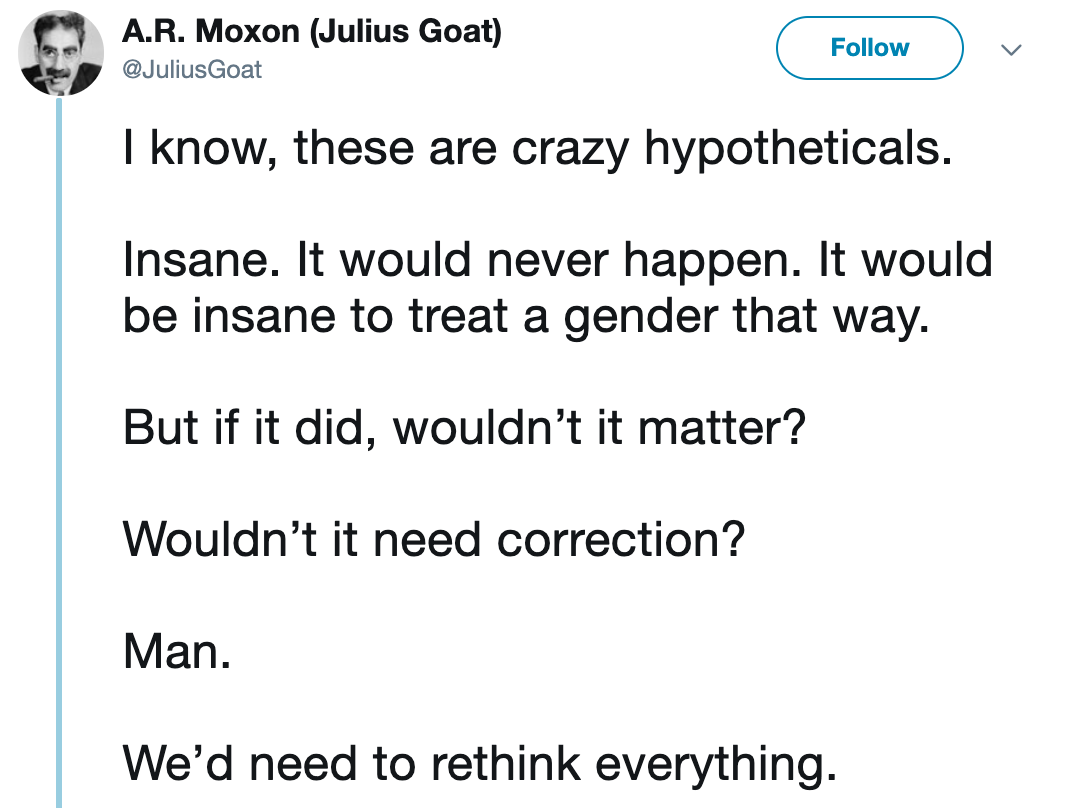 Because wouldn't that be crazy to treat a gender in such a way?

The reality of 2019 is that women are still largely unrepresented in politics, and men are still passing laws telling us what we're allowed to do with our own bodies. Of course, women throughout history have dealt with much more severe forms of oppression.

But the point to be made here is that the oppression somehow still isn't done.