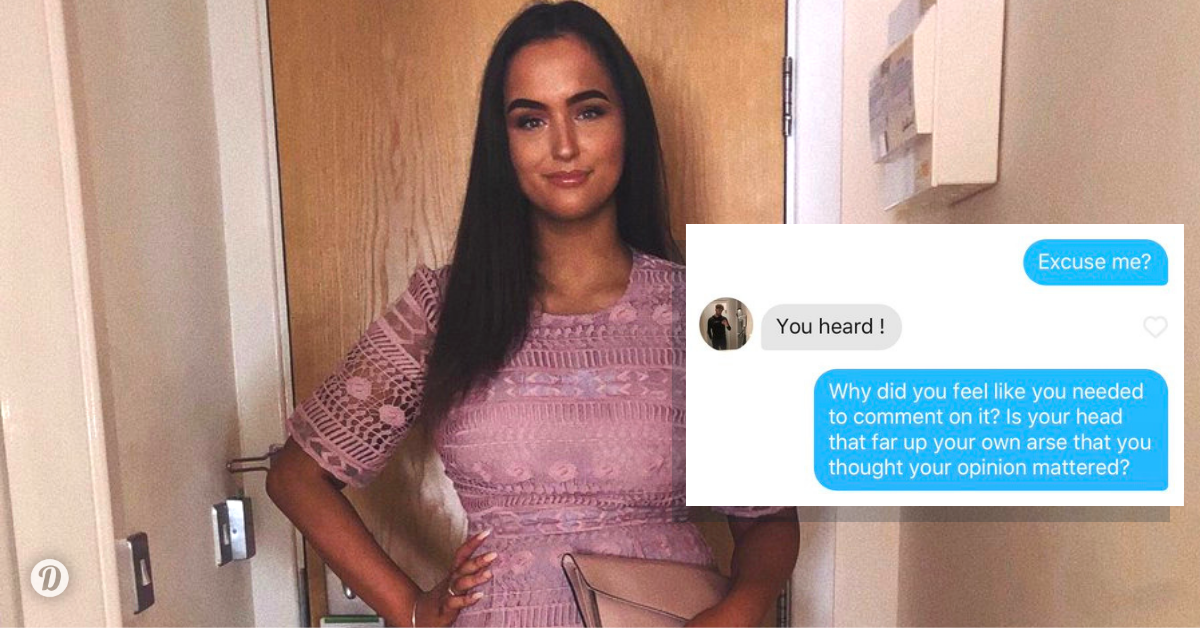 Whether you're eternally single or fresh on the market, it takes guts to risk rejection by putting yourself out there in the dating world. Apps like Tinder make things simpler — but they can also cause hurt.

How should Tinder work? 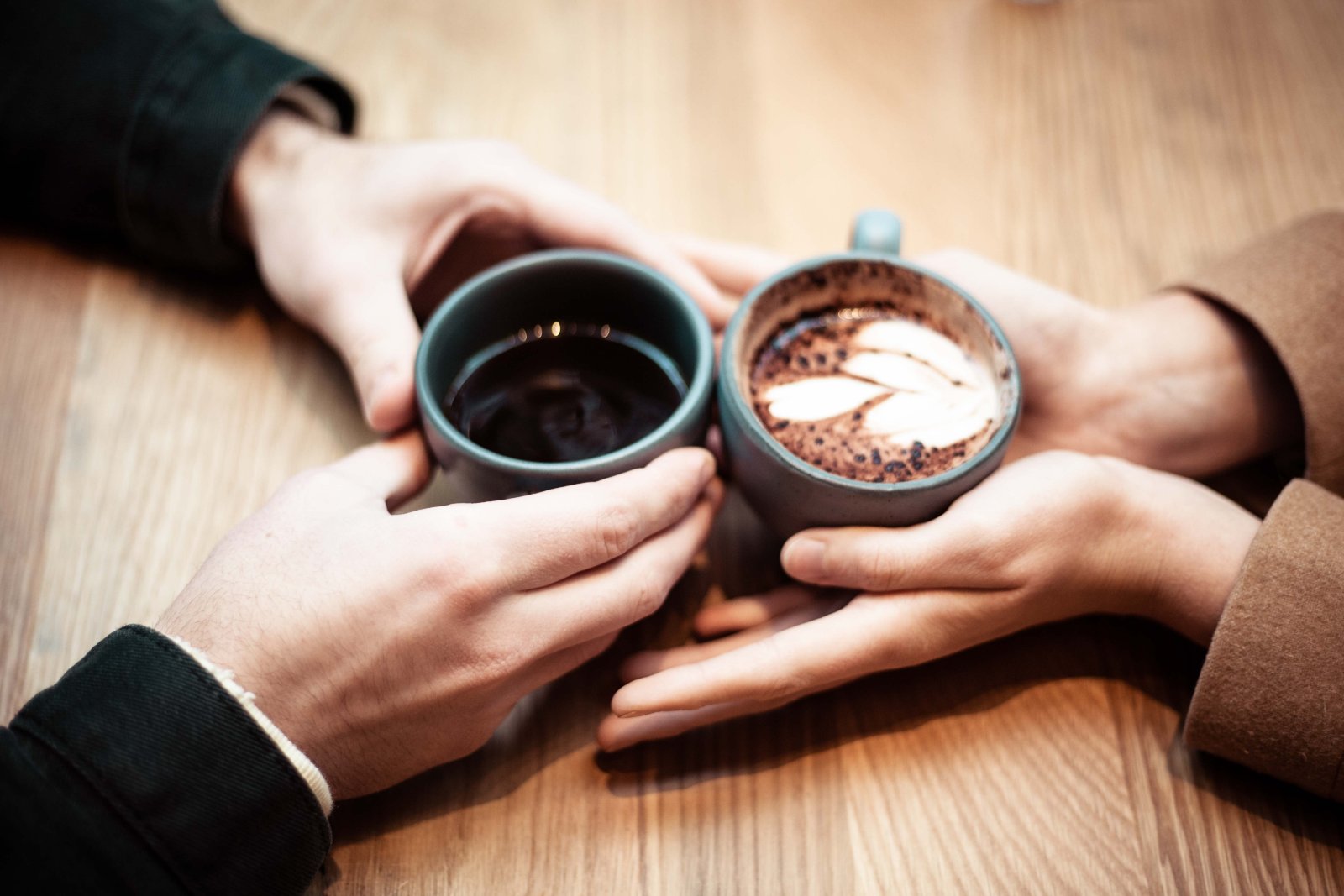 Ideally, you want to find a compatible person and go from there. If they're incompatible, no worries — on to the next one, right? Unfortunately, things don't always go nearly this smoothly.

If you're familiar with the casual dating app, you know it has the potential create meaningful connections. 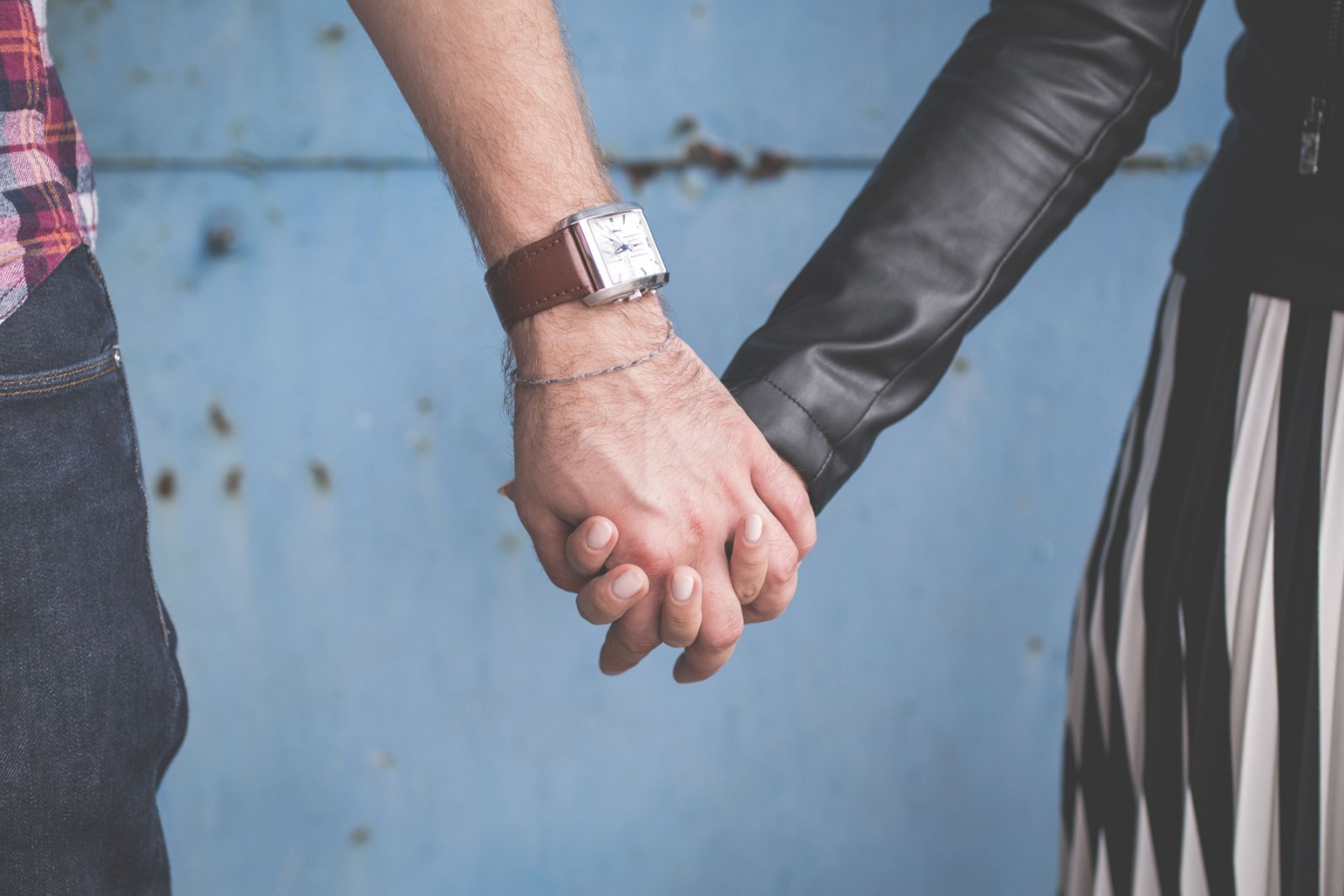 Many people have found their long-term partners on the app! Some have even married their matches. So wild.

However, if you've ever matched with anyone on Tinder, you know the conversations can often be less than cute, even the opposite of flirty.

I've definitely had my own fair share of awful conversations on the app.

Some people really have no idea how to start a conversation.

There needs to be a course on how to properly talk on Tinder.

And some, on the other hand, can't even keep track of who they're talking to.

Is is that hard to look at the top of the screen and check the name? I guess it is.

Like many of us, this student was trying to find a wholesome date on Tinder. 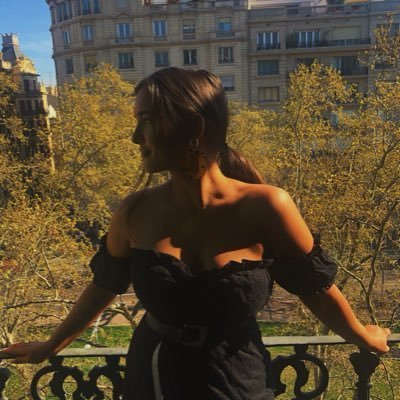 20-year-old Thea Lauryn Chippendale recently shared on Twitter an experience she'd had on Tinder. Her match wasn't compatible, but that was hardly the end of it. Fortunately, Thea handled things like a total boss.

Her match turned out to not be compatible with her, but that was hardly the end of it.

One of Thea's Tinder profile pics featured her in this dress. 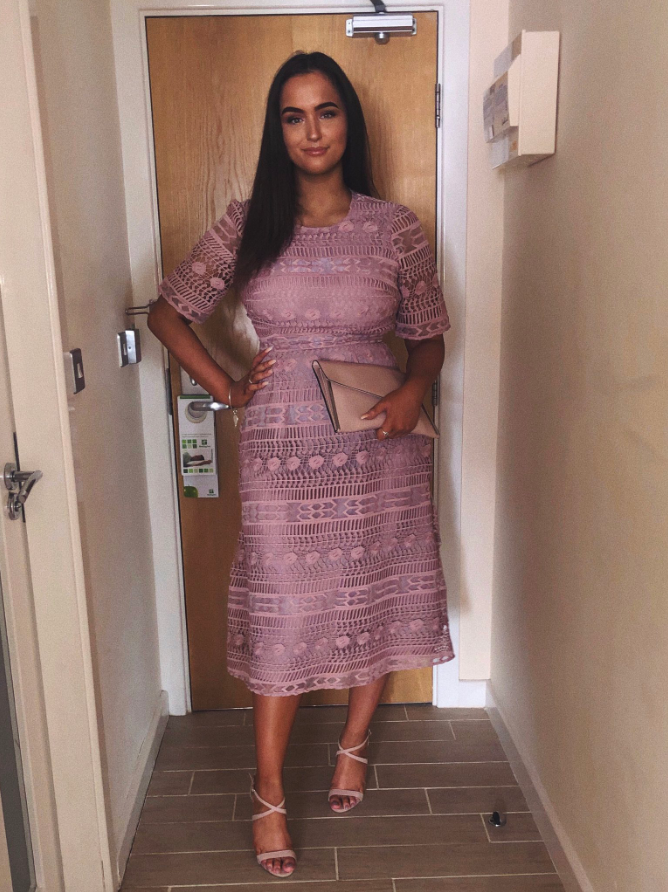 Don't you agree that this outfit would make anyone swipe right immediately?! I know nothing about fashion, but I think it looks...fine?

While, yes, one guy named George did swipe right and ultimately ended up matching with her, he thought he would give her some unsolicited advice.

Some mansplaining about women's outfit choices, if you will.

Who knows where George became a trusted fashion consultant, or why he ended a personal attack with a plea for the person he's attacking to "grow up". 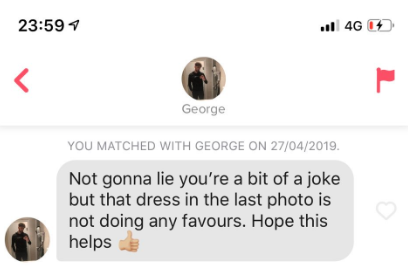 Either way, Thea was seriously unimpressed.

He didn't care that he crossed a line.

We're all taught the basics of civility and manners early on in life, but there's something about these online exchanges that seems to make people lose any sense of decorum.

I'm glad she didn't just ignore his comment and stood up for herself, even if he is a stranger who isn't worth her words.

And of course, she got a sassy reply to her question. 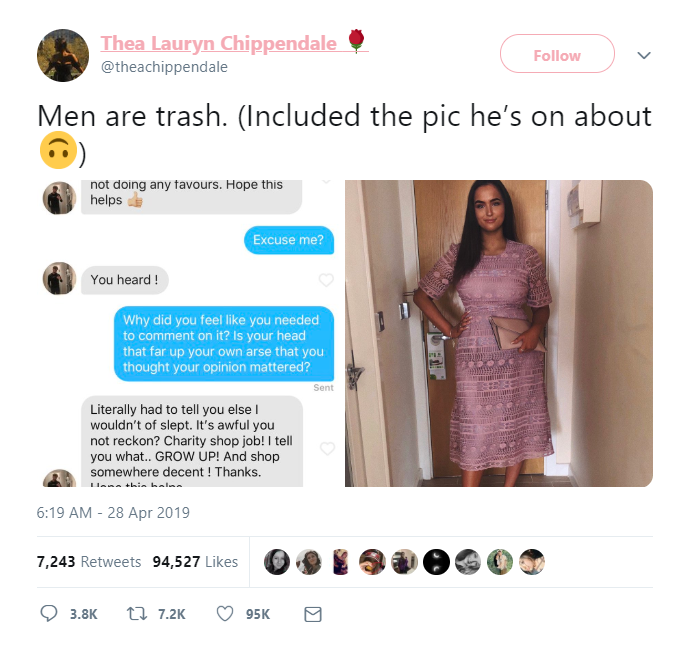 After that particularly unpleasant Tinder exchange, Thea voiced her frustrations with this tweet. Many women who've spent time on Tinder have probably experienced this: incompatibility, followed by a personal insult that's totally uncalled for.

Yes, Thea said "Men are trash". It's pretty obviously hyperbolic, used to draw attention and not to be taken literally. NWA probably wouldn't have gotten much attention with a song called "F*** The Police, But Only the Corrupt Ones, Because There Are Many Good Along With The Bad". 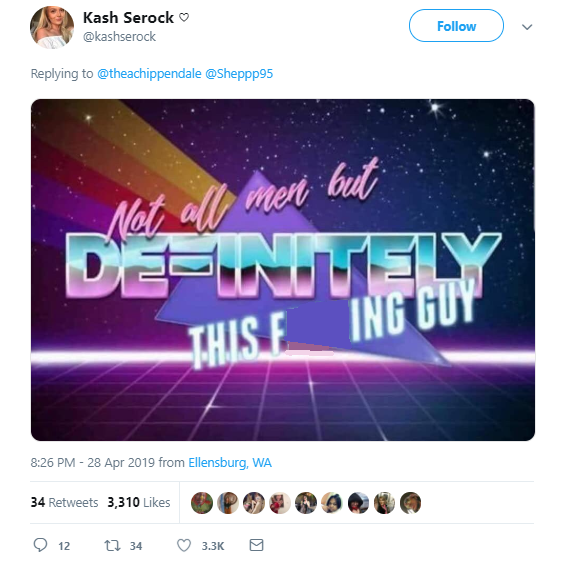 Thanks for getting to the point, Kash. The earlier tweet, with its "not all men" messaging, may have been intended to defend men — but it really only defended the one many who doesn't deserve a defence. 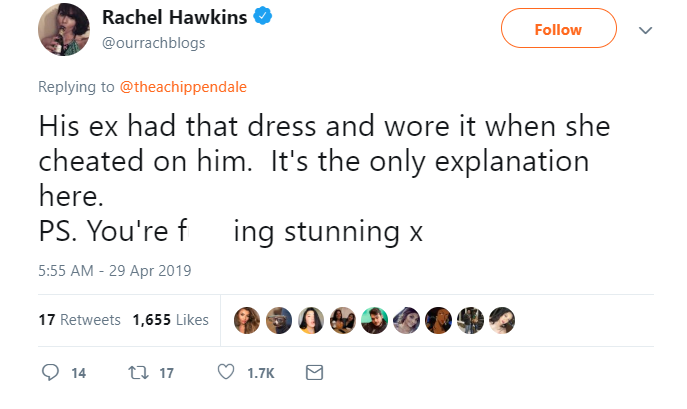 I don't want to see George get his life ruined or anything, but it's too bad there's no Twitter account attached to his Tinder bio. It would be nice to see some of these tweets directed at him.

Nothing wrong with that. 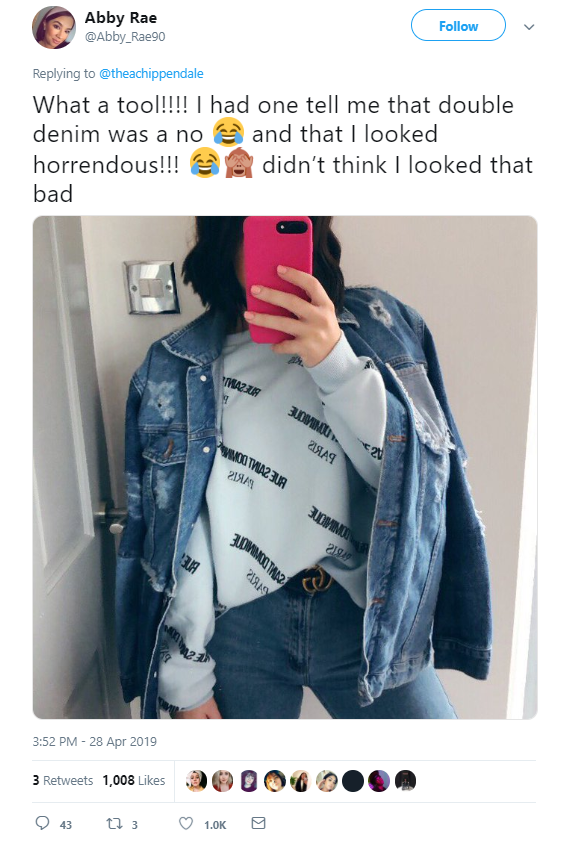 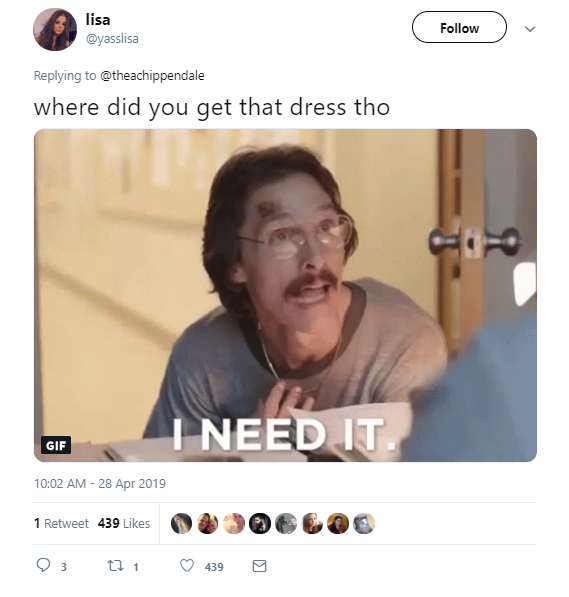 I thought it looked like a perfectly nice dress, and most of the internet seems to agree. It's a shame that George doesn't, because if he did, he might have more matches on Tinder.

Thea got tons of support. 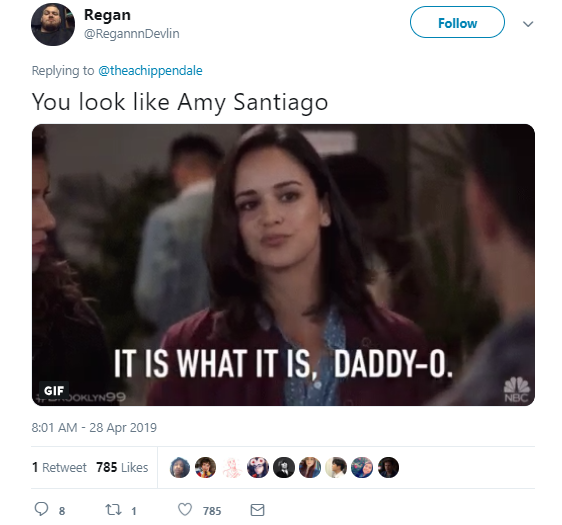 Judging from her initial replies to George, Thea's a self-assured and confident person who has no issues putting someone in their place. Still, little confidence boosters like this probably help as well. 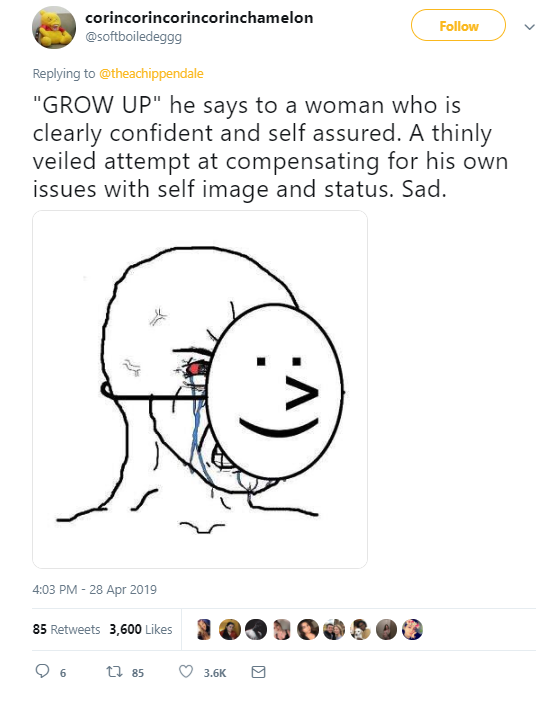 From the original post, I think "grow up" is what stuck with me the most. Oftentimes, it's a retort used by the one person in the argument who actually needs to mature. 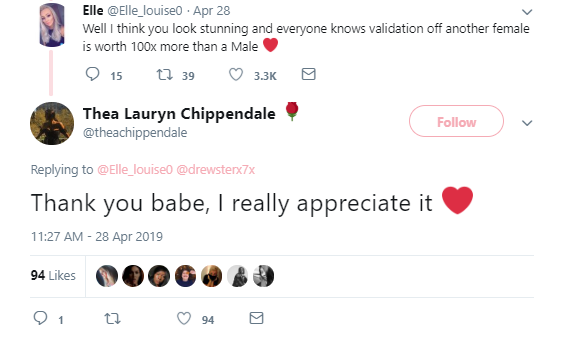 Her tweet garnered tons of responses and spurred some lively conversations, many of which Thea responded to. A nasty exchange might have started this whole thing, but it led to some downright wholesome conversation.

Have you ever done the Tinder thing? 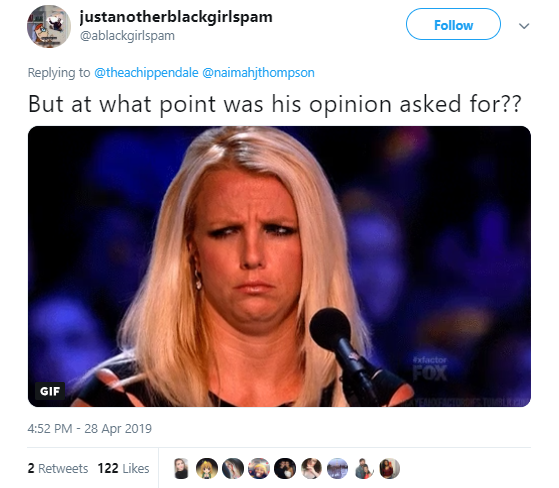 Anyone who's done any amount of online dating probably has a few stories to tell. So whether you're a Tinder novice or veteran, share your tales in the comments section!