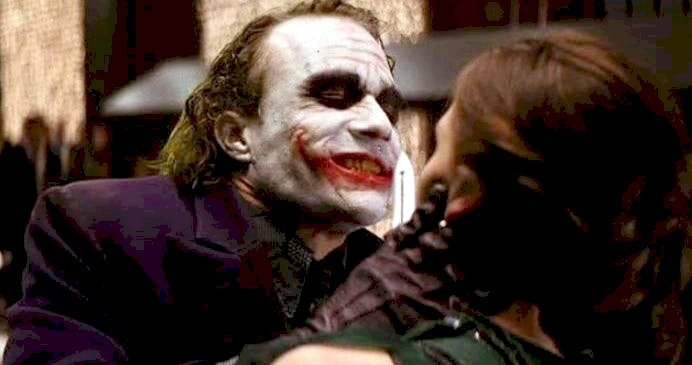 Let's get one thing straight: The Dark Knight is, hands down, the best superhero movie ever made.

Obviously, it's difficult to place Christopher Nolan's cinematic masterpiece within the DC Extended Universe. Still, if we're comparing The Dark Knight to anything DC has put out (or Marvel, for that matter — Captain America: Civil War was great, but it's no Dark Knight), the film rises to the top.

And even in spite of these mistakes, The Dark Knight is still number one. 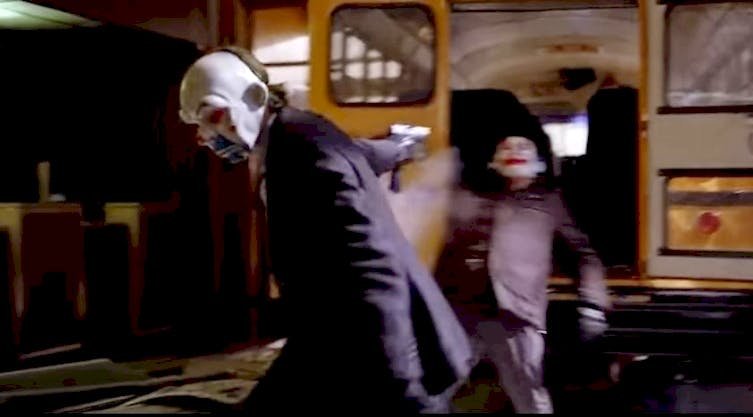 At the start of the film, the Joker robs a bank with a group of masked goons. Obviously, the Joker works alone, even when he's pretending to work with others.

After shooting all but one goon, he has the final guy load the cash into a school bus. He then shoots him, too, right behind the bus.

A few moments later, the Joker walks back to the bus, and the body has completely disappeared.

Well, that was convenient! No need to step over any dead thieves on your way out, eh Joker?

2. Earlier, as the Joker's heist begins, the camera focuses in on a glass building, and then a window breaks. 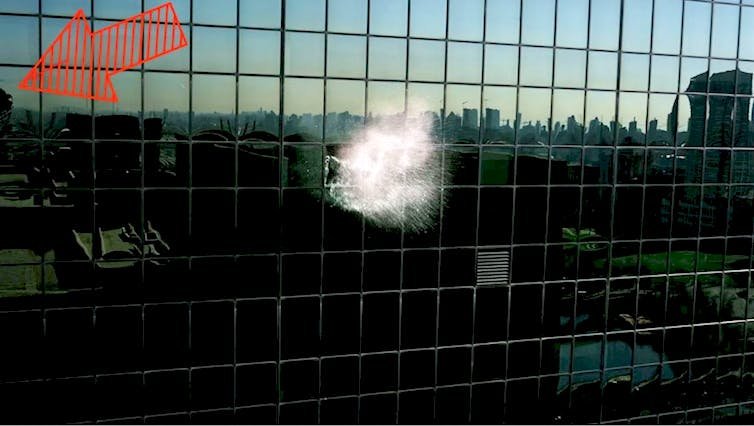 And if you look to the far left, you can just barely see a helicopter (with a camera attached) reflected in the building.

So close, guys! So close.

3. Following that scene, a couple of the previously mentioned goons zip-line out of the window onto another building. 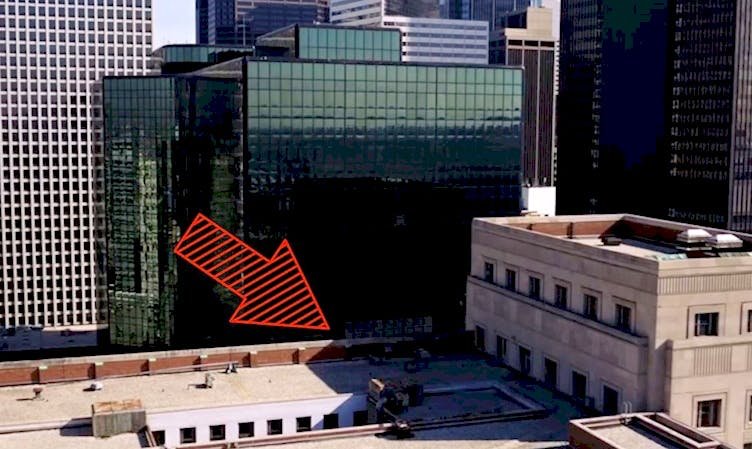 As you'll notice below, there's a pretty big shadow cast upon the building they're headed for.

But when they land on the rooftop (just moments later), there's no shadow at all. 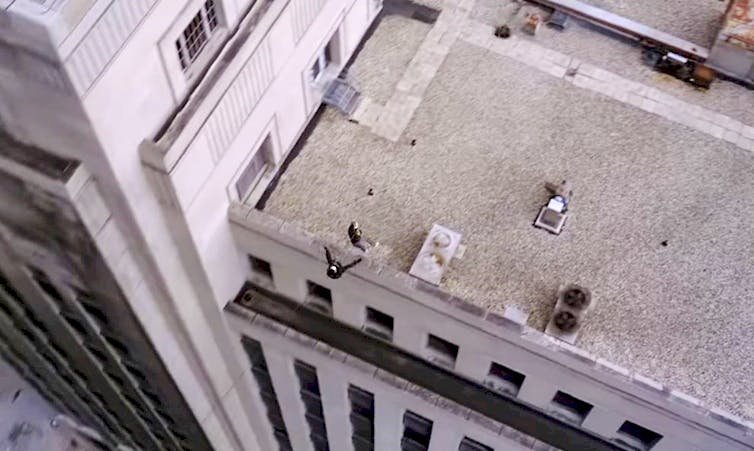 But hey, we understand. Shooting a movie takes a long time, and the sun can be a real pain in the you-know-what for continuity.

4. Also, near the beginning of the film, Lucius Fox meets with Lau on the patio of his office in Hong Kong.

Which is funny, considering the structures in the background are the McCormick Place buildings, which are located in Chicago, Illinois.

5. During the interrogation scene between Batman and the Joker, Batman shoves the Joker into the cell wall.

In doing so, he actually cracks the tiles behind him.

But a few shots later, the tiles are back to normal!

Aw, man! Frankly, though, the interrogation scene is so cool, we have no problem looking past a few cracks (or lack thereof).

6. In The Dark Knight, vehicles have Gotham license plates, which is weird, considering Gotham is a city, not a state. 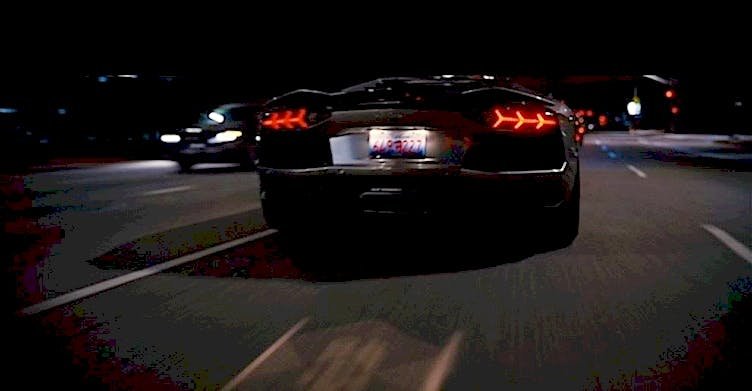 Sure, Christopher Nolan could have created the state of Gotham for the purpose of this film. He can do whatever he wants, as far as we're concerned.

However, Gotham is often considered to be somewhere in New Jersey. Never before has there been a Gotham state. Still, it's hard to say whether this was intended or a mistake.

7. The "sonar vision" used by Batman in The Dark Knight looks nothing like sonar vision in reality.

Specifically, sonar vision could never pick up such small details like shadows, or words on clothing. In fact, the whole concept behind this specific technology used by Batman would be incredibly difficult to pull off.

Then again, that's kind of the beauty if science fiction, isn't it?

Remember when all the mob leaders meet up and discuss plans with Lau, who's on a basic TV screen? Where are the camera and microphone allowing Lau to see and hear the people in the room?

If you want to believe that such a basic TV box has a built-in camera and mic, then OK, live your life.

9. When Batman's in Hong Kong, there's one scene that shows a couple of Chinese security guards talking.

The guards are speaking Mandarin Chinese in a Beijing accent, but they probably should be speaking Cantonese Chinese, based on their location.

10. Admit it: You've never seen a supervillain look so terrifying in an old-fashioned nurse's outfit. 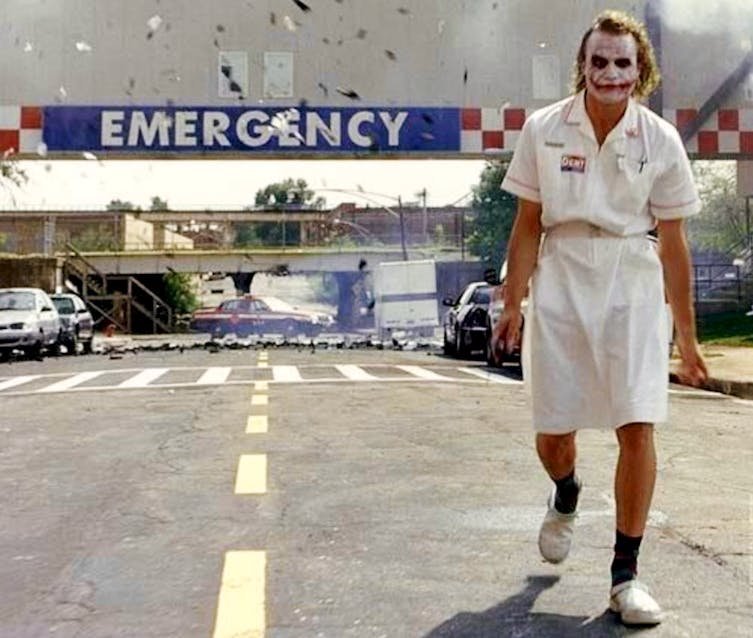 The next slip-up takes place moments after the Joker leaves the hospital...which he blows up.

After leaving, he gets on a school bus. But if you look closely, you can see a cameraman on the bus facing him. 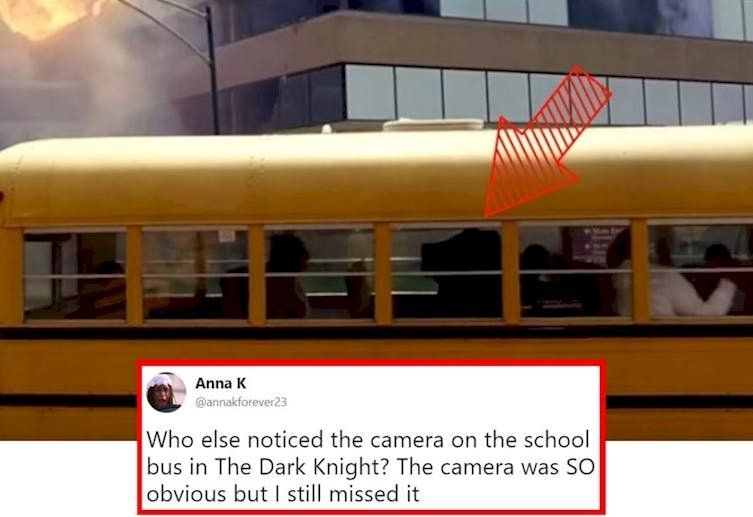 Now, there are reporters who run onto the bus before the Joker gets on through the back.

Obviously, though, none of them had an IMAX camera of that size, nor did we see them set one up.

In fact, we know that Christopher Nolan had originally shot the Joker from that exact angle, but decided to cut it out of the film. 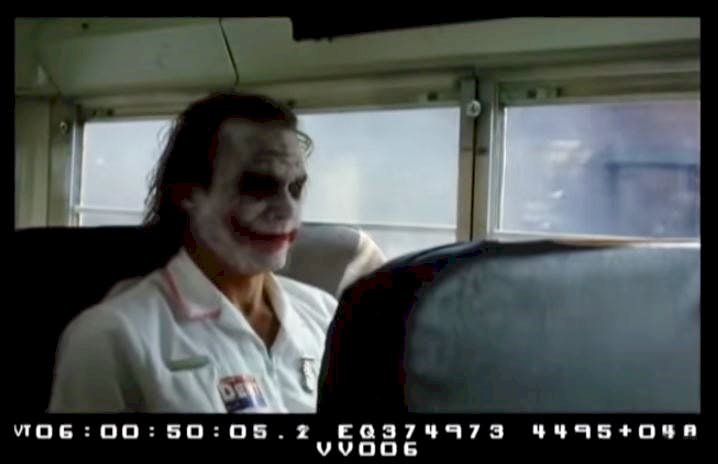 Aha! Proof that there was indeed a set camera placed in front of the Joker on the bus.

But, let's be honest, none of these mistakes take away from the incredibly cool film that is The Dark Knight. 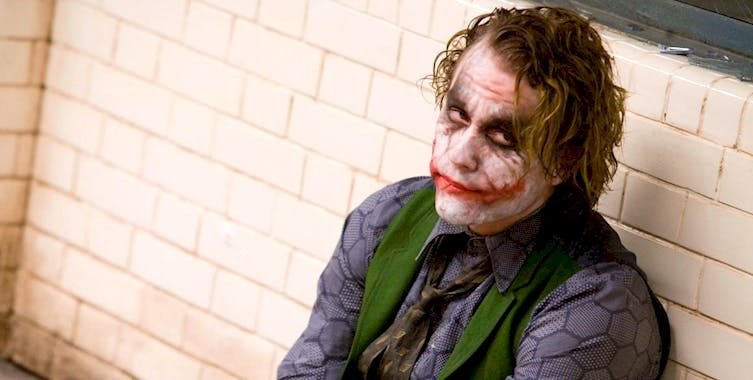 Did you notice other slip-ups in The Dark Knight? Let us know in the COMMENTS!