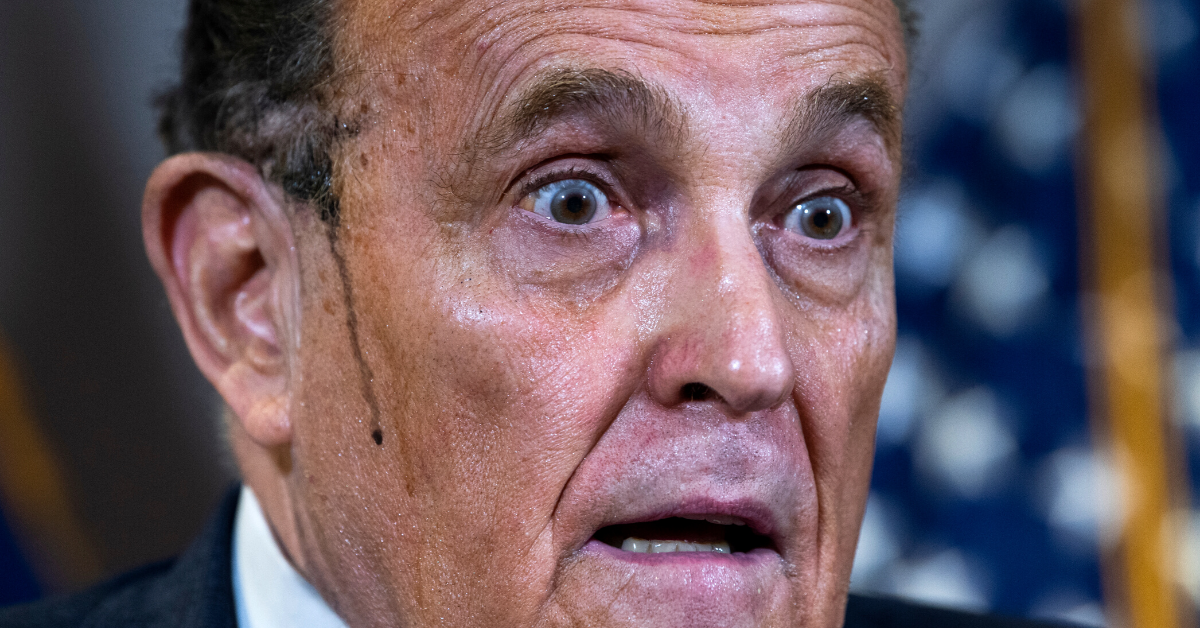 There was a time, 19 years ago, when the entire nation embraced Rudy Giuliani.

As New York City's mayor during the 9/11 attack on the World Trade Center, he proved enough of a steadying influence that he took on the mantle of America's Mayor. Time magazine even named him their Person of the Year in 2001.

If there has been any indication of just how long ago that was — and how far Giuliani has fallen in the intervening years — the month of November 2020 has shown it.

After being caught disgracing himself on camera in the new *Borat* movie and scheduling a press conference at a landscaping company instead of a hotel, it was hard to imagine the month getting much worse for Giuliani.

But there he was on a Thursday afternoon, on another nationally televised press conference — this time at the Republican National Committee's headquarters — shoveling steaming pile after steaming pile of nonsense for his boss, President Trump, as part of a scheme to overturn the election results without any evidence of wrongdoing by Trump's opponents and having lost a slew of court cases around the country.

And as if that wasn't enough, Giuliani started to melt in front of the cameras. At least, that's what it looked like.

It had to be hair dye, right?

Like, what else could leave dark streaks running down Giuliani's cheeks? Well, The New York Times investigated, asking a hairdresser what the deal was — apparently, the expert opinion is that Giuliani touched up his sideburns with mascara or possibly a touch-up pen. Heck, maybe it was shoe polish, who knows?

Either way, nobody was listening to any of Giuliani's wild, evidence-free, completely baseless allegations anymore anyway. Instead, he was in the process of becoming the subject of instant internet ridicule.

And indeed, folks on Twitter laid into Giuliani mercilessly.

The opportunity was just too good to pass up. How often does a literal, physical meltdown accompany a spiritual and emotional meltdown on a national broadcast, anyway?

Of course, the late night wits got their licks in, too.

You knew they would. Material as rich with mockery potential as this doesn't come oozing out of anyone's pores for them every day.

No, really, the International Alliance of Theatrical Stage Employees actually made a good point. As the saying goes, if you think it costs a lot to hire a professional, wait until you hire an amateur.

There were pop culture comparisons by the dozen.

This side-by-side comparing Giuliani with a wounded Zorg, the over-the-top baddie from The Fifth Element played to perfection by Gary Oldman, is just spot on.

But you have to give some credit to the people who saw parallels to Danny DeVito's Penguin from Batman Returns as well. And kudos to the person who dug up a wonderfully obscure King of the Hill reference, too.

Giuliani's facial expressions during the press conference didn't help anything, either.

Well, they helped the folks on Twitter making fun. And it's easy to see why — look at the range there. Photojournalists in the room, give yourselves a gigantic pat on the back for capturing that scene.

As a few folks noted, he's really packed a lot into November.

The best part? It's not even over yet. There are still like 10 days to go. That's plenty of time for Giuliani to step on a few more rakes.

Count on The Onion to cut to the chase, basically summing up where life is at for Giuliani right now.

But then, satire is kind of what they do, all day every day. I mean, it is just hair dye or mascara or whatever, but surely considering all that's happened in the past month, Giuliani's credibility has taken a severe hit.

One has to imagine that such a thorough roasting won't go over well in the Oval Office tomorrow, but who knows, this is 2020 so all predictions are off.