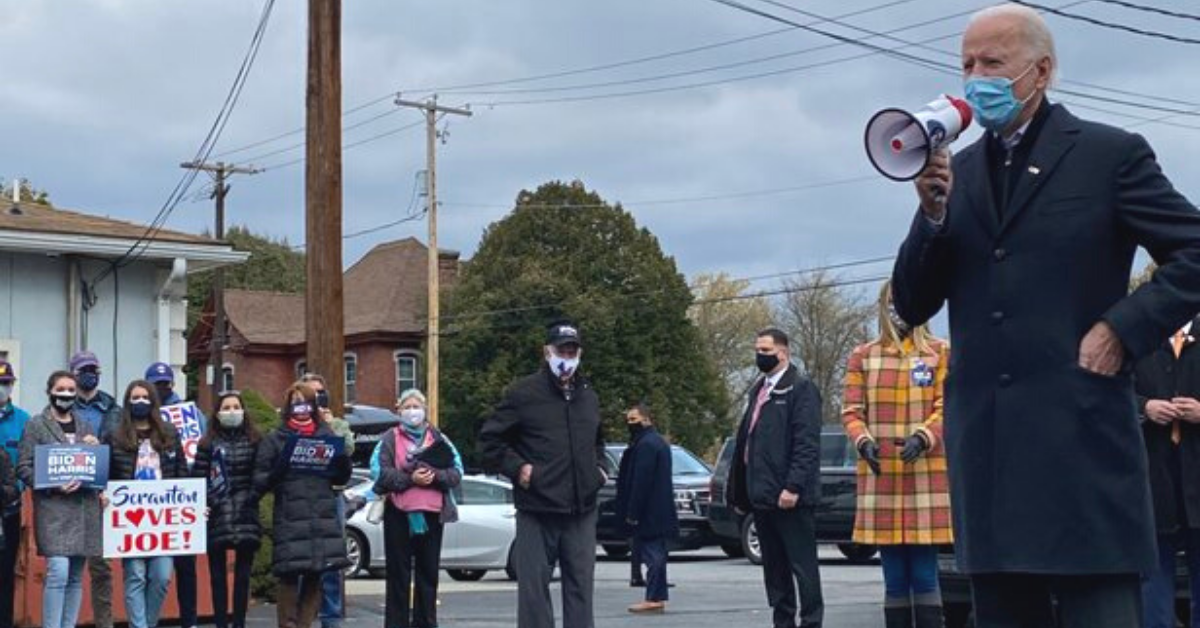 Biden Signs Wall Of Boyhood Home: 'From This House To The White House'

Much has been made of each candidate's origins in the 2020 election. Back in late 2019, President Trump moved his official residence from New York — the city he's been tied to much of his life — to sunny, tax-friendly Florida, and home to Trump's beloved Mar-a-Lago resort.

Meanwhile, at his rallies, the president has also accused his opponent, longtime Delaware resident Joe Biden, of "abandoning" Scranton, Pennsylvania — the town he grew up in — at age 10. Biden's family moved states for the sake of his father's job in Delaware but according to PolitiFact, Biden maintained ties with Scranton for decades afterwards.

And when the 2020 election came along, Biden decided to wind his campaign down where it all started.

In Scranton for Election Day, Biden stopped by his childhood home for a visit.

It's an important stop both emotionally and politically, as Pennsylvania is a battleground state with 20 electoral college votes up for grabs.

President Trump won the state in 2016 by a narrow margin but the last polls out of the state had Biden favored to win by 5 points, according to NBC/Marist.

It's not the first time Biden has been back to his childhood home.

As Politico reported, Biden has stopped at his childhood home in Scranton many times over the years, including a memorable visit on the 2008 campaign trail, when the home's owner invited Biden to sign the living room wall.

In 2020, Biden decided to repeat that, again signing a wall in his boyhood home.

As Axios's Alexi McCammond shared on Twitter, the former VP wrote "From this house to the White House, with the grace of God," and dated it 11.3.2020. McCammond also shared an image of the first time Biden had signed the home's wall.

The home's current owner reportedly told Biden that she watches him "all the time."

"I'm so proud of you," she added, according to The Hill.

Supporters in Scranton turned out to give Biden a warm welcome.

But it won't be his last stop in the state on Election Day. Biden is expected to visit Philadelphia later in the day before returning to his Wilmington home to make a national address.