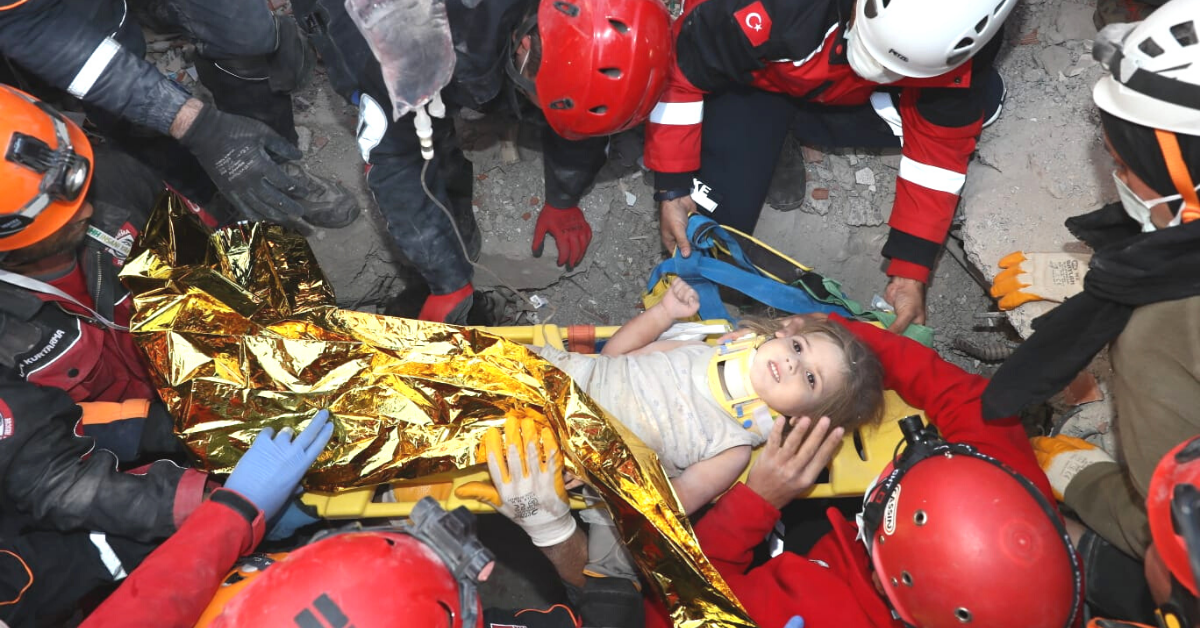 Rays of hope are hard to find after tragedies strike but it's only natural to search for them.

And to be sure, a tragedy befell Turkey when a 7.0 magnitude earthquake struck Izmir, the nation's third-largest city, on October 30. As NBC News reported, the quake is known to have killed 105 people so far and injured more than 1,000, so any rays of hope would be more than welcome for residents.

Those holding out for a miracle were rewarded when a three-year-old girl was rescued from the rubble 91 hours after the quake struck.

Rescuers heard a scream from the rubble, alerting them to the girl's presence. She was found huddled behind a dishwasher in the remnants of a kitchen and the nation watched rescuers pull her from the rubble as it was broadcast on live TV.

Ayda was apparently uninjured by the quake.

Ayda was reportedly in good spirits despite her ordeal and asked rescuers for her favorite meal as she rode in the back of an ambulance, according to NBC News. "We'll get you Köfte and ayran," the man next to her said in a video, referring to a traditional meatball dish and a drink made from yogurt and water.

Her rescue was celebrated by both crowds in Izmir and authorities on social media. Turkey's president, Recep Tayyip Erdogan, tweeted "Ayda, this was a miracle ... Thanks be to Allah for giving us new hopes with your smiling eyes after 91 hours. Get well soon, beautiful child."

Ayda isn't even the first miraculous rescue since the quake struck.

A day earlier, another three-year-old girl and a 14-year-old were also rescued from collapsed buildings.

The older girl, Idil Sirin, was trapped for 58 hours before her rescue, and Elif Perincek was pulled out 65 hours after the quake, a full two days after her mother and two sisters had been rescued.

Indeed, rescuers have been busy and successful since the quake struck.

According to Turkish news outlet Andalou Agency, Ayda was the 107th survivor rescuers have dug out from quake wreckage so far.

Searches of collapsed buildings in Izmir are ongoing, a process made more perilous by continuing aftershocks. Turkey has reported more than 1,460 aftershocks since the 7.0 quake, including 44 above a 4.0 magnitude, Al Jazeera reported.