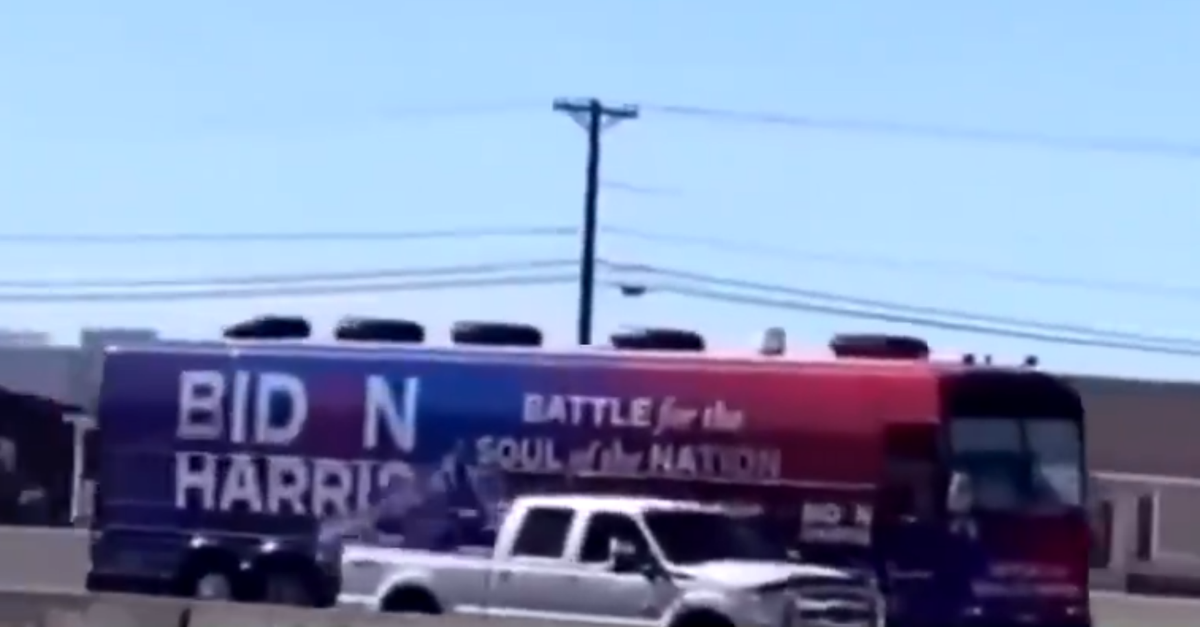 Whether it's from the candidates themselves or some voters who have seen it all, you've likely heard many times by now that the 2020 presidential election is the most important one we've seen in our lifetimes.

Whether it's the "soul" of the nation or American democracy itself, it's clear that much is riding on this election's outcome as it will determine how the country deals with one of the hardest periods in its history.

And with NBC News reporting that state officials throughout the country are coming up with new counter-measures and voter intimidation hotlines to ensure militias can't influence voters by force, it's clear that this election is also an unusually tumultuous one.

And as we're about to see, that tumult isn't helped when a candidate's supporters aren't taken to task for crossing the line.

On October 30, a Biden campaign event in Pflugerville, Texas was canceled after a campaign bus was surrounded by trucks on I-35 between Austin and San Antonio.

As CBS News reported, these vehicles were adorned with Trump signs and flags.

These trucks reportedly tried to slow the bus down and run it off the road and at least one truck was captured sideswiping a Biden volunteer vehicle.

The bus was eventually escorted to its destination by local law enforcement.

While the footage was shocking on its own, Twitter users were also disturbed by President Donald Trump's apparent support of the surrounding vehicles.

As you can see, he responded by tweeting a video of the incident set to Tech N9ne's "Red Kingdom" and writing the caption "I love Texas!"

It's worth noting that the song in question is about the Kansas City Chiefs NFL team and has nothing to do with partisan politics.

As CBS News reported, Trump also made the puzzling claim that the drivers involved were protecting the Biden bus, which is not indicated by any actual footage of the event.

For critics, this tweet came off as an endorsement of violence against Trump's political opponents.

As we can see, one user called for the company behind Twitter to hide Trump's tweet, as the BBC reported them as doing in the case of a May 29 tweet by the president that was hidden for "glorifying violence."

For one Texan, this was apparently the final straw that ended her support for Trump shortly before Election Day.

As she saw it, the incident provided an opportunity to reconsider what behavior she was willing to accept from her candidate. Clearly, it wasn't this.

Another user called on voters to undergo a similar self-reflection as the election proceeds in its home stretch.

To those considering voting for Trump, this person asks them to think about what they gain from not holding the president and his supporters to a responsible standard.

Of course, this isn't to say that Trump's supporters didn't have statements of their own to make on Twitter.

However, they largely seemed to dispute who was at fault during the collision between the white SUV and the truck with the Trump flags, rather than discuss the wisdom and ethics of the incident at large.

When this topic did come up, tweets tended to coyly frame it as a "sweet" attempt to "escort" Democratic candidates out of Texas.

Yet not only was both the incident and Trump's apparent support of it no laughing matter to many users, but one saw a disturbing parallel to the past.

For this person, incidents like these make the talk about democracy itself being at stake in this election seem all the more real.

Others, however, simply chose to tell Trump directly what they thought of his tweet.

For this person, it was irresponsible for the president of the United States to treat an incident that potentially endangered lives with anything other than condemnation.

Nonetheless, this backlash didn't seem to change Trump's mind and he released another tweet on Sunday reaffirming his support for the drivers involved.

As CBS News reported, this was in response to reports that the San Antonio office of the FBI has launched an investigation into the incident.

After referring to the drivers as patriots who "did nothing wrong," he went on to suggest the FBI's attention was better directed elsewhere.

It's worth noting that research has found that 95% of the protests in the wake of 46-year-old George Floyd's death were entirely peaceful.

In any case, it seems that President Trump is standing by the Biden bus incident, which is unlikely to make those horrified by it any less concerned.