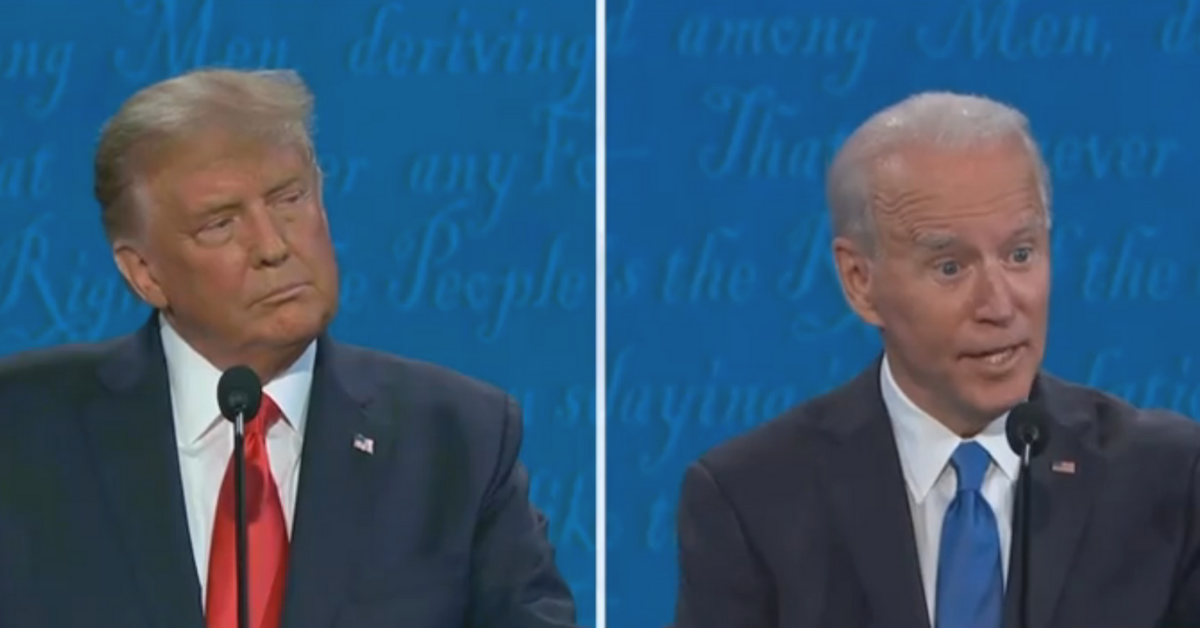 Biden Says He'd 'Shut Down The Virus, Not The Country' In Final Debate

After a contentious first debate marked by repeated interruptions and outbursts from the president, all eyes were on the second and final debate between President Trump and former Vice President Joe Biden.

With those interruptions throwing the first debate off the rails, the debate commission determined that for the second debate, each candidate's microphone would be muted for a two-minute period during the candidate's initial response to a question from debate moderator Kristen Welker.

With fewer interruptions, the candidates had a much easier time getting their points across to the audience tuning in.

And, as expected, right out of the gate, the first question posed to the candidates involved the COVID-19 pandemic and how each would lead the nation through the next phase of the pandemic — and the candidates' responses were starkly contrasted.

Defending his administration's initial response, President Trump tried to remain upbeat, repeating the same mantra he's been saying for months: "It will go away."

"As I say, we're rounding the turn, we're rounding the corner. It's going away," he said, despite surging cases. On the day of the debate, the U.S. established a new record in confirmed cases of the virus for a single day with more than 77,000, NBC News reported.

President Trump also tried to strike an upbeat tone regarding a possible vaccine for the coronavirus.

He suggested that a vaccine would be ready "within weeks," although all vaccines under development are still in trials and require much more study to be proven both effective and safe enough to be approved for use by the FDA.

When pressed, President Trump did acknowledge that he couldn't "guarantee" a vaccine within weeks, but said he hoped it would be available by the end of the year.

Nevertheless, vaccine or no vaccine, President Trump reiterated his determination to not require any more stay-at-home orders for the sake of the economy, measures that some European nations have taken again as case numbers there have spiked recently.

"We can't close our nation," the president said. "We can't lock ourselves up in a basement like Joe does."

Biden countered with a much bleaker outlook than President Trump.

The former Vice President suggested the nation was in for a "dark winter," pointing to the 220,000+ who have already died as a result of COVID-19 in the U.S. as a reason not to trust President Trump with any further pandemic response.

While the president said that Americans were "learning to live with" the virus, Biden countered that "we're dying with it."

"Anyone who's responsible for that many deaths should not remain as President of the United States," Biden said.

Pressed for his own plan to deal with the virus, Biden laid out several measures.

He suggested establishing national standards for opening schools and businesses, providing stimulus funds to help prepare them to open, and refuted President Trump's vaccine timeline, noting that public health experts have said that "there's no prospect that there's going to be a vaccine available for the majority of the American people before the middle of next year."

And while Biden has previously stated that he would consider more stay-at-home orders or lockdowns if recommended by scientists, he tried to strike a more balanced approach in the debate, saying he would "shut down the virus, not the country."

Biden did notably try a more unifying approach than the president.

With President Trump laying blame at the feet of Democratic governors around the country for high case numbers and deaths, Biden took aim at his angle.

"I don't look at this the way he does," Biden said, "blue states and red states. They're all the United States." Noting that recent spikes have been popping up in states with Republican governors, Biden added that "They're all Americans."

What did you think of the debate? Let us know in the comments!