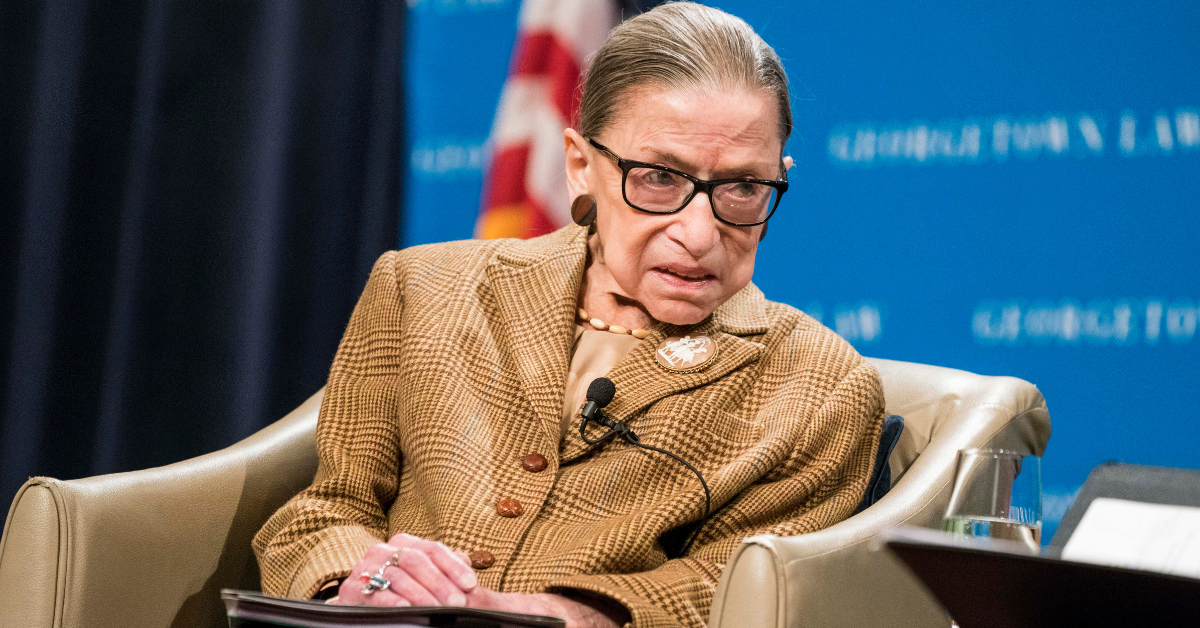 Ruth Bader Ginsburg, legendary trailblazing Supreme Court justice, liberal icon, and the second female to ever serve on the nation’s highest court, has died at the age of 87.

On Friday night, the Supreme Court released a statement announcing Ginsburg's passing. Soon social media became flooded as tributes to the "Notorious R.B.G." poured in from political figures, celebrities, and everyone else whose lives had been touched by the pioneering justice.

In that statement, he dubbed the late justice a "titan of the law" and praised her for her "brilliant mind."

"[...] Justice Ginsburg demonstrated that one can disagree without being disagreeable toward one's colleagues or different points of view...May her memory be a great and magnificent blessing to the world."

Former President Barack Obama also took to Twitter to pay tribute to the late justice and included a link to his statement regarding how she wanted her legacy to be honored.

In that statement, the former POTUS calls on the Senate to delay naming Ginsburg's successor until after the 2020 election, and urges Republicans to "apply rules with consistency, and not based on what's convenient or advantageous in the moment."

He also referenced the justice's "instructions for how she wanted her legacy to be honored," which Ginsburg relayed to her granddaughter, Clara Spera. Her "most fervent wish" was that she wouldn't be replaced "until a new president is installed."

Jimmy Carter praised Ginsburg as a "beacon of justice" and a "powerful legal mind" who he was "proud to have appointed... to the U.S. Court of Appeals in 1980."

Bill Clinton tweeted a photo of himself and Ginsburg as she addressed an audience at the time of her nomination to the Supreme Court in 1993, writing, "Ruth Bader Ginsburg’s life and landmark opinions moved us closer to a more perfect union."

George Bush's statement applauded Ginsburg's "pursuit of justice and equality," adding that "she inspired more than one generation of women and girls."

Hillary Clinton released her own tribute to Ginsburg where she thanked her for "[paving] the way for so many women, including [herself]."

"There will never be another like her," Clinton continued. "Thank you RBG."

House Speaker Nancy Pelosi tweeted to say, "Every woman and girl, and therefore every family, in America has benefited from [Ginsburg's] brilliance."

Bernie Sanders paid tribute and said she will be remembered "as one of the great justices in modern American history."

Former Vice President and current Democratic presidential nominee Joe Biden praised Ginsburg as a "giant of legal doctrine", adding, "May her memory be a blessing to all people who cherish our Constitution and its promise."

"A profound and fearless advocate for women, equality, and justice, Ruth Bader Ginsburg's impact will undoubtedly be felt for generations," he wrote on Friday night.

French President Emmanuel Macron tweeted a photo of RBG's mural in Washington D.C., writing, "Her outstanding legacy shall be our inspiration for a long time to come."

"'Women belong in all places where decisions are being made'," Thunberg quoted in her tweet.

Tributes for the late justice also poured in from Hollywood.

Barbara Streisand tweeted, "Ruth Bader Ginsburg you will live in history forever," while comedian Julia Louis-Dreyfus wrote, "If there is a God, may She bless and keep RBG."

"My heart is broken," actor George Takei tweeted. "RBG, we did not deserve you."

Mindy Kaling tweeted about Ginsburg's legacy and the impact she will undoubtedly have on future generations.

"Ruth Bader Ginsburg was the kind of scholar and patriot you get excited about explaining to your kids. The kind of person who you say 'who knows, one day you could be HER'. I hope you rest well, RBG, you must have been tired from changing the world."

Even the sports world was touched by Ginsburg's passing, with tennis pro Billie Jean King penning a heartwarming tribute to the late justice on Twitter.

"My Shero, Ruth Bader Ginsburg, has died," the athlete wrote. "To pay tribute, those who believe in equality & freedom must fight for the ideals she championed. For her. For us. For generations to follow."