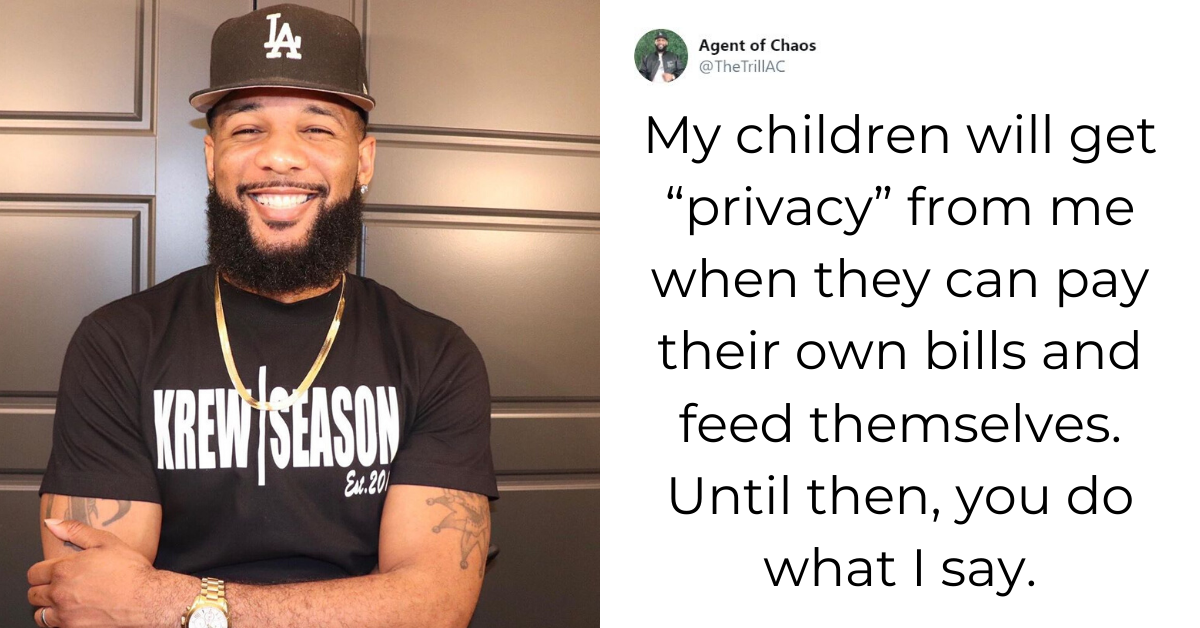 A dad on Twitter has gone viral after he got super candid about his children's right to privacy — specifically, that they don't have any.

Anthony C., who goes by the name "Agent of Chaos" on Twitter, revealed that he doesn't believe his kids deserve privacy while they're still living under his roof, and suffice it to say, people do not agree with him or his parenting style.

The original tweet is a little harsh in the wording but the message is clear: no self-sufficiency means no privacy.

"My children will get 'privacy' from me when they can pay their own bills and feed themselves. Until then, you do what I say. Ain't s*** negotiable. We not friends."

The backlash online was almost immediate as fellow parents, and just other Twitter users in general, spoke out against Anthony's beliefs.

Some people accused him of "hating" children, while others pointed out that he doesn't necessarily have to be friends with them in order to allow them some semblance of privacy.

"Do not have children if you’re unwilling to grant them the autonomy you’d willingly give to a cat," this unimpressed user wrote.

Others spoke up to say this kind of restrictive behavior will most certainly result in Anthony's kids pulling away from him as they grow older.

"Your children gonna grow up, be gone from your life and never once look back," one person wrote, while another added, "I haven't spoken to my mother in ten years. Welcome to your future."

"My mum used to say that last bit to me so often," this person shared. "It burns her now that I'm 30 and we definitely ain't friends."

Some people even pointed out that it's that kind of attitude that usually results in kids acting out.

"Your kids will lie to you, hide things from you and sneak and do it anyway," this user explained. "The tighter the leash, the harder the pull. I [know] too many people whose parents thought like that and they turned out the worst."

Most people in the comments section argued that kids have just as much of a right to privacy as adults do.

"My parents will get 'respect' from me when respect is given and they treat me like a human being, not something that can be stepped on and thrown against the wall at will," this person wrote.

"See how it goes both ways? Anyway, good luck getting old by yourself because your adult children disowned [you]."

However, in the midst of all the negative comments, there were some users who actually defended Anthony's beliefs.

In fact, this user referenced comedian Kevin Hart, who apparently shares a similar approach to parenting his own children, or at least one of his stand-up bits seems to make it appear like he does.

"I like what Kevin Hart said in one of his shows," they wrote. "He said 'the rule in my house is NO LOCKED DOORS. I told my kids if you lock your door again I'll break it down and take it away'."

"Obviously not in so many words but I understand what he's trying to say."

But the overwhelmingly negative response to Anthony's tweet largely proves that parenting has come a long way.

While it's entirely unrealistic to think every parent will ever agree on one perfect way to raise their children, the comments on this tweet seem to show that most modern parents believe their kids deserve privacy, perhaps more than they were given themselves at that age.

What do you think? Do you agree with Anthony's "no bills, no privacy" belief, or do you think children have just as much of a right to privacy as adults do? Let us know in the comments below!