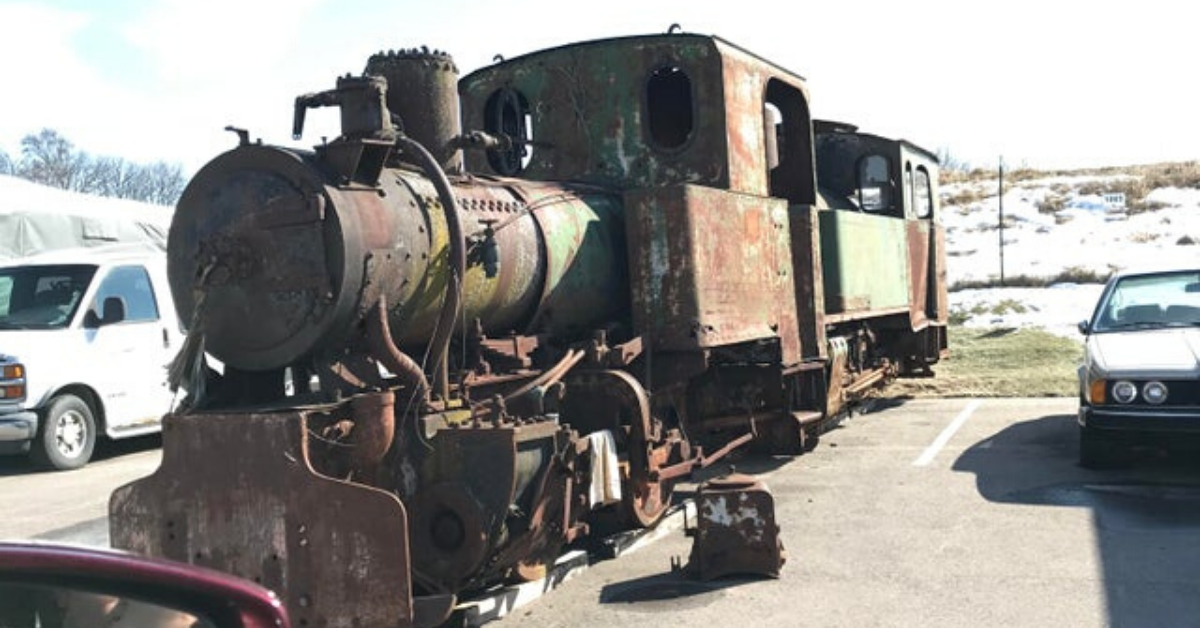 15+ Things Spotted Where You'd Least Expect To See Them

We need to have a certain degree of predictability and consistency for life to make sense. Life gets much more challenging if you can't rely on things like your job and your home being in the same place every day.

So, seeing things outside their more typical context can be quite jarring. You're walking along one day, minding your own business, and bam, there's a train engine in a parking lot. Who could possibly have seen that coming?

A full on house can be seen behind the crumbled walls of a larger building in Croatia. 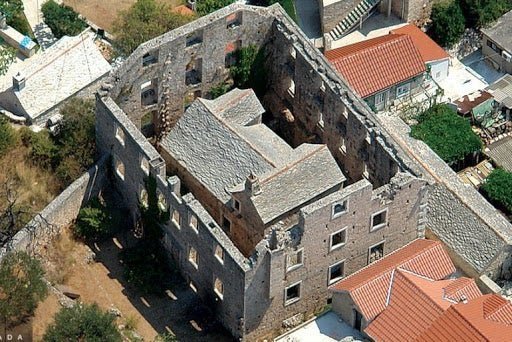 Local legend has it that three wealthy brothers tried to build a house on a site already occupied by a peasant, offering to buy him out.

The peasant refused, and in the ensuing dispute, had to flee in fear of his life. The wealthy brothers then set about putting up walls around the peasant's house, but in the middle of construction, all three died in a shipwreck, after which the peasant came back to live in the house, surrounded by its new, never-finished walls.

Remote control buttons, but as the tread on a shoe's sole. 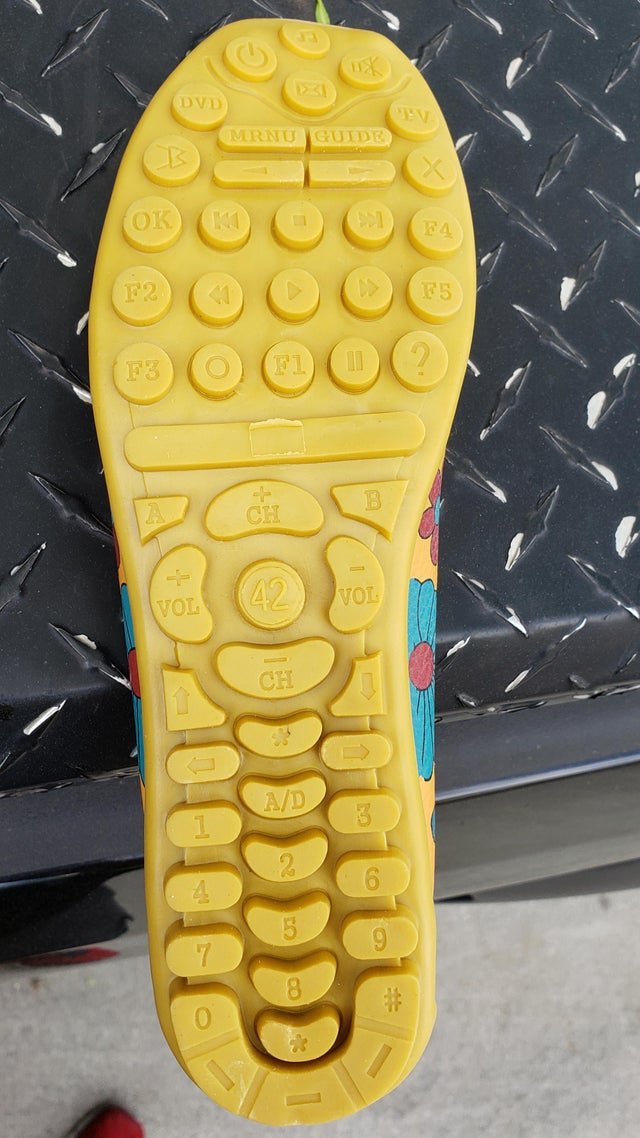 It's certainly a unique design, isn't it? Is it practical? I have no idea. But I certainly wouldn't expect anybody to even try it.

Just a sandhill crane chilling at a Popeye's. 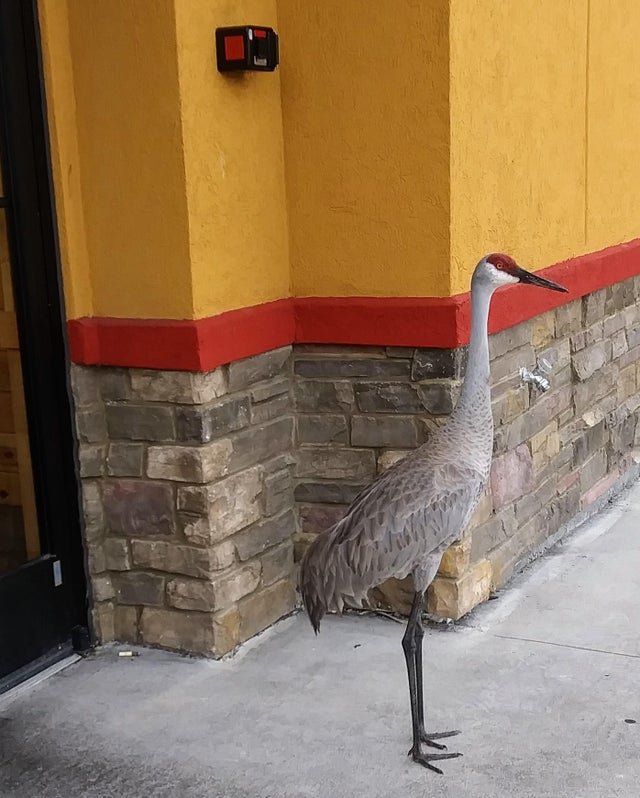 One on hand, it feels like it might be living dangerously, and on the other, it's almost like it's aware that it's not a chicken and therefore has immunity and just wants to flaunt it. 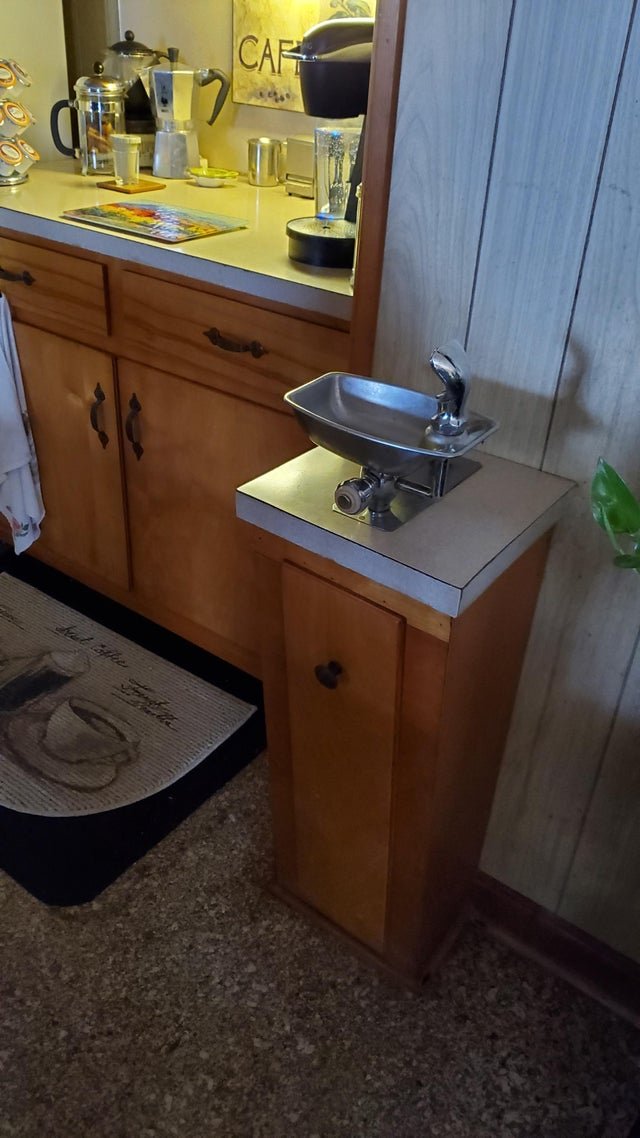 Just like an elementary school or a park! Not sure I've ever seen one in a house before.

The exact same fabric on both a purse and on a restaurant's chairs. 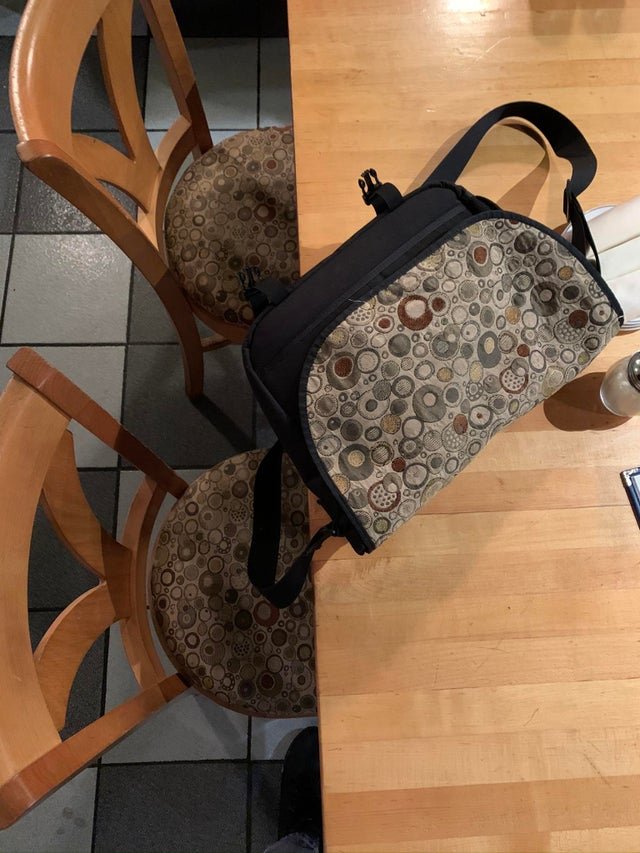 I don't know if that says something bad about either's fashion sense or not. Seems just a bit unflattering though, doesn't it?

An electrical outlet inside a gym locker. 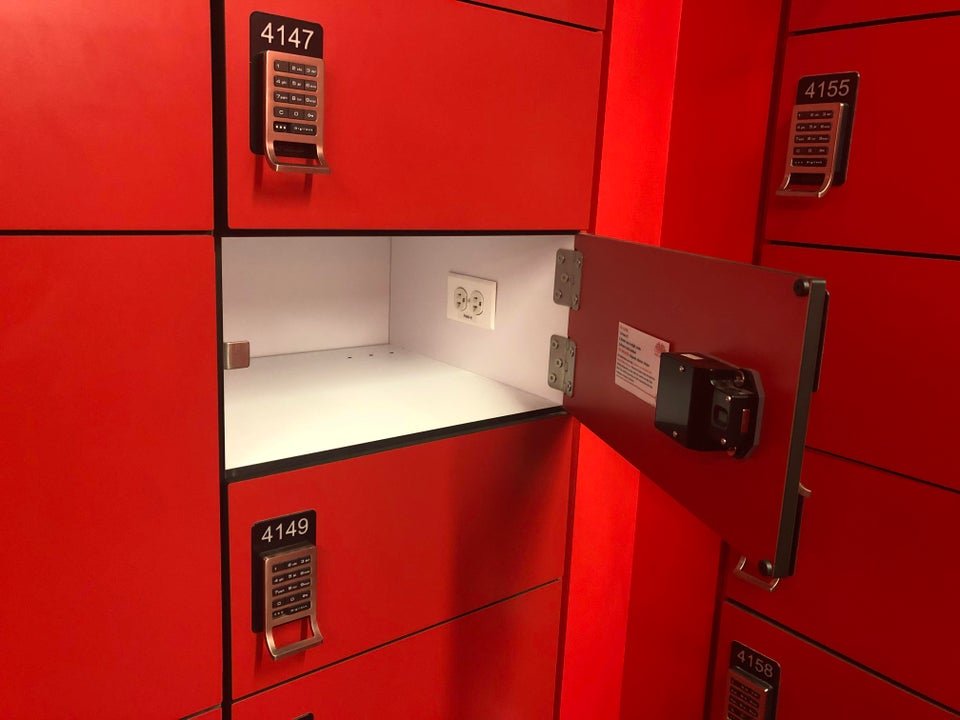 Honestly, wouldn't mind seeing these in more places. Who wouldn't love to be able to charge their phone safely while they work out?

A claw machine filled with TP. 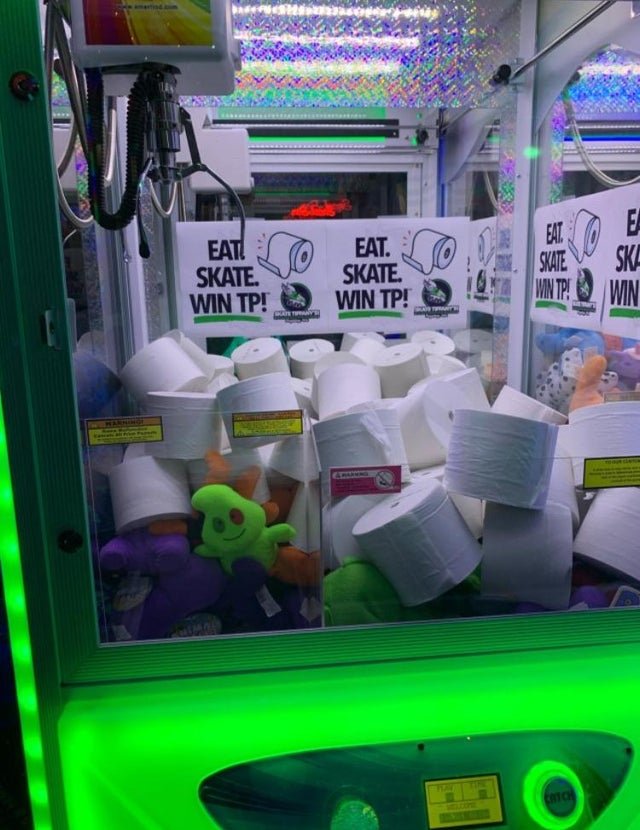 I suppose it's more practical than the typical stuffed toys you'd see in other claw machines, so there's that.

Taco Bell chairs, but not a Taco Bell restaurant. 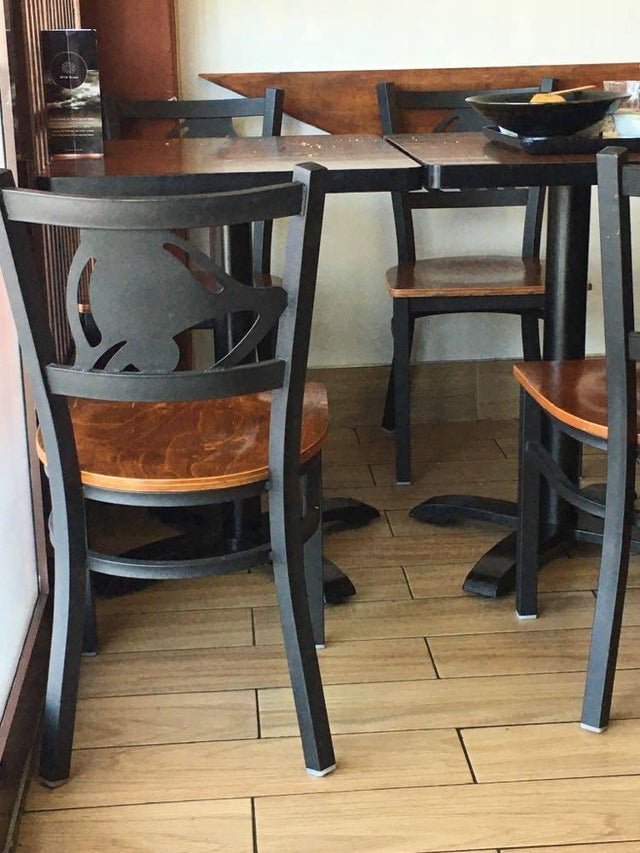 In fact, pretty darn far from a Taco Bell, these were spotted in a Japanese restaurant in New Zealand. I suspect someone got a good deal on them from a Taco Bell shutting down or remodeling.

A Walgreens inside an old movie theater. 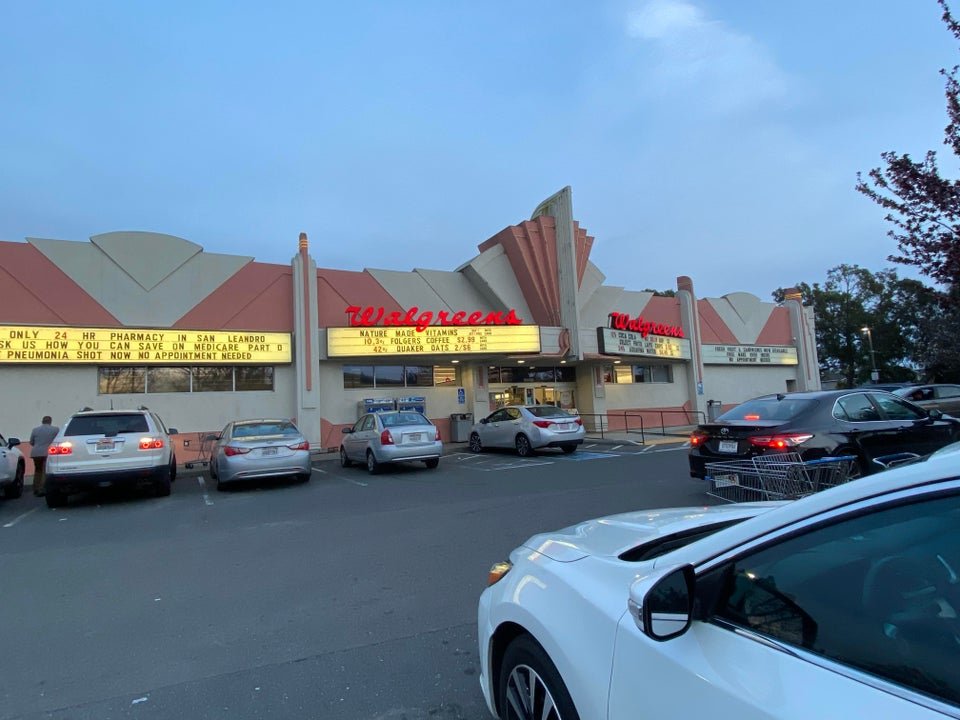 Hey, they could have demolished the facade, but instead they decided to run with it and made something pretty cool.

There's lava all over this road. 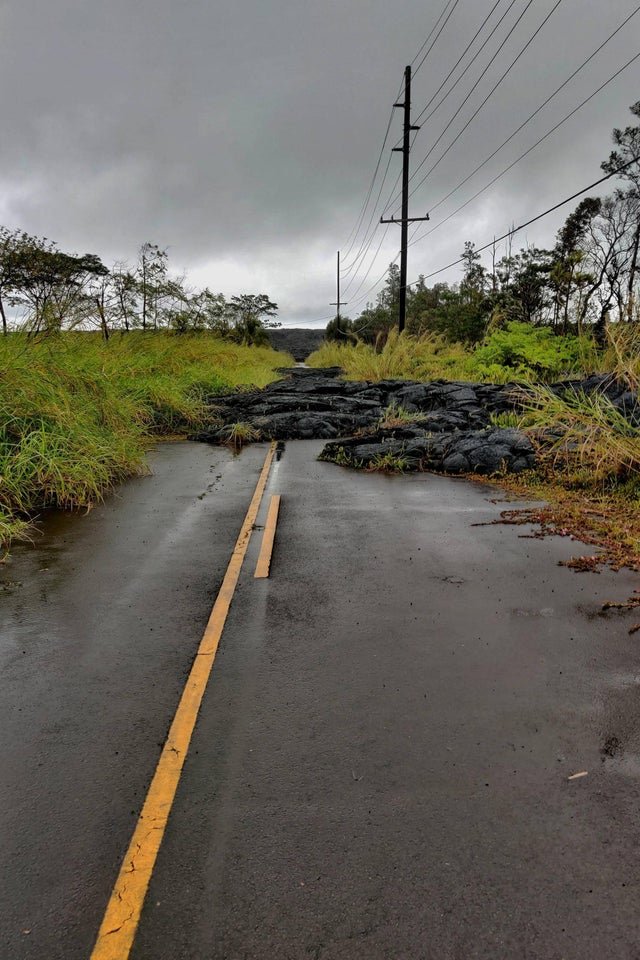 But then, lava is pretty much going to go wherever it wants to go. I mean, who's going to stop it?

A ray of sun(flower) shine from the gutter. 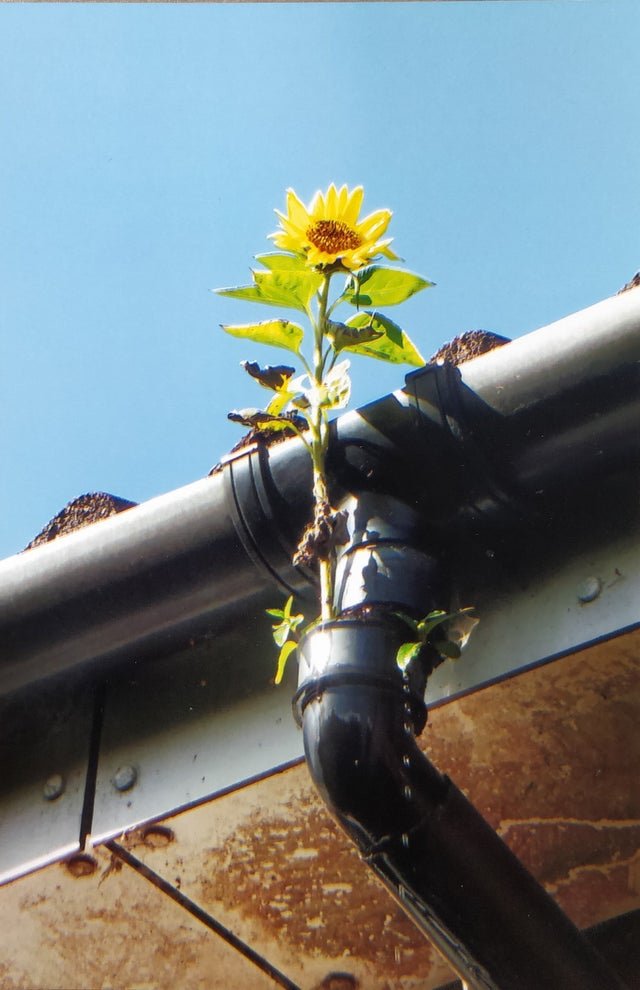 It's actually a bit poetic to see something so lively and shiny sprouting from someone's downspout, right? As long as you're not the one who has to clean it out, of course.

A mushroom decided to sprout on the side of this flower pot. 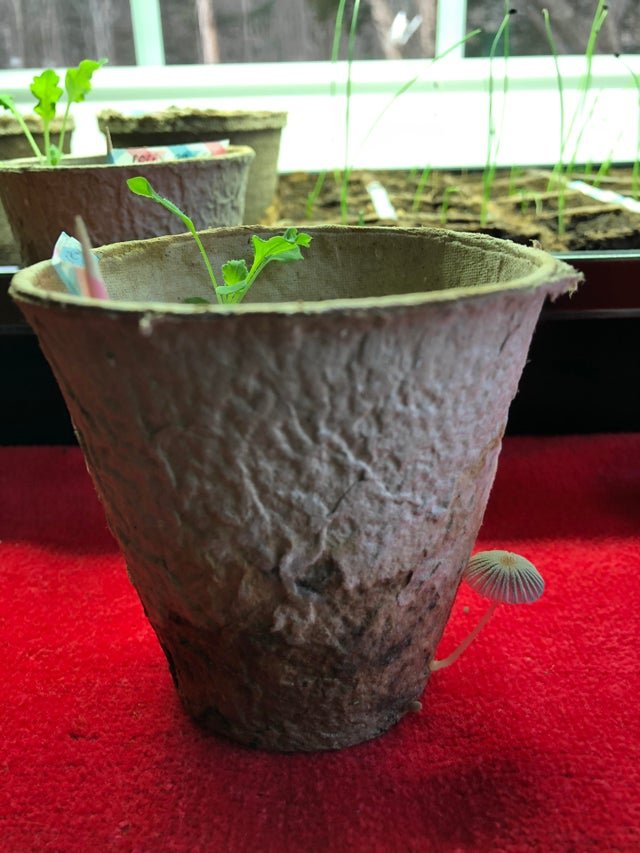 I guess it's a nice bonus? And it makes sense in a way because fungi like moist, dark, earthy environments, but it's still unusual to see. 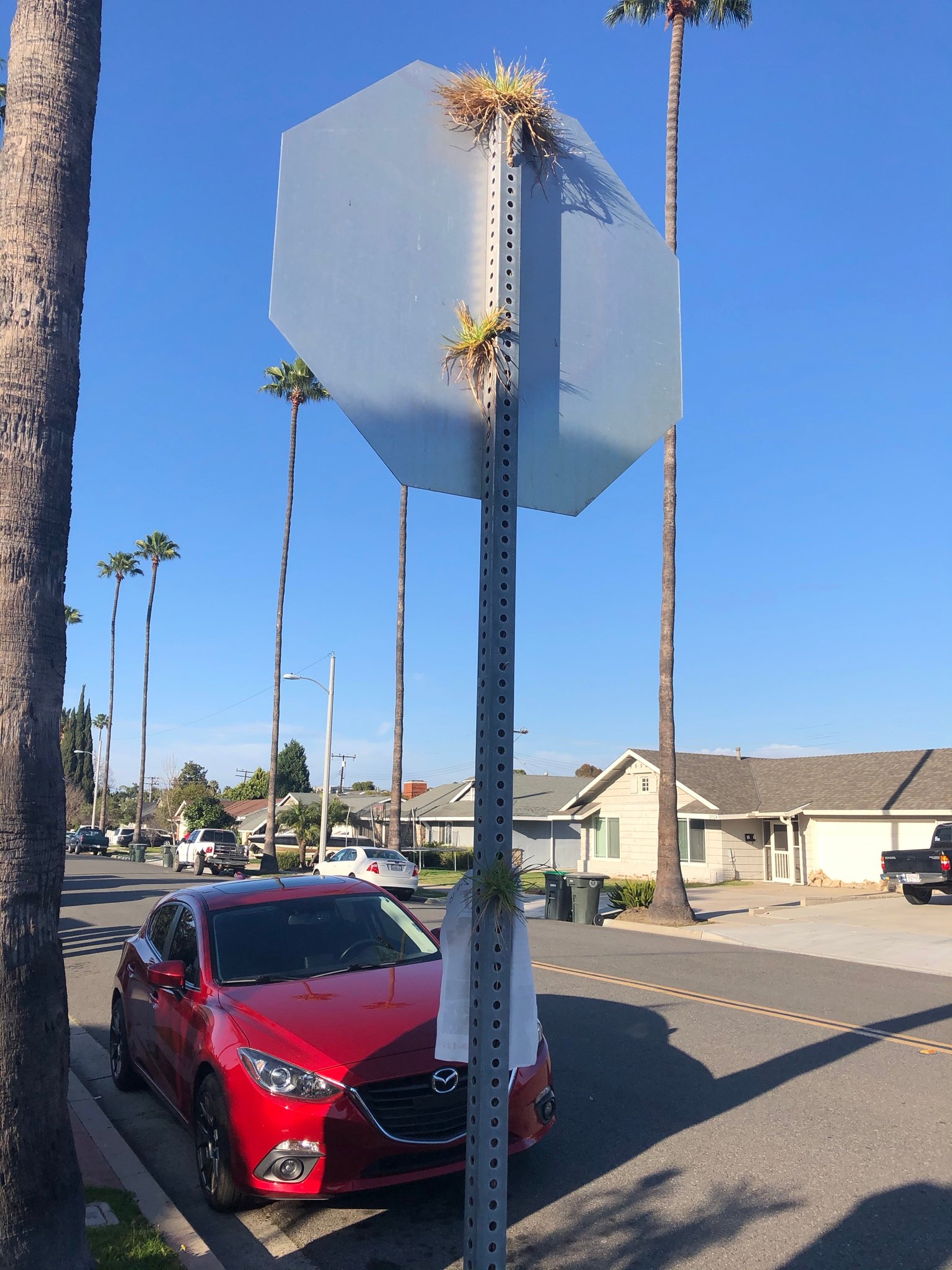 Not only did grass refuse to be blotted out by this sign post, but it grew all the way up to the top.

I guess there are less odd spots to see a buoy. 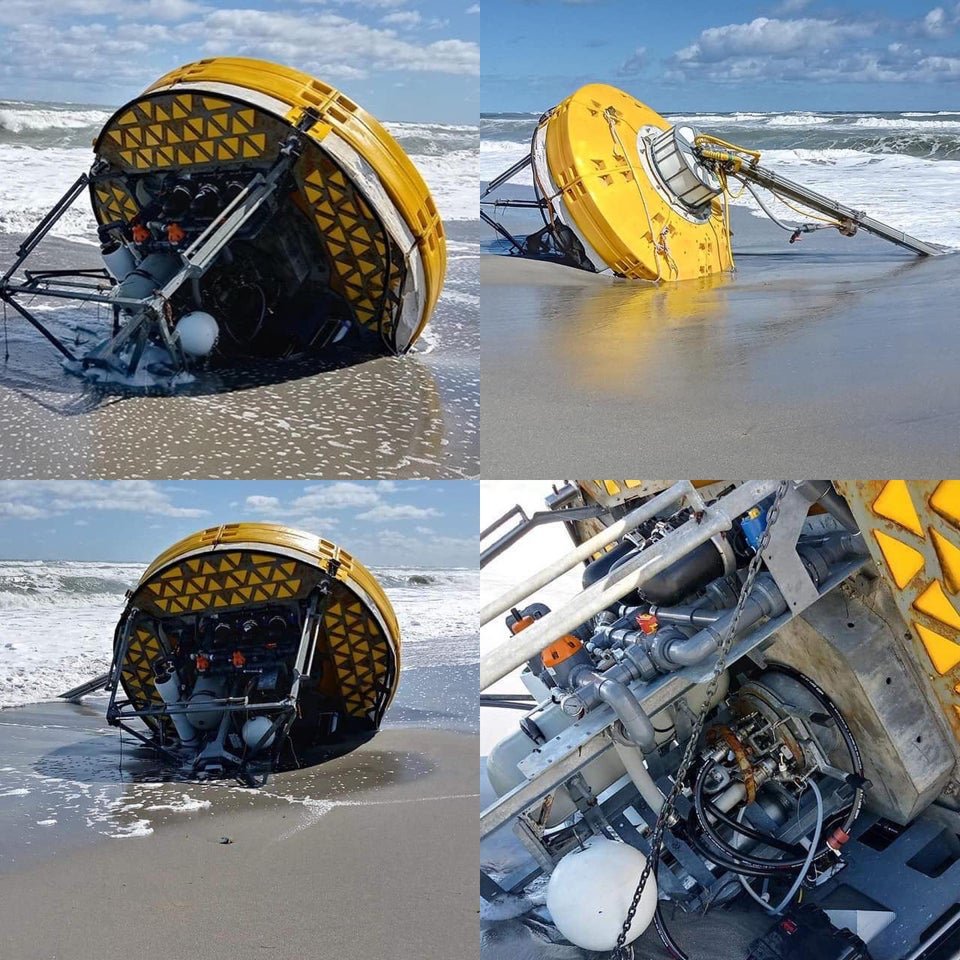 But usually they're much, much better at staying out in the ocean. This particular buoy is actually a wave-powered desalinator that broke loose of its anchor. 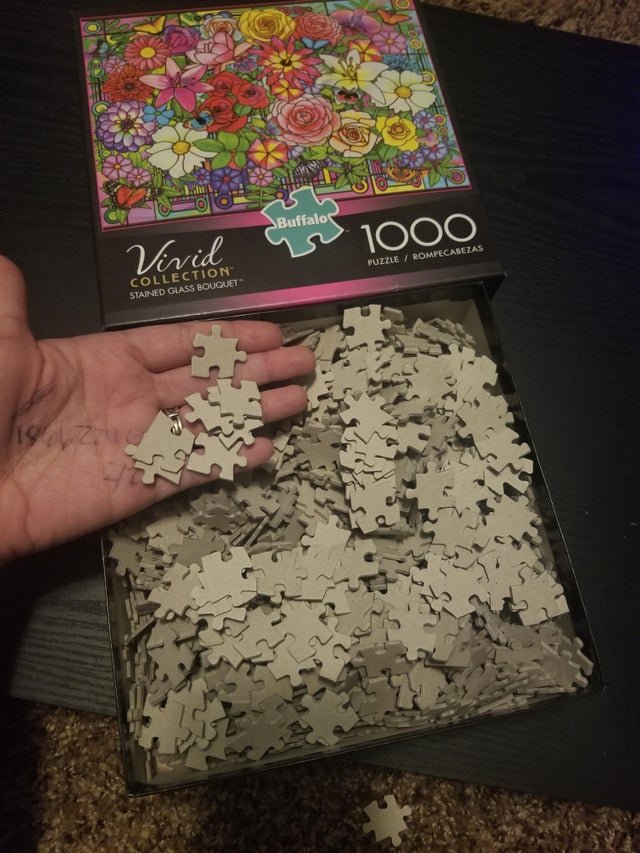 I don't think the person who bought this puzzle was expecting such a challenging glitch, finding all the pieces blank rather than having a pattern you could follow on them.

The husk of an old train is just sitting in a parking lot. 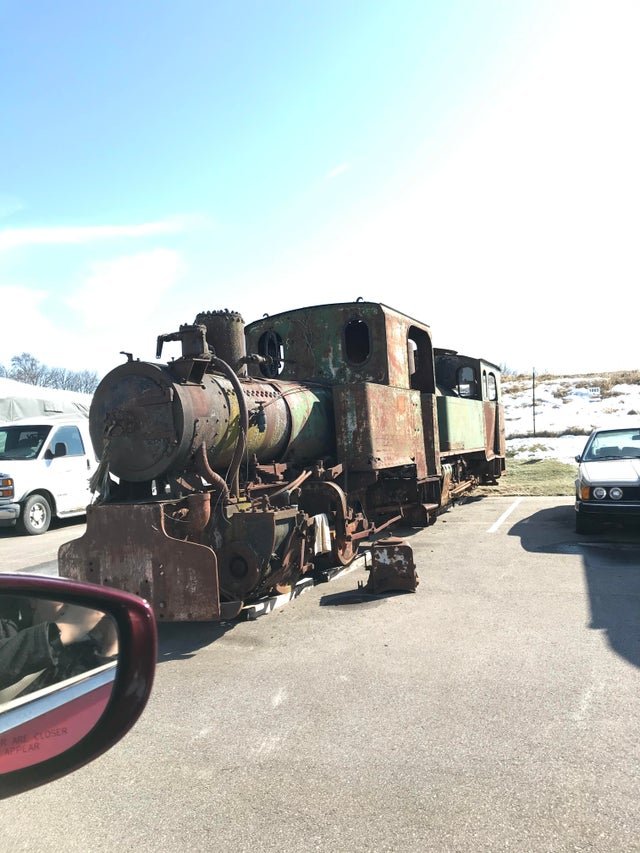 It's unclear how it got there, or how long it's been there for, but it's safe to say it's no accident.

Okay, so it's not odd to see stamps on mail, but these particular stamps are sure different. 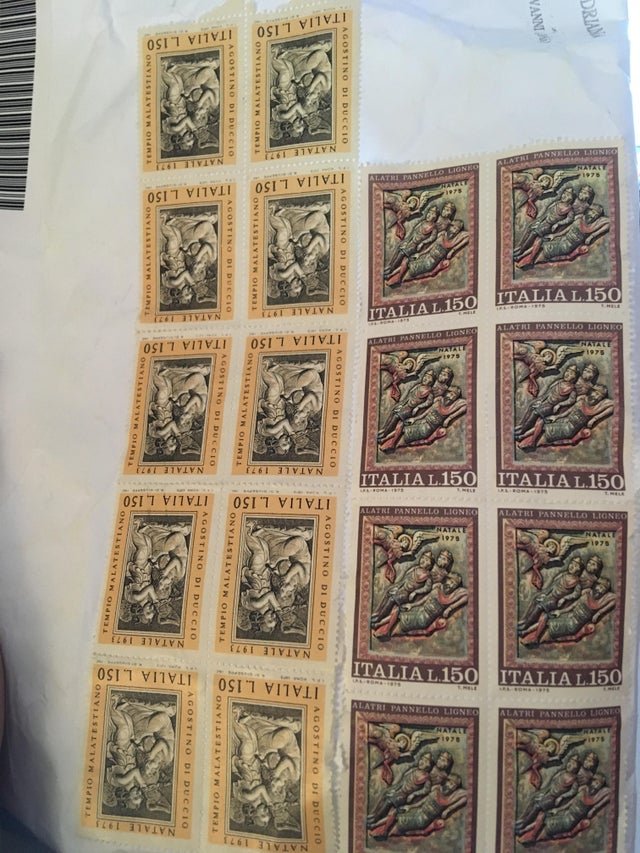 Really, they should probably be in a collector's album, because they're ridiculously out of date. They're priced in Italian Lira, which stopped being legal tender 18 years ago.

"I was walking my dog on a trail and I found a jet ski in a tree," wrote the uploader. 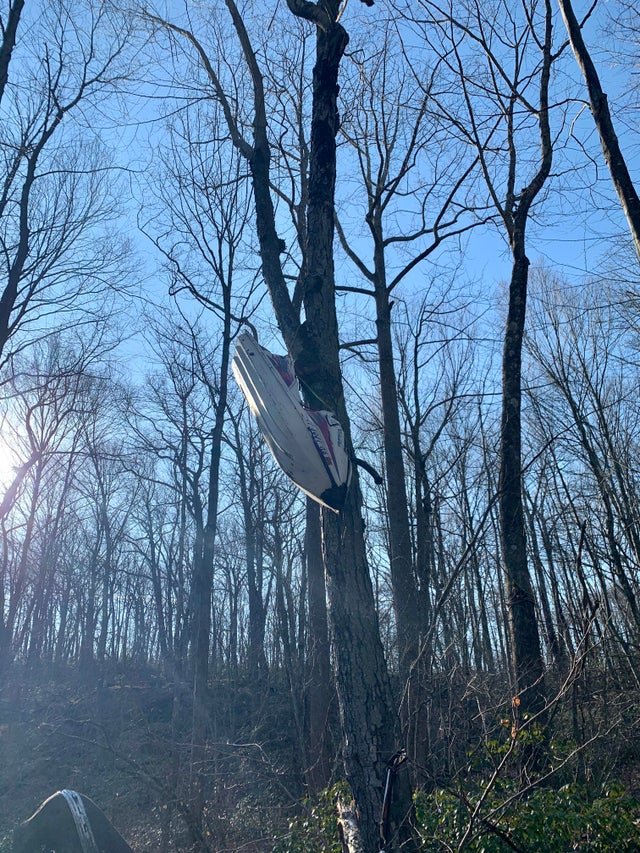 So, what are we thinking? Did the area flood? Did someone take it off a ridiculous ramp? Who knows?

"My two-year-old son swallowed a coin...the x-ray speaks for itself." 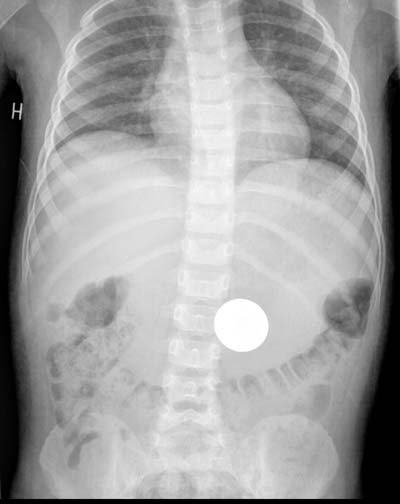 And I bet that's the last time the kid ever did that, given how memorable an experience passing it would be.

This bird is making itself at home in a school library. 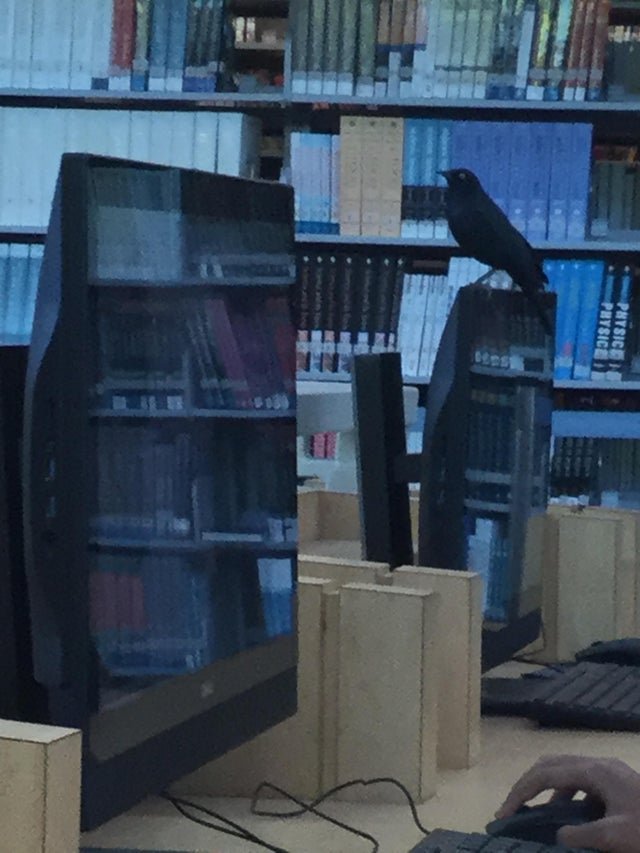 Wonder if it's a Poe thing, or if it's been hearing things from certain sandhill cranes about sweet human spots to hang out in.