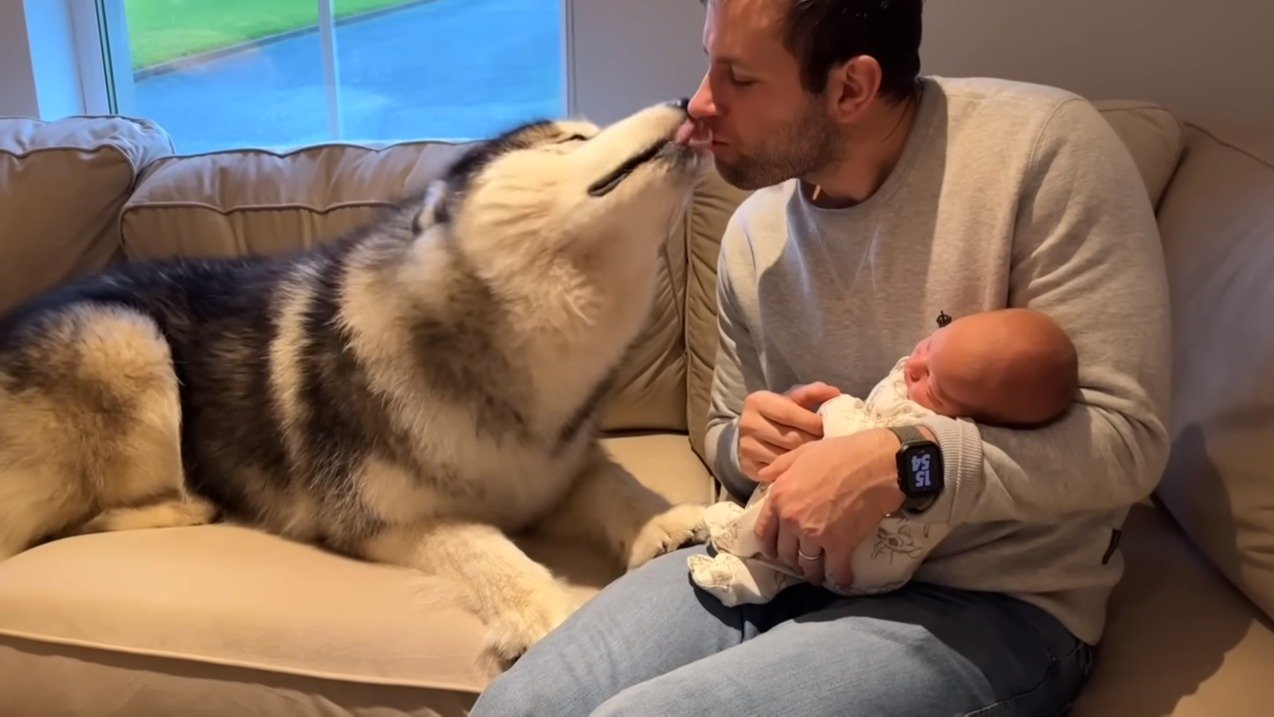 Animals and babies don't always mix. Certain pets (dogs especially) will have temperaments that don't make them well-suited to be around newborns, given how delicate and sensitive a newborn baby can be. That being said, a lot of well-trained dogs might just surprise you with how gentle and attentive they can be around a baby.

In a recent viral video, a rambunctious giant husky takes on a new temperament when meeting his brand new baby brother for the first time ever. The video, which was uploaded on November 12th and already has nearly 3 million views at the time of writing, melted hearts with its cuteness.

The channel centers around the couple and their three dogs, Phil, Niko, and Teddy, as well as their cat Milo and two kids. The three dogs are Alaskan Malamutes, which is a large, fluffy breed similar to a husky.

In this now-viral YouTube Clip, Emma holds the camera and asks the dogs if they want to meet their new baby brother, whom they'd just brought home from the hospital. All three dogs seem quite excited, but Teddy, the youngest of them, is calm enough for Emma to want to start with him.

The rest of the video shows Teddy calmly but excitedly sniffing the newborn (whose name isn't given) whenever he can. He also licks Shane's face, though he listens when both parents tell him not to lick the baby. They both praise Teddy for his good behavior, and at one point, Emma says, "I feel bad for being so nervous about this introduction."

In the video's caption, they write, "Who would have thought we would get this reaction! The size of this dog! its just so pure to see this type of [reaction] from a dog and to understand how loving and caring they can actually be. They understand more than we give them credit."

Just like his parents, fans praised Teddy for his calmness when meeting the newborn boy. Teddy has a reputation among fans for being hyperactive and rambunctious (since he's still quite young at 2 years old), so many were shocked at how he was able to tone himself down and be respectful of the baby's space and fragility. It just goes to show that dogs understand much more than you might think!

Users Continued To Praise Teddy, As Well as His Owners

Teddy's behavior is definitely a testament to how well he's trained and taken care of at home. Still, the pup defied everyone's expectations by acting the way he did. Commenters from all over couldn't contain their love and respect for Teddy as well as Shane and Emma.

And of Course, Everyone Thought It Was Just the Sweetest Thing 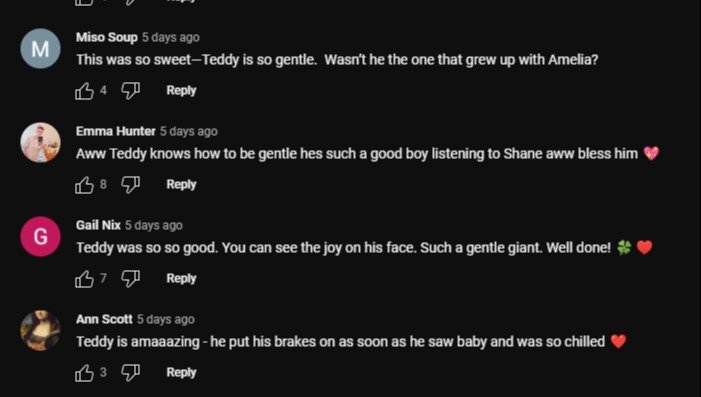 Even if you aren't familiar with the dogs, their temperament, or their antics on YouTube, you can't help but see this as one of the cutest dog videos the internet has to offer.