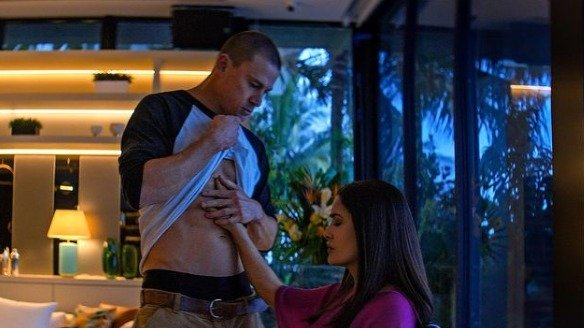 The world really hasn't been the same since 2012's Magic Mike first hit theaters. Partially inspired by Channing Tatum's real-life past experiences as a stripper, the film followed Mike Lane's exotic dancing career and the drama surrounding it. Its success spawned the 2015 sequel, Magic Mike XXL, and now just over a decade after the first film was released, the trilogy is finally set to be complete with the upcoming Magic Mike's Last Dance.

Set to release in time for Valentine's Day 2023, the movie will once again follow Mike Lane, who's left his dancing career behind to work as a bartender. But after meeting a new lover (played by Salma Hayek), he ends up going to London with her to put on a huge show.

Check Out the Trailer for Yourself!

Channing Tatum ever so kindly posted the official trailer to his Instagram account, which more or less shows that Mike Lane never lost any of the moves he'd learned as an exotic dancer. In fact, the first portion of the trailer is dedicated to giving fans a small taste of what's to come in the full film: Mike gives Hayek's character a raunchy lap dance.

Of course, the movie is about more than the steamy, passionate moments (though they definitely don't hurt). As this is likely the last time Tatum will portray Mike Lane, it definitely feels like his character is about to go out with a bang.

Nearly a year ago now, he posted the title page to the film's script, indicating that "Mike Lane’s tapping back in." The post got fans excited, especially considering the fact that director Steven Soderbergh is back this time around, too.

And Now, It Won’t Be Long Until Fans Can See the Final Part of Mike’s Story

For Magic Mike fans, the year-long wait probably felt especially long. But with it coming to theaters on February 10th, the wait is just about up! Just a few months to go.

In the meantime, the Magic Mike Live Tour is happening in Miami, which tells a story inspired by the films.

Though This May Be the End of Mike’s Story, There Could Be More Films Set in the Same Universe

Soderbergh sat down with Variety to talk about the future of the franchise. "There are stories that can be told that have the same sort of ethos and are tackling the same subjects that still involve dance but don’t have Mike Lane in them," he said.