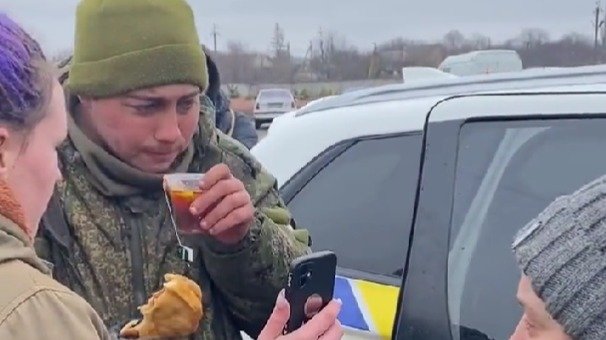 Russia's invasion of Ukraine, its neighbor to the west, has the world on edge.

But thanks to the magic of the internet, we're seeing all kinds of images and videos of the conflict that give us reason for hope.

One such viral video showed the compassion and kindness of Ukrainian citizens when dealing with a surrendered Russian soldier.

Make no mistake: this is a serious conflict.

The last time a European nation attempted an invasion like this, it kicked off World War II.

Russia's actions have made the country a pariah in the international community, with countries around the world introducing sanctions against Moscow. But Russia's soldiers, on the other hand, apparently aren't facing similar treatment.

This video has gone viral.

It shows a Russian soldier who's apparently surrendered. But rather than being led to a prison at gunpoint, the Ukrainians who have surrounded him are giving him food and tea, which he gratefully accepts.

Obviously, the interaction wasn't in English.

That said, there was something powerful about the video that transcends language. You can truly feel the compassion of the citizens in the video, and even though he's part of an invading force, it's hard not to feel sympathetic toward the soldier.

The soldier then talks to his mom. 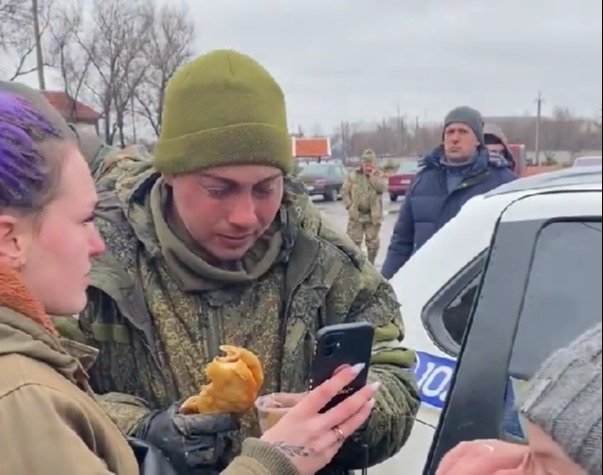 After hungrily eating the food that's offered to him and taking a few sips of tea, one of the Ukrainians offers the soldier her phone. He's able to reach his mom in Russia, and the interaction brings him to tears. 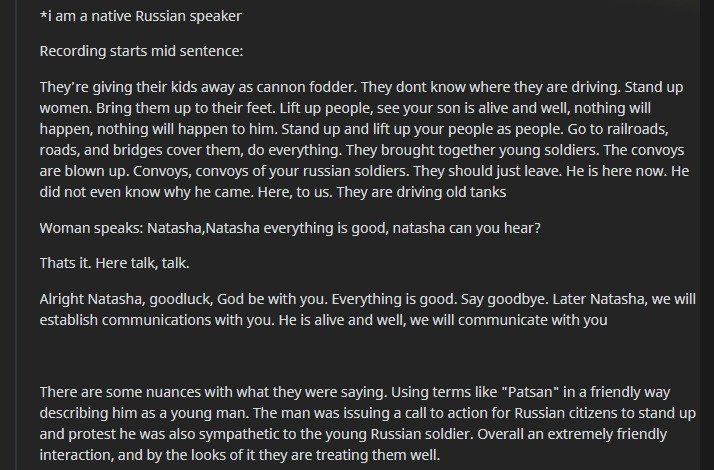 It's a bit rough, as the video starts midway through a sentence. But from the sounds of things, the soldier is disillusioned with how he and his peers have been treated by the Russian military command.

Here's how it played out in real time.

This video amends the original with subtitles. Like the caption states, it's a perfect encapsulation of how Ukrainian citizens have treated Russians who've laid down their weapons.

This tweet echoes my thoughts. The soldier looks so demoralized and so hungry. He came to the country as part of an invading army, but when he was at his lowest, the citizens of Ukraine showed him great kindness.

It's a powerful video.

Amid reports that individual Russian soldiers weren't expecting to be given orders to invade, it's possible that this soldier hadn't spoken to his mom in a very long time. Here's hoping that he and his family are able to find peace and not face repercussions for this viral video.

It can't be easy for the Ukrainians to meet invading soldiers with kindness.

We've already seen Ukrainian citizens standing up to Russian soldiers on their land, even when unarmed, and telling them to just go home. Of course, it's more complicated than that, but clearly not all basic humanity has been lost.

And as some pointed out, it could be strategic as well as human.

Perhaps something more along the lines of "catching more flies with honey," maybe kindness is the answer, rather than making the enemy afraid to surrender.

Some questioned the authenticity of this video.

And it absolutely could be Ukrainian propaganda. It's difficult to 100% verify these videos at the best of times, let alone during a war. But if it is propaganda, it's effective, and the soldier's tears and hunger certainly seem real and not at all forced.

Most of the world is on Ukraine's side.

Leaders are treading carefully in fear that escalating the conflict could lead to all-out nuclear war. But in the absence of direct help, Ukrainians have boldly stood up to one of the world's military superpowers.

What do you think of the video? 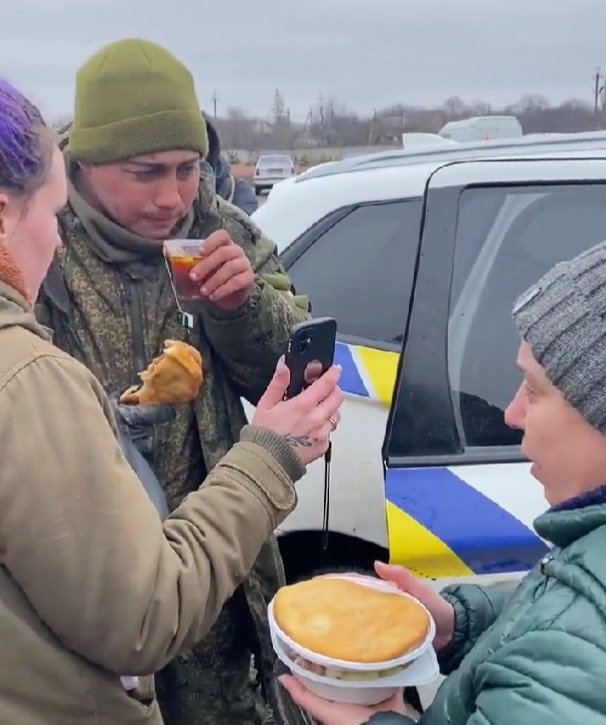 We'll see many more images and videos, some of them inspirational, others upsetting, before this conflict is over.

Let us know what you think of this story in the comments. 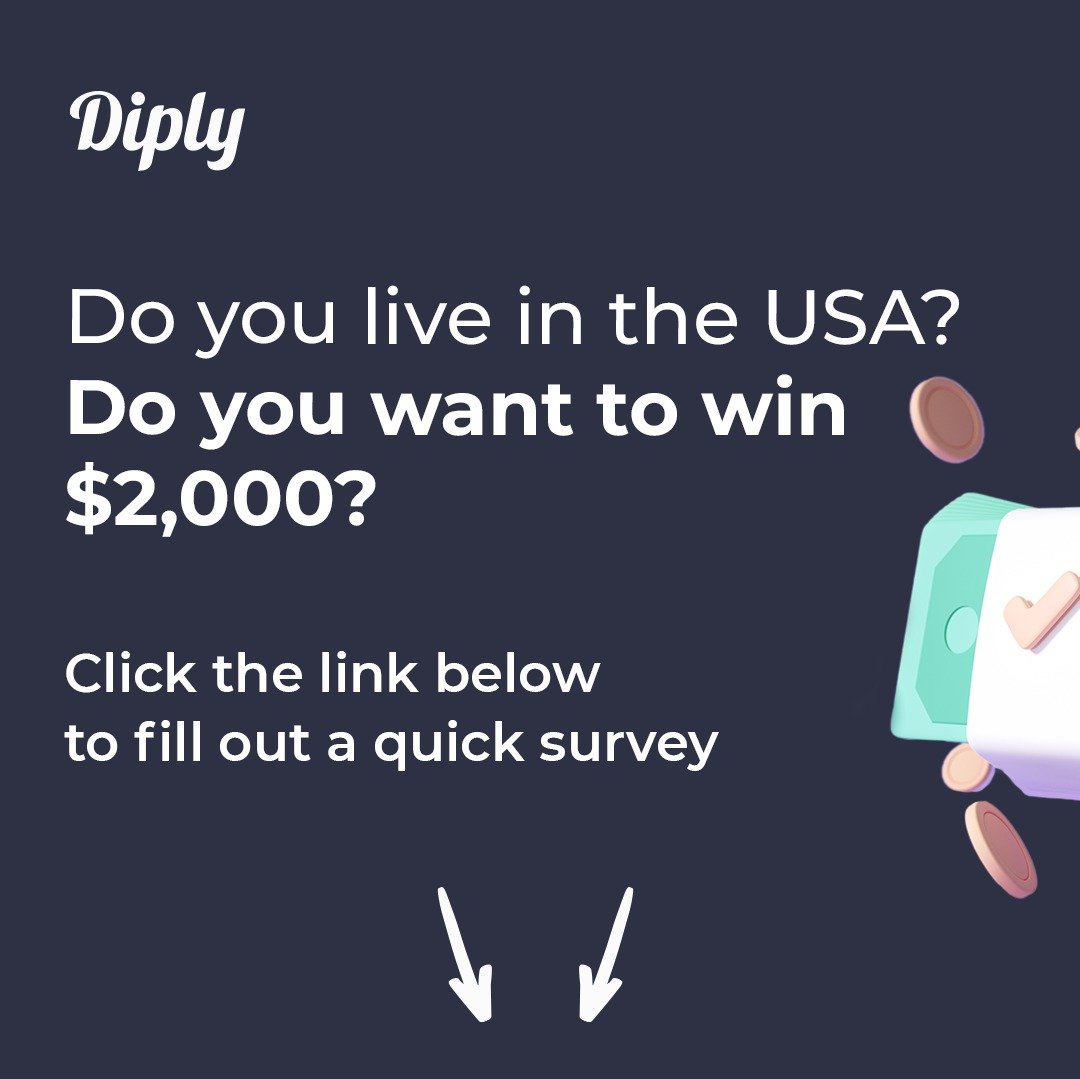 We want to hear from YOU so we can serve you better. Completeand you will be entered to win a grand prize of $2,000, or a chance to win one of 10 Diply prize-packs!