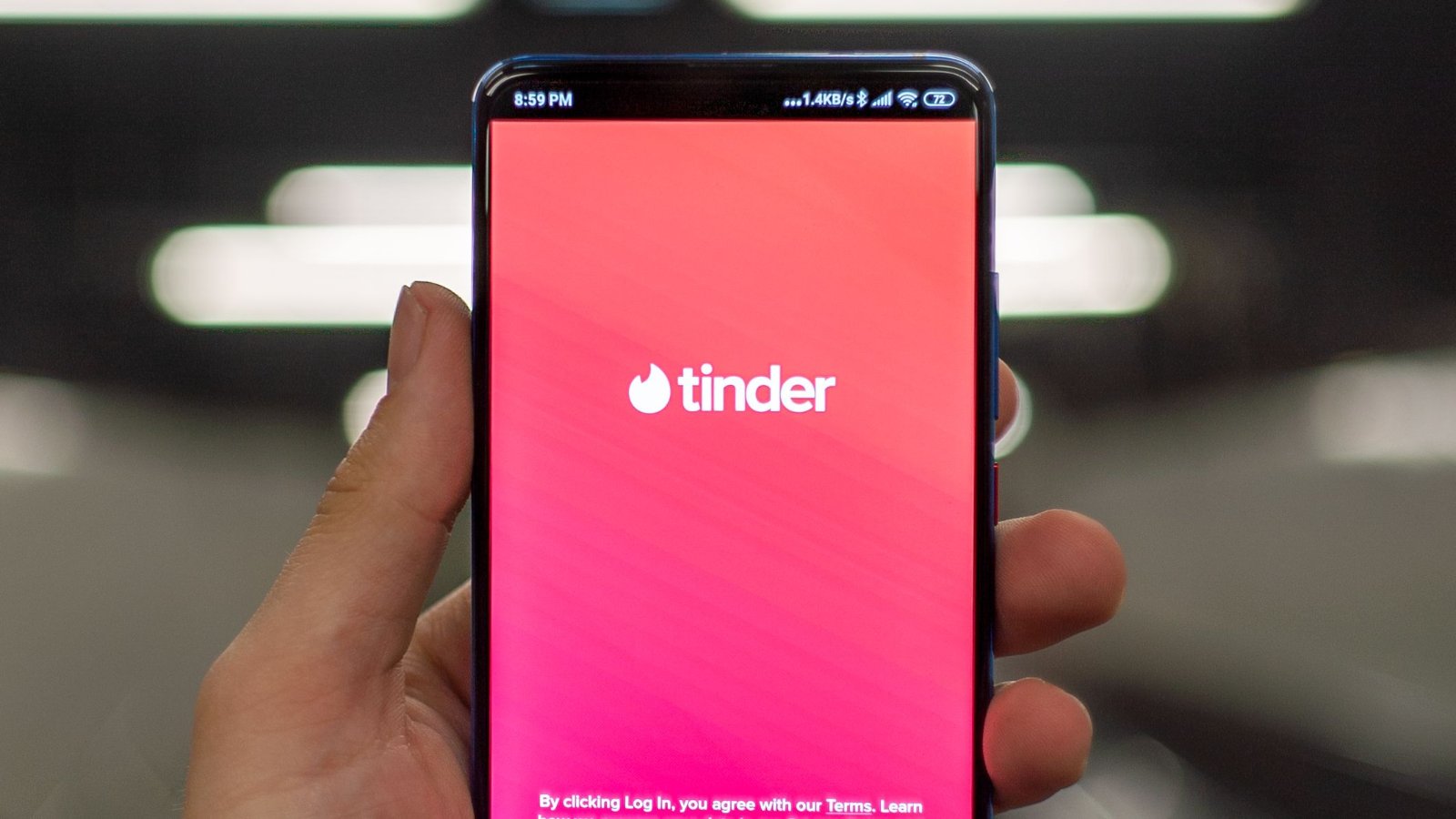 If you're someone who's ever used a dating app (especially to talk to men, especially if you're a woman) you might be familiar with the more... brusque attempts at conversations some men try to use dating apps to have. From the standard "you up?" text to an unsolicited picture of a body part nobody's trying to see over their morning coffee, it's not surprising that men can sometimes have a lot of nerve on dating apps.

Sometimes, like in these examples collected by SheRatesDogs, the amount of nerve in their messages can shock even the most seasoned online dater.

Let me take a second look... 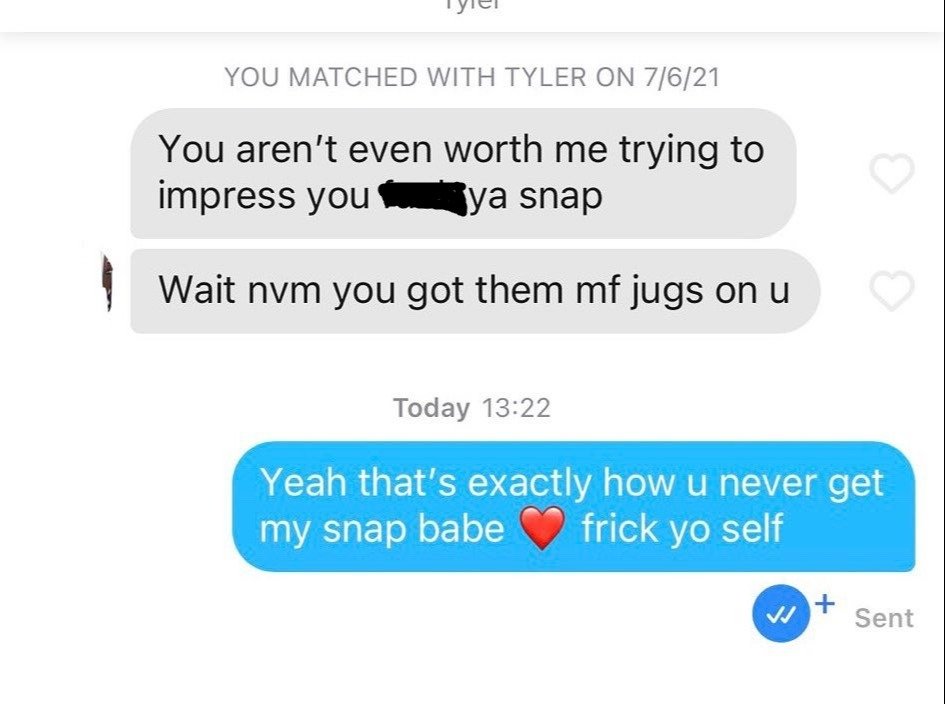 Let this be a lesson to men out there that you should take closer looks at the profiles of the people you're insulting BEFORE you start insulting them. You never know what you might regret later. 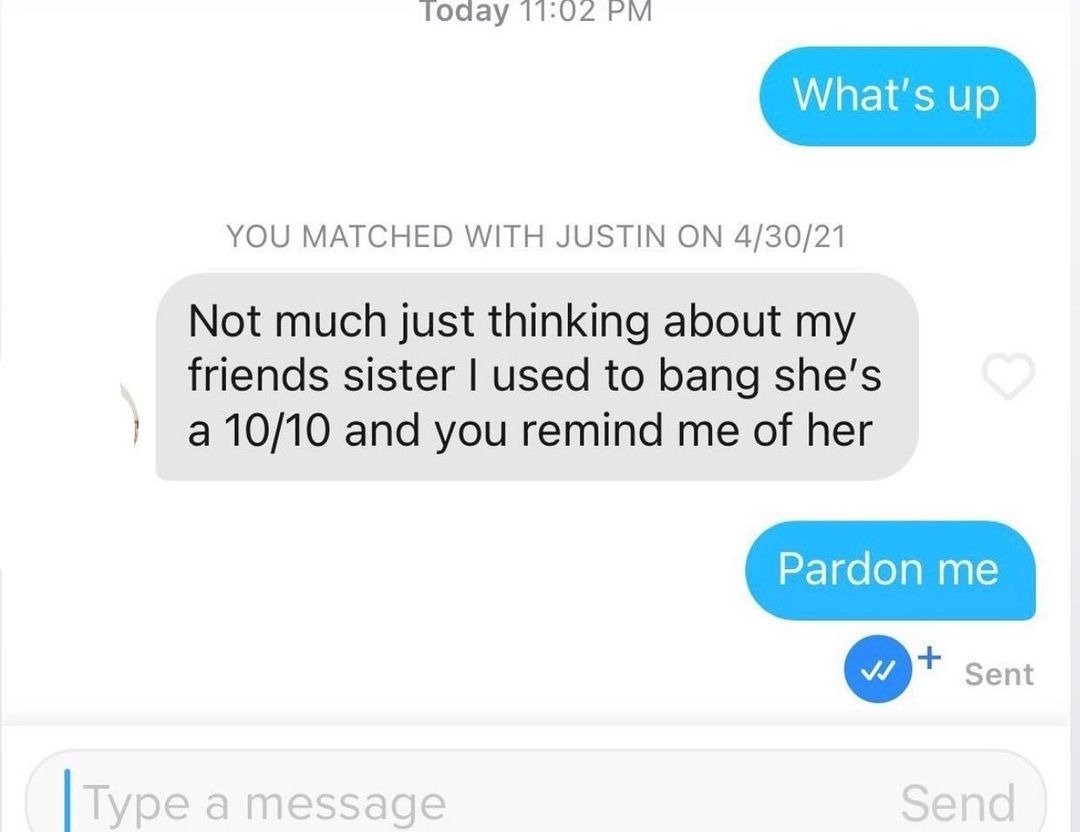 This is the kind of thing you can think to yourself, but absolutely should NOT say out loud, especially to a stranger on a dating app.

I think Ian might be on the wrong app. 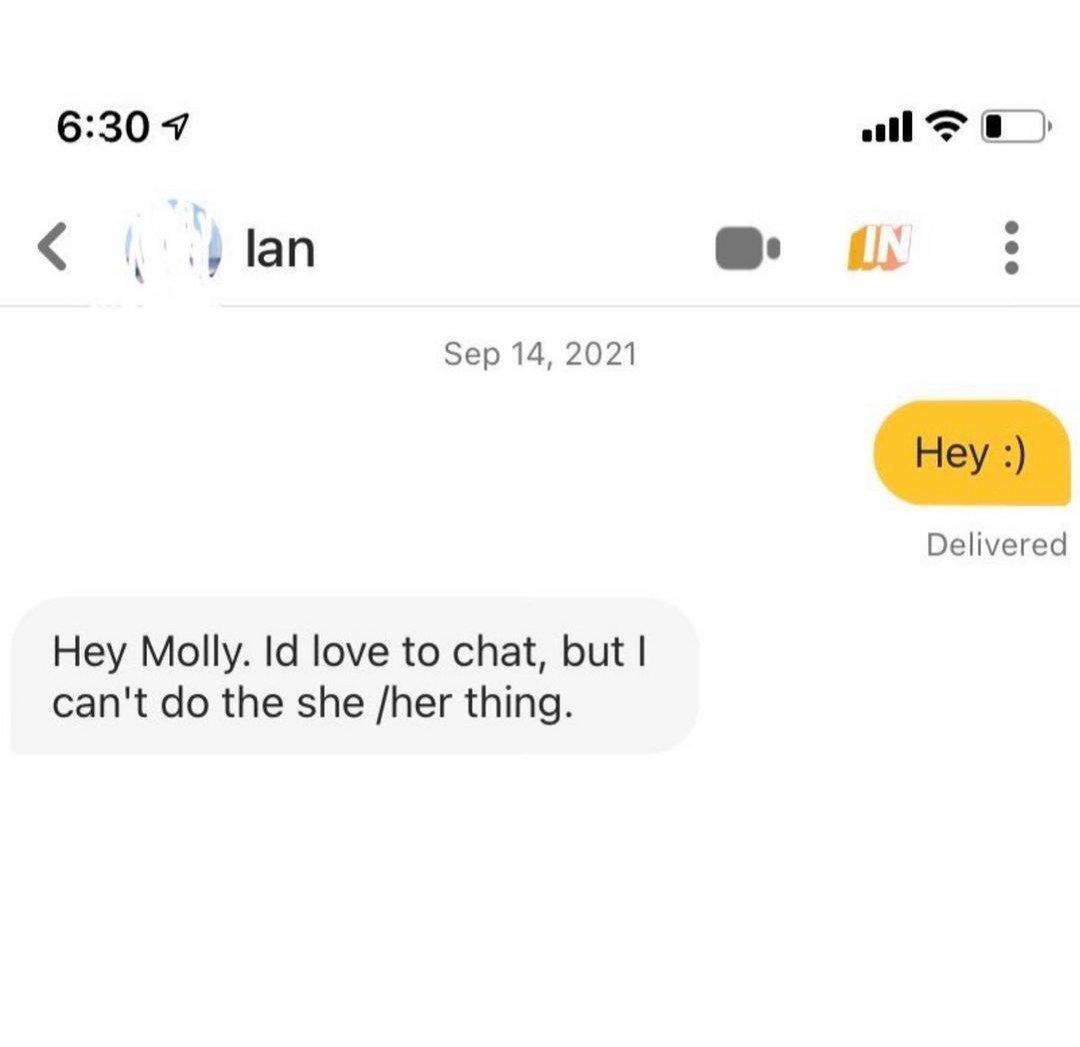 I guess I just don't understand why you wouldn't bother to read someone's profile BEFORE you matched with them, and then take the time to send them a snarky little message like this instead of just unmatching. 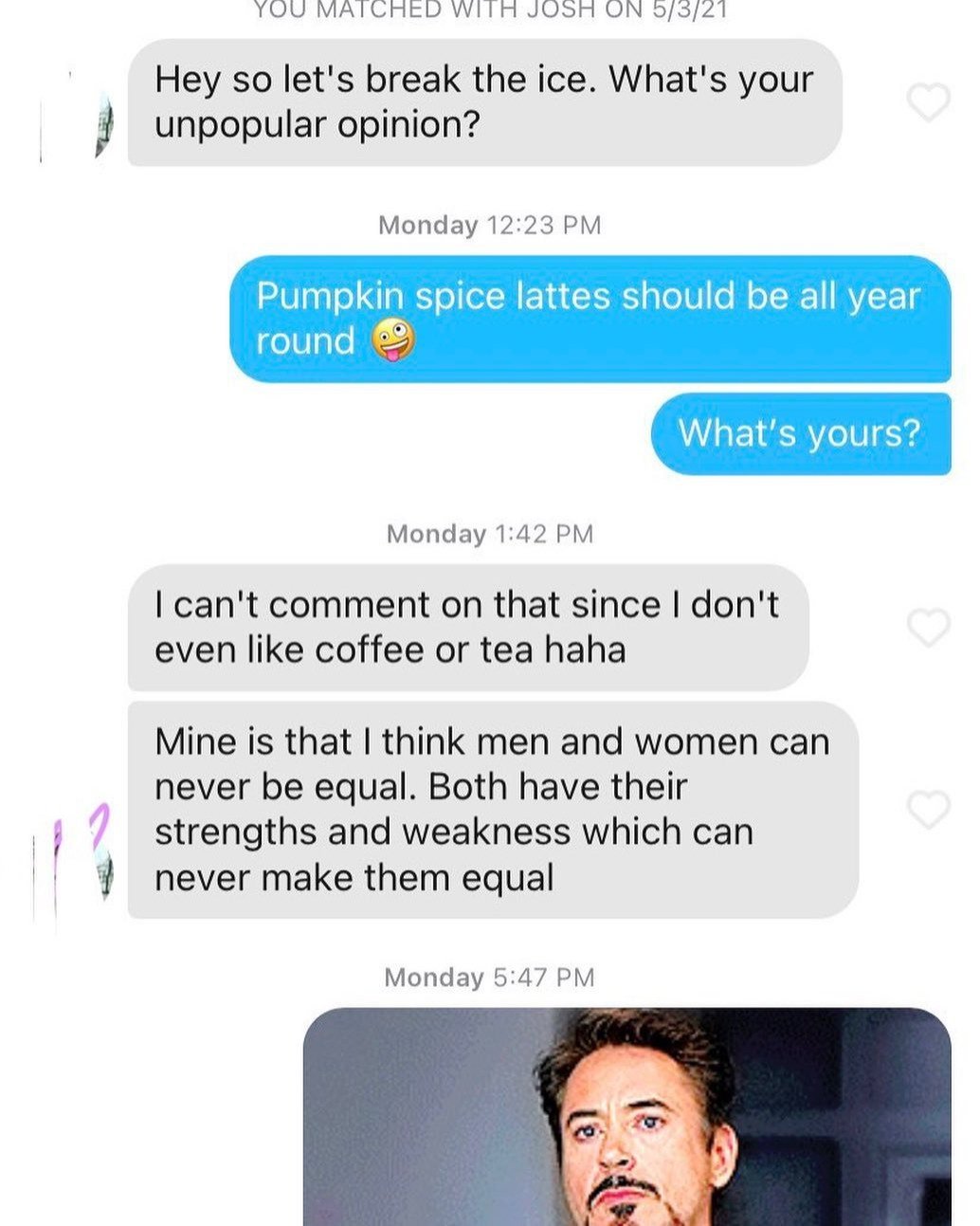 Hey, at least he got it out of the way early so you didn't have to waste any more time on this conversation! 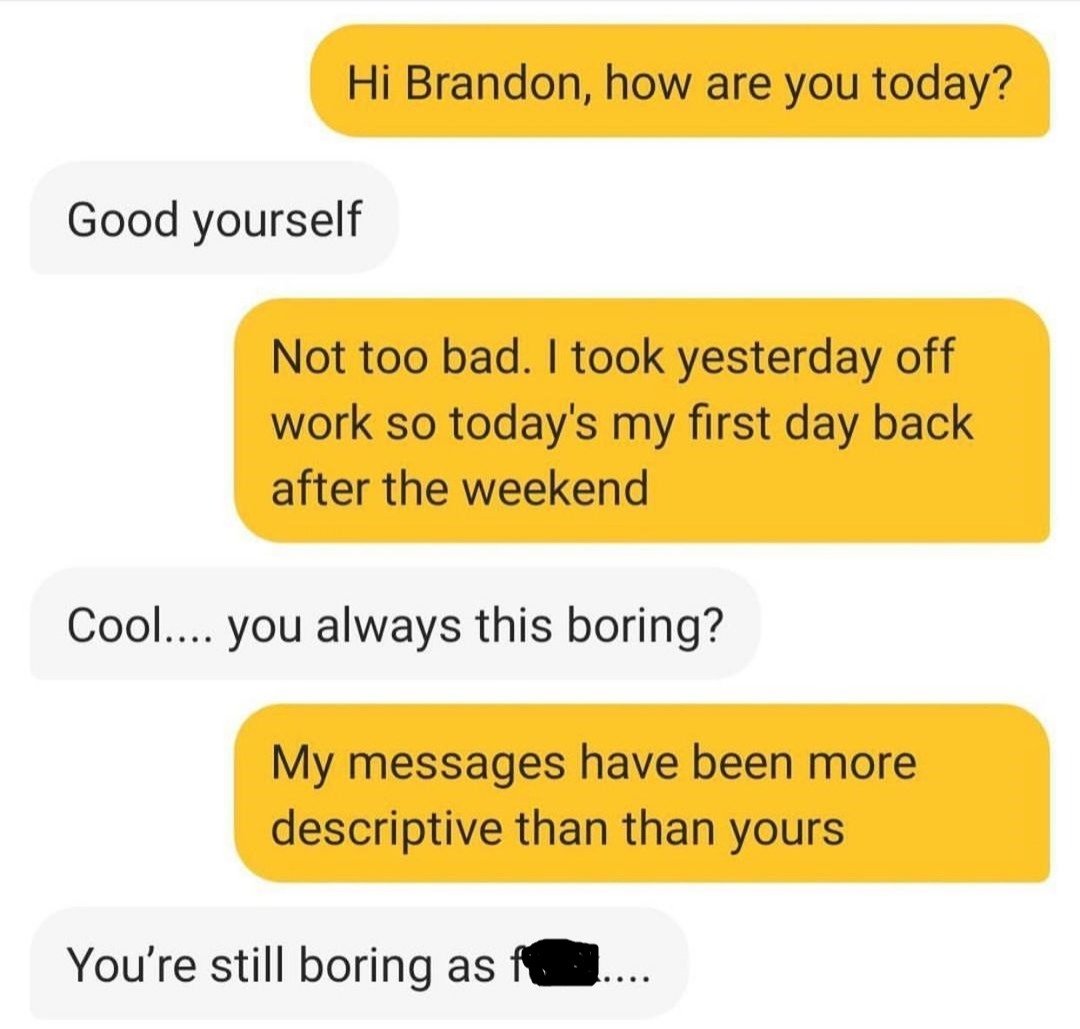 I don't know what some people on dating apps are expecting instead of small talk, but apparently this girl wasn't up to snuff. I'd personally rather talk to someone boring than rude. 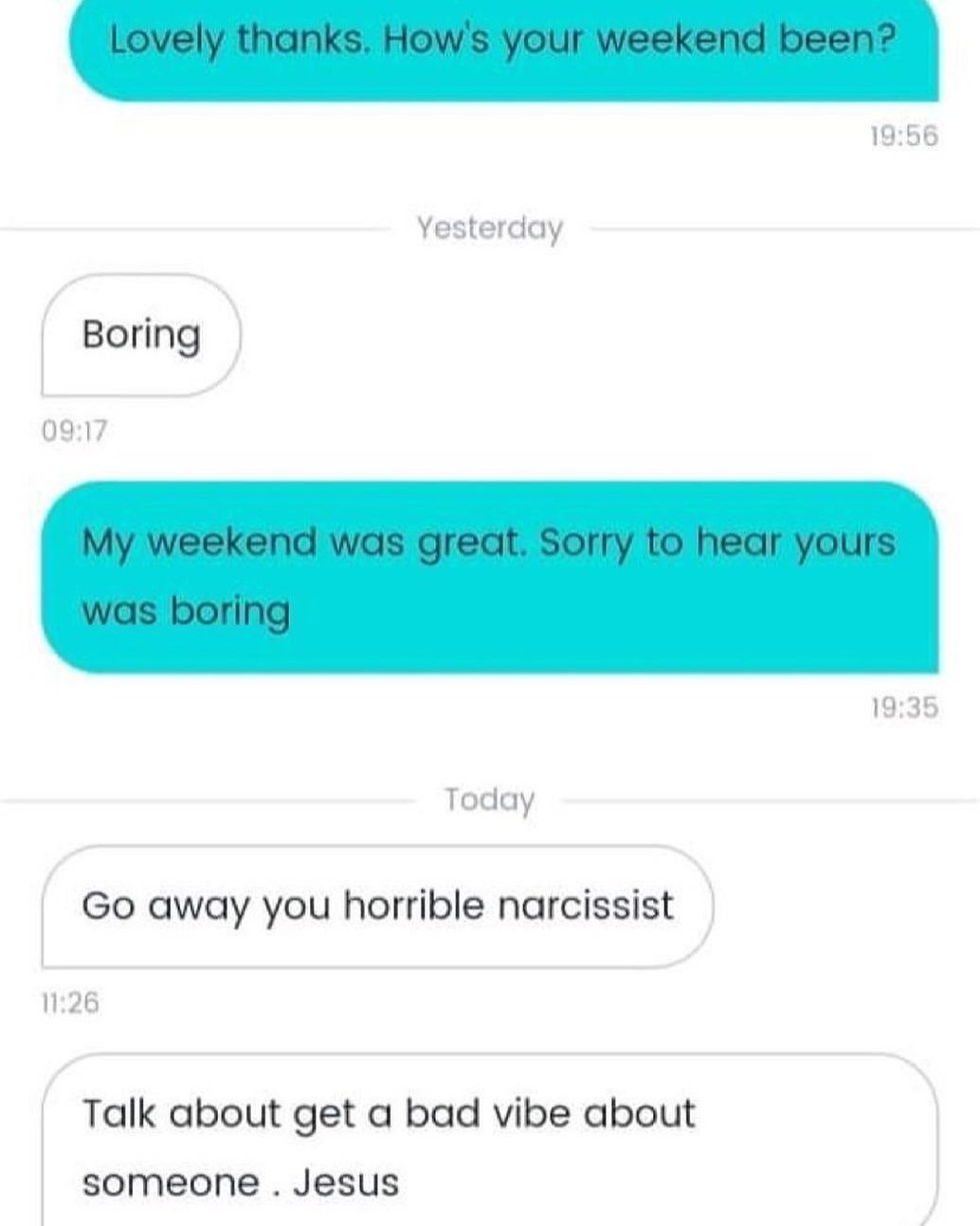 Sometimes people just make their mind up about you before you even have a chance to make a first impression. Most of the time with these people you're not missing out. 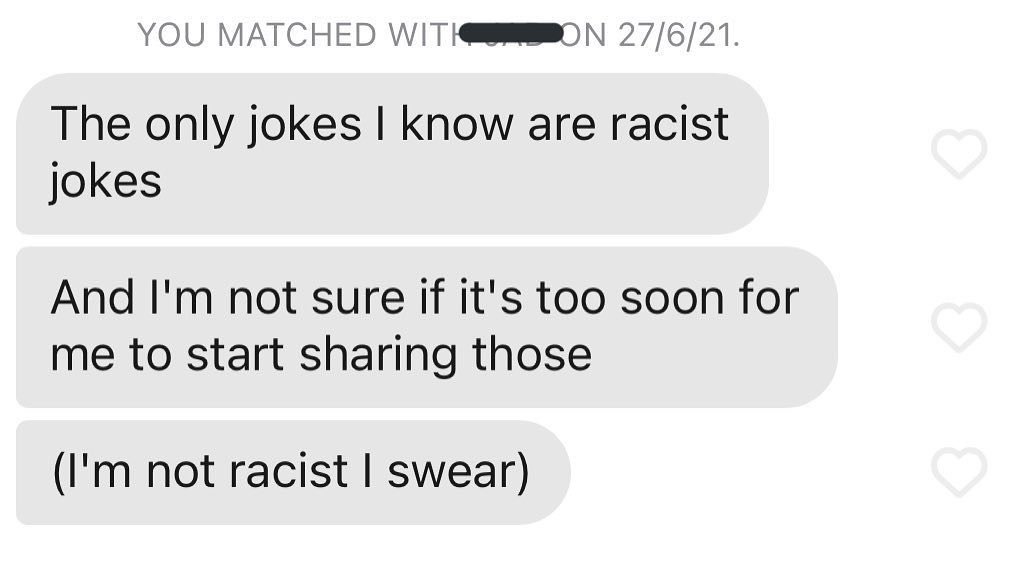 If your opening message to someone has to end with (I'm not racist, I swear), you might want to reconsider your strategy. 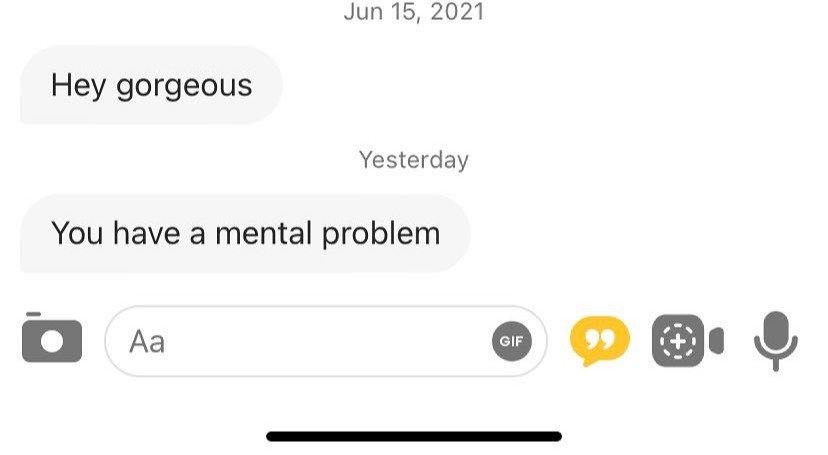 I mean, he kept it short, but he missed out on the "sweet" half of the directive by a mile. 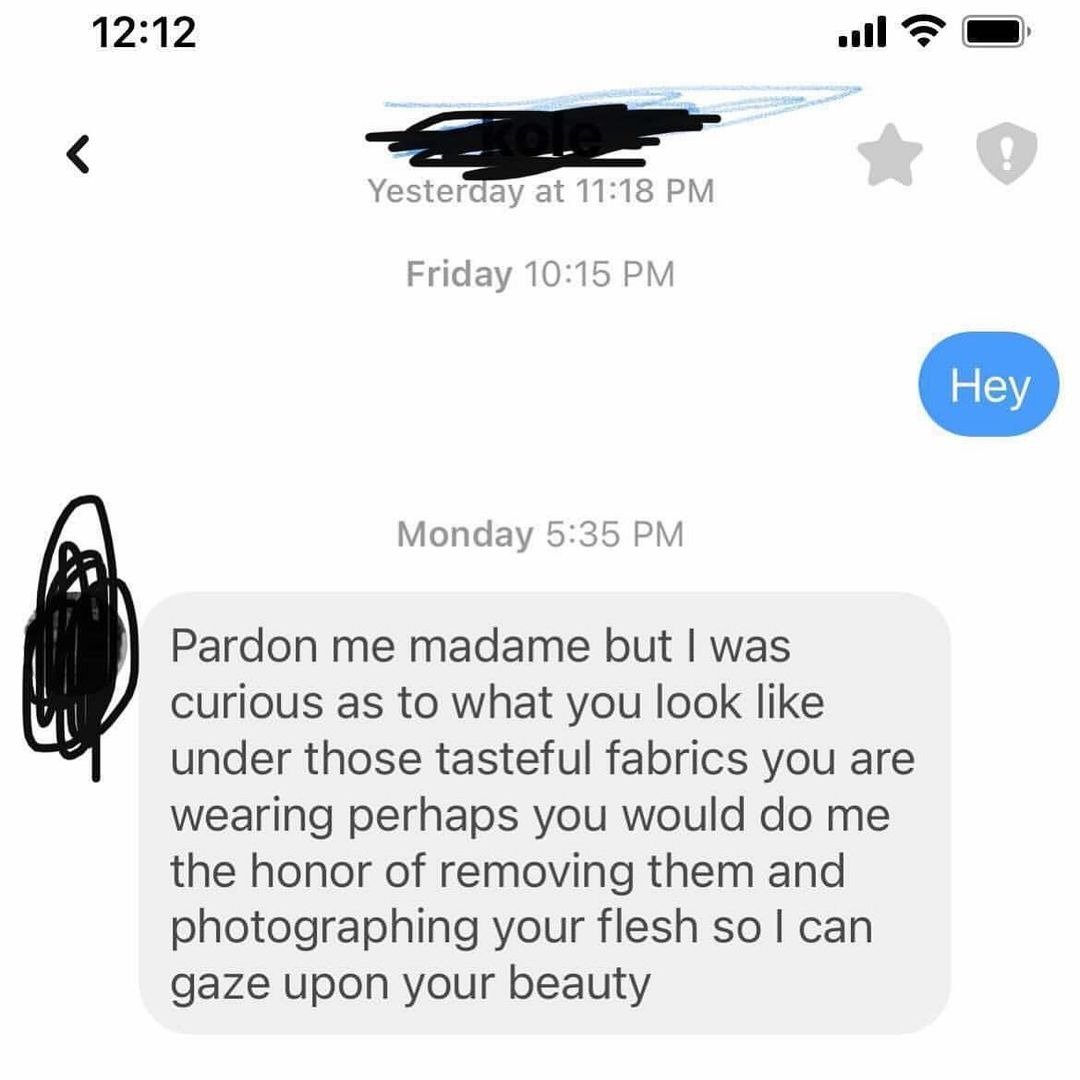 If you're going to open by asking someone to send you naked pictures, you might as well be as direct as possible, because nobody who is on the fence about the issue is going to be swayed by you talking like this. 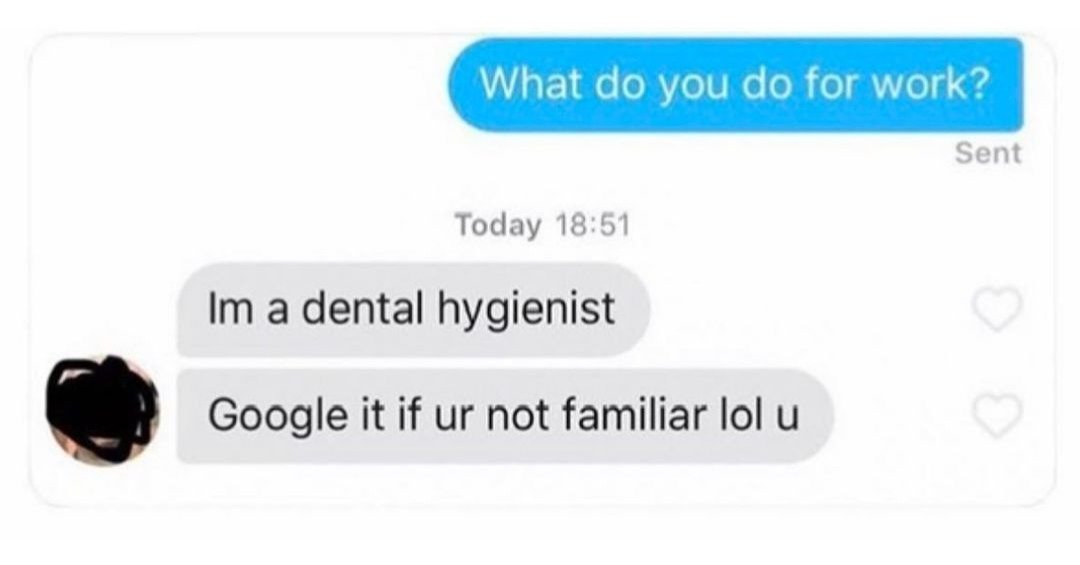 I can't think of a single person who wouldn't know what a dental hygienist is, and that includes pretty much every kid who's ever been to the dentist. 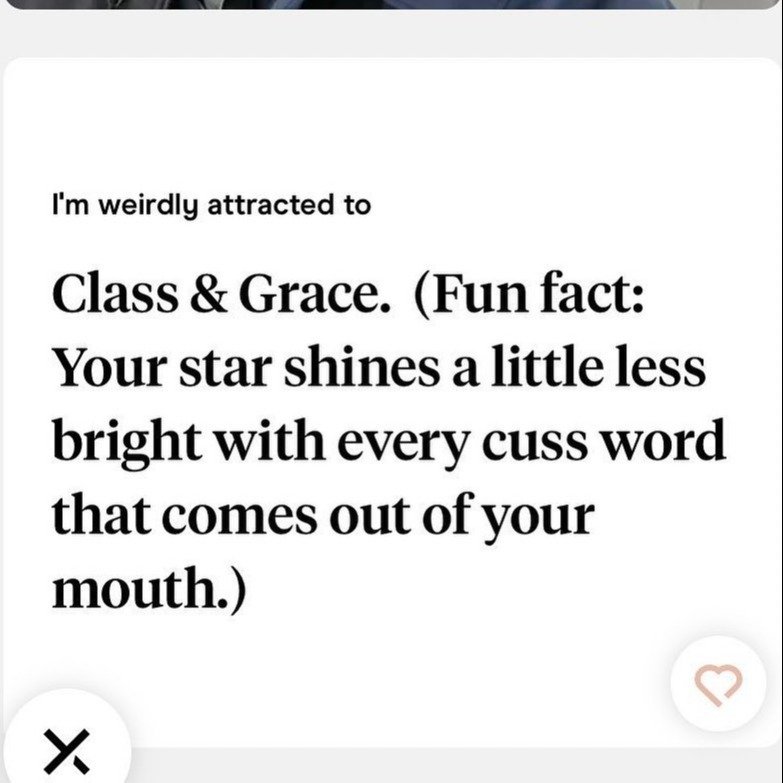 I think it's probably too late to save me and my star, but hopefully it's not too late for yours — or else this guy won't think you're very attractive. The horror.

So nice he had to say it twice. 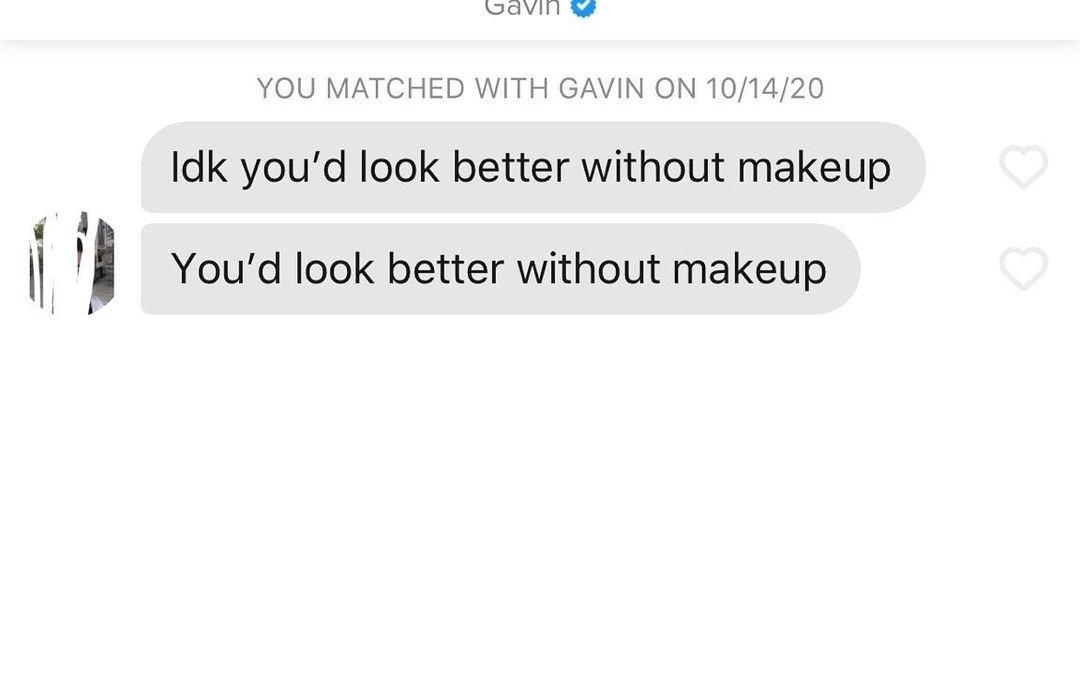 Guys, I know sometimes you mean well when you say this, but just know that no woman wants to spend one to three hours doing something only to be told that it would've been better for you if she hadn't done it at all. Free tip.

Maybe that's what she was going for. 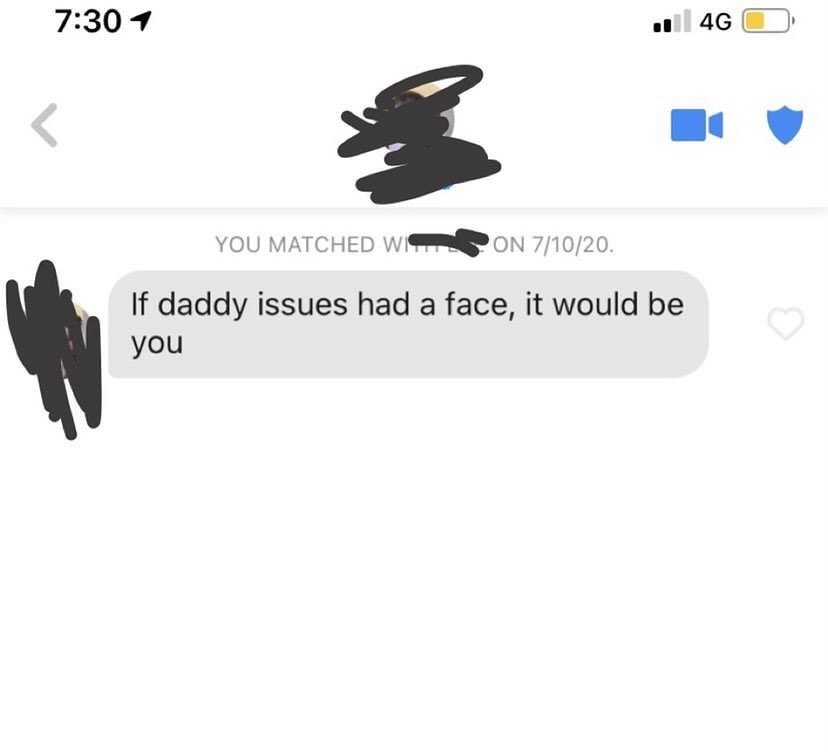 If "the compulsion to send a rude and insulting message as your opening line on a dating app" had a face, I think I'd know a contender for that one too.

What are the odds. 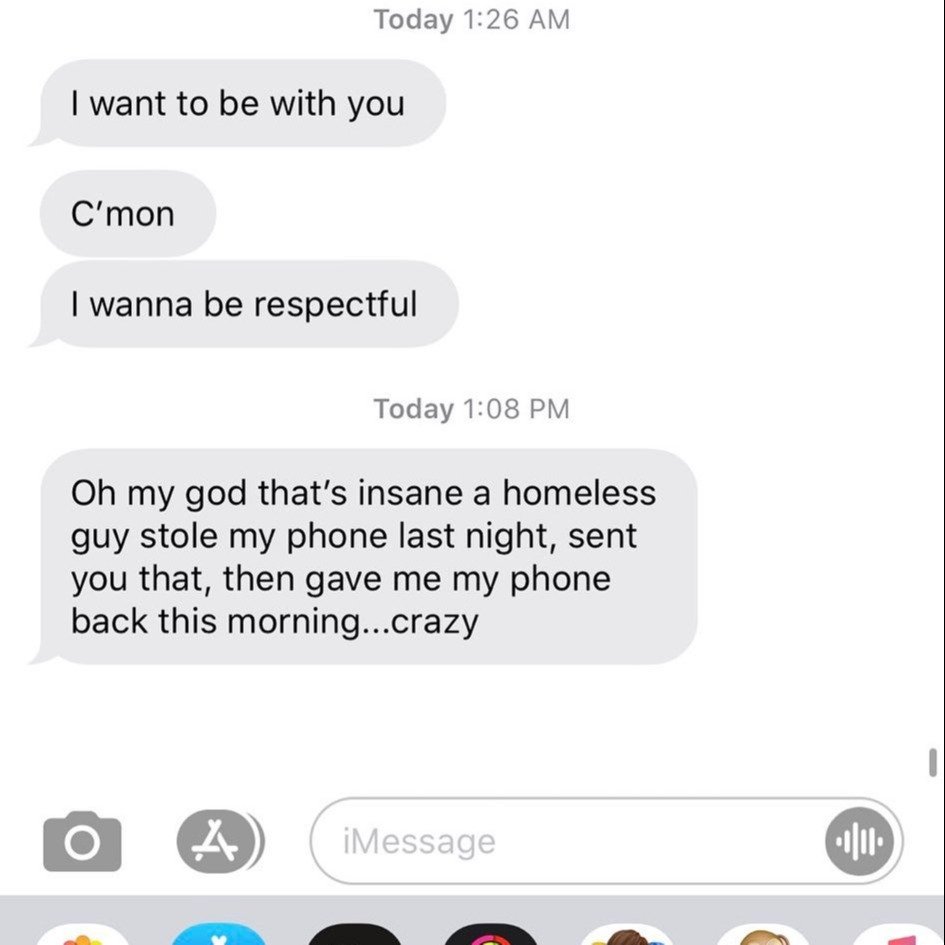 Well, at least he gave it back. It looks like his goal of being respectful might just come true after all. 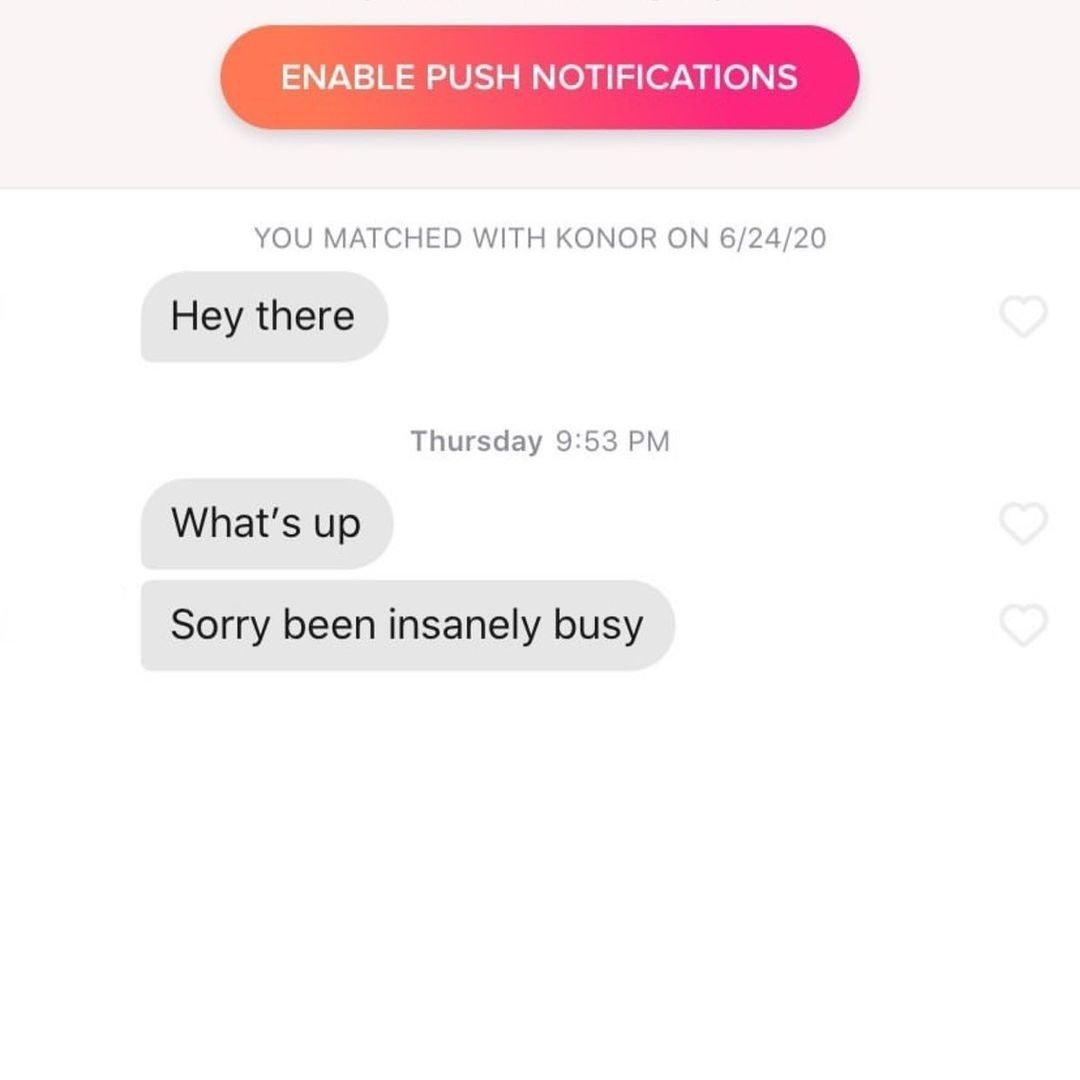 Honestly, I kind of admire this guy's strategy. You can't fire me, I quit kind of vibes. Commendable in this day and age.