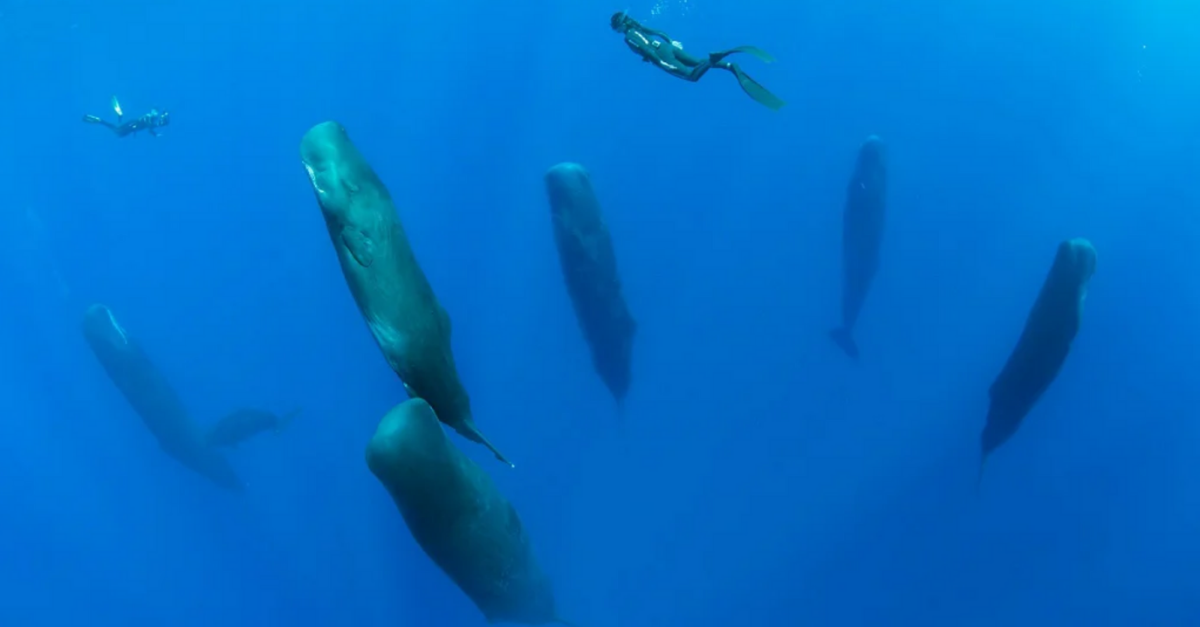 20 Pics That Managed To Attract Some Serious Interest

Although this quote often gets attributed to T-Pain, it was former New York Yankee Outfielder Oscar Gamble who famously said, "They don't think it be like it is, but it do."

He was talking about organizational problems with the team at the time, but over the years, we've realized that his words can apply just as easily to the world at large.

Indeed, there are many ways in which it seems like the world should or shouldn't work, but closer study of even the most mundane things can sometimes reveal something that flies in the face of all our assumptions.

And while it's easy to get sick of shocking surprises that confuse and scare us, it's oddly refreshing to come across some that simply pique our interest.

Although these are vegetables growing in Washington D.C., it's best not to eat them. 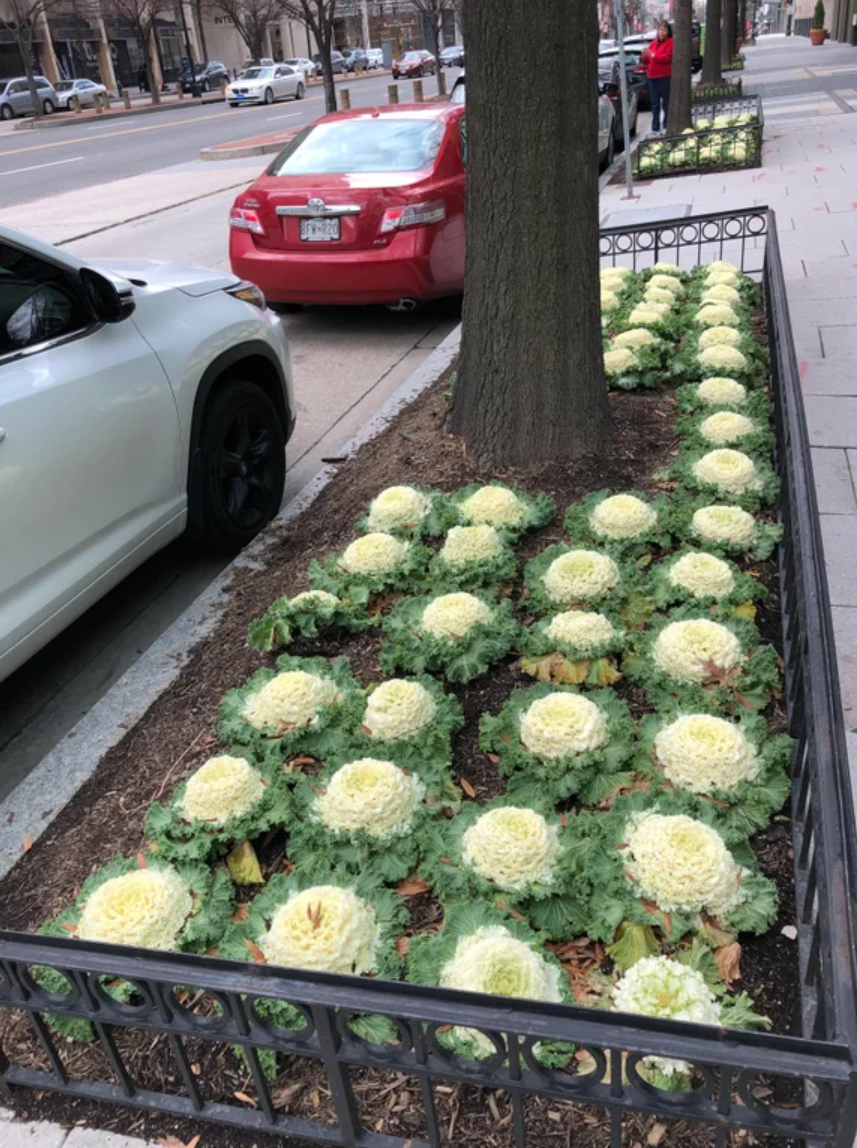 Technically, the ornamental kale we see here is edible, but it apparently has an incredibly bitter taste that would turn most people all the way off.

As the common name would suggest, this kale that looks a lot like cauliflower is instead bred for decorative purposes.

These editions of the Fort Worth Star-Telegram came out on the same day and show that it doesn't take long for everything to change. 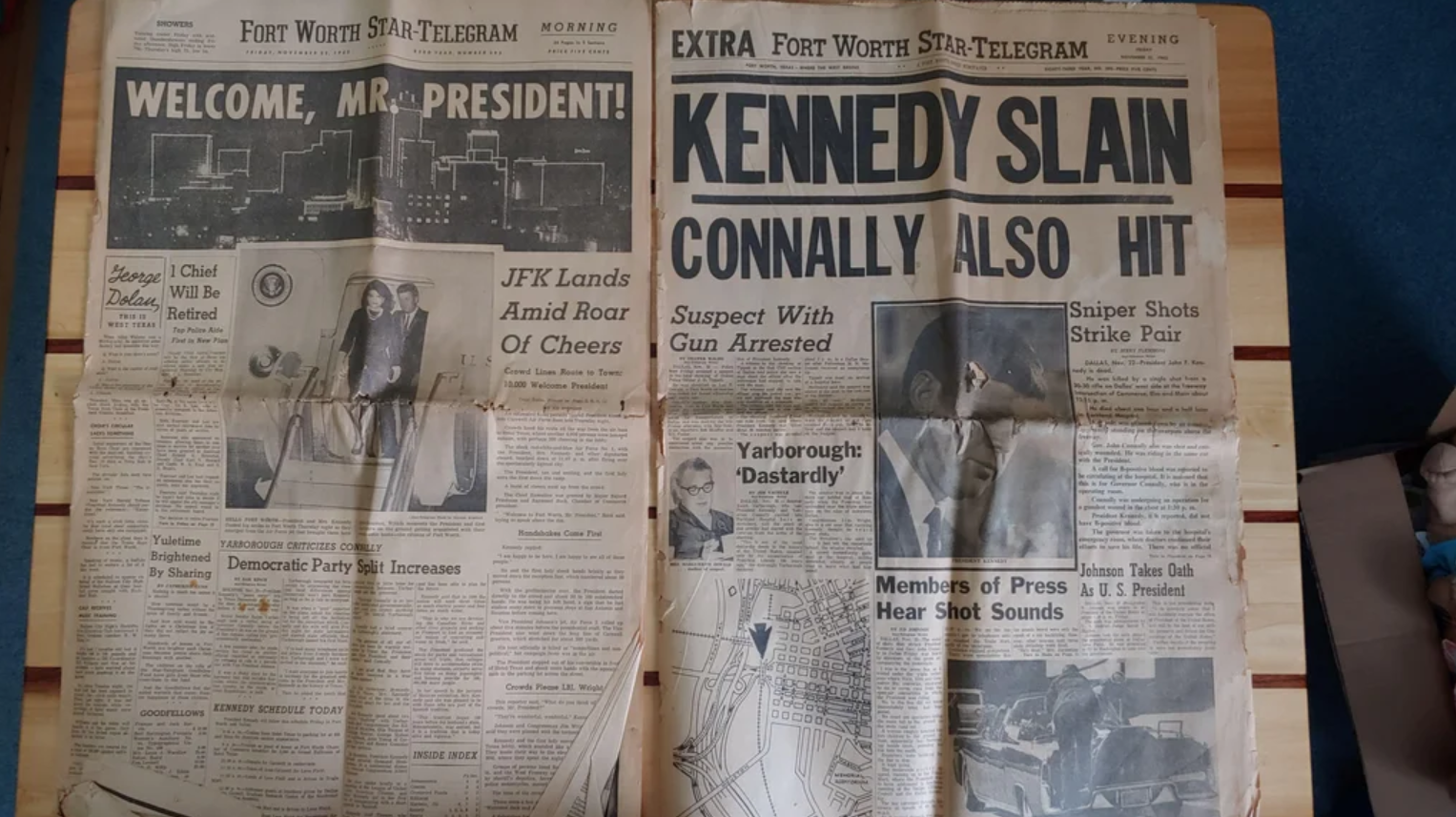 While the first edition to hit the streets on November 22, 1963 consisted of a big splash page announcing then-President John F. Kennedy's arrival in Dallas, Texas, this evening edition obviously had much more to report and none of it good.

While a tree's rings can clearly mark its impressive lifespan, they aren't only plants that can stick around for a while. 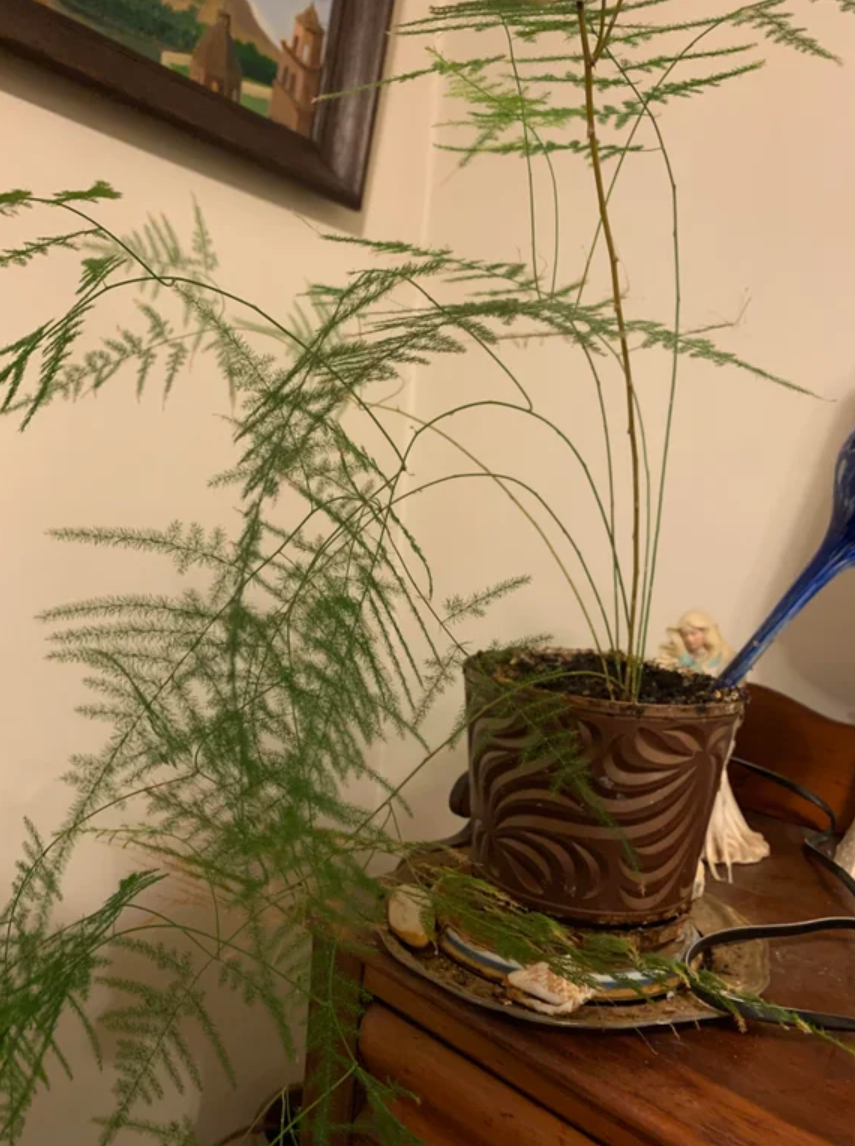 The uploader's great-grandmother gave their grandma this plant back in the 1930s, and she's apparently been taking care of it ever since.

Yeah, I wouldn't have guessed that it could survive for almost a century either.

You probably don't often get the chance to see a two-headed snake and there are a few big reasons for that. 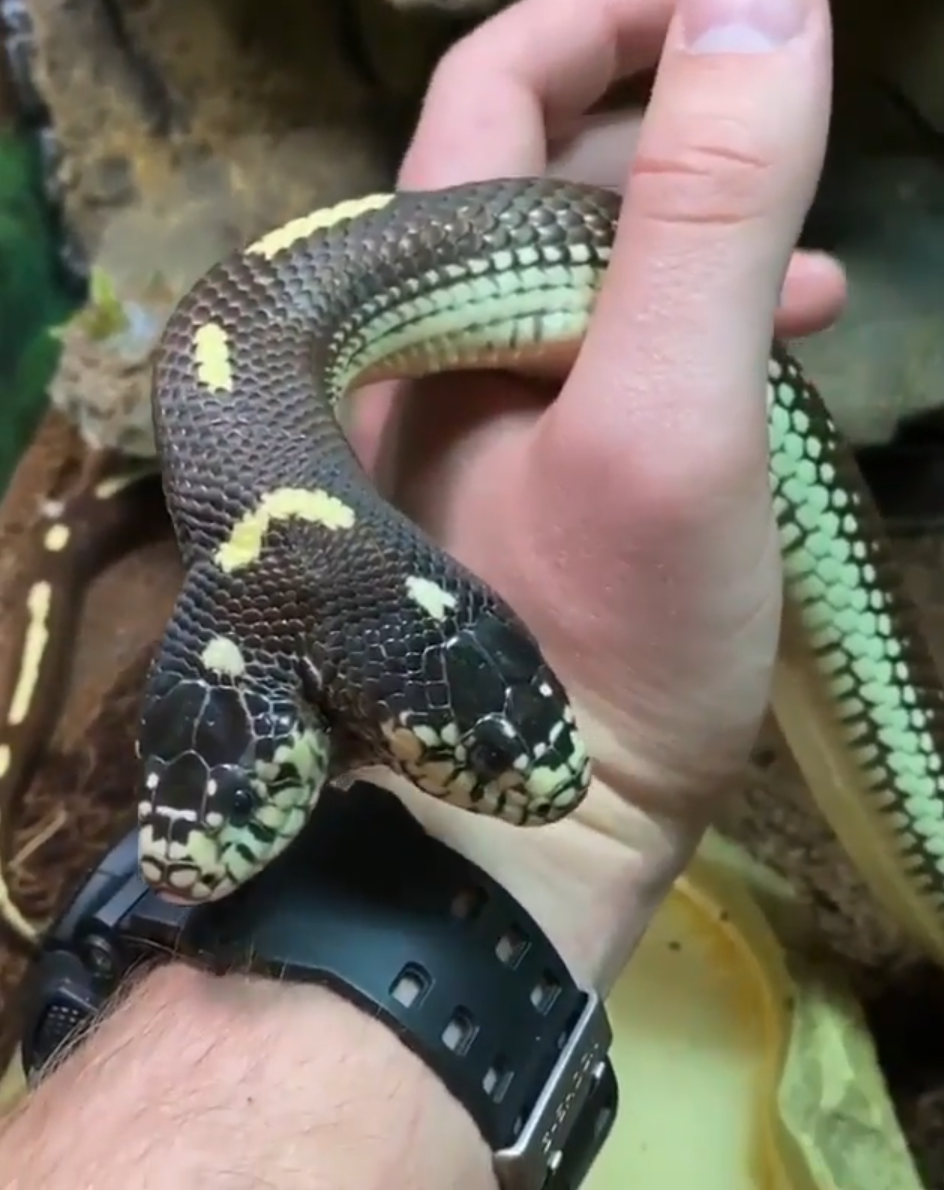 As The Guardian reported, two-headed snakes tend to be slower, which makes them easier targets for prey.

The heads also tend to fight each other over food because they aren't capable of understanding that it goes to the same place no matter which head eats it.

When a pipe bursts, it can do a lot more damage than one might expect. 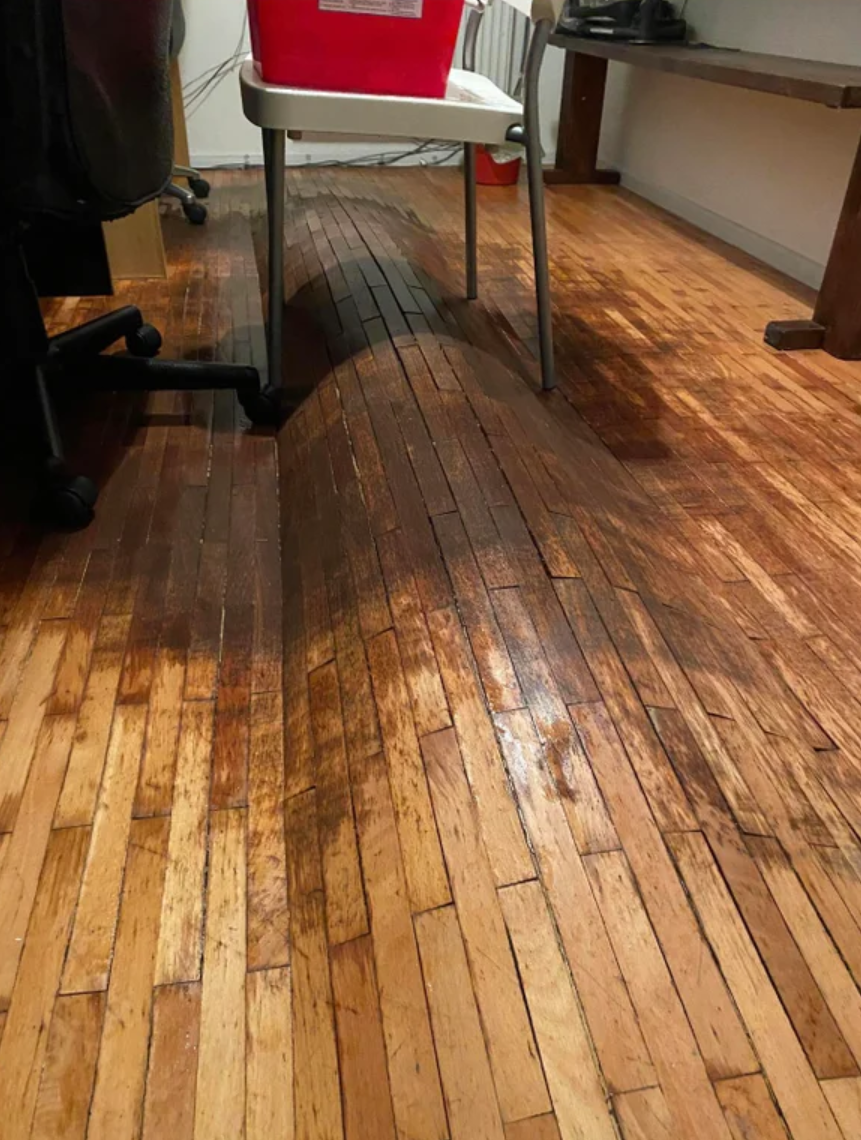 The wetter wood gets, the more it expands because of the moisture it absorbs. And when it's laid as closely together as the planks in hardwood floors tend to be, the only direction it can expand is upwards.

This globe has a few additional details and its three-dimensional design isn't just for decoration. 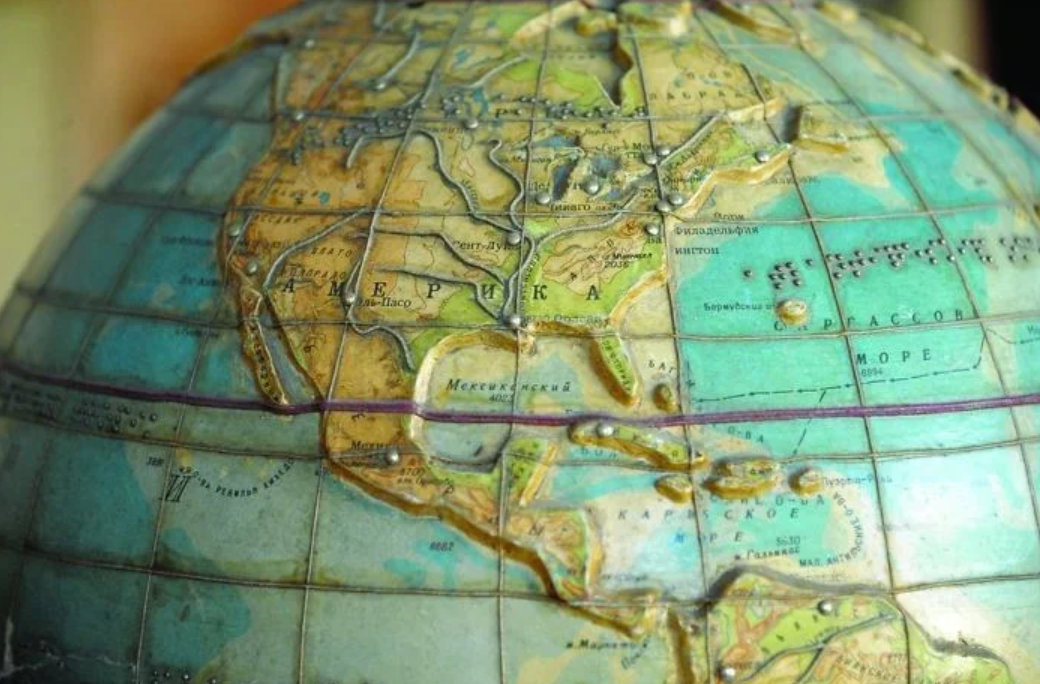 Instead, these raised continents are intended to help blind people get a sense of which part of the world they're studying.

Not only that, but this (apparently Russian-made) globe also includes some Braille captions to make it clear what ocean or continent is under someone's fingertips.

This is known as a ghost apple and something very specific needs to happen to create one. 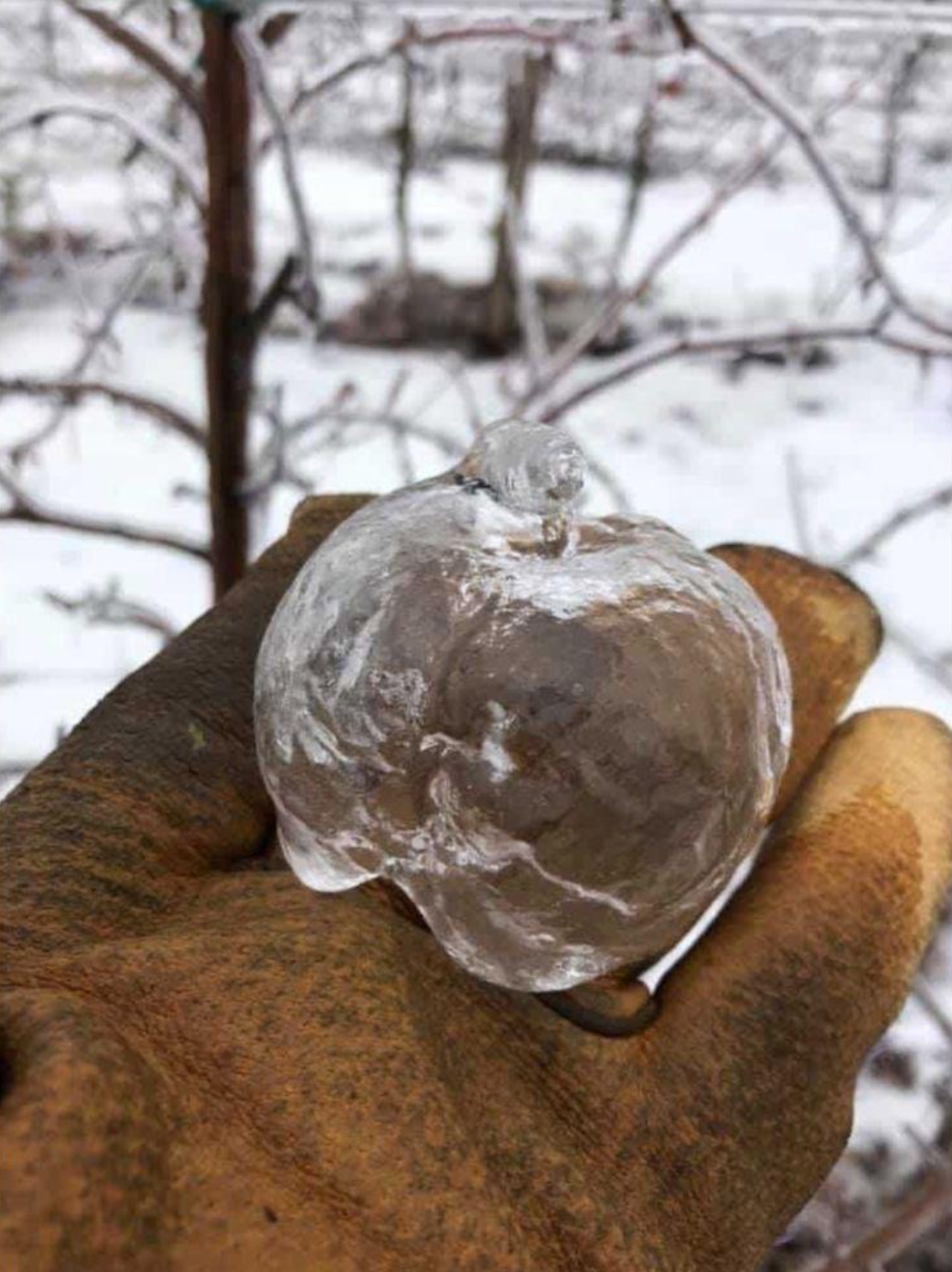 First, we need an apple that's still hanging around in the orchard, but has already started to rot. Then, we need freezing rain to coat the rotting apple in ice.

Once this happens, the apple will finish rotting and simply leak out of the bottom of the ice formation, leaving a "ghost" of itself behind,

When this flag sticker was first placed here, it wasn't missing its stripes. 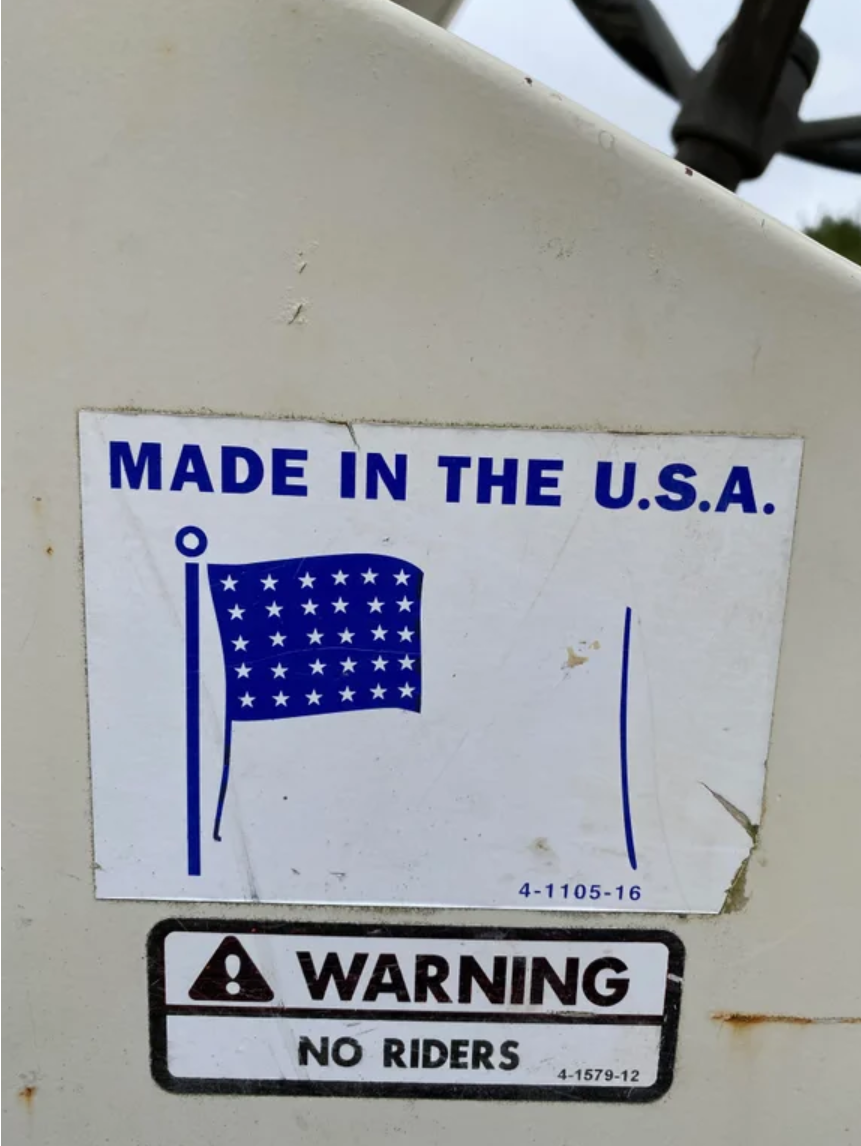 The problem is that red is one of the first colors to wear away when enough UV rays hit it, which is at least partially because it absorbs the sunlight better than blue or white does.

So once this sticker has the sun beat down on it for long enough, we can have all the red fade away until we're left with half of the flag's image.

As far as anyone knows, this was the first handshake in recorded history.

It's unknown whether the practice existed before Assyrian king Shalmanzer III met Babylonian king Mardukh Zaciri ‏in ninth century BC or whether they invented it, but we can clearly see them doing it here.

Christmas Island, an Australian territory near Indonesia, is home to a pretty intense crab migration when the right time of year hits. 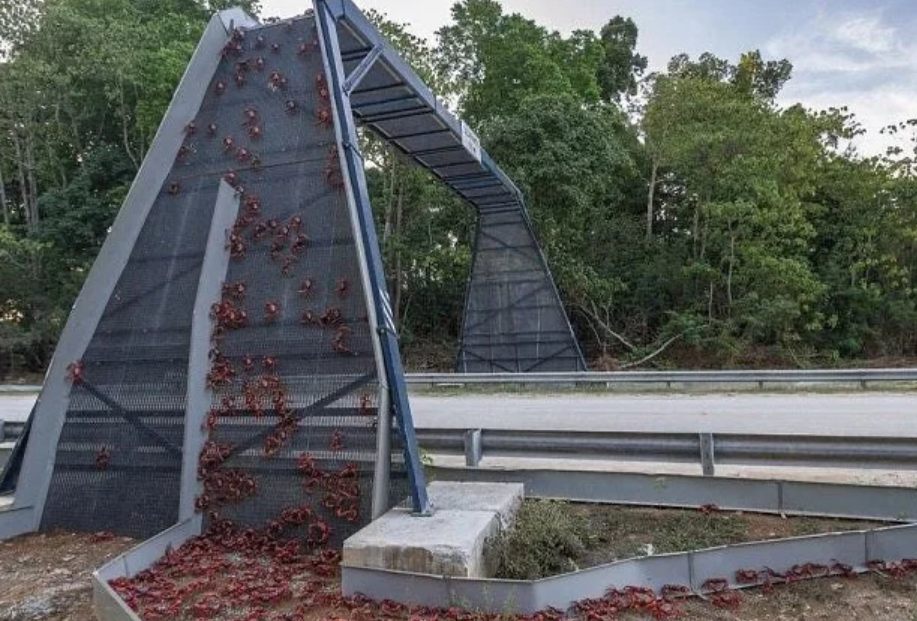 Unfortunately, part of that migration path happens to cross a pretty busy highway, which would normally kill a lot of these crabs.

However, urban planners designed a bridge specifically for these crabs to safely get across. As we can see, it's built in such a way that the only path these crabs could possibly take is across it.

Back during the excitement of Expo '67 in Montreal, Canada, this cubist complex seemed to express the future of apartment buildings. 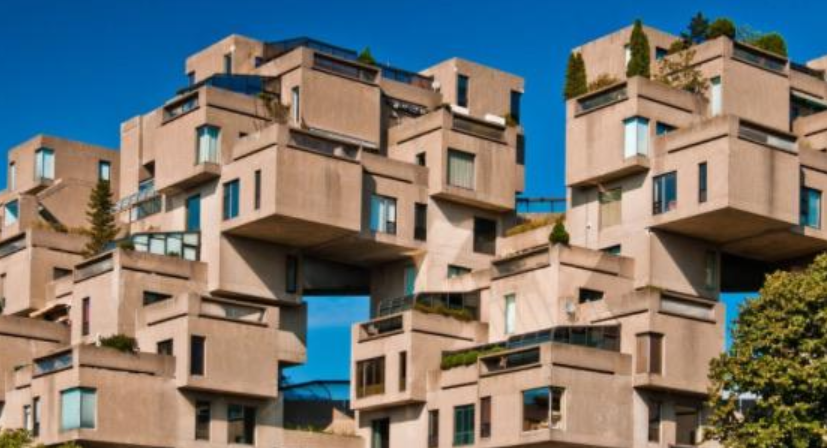 As The Guardian reported, it's called Habitat 67 and architect Moshe Safdie wanted to create an apartment building that felt like a cluster of little houses with rooftop gardens and "streets" between them.

However, not only did the structure (and therefore, the rent) turn out to be way more expensive than anticipated, but it was also prone to water getting into the concrete, which then allowed mold spores to travel through its ventilation system.

This 17-year-old built a 14-inch wide telescope that's apparently larger than the one at his local observatory.

Not only that, but it's apparently not even the biggest telescope he's made so far. As he wrote, it's his third-largest for now, but he also claimed that he's building another that will push it even further down the rankings.

Dream Lake in Colorado looks like its waves are rippling with activity, but they're actually frozen solid. 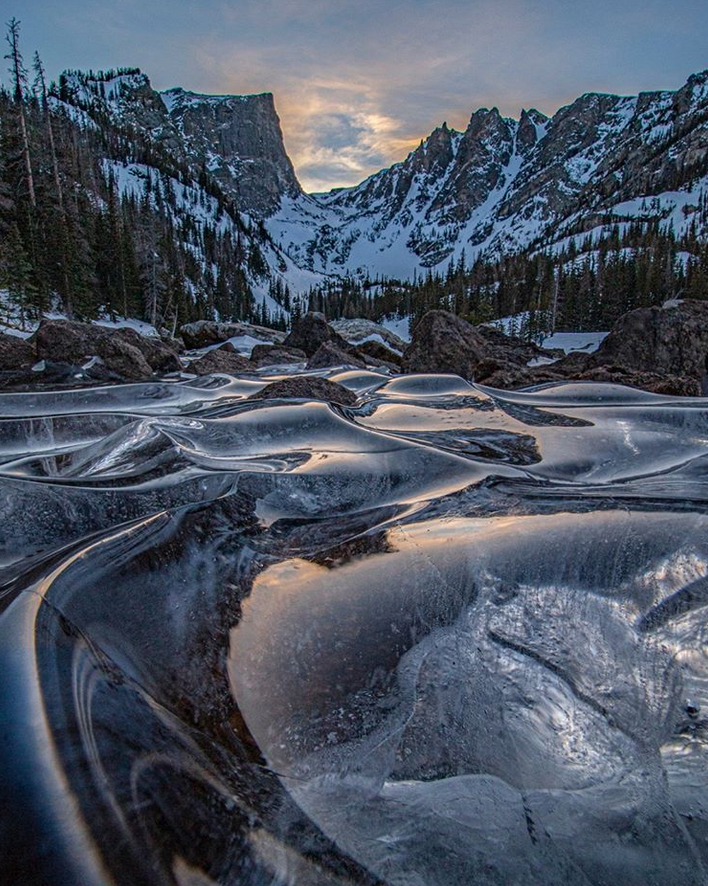 As for how this is possible, the U.S. Department of Interior wrote on Instagram that snow on the surface would melt, get pushed around by the wind and then freeze again.

These wild "waves" are the result of that process happening over and over again.

This would definitely make for a bizarre sight, but what's happening here is pretty normal. 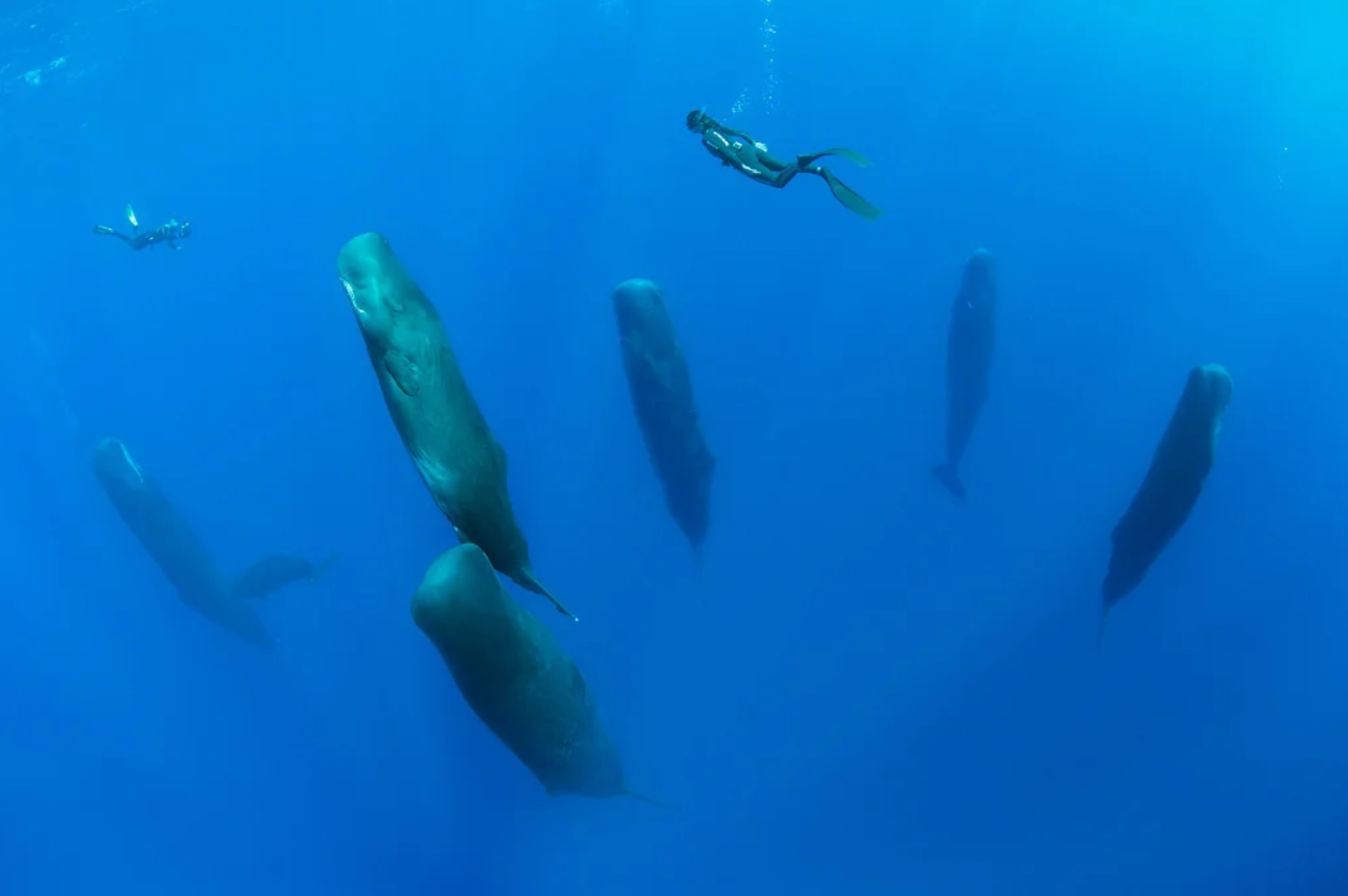 Here we see a group of whales sleeping. According to National Geographic, they're relatively close to the surface when they're in these positions and only spend about 7% of their day like this.

Their sleep usually comes in 15-minute bursts and they're believed to be one of the least sleep-dependent animals in the world.

Although this apartment building in Alba Iulia, Romania weighed 7,600 tons, it was nonetheless picked up and moved to make room for a boulevard. 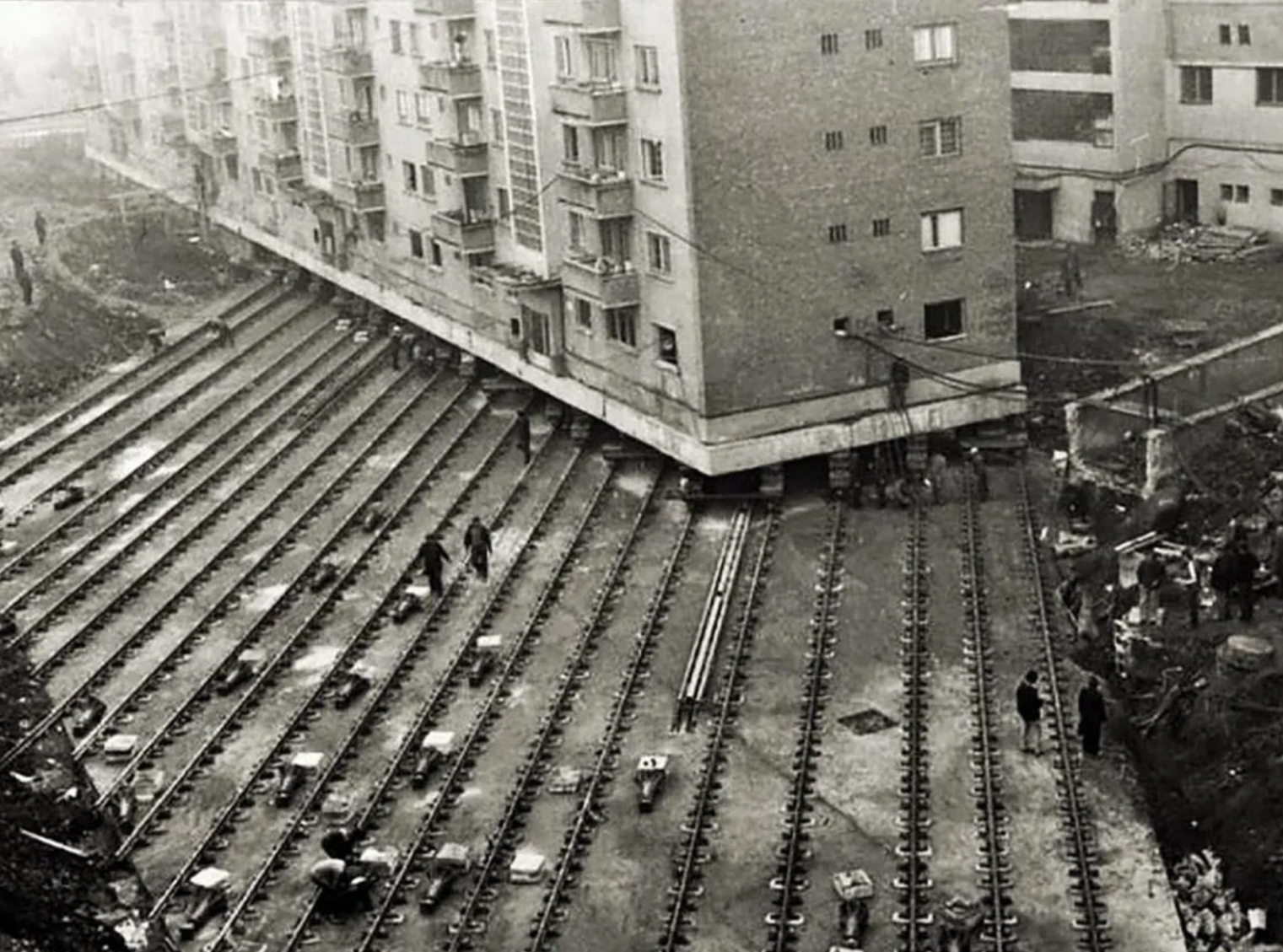 According to the city's website, this was accomplished by splitting the building in half, placing its parts on a network of hydraulic jacks, and then placing them on giant wheels that moved along the railways we see here.

Many of the building's residents reportedly remained inside for the process, which thankfully went without incident over the course of six hours on May 27, 1987.

The outer shells of these homes in The Netherlands were made using a 3D Printer.

As The Guardian reported, this "printer" technically consists of a robotic arm that spurts out a specially-designed cement with the texture of whipped cream and adds layer after layer of it until they have the results you see here.

This idea is supposed to be a solution to an apparent bricklayer shortage in the nation and future plans involve making the entire houses this way, rather than just the exteriors.

While homeowners often discover odd features left by their home's previous owners after they move in, some are too subtle to notice right away. 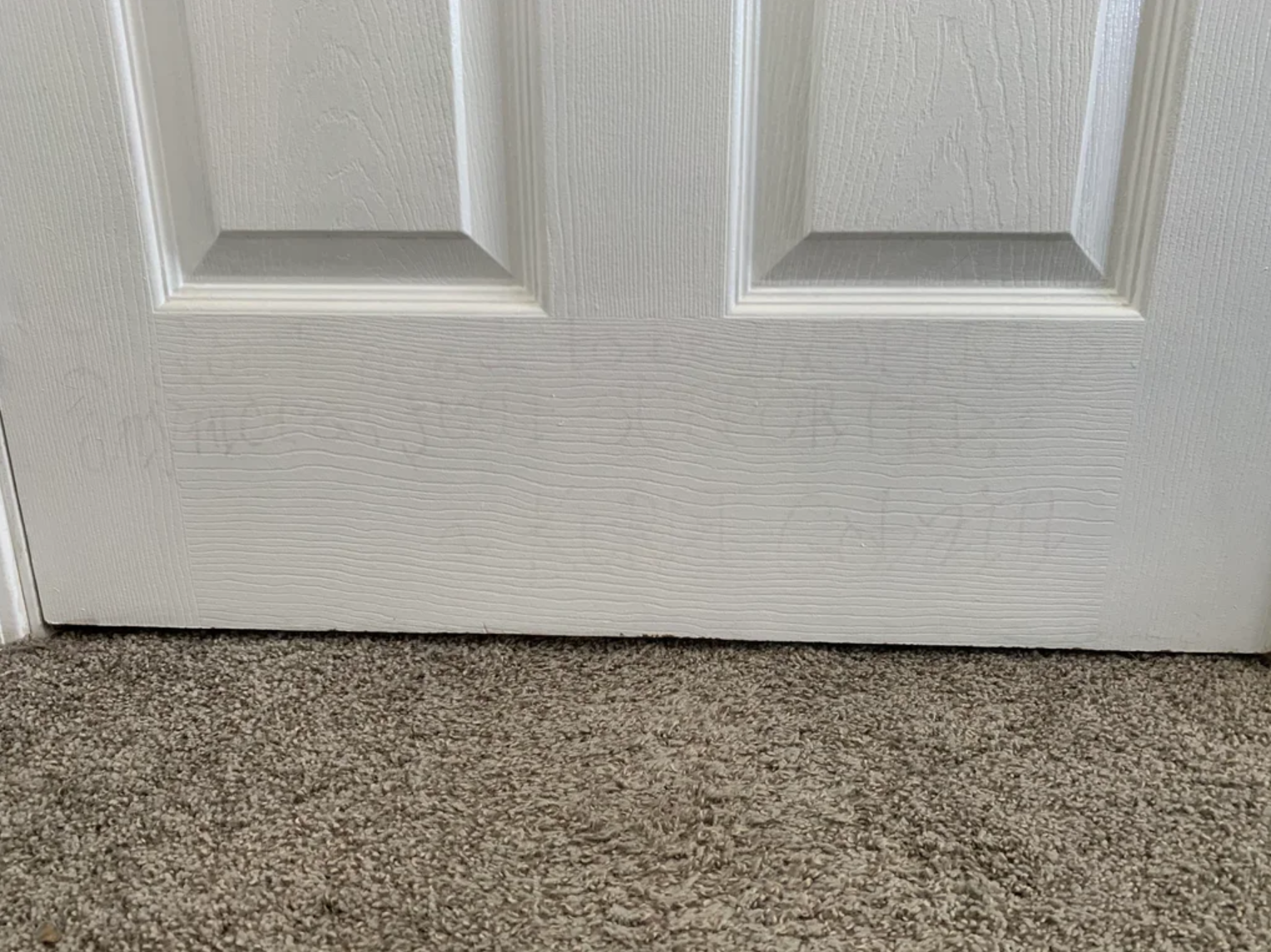 In this case, the uploader lived here for about a year-and-a-half before they noticed that someone had scratched a Kurt Cobain quote into this door.

It's a little hard to make out, but it says, "I don't need to be inspired anymore, just supported."

This cup split perfectly in two as soon as someone poured some hot water into it. 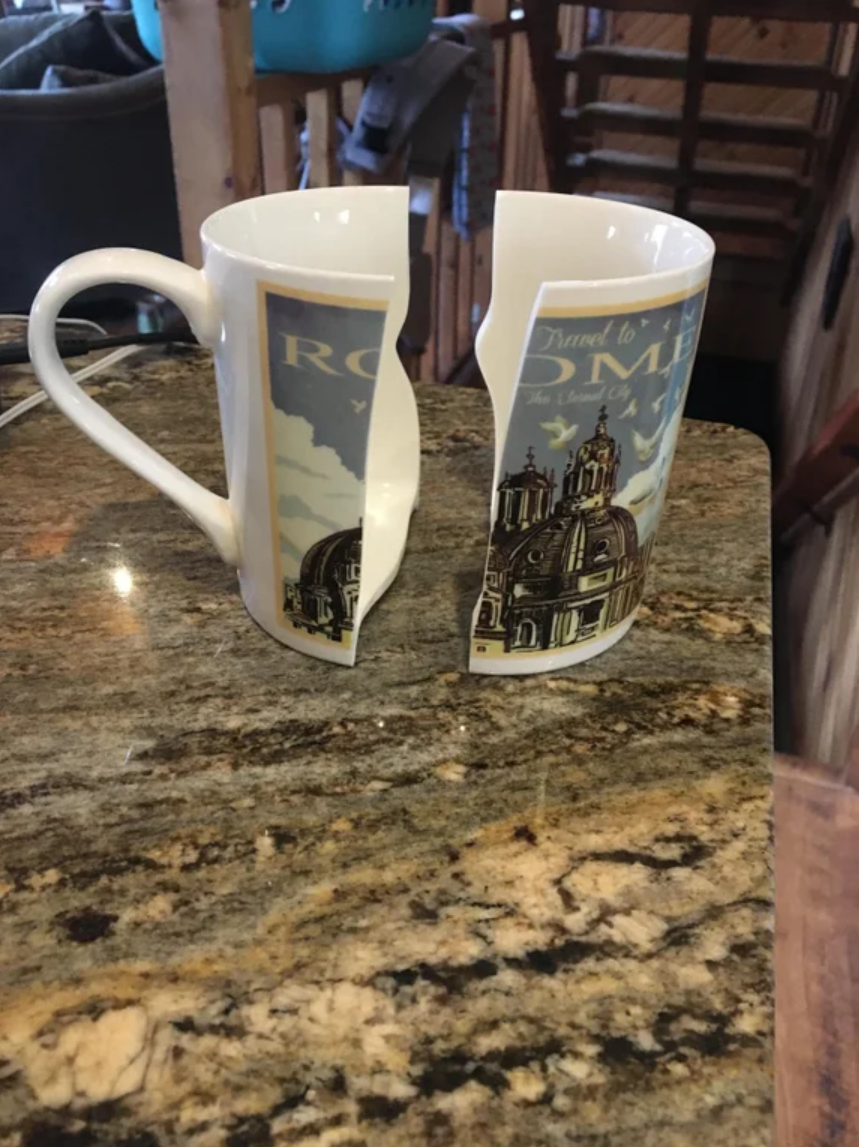 While the clean, even nature of the the break was pure chance, the fact that it happened at all demonstrates a principal called thermal shock.

Much as you can create an intense reaction when you throw a cold stone into a campfire, pouring hot liquid into a mug on a cold, marble surface can ruin a mug pretty quickly.

In 2005, the Duchess of Northumberland had what is known as a "poison garden" installed in Alnwick, England.

As opposed to regular flower gardens planted for a lovely visual or a vegetable garden planted for food, these gardens collect and educate the public about various plants that can either kill or harm a person, cause them to hallucinate, or both.

I've visited a similar garden at Blarney Castle in Ireland and it's pretty fascinating and cool to behold.

As we can see, the pattern on this bra is designed to resemble the feeling of a hand in each cup. 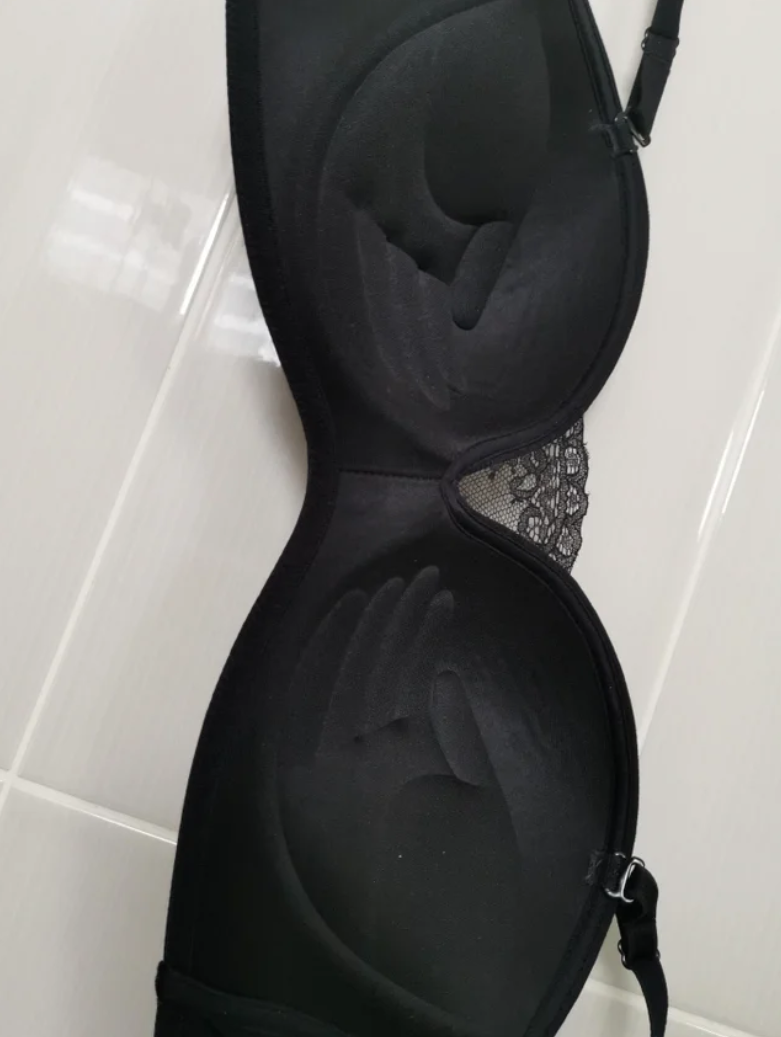 This is apparently specific to a certain brand of bra, so it's not like thousands of customers have secretly been wearing this all along.