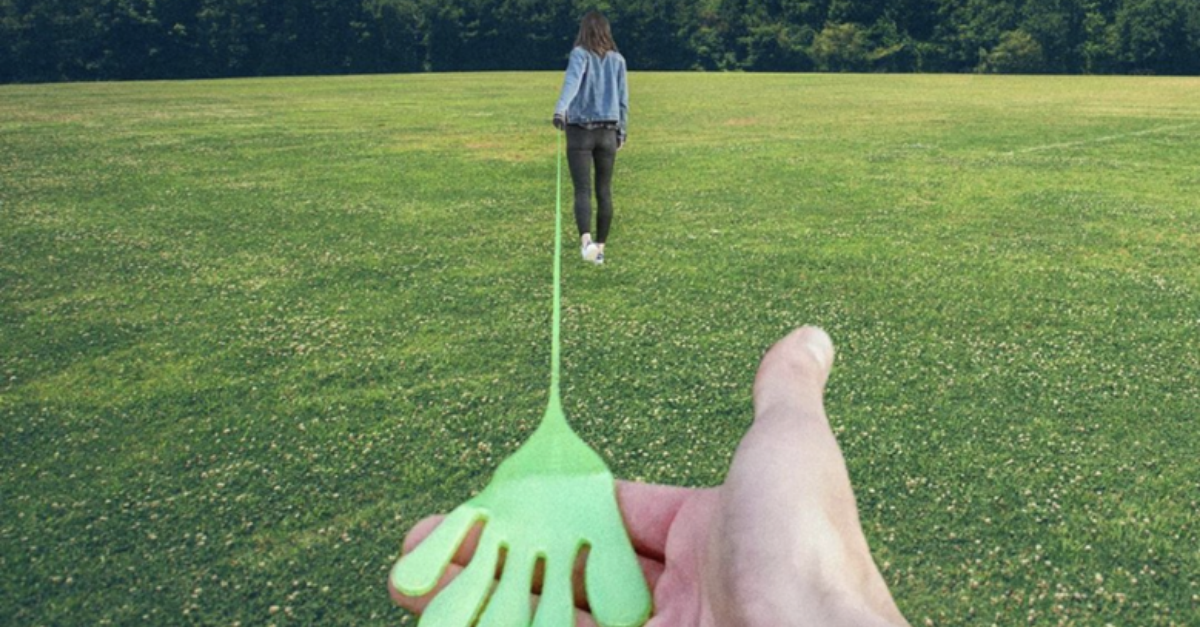 As a kid, I always colored outside the lines. This wasn't because I wanted to rebel against how we were supposed to do things, but rather because I always found coloring boring and wanted to get it over with as quickly as possible.

It doesn't help that I'm not exactly the most dexterous person in the world.

But for some kids, those scribbles were made for the opposite reason. They were super into what they were doing and that excitement made things a little messy. And I can only hope that those kids took that attitude into adulthood because as long as it's not hurting anybody, what one is "supposed to do" can often take a backseat to what actually makes us happy.

And I wouldn't be surprised if the people (and one chicken, since I know somebody will bring that up) we're about to meet today never stopped being that adorably enthusiastic kid.

Apparently, the uploader's dad keeps turtles and they had some big ambitions for them. 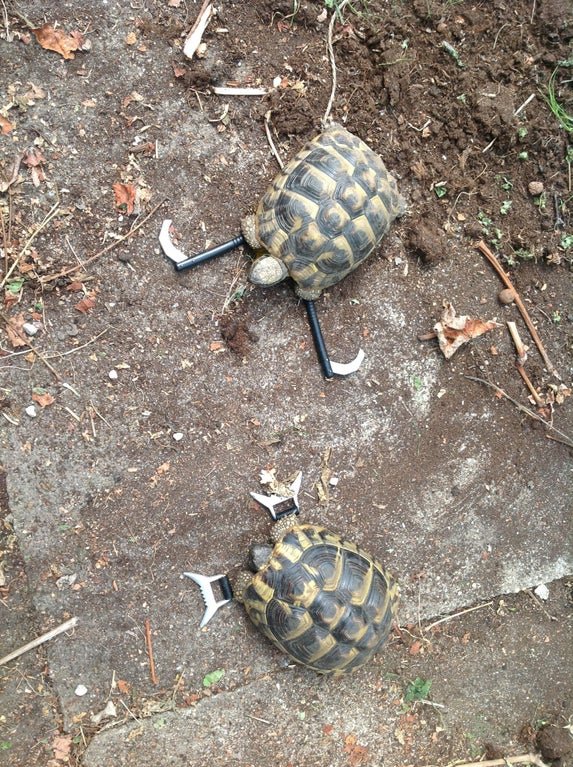 Now that this person has started training these turtles, they figure it's only a matter of time before they have their own personal bodyguards.

This label is technically correct, but entirely misleading in a way that'll probably frustrate everyone and amuse themselves. 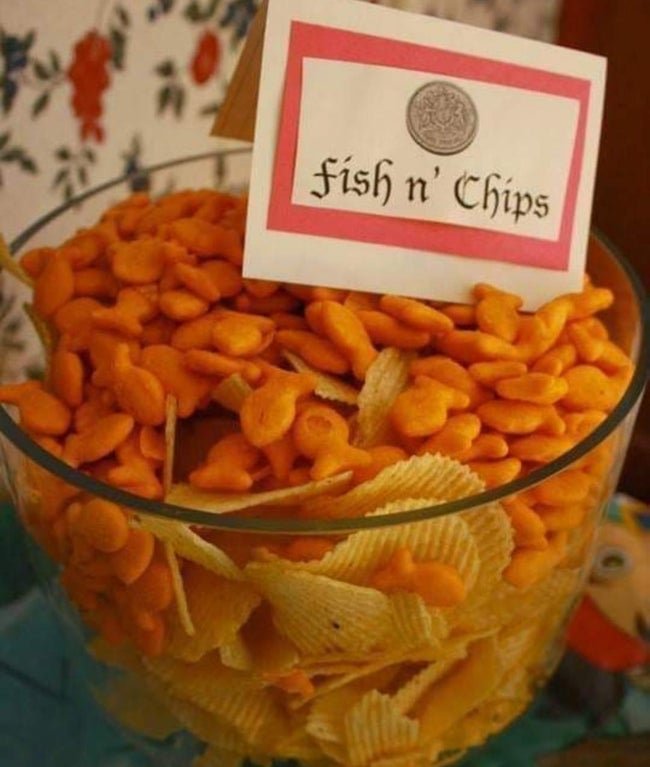 I've already seen one British commenter express how much they hate this. Not just because of the goldfish, but because they tend to call potato chips "crisps."

But there's only so much frustration we can feel about that little bait and switch after we see this one. 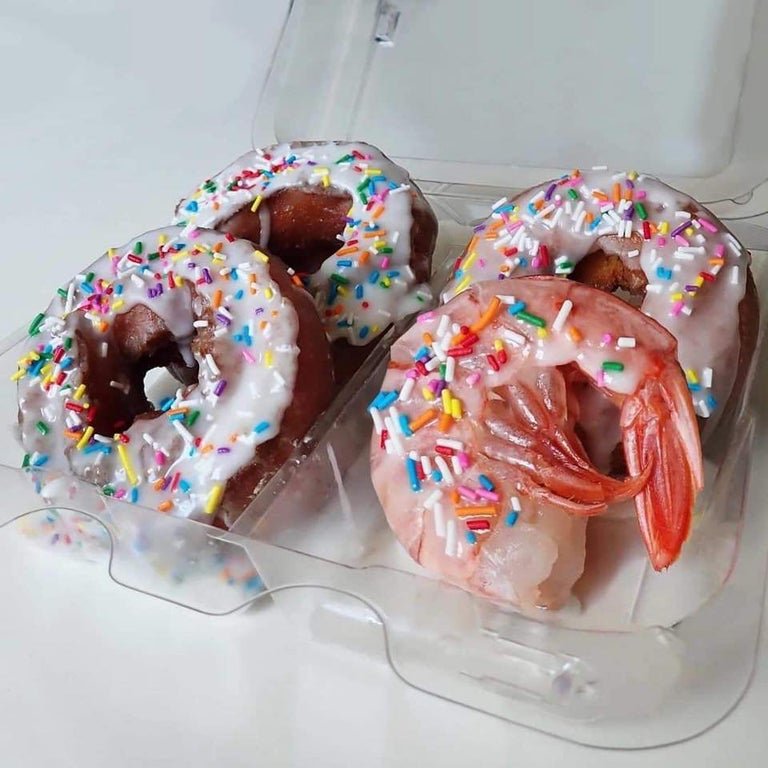 I'm not sure whether those are small donuts or that's a massive shrimp, but I'm not sure I want to find out how well sprinkles go with seafood.

This cat may not be so amused about its predicament, but it's still being a pretty good sport. 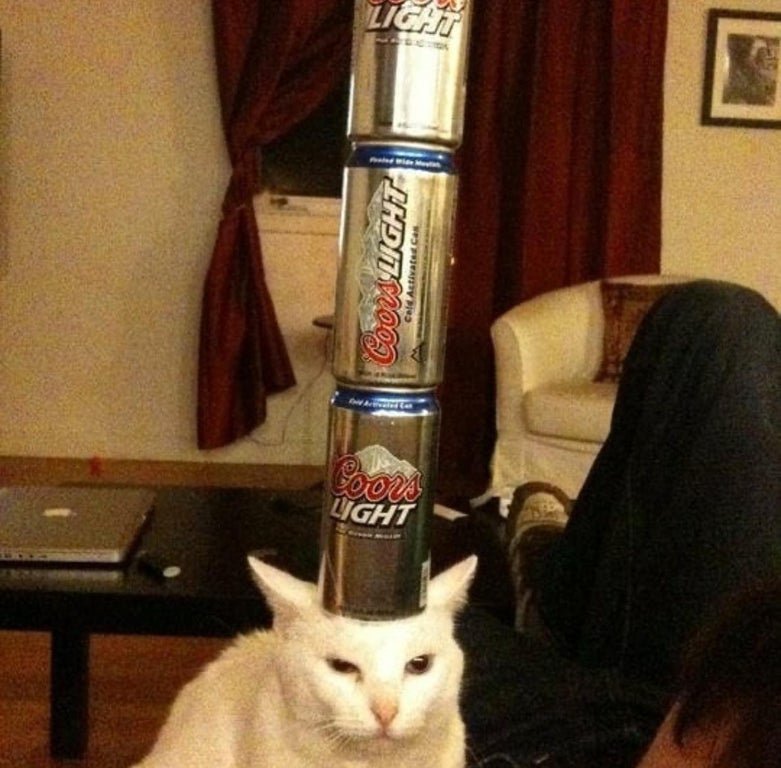 After all, how many people can say their cat would let them balance three cans on its head?

This person may be a drunken cat whisperer, but they're apparently still just as effective when rambling incoherently.

I should warn you that you might find this a little gross, but I can't help but respect how ambitious someone was with their dead skin.

I'm also not sure how good of a guitar pick this will be, but it seems happy enough. One thing's for sure, though. Nobody will mess around with your instrument as long as this is attached to it.

I've seen some wild taxidermy in my time, but this one looks like the result of some kind of bold genetic experiment. 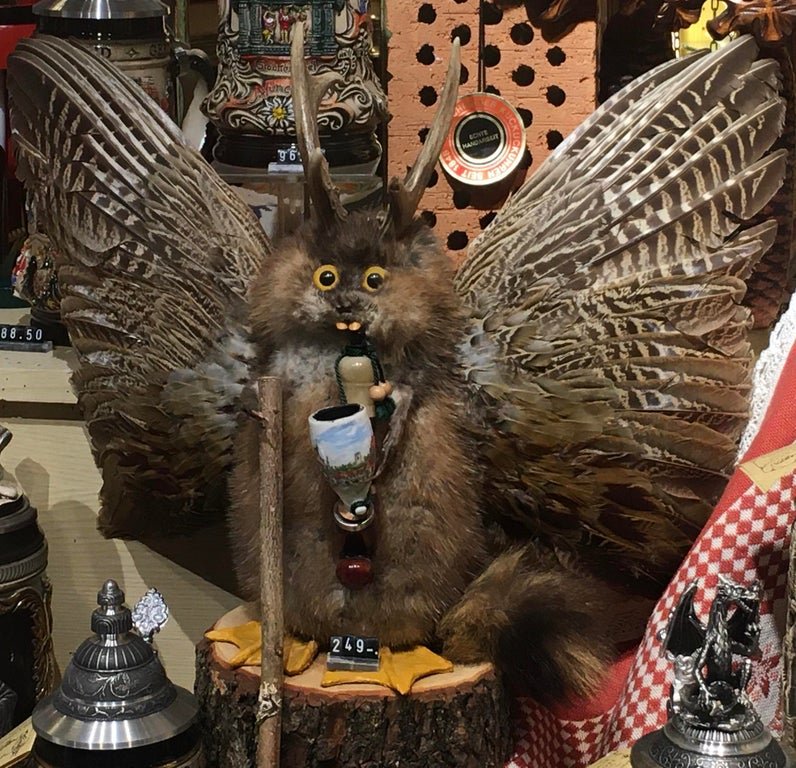 Apparently, someone made this as a means of recreating a Germanic folk creature called a Wolpertinger.

It's part duck, part beaver, and part whatever they got those horns from. Am I the only one who actually thinks it looks kind of cute?

This person made earrings out of their wisdom teeth and I guess they took that "waste not, want not" lesson to heart. 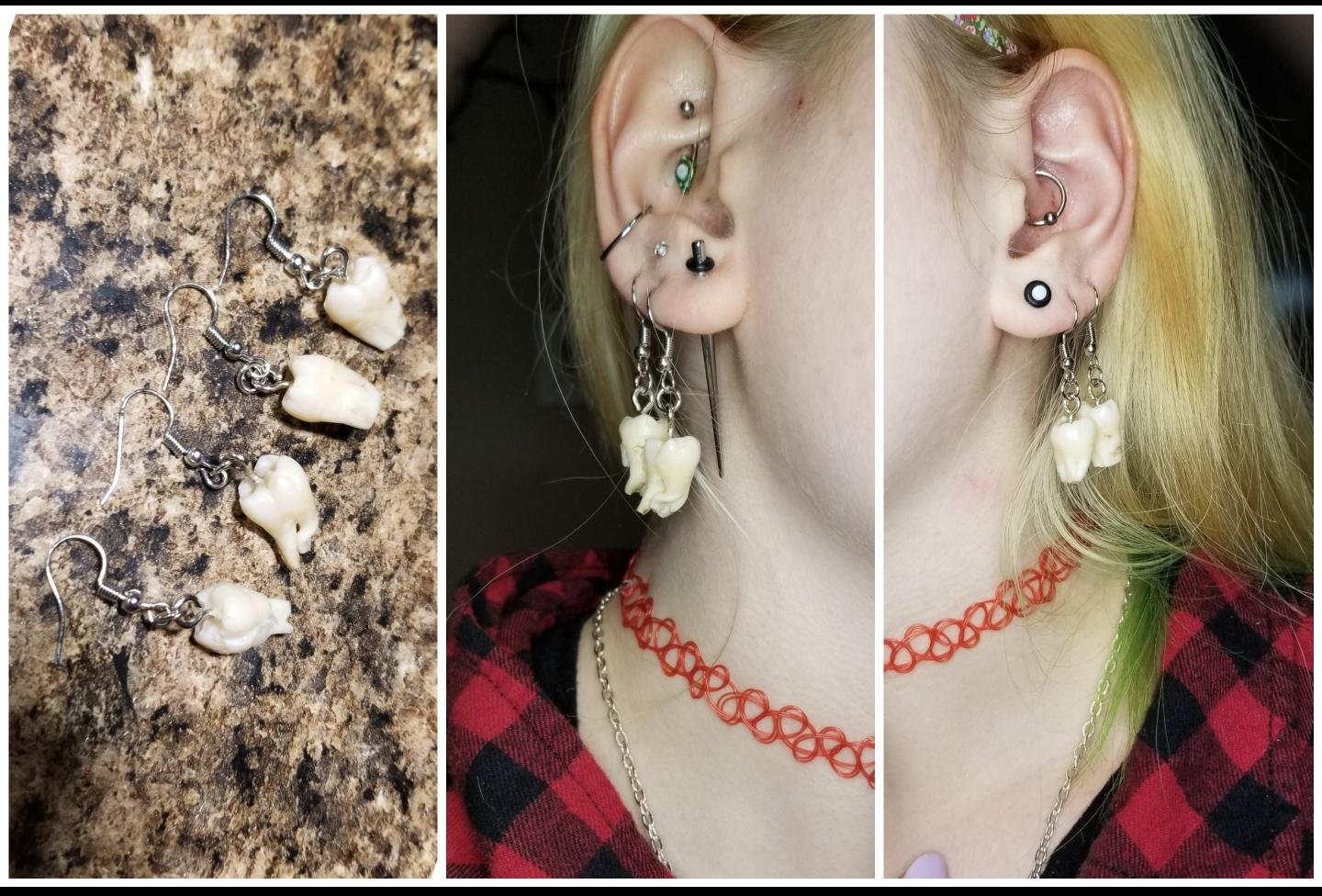 I guess it's just as well that I didn't think of this when I got mine out because I'm not sure they came out intact enough to even do this.

No wonder I looked like the Michelin Man when all was said and done.

I think it's safe to say that this cowboy has the fastest steed in the west. 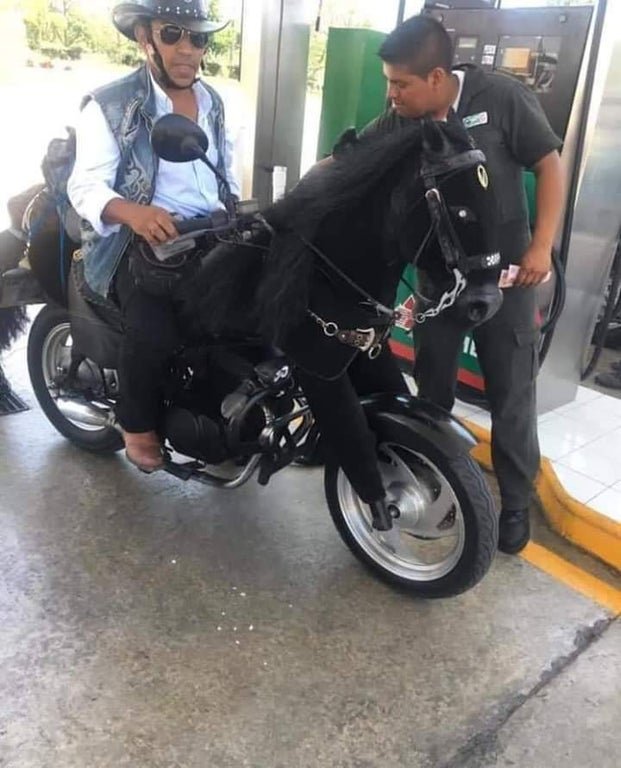 It kind of makes me wonder, though. Is it cheaper to take care of a horse or to maintain a motorcycle?

I'm kind of leaning towards motorcycle, but I'll admit I don't really have any experience with either of them.

Whatever they were trying to accomplish here, it seems that this snowcat's maker quickly learned that they shouldn't get a new pet. 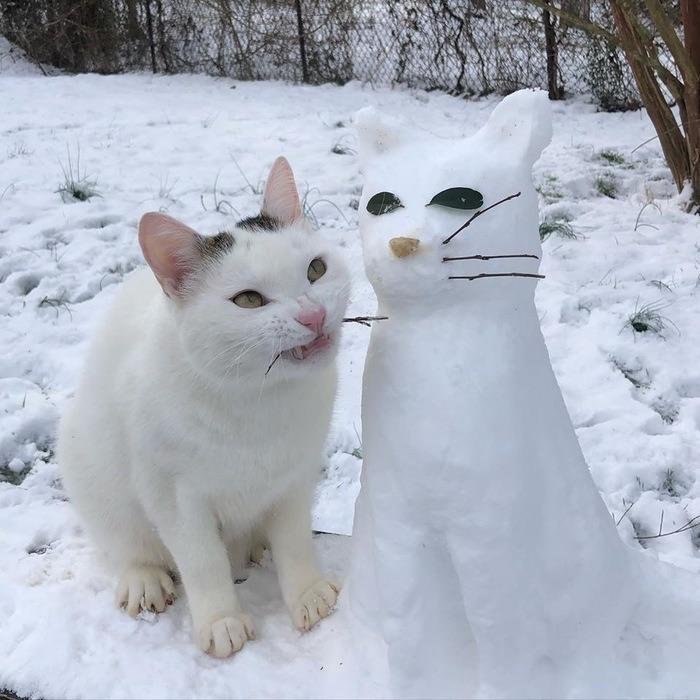 After all, that does not look like the face of a cat that's OK with getting its position usurped.

It wants that impostor to feel every nibble on its "whiskers."

I have to give this guy one thing: He's probably the happiest I've ever seen someone in this situation. 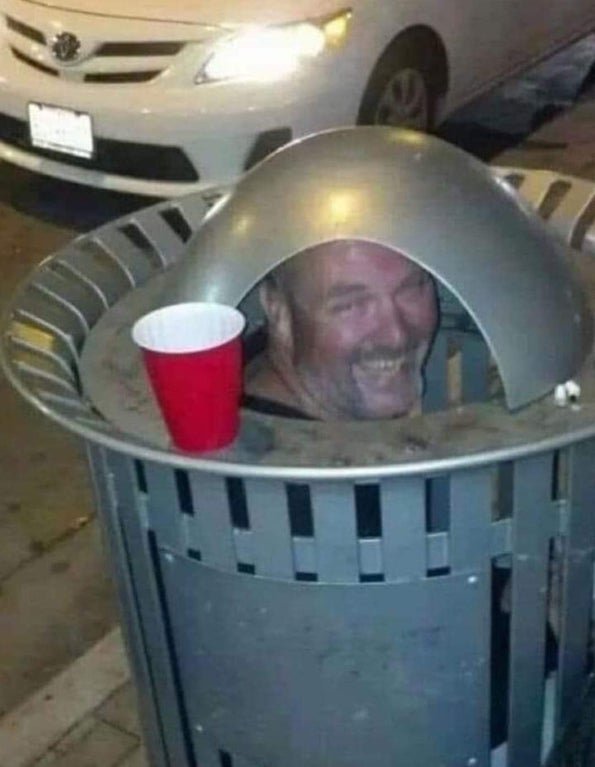 You know how a parent can buy their kid a super elaborate toy only to discover that they're having way more fun with the box it came in?

I guess when you've got skills like these, you look for every opportunity to flex them! 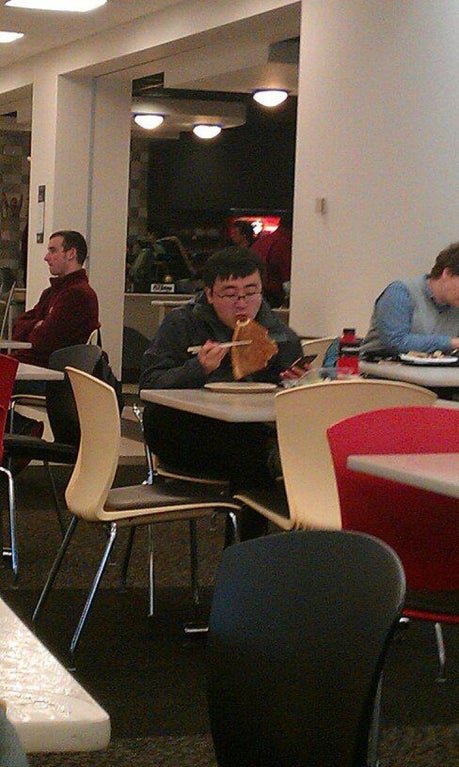 And I have to admit that I would probably do something like this too, but I've established by this point that I am not very dexterous.

Seriously, if you want to be saddened and frustrated at the same time, just watch me try to use chopsticks.

This look is certainly not for everyone, but I admire the commitment to the statement here. 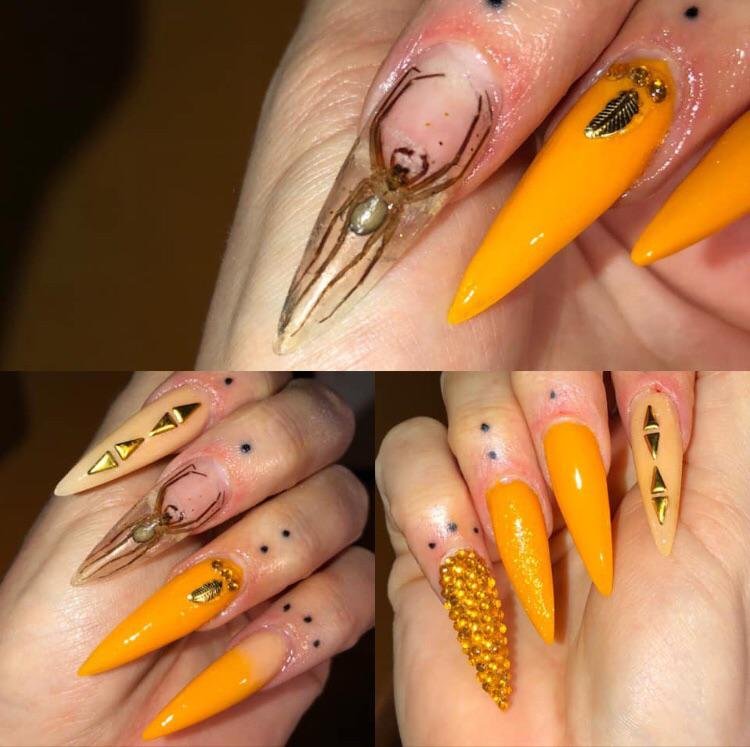 You may think it's gross and you'll likely have even stronger feelings if you're an arachnophobe, but I think it's still hard not to admit that this is pretty metal.

Ah yes, somebody had the consideration to get a nice large tank for their lovely pet...pickles? 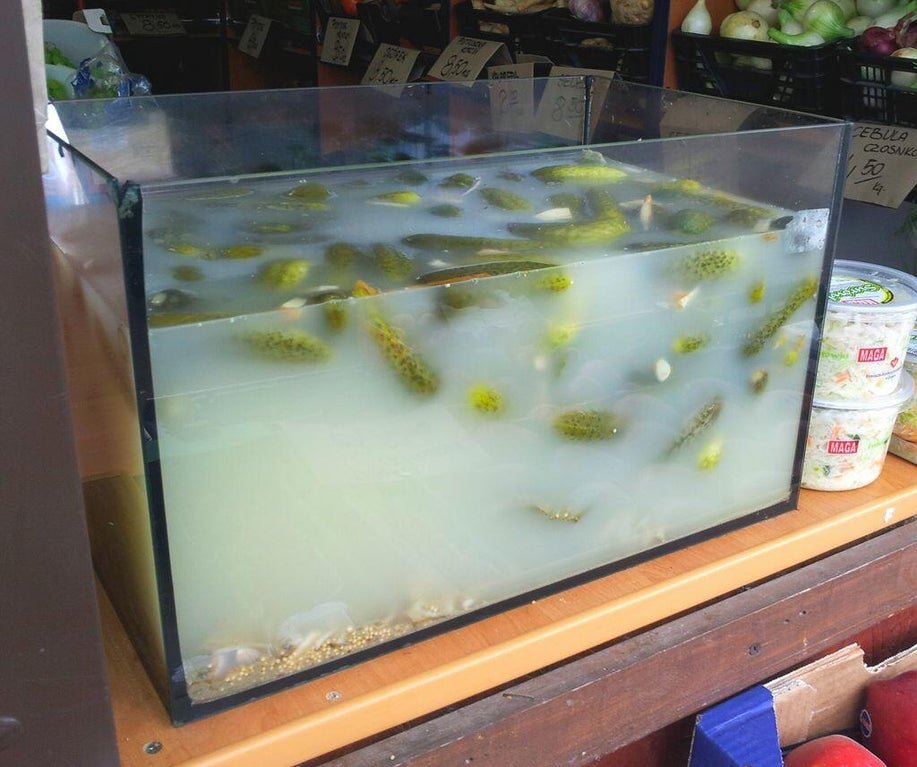 I know my bias against these vegetables makes me a monster, but I'd still much rather bob for apples.

Apparently, the only way that this is unusual for this guy is his choice of attire. 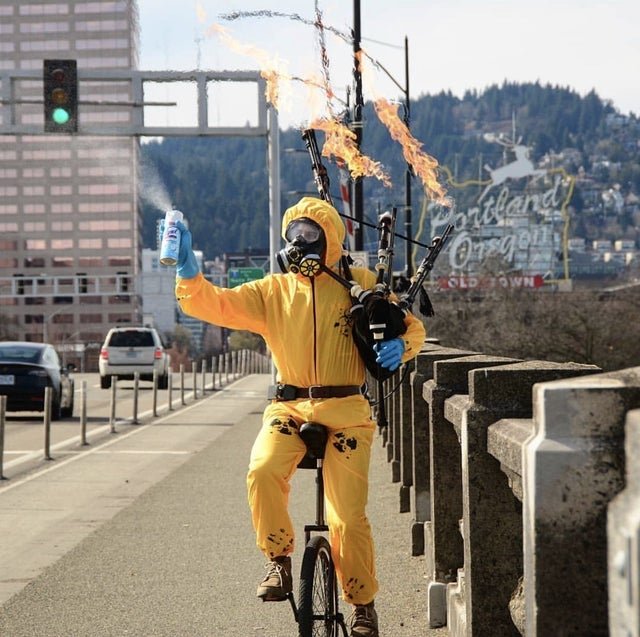 The unicycle and the flaming bagpipes are an established part of his whole deal, but it's apparently more normal for him to wear a Darth Vader outfit.

I guess we can say that he's taking coronavirus seriously. Emphasis on "I guess."

If this was my nightlight as a kid, I probably would've learned to get used to sleeping in the dark a lot earlier. 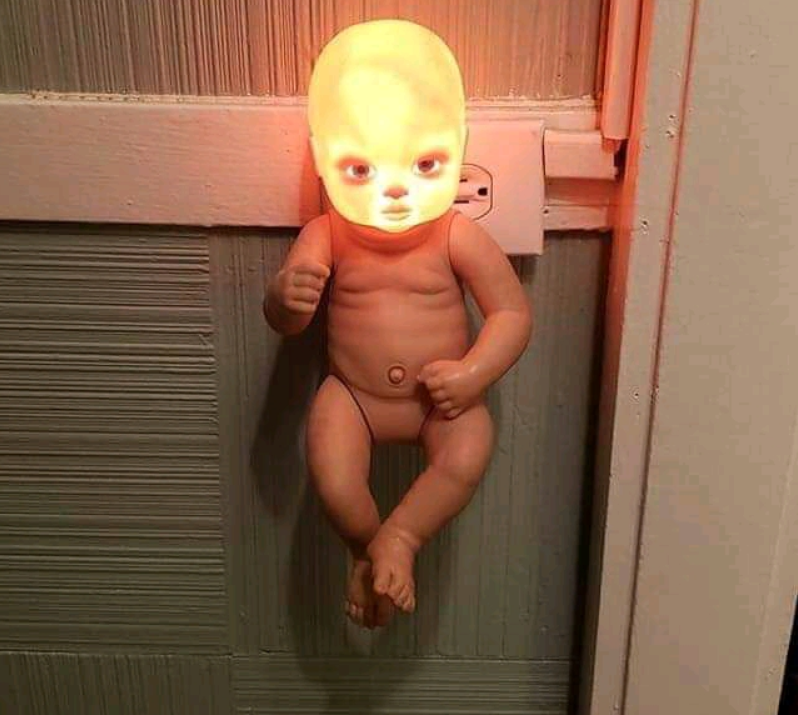 But in a strange way, I guess I can see how it could be kind of comforting. After all, how are the monsters supposed to get you when your choice of decor makes even them uncomfortable?

I'm not just impressed with this guy because he decided to try what he did in a Tony Hawk game in real life. 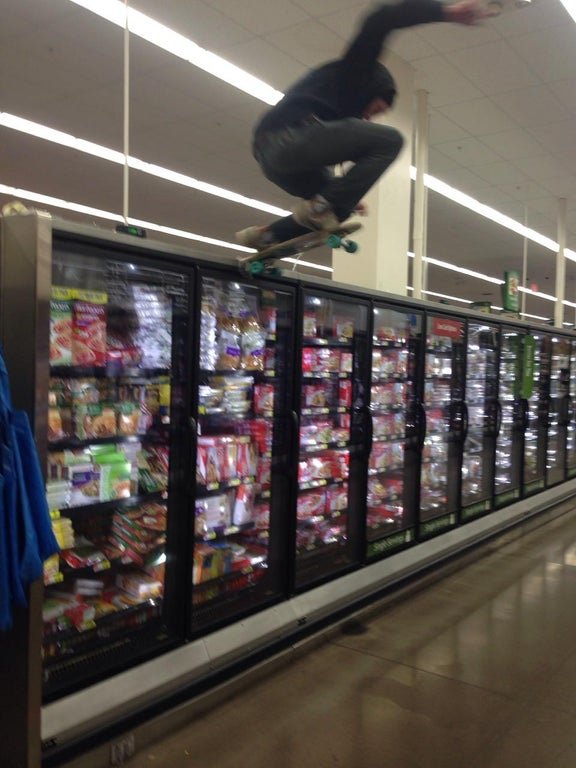 I can recall that lots of kids did that. No, what I'm impressed by is the fact that he made it this far without falling and seriously injuring himself.

I can't wait for that bluntslide on the light fixtures.

I guess enough people posted themselves holding hands with their sweethearts on Instagram for it to be a cliché, so this couple did something different. 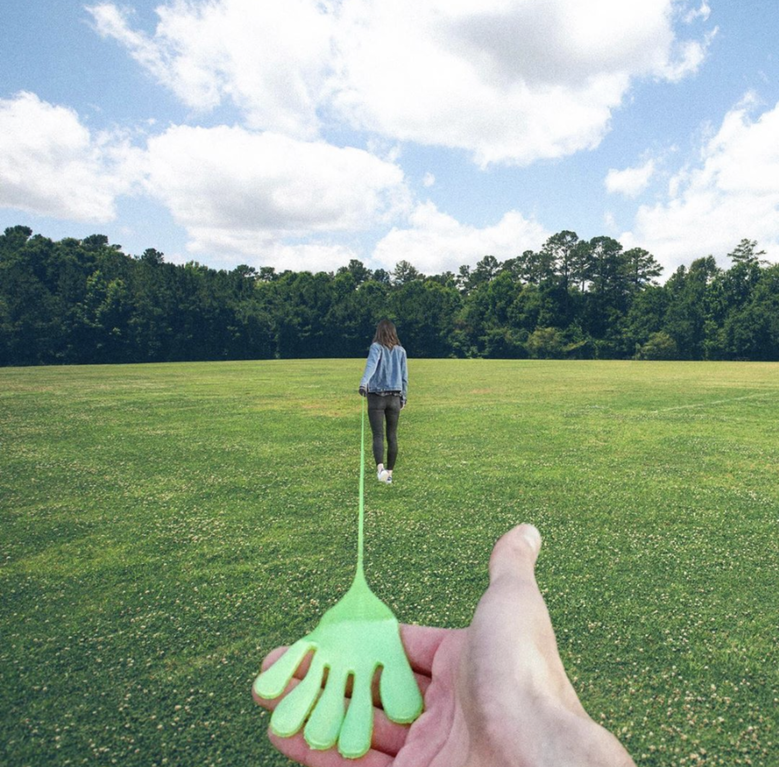 Frankly, I'm just impressed that they were able to get this sticky hand to stretch out that far.

Any version of this I've touched would've snapped and hit me in the face at least five steps ago.

I'm not knocking this person's...unique approach to their Barney outfit, but it doesn't seem very well-received. 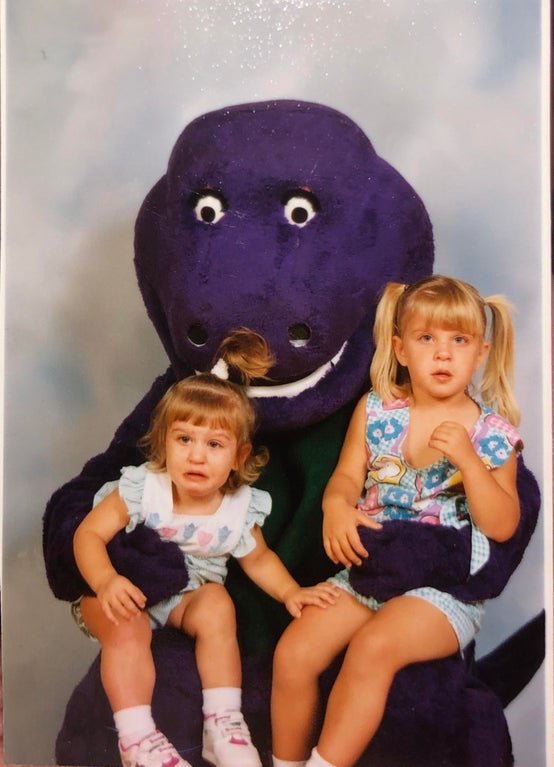 I would definitely call the decision to sing his famous "I love you, you love me" song in a death metal voice a pretty risky move, too.

Honestly, this is a pretty brilliant way to promote your church. 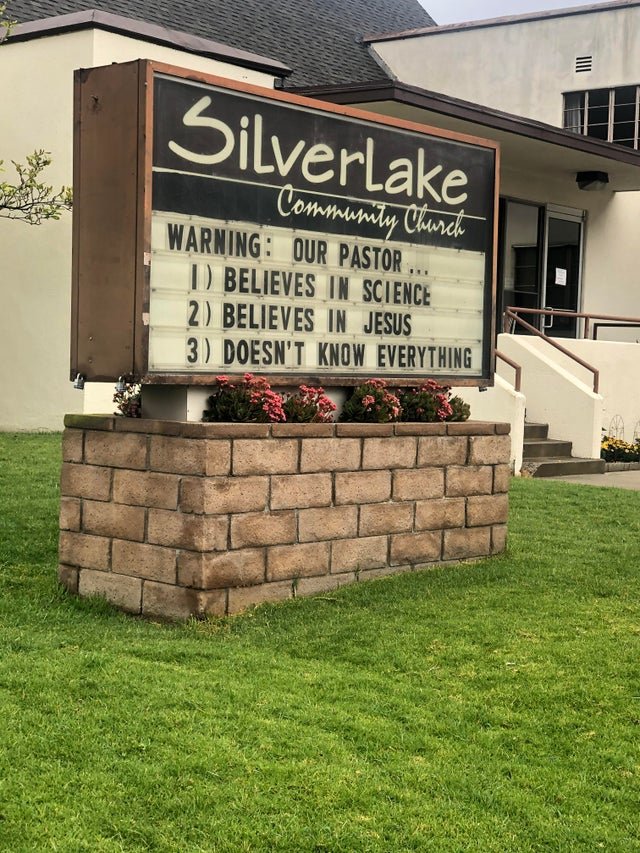 After all, those who might be turned off by this probably had another place picked out a long time ago.

To many others, this would just come as very refreshing news.

When a scary storm was on the horizon, this chicken had more than enough love and comfort to give. 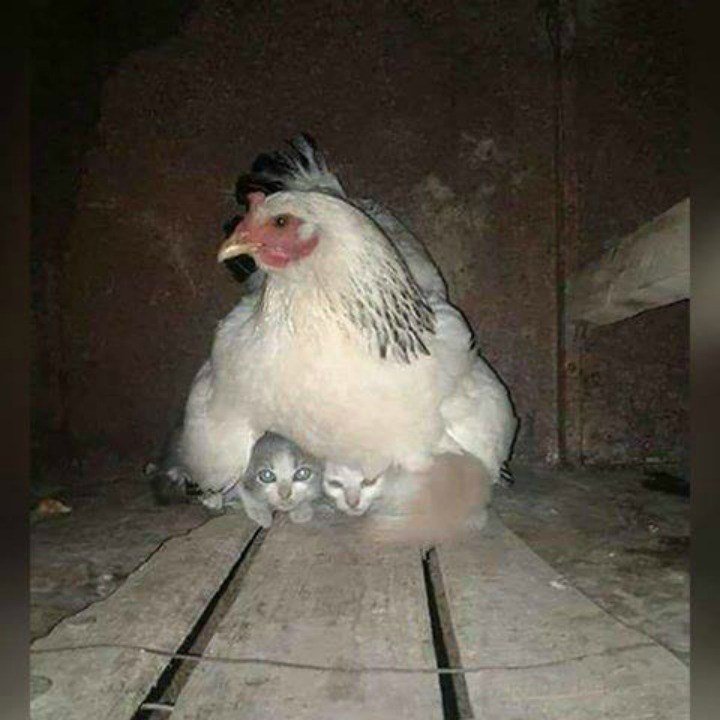 And so, what would otherwise be some terrified kittens can huddle safely under her protective warmth.