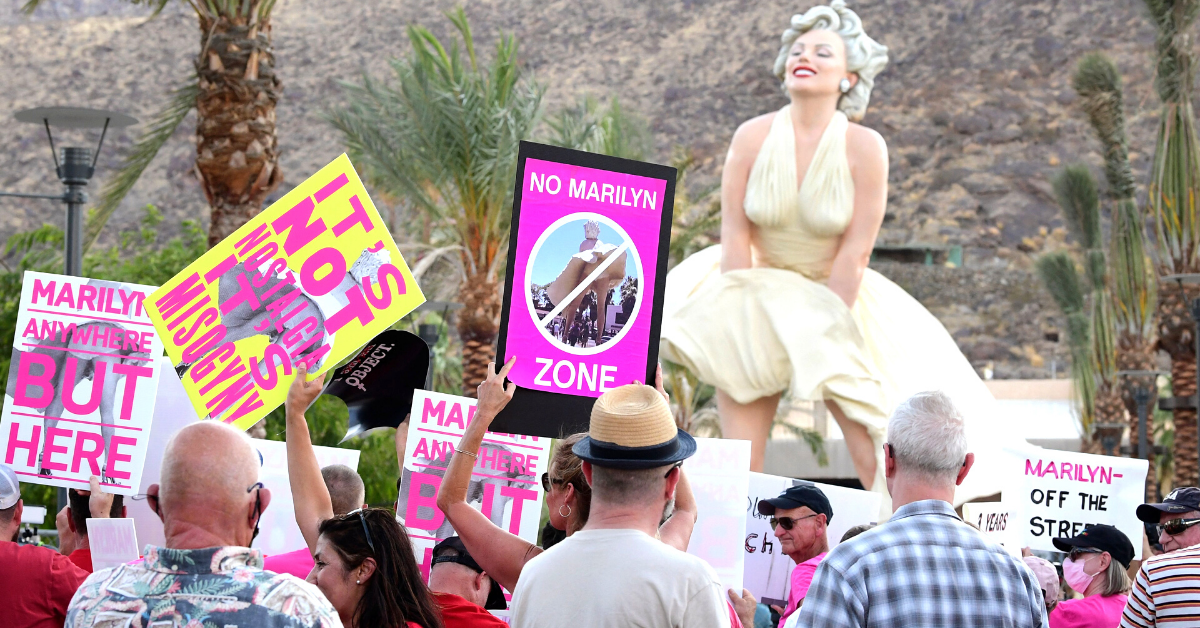 Controversy is erupting in Palm Springs, California after the infamous 26-foot statue of Hollywood legend Marilyn Monroe returned to the city despite backlash from residents earlier this year.

The statue, which recreates one of Marilyn's most iconic on-screen moments, has been called out for its sexism as fans can "upskirt" the statue by standing under it, and now, Palm Springs residents are protesting.

As fans may recall, the "Forever Marilyn" statue by artist Seward Johnson was first in Palm Springs from 2012 to 2014.

When it was announced the statue would return to resort town permanently, it caused controversy from those who didn't feel it's an appropriate homage to a celebrity whose life was plagued by criticism, sexism, and mental health disorders.

The scene from the 1955 classic film has lived on in pop culture history for more than half of a century.

However, this Forever Marilyn statue is not the honorable homage many fans feel she deserves.

Elizabeth Armstrong, the former director of the Palm Springs Art Musuem and a spokesperson for the Change.org petition objecting to Marilyn's objectification, was one of the statue's biggest critics.

"She's literally going to be mooning the museum. It's blatantly sexist," she said last month. "It forces people almost to upskirt."

Now, despite the petition, which reached over 40,000 signatures, the statue returned to Palm Springs on Sunday. However, it didn't receive the warm welcome many city officials were expecting.

The crowd gathered around the statue were chanting "Hey hey! Ho ho! Misogyny has to go!" ... and "Exploitation! Exploitation!"

Emiliana Guereca, executive director of Women's March Foundation, told the* Desert Sun*, "When you exit the museum, the statue is designed to look at her crotch and look at her buttocks and take photos. And that is no longer acceptable."

"It may have been acceptable in the 1950s, but we are in 2021 fighting the same thing and women are saying enough is enough," she concluded, as per TMZ.