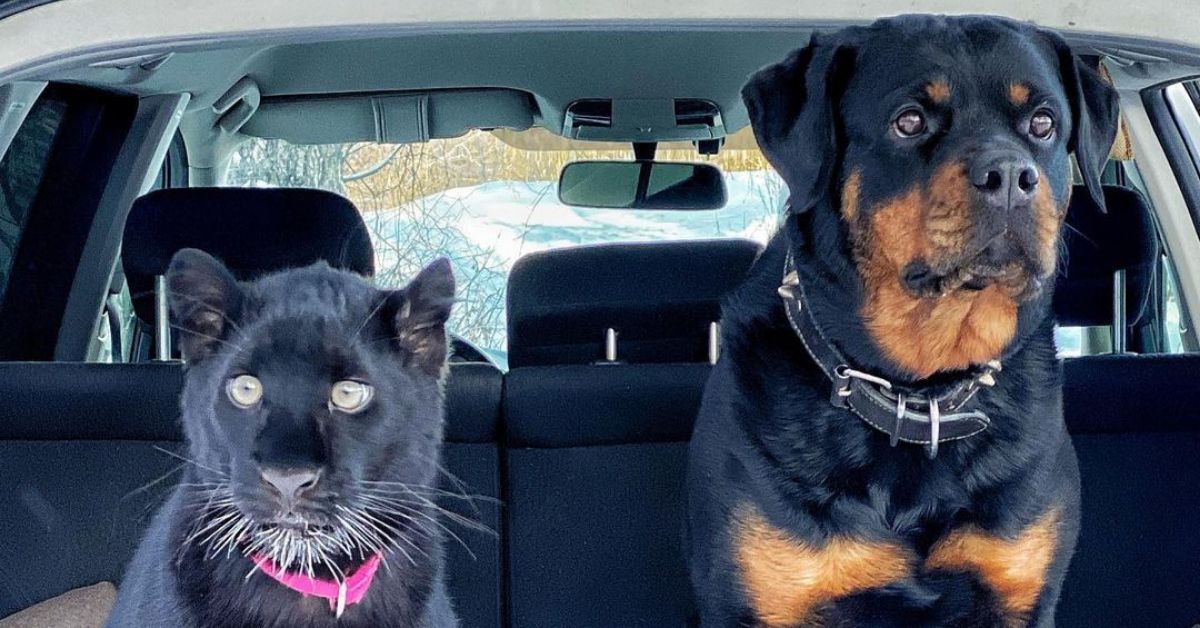 Panther Forms Unlikely Friendship With Rottweiler After Mom Abandons Her

Many people have an idea of what a family is supposed to look like, but the truth is, all families are different and unique in their own way. Sometimes the family that you're born into isn't the family that you end up growing up with.

In this case, an abandoned panther became unlikely friends, and eventually family, to a human woman and her Rottweiler.

It all began back in 2020 when the big cat's momma rejected her.

As Bored Panda reported, a zoo in Siberia welcomed the baby Panther, who they named Luna, but unfortunately her mother was not so welcoming.

For some reason the mother panther dismissed her new baby and would not provide the little one with milk, which meant that without human intervention, Luna would soon be on the brink of death.

One woman came to Luna's rescue.

When all hope seemed to be lost, the unnamed woman stepped in to help. Experienced with looking after big cats, she knew exactly what Luna needed and supplied her with vitamins nutrients that she desperately needed.

Before long, Luna and the woman formed a strong bond and she decided that she could give the baby panther a better life. So, she purchased her from the zoo.

Luna was brought into an unusual yet loving family.

Once home, the baby panther was eventually introduced to the woman's dog, a Rottweiler named Venza. Despite coming from two very different worlds, the two animals became fast friends and eventually formed a sibling bond.

This story has a happy ending because the woman is well versed in caring for panthers and pets that aren't traditionally raised as pets. The average person shouldn't decide to take on such an animal, such as a panther, as a pet if they don't have the skills and the knowledge to do so.

It looks like when Luna needed someone the most, they appeared just in time.

We're are truly touched by the unique family.

After being completely rejected by her mother, it didn't seem like Luna had a chance, but defying all odds, her story had a happy ending. She's grown in a heavy and loved adult panther with the family that decided to nurture her unconditionally.

To see more of Luna and her BFF Venza, make sure to check out her official Instagram page.

Let us know what you think of Luna's story in the comments and if you feel inspired by this rare story.