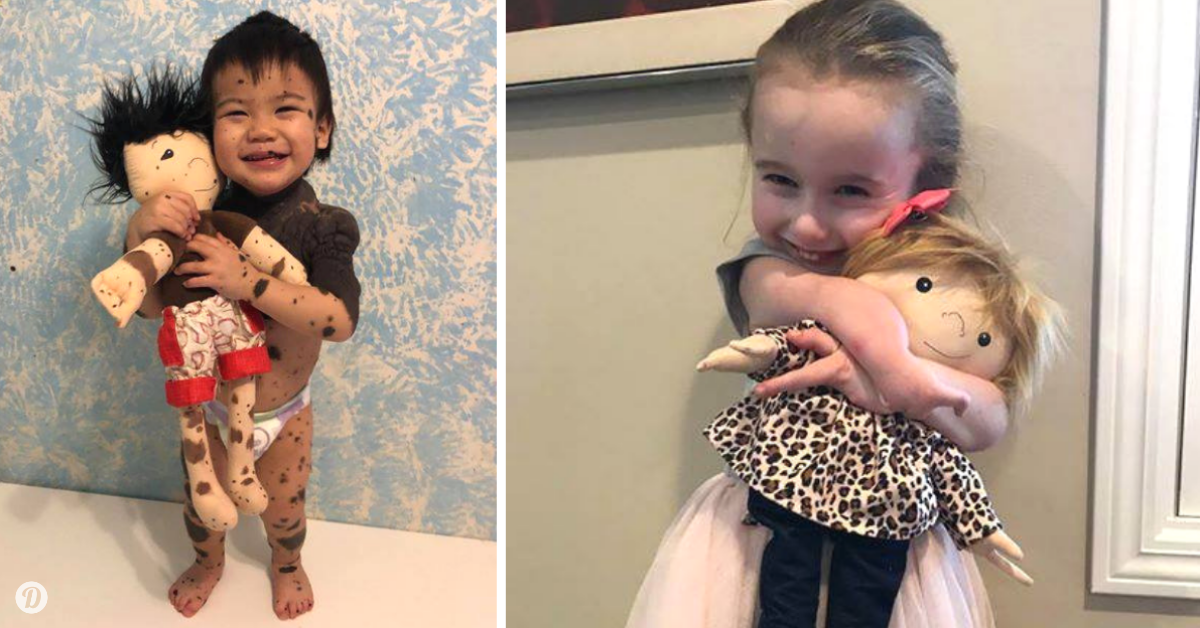 Woman Creates 'A Doll Like Me' For Children Who Have Disabilities

As nice as it is to find a personalized key chain that lines up with your name in a gift shop, those of us with unusual names often don't have that luxury. But ultimately, that's not a big deal. There are other ways to make our luggage stand out, and many of our places are cluttered up enough.

But there's another case where personalizing keepsakes to match their owners seriously matters and one doll-maker is doing her part to make a massive difference.

Before she started making dolls, Amy Jandrisevits was a social worker in a pediatric oncology unit. 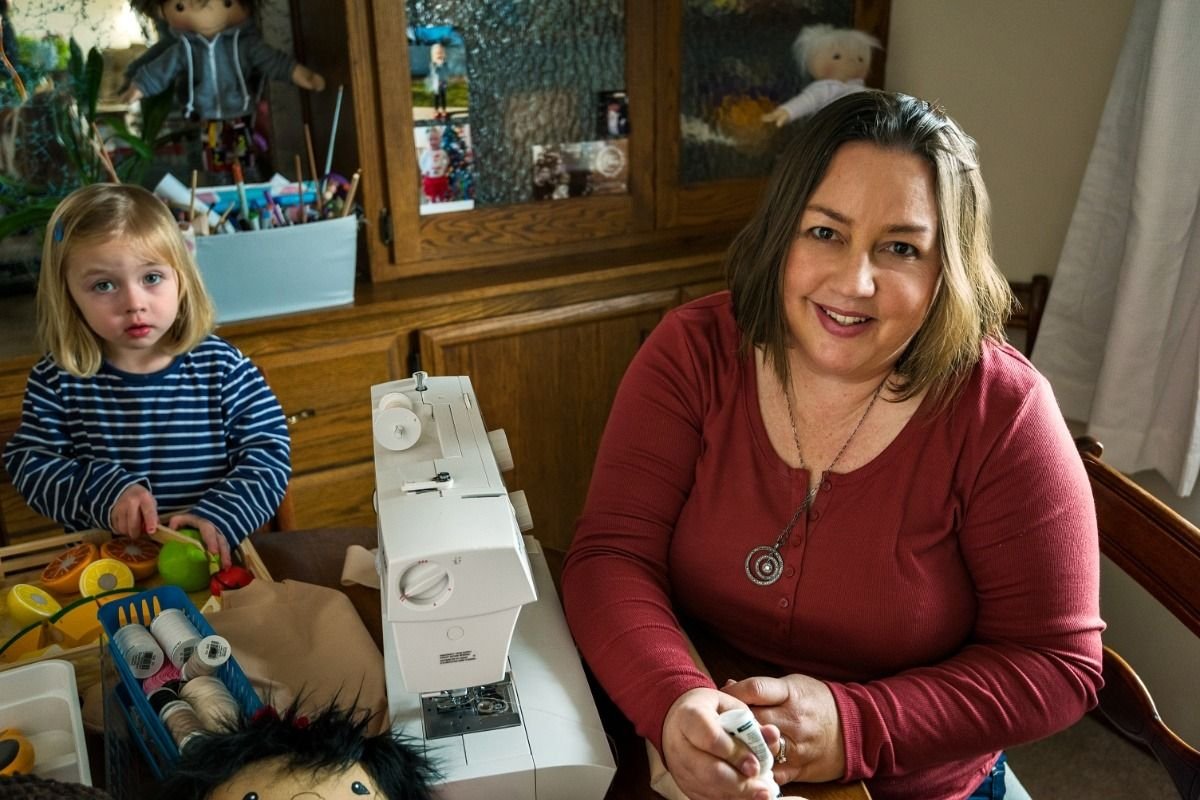 As she said in her GoFundMe campaign, she used to do play therapy with dolls, but she eventually noticed that the dolls she used had thick hair and seemed to be in perfect health.

Unfortunately, that didn't describe the kids she was working with in the cancer unit.

She realized how difficult it is to make a child understand how beautiful they are while also noticing that they won't see themselves in anything that's supposed to look like them. 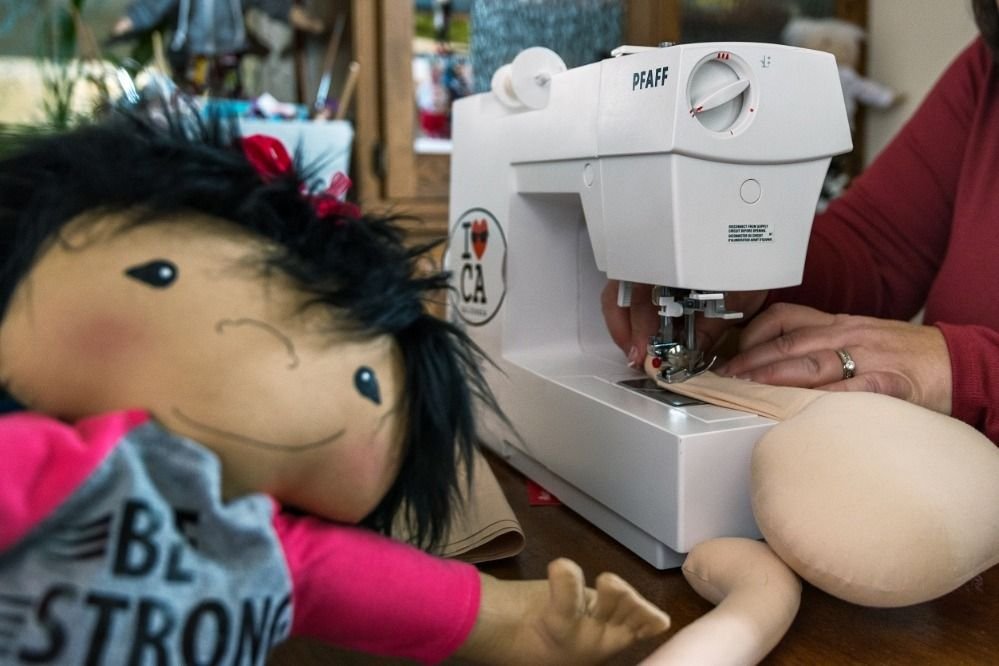 And so, she started making non-traditional Raggedy Ann dolls. When parents started to hear about what she was doing, they started making requests to suit the differences that made their children special.

Four years later, doll-making has become Amy's mission and she does it under the name "A Doll Like Me." 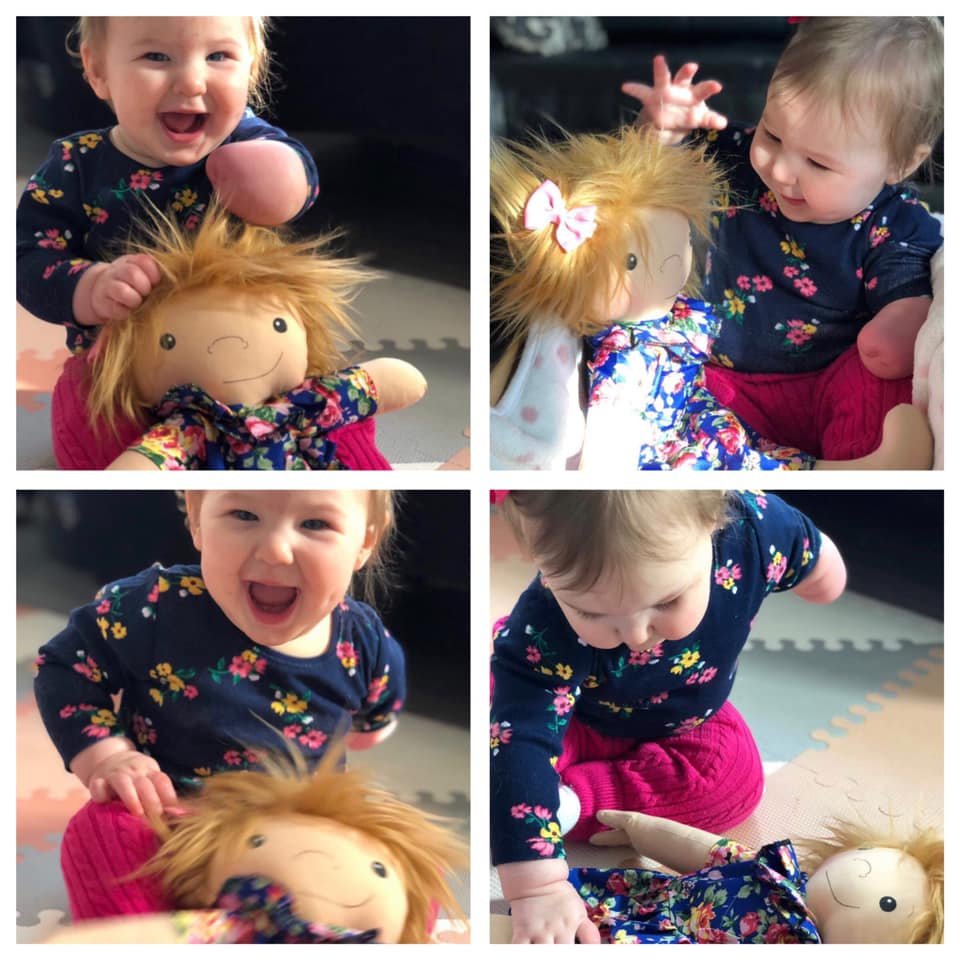 In that time, she's made about 300 dolls and her wait list always seems to have names on it.

Each doll costs about $100 to make, but seeing how excited each child is to finally have a doll that looks like them is priceless.

For that reason, Amy pledges to find a way to cover the cost herself when parents can't afford $100. 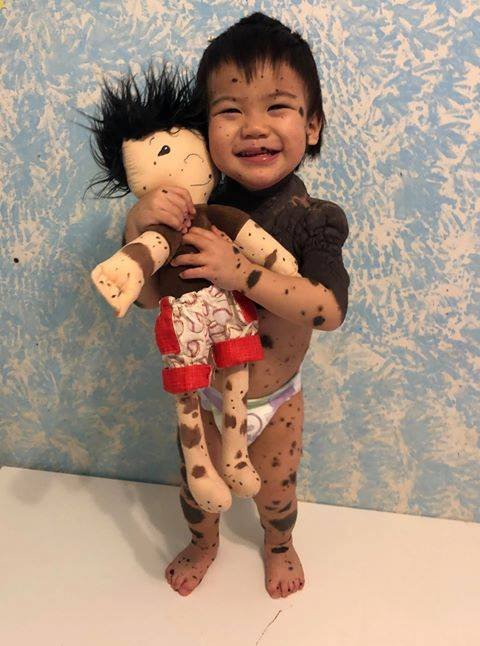 And so, she started the GoFundMe to help make that more feasible.

In addition to paying for the material and shipping costs of the dolls, the funds she collects will turn A Doll Like Me into an official non-profit organization.

At this point, she has already partnered with a children's hospital to identify kids who could benefit from a doll they can truly call their own. 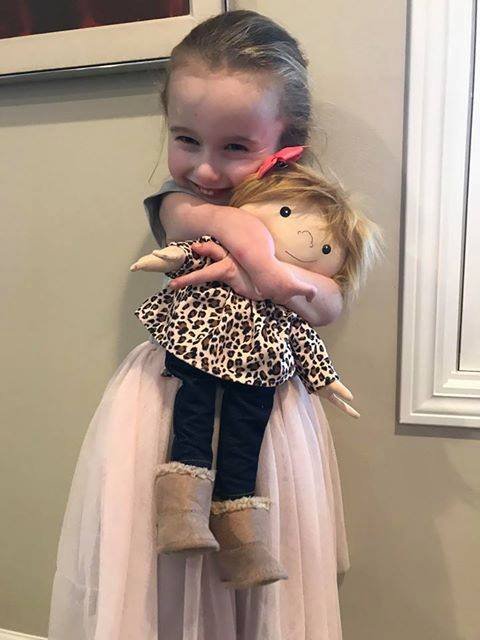 And it seems as though people are really responding to her mission, as she has already raised almost $23,000 of her $25,000 goal.

Her ultimate goal is to do this without needing families to pay for something so essential for their kids' well-being. 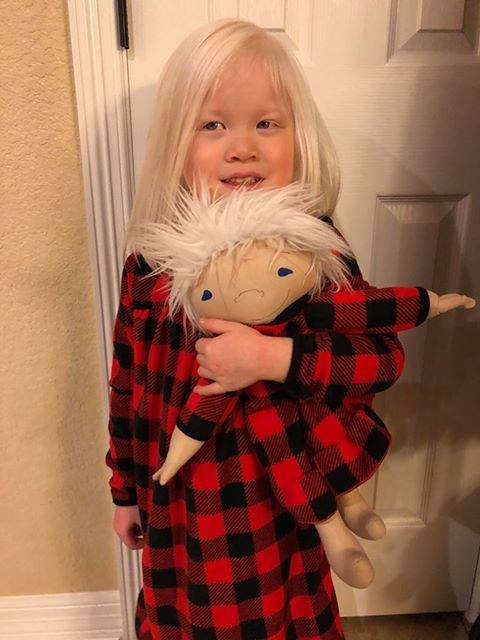 As Amy put it, "If we’re going to look at mental health as a necessary part of medical care, this is key. If you want validation and play therapy, you need these dolls."

In addition to ethnicity, limb difference, body markings, and other health considerations, Amy will also make dolls with the kids' interests in mind. 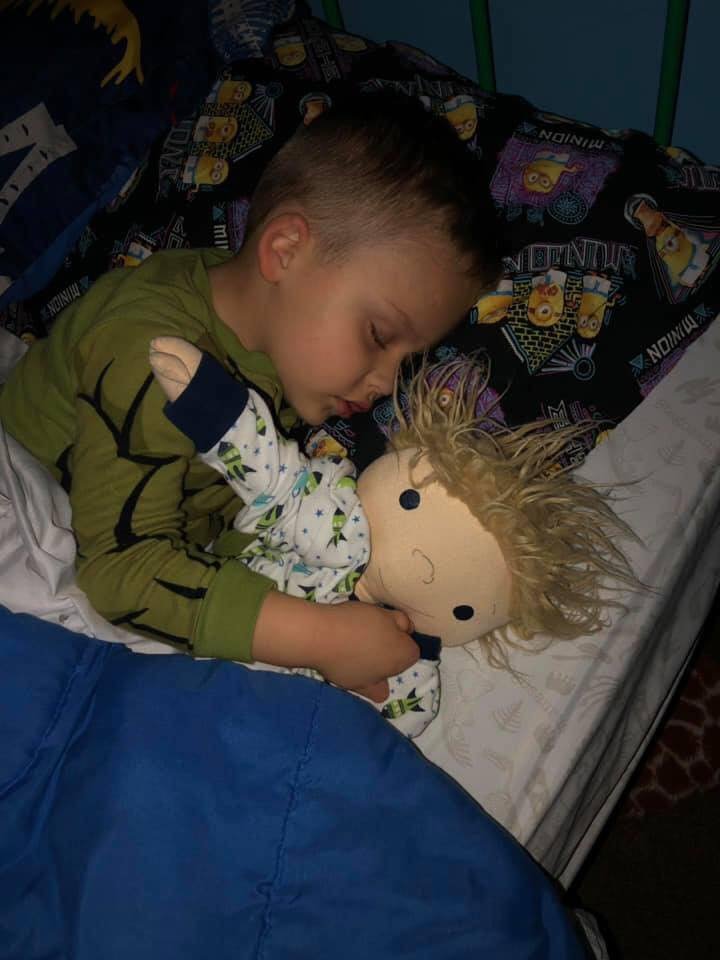 According to Amy's Facebook profile, she found herself learning how to make different types of dolls as she did this. She made dolls with different limbs at first, but then figured out how to incorporate hand differences, albinism, birthmarks and burn scars.

Now, she takes care of all the potential differences she'll run into by saying, "if it's something I can do, I'm willing to try." 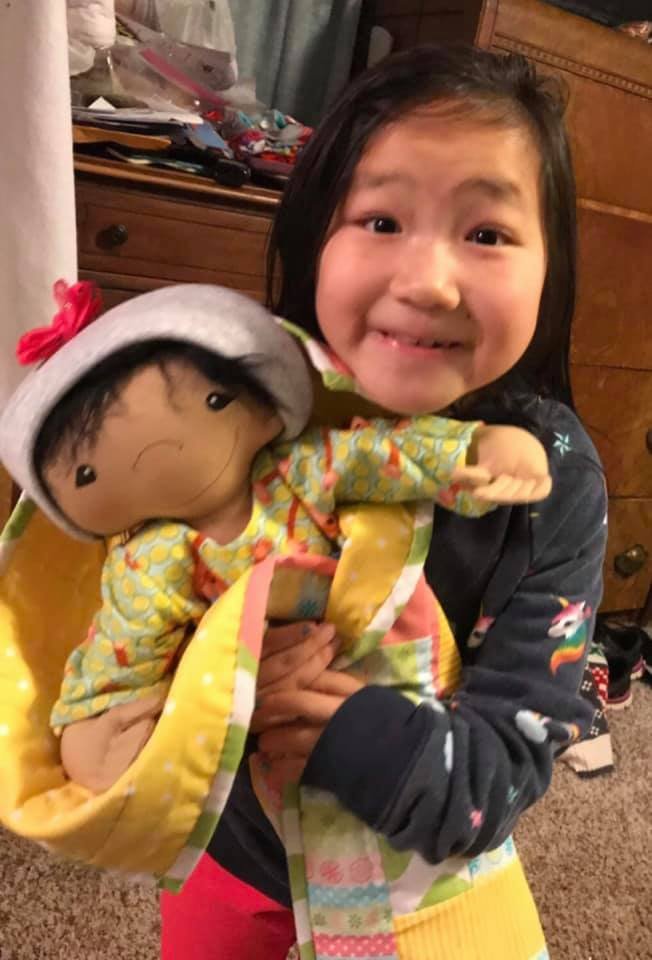 After all, anything is worth witnessing a child look at her creations and say "she's just like me," which is actually how this little girl reacted to her new doll.

To Look through the A Doll Like Me Facebook page is to treat yourself to so many heartwarming first meetings between these little ones and their dolls. 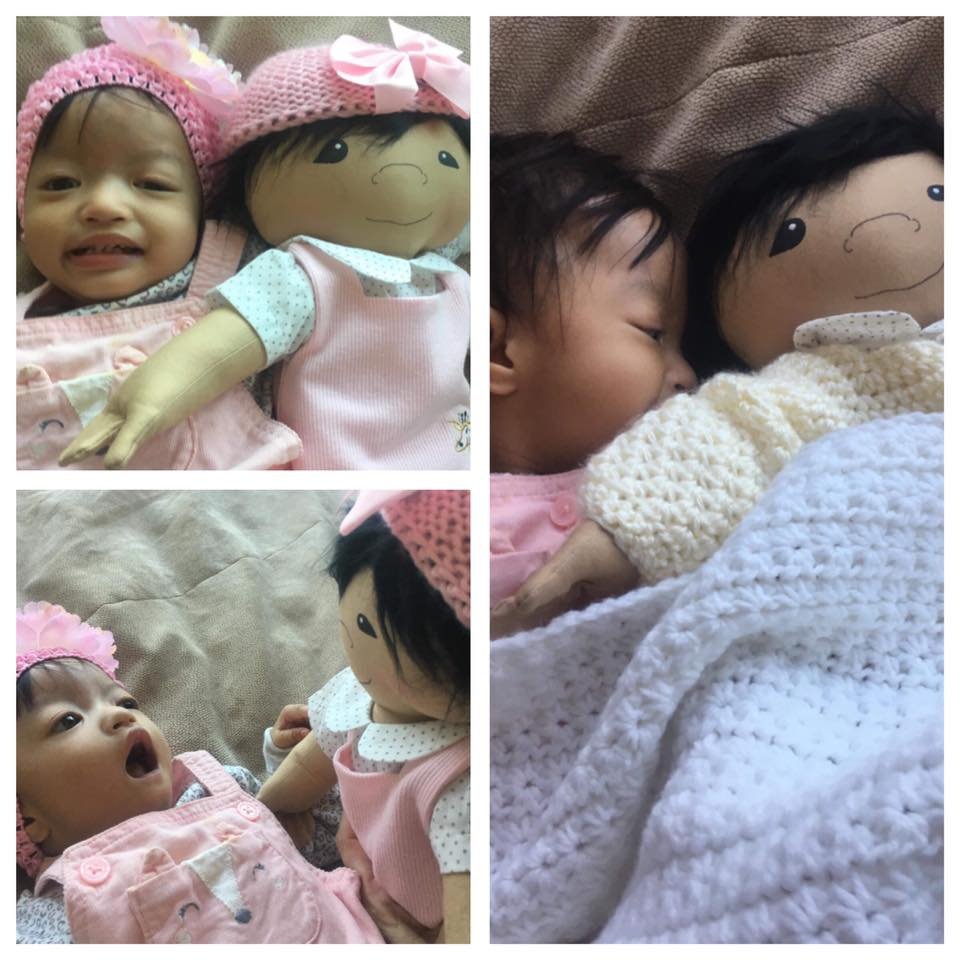 As Amy said in a post, there's a story behind each one of these dolls, but she generally prefers to let the pictures tell it themselves.

But some stories have enough going on behind them that Amy does fill us in. 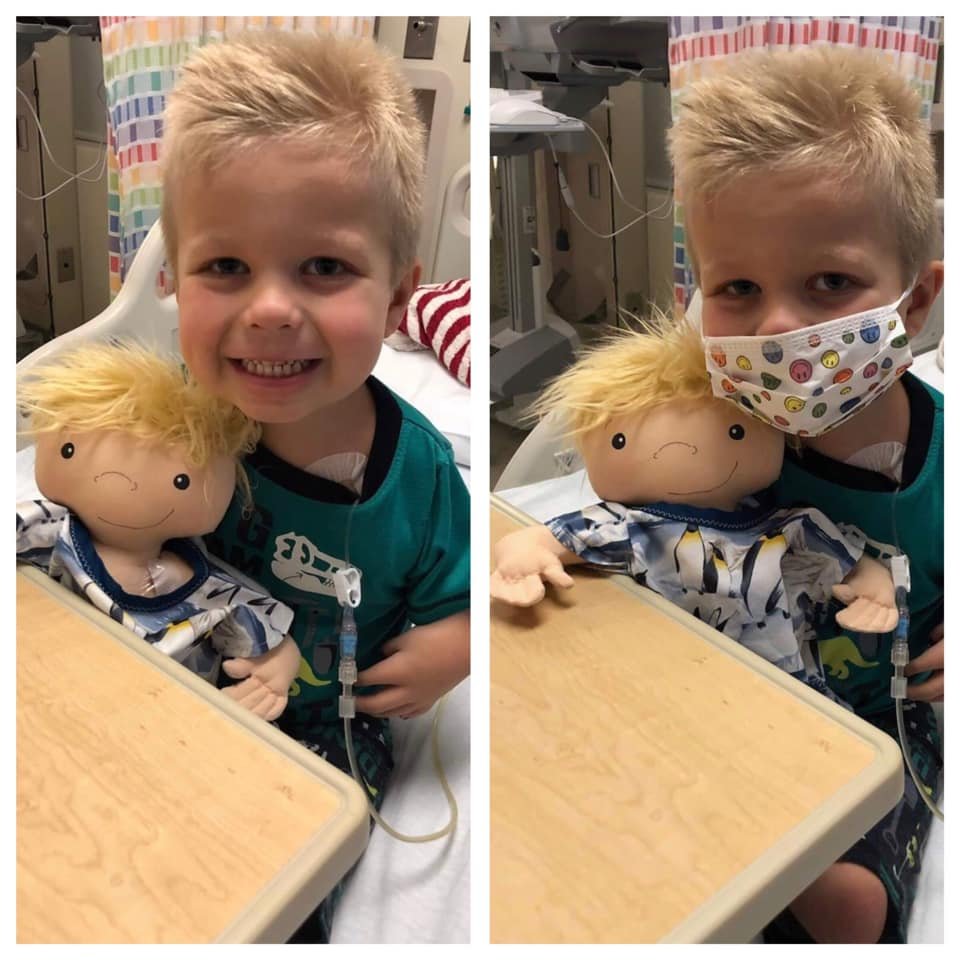 In this case, this boy's dad is a cop, so Amy asked two police officers to let her take some pictures with his doll in their squad car.

Not only did they agree, but they also sent the boy some Green Bay Packer trading cards and a little, toy police dog.

Another thing that's lovely to see is that the parents of these children usually tell everyone about the impact these dolls had in the comments. 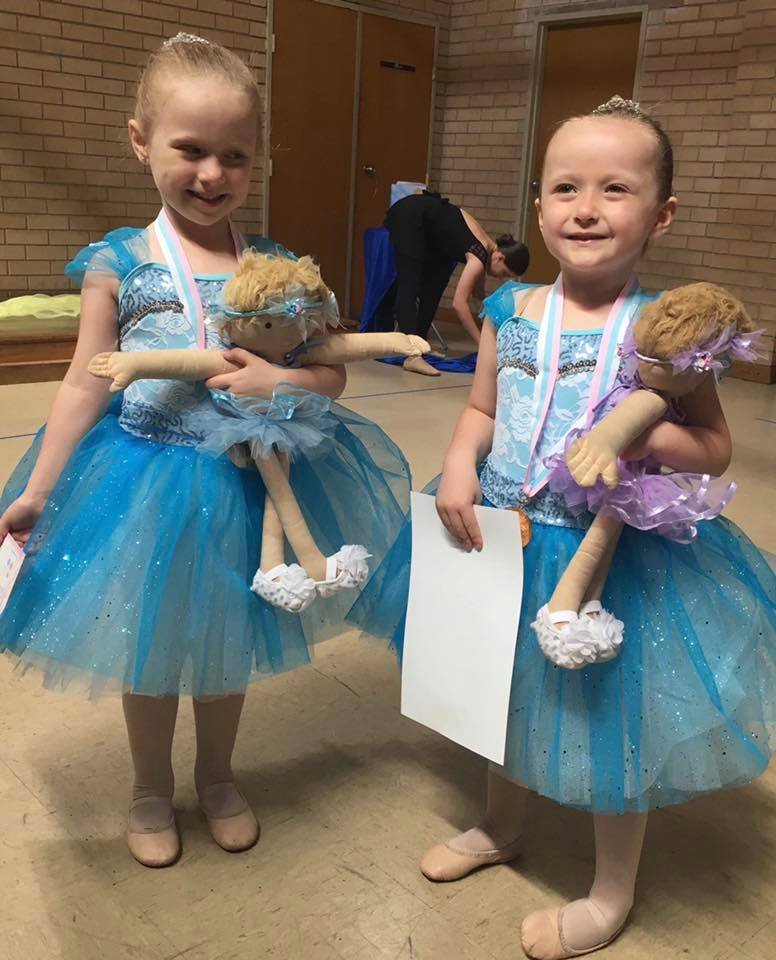 For instance the mother of these two children said, "These dolls are our 3rd and 4th children. There have been times when I have pushed the dolls 'Little Callie and Little Phoebe' in my pram as that’s what the girls have wanted whilst they walk ."

This one really gives us a sense of Amy's attention to detail. 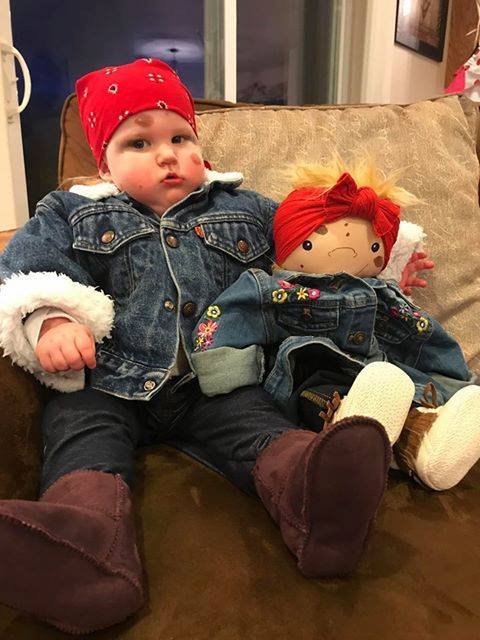 From the outfit to the body shape to ensuring that the doll's little marks are in the same place as its owner's, she was definitely not kidding around when she chose the name "A Doll like Me."

Clearly, GoFundMe was also impressed by what she's doing because they named her their Hero of December. 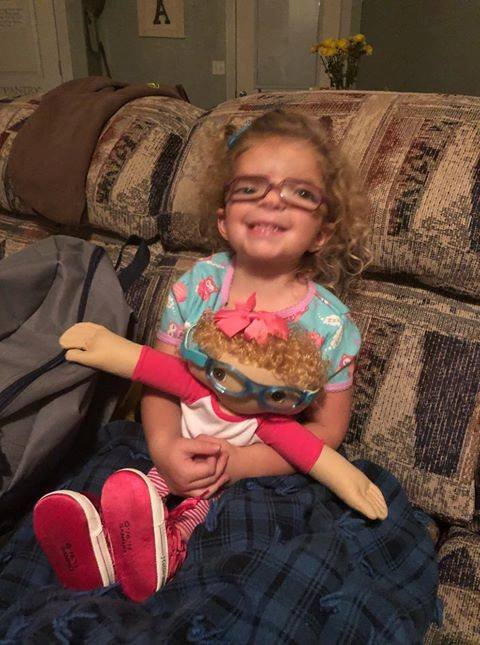 As she said in a post announcing this, "It is an honor to be recognized for what is my labor of love AND it is awesome that other people believe in the power of representation."

This doll made it all the way to Venezuela to meet this little boy! 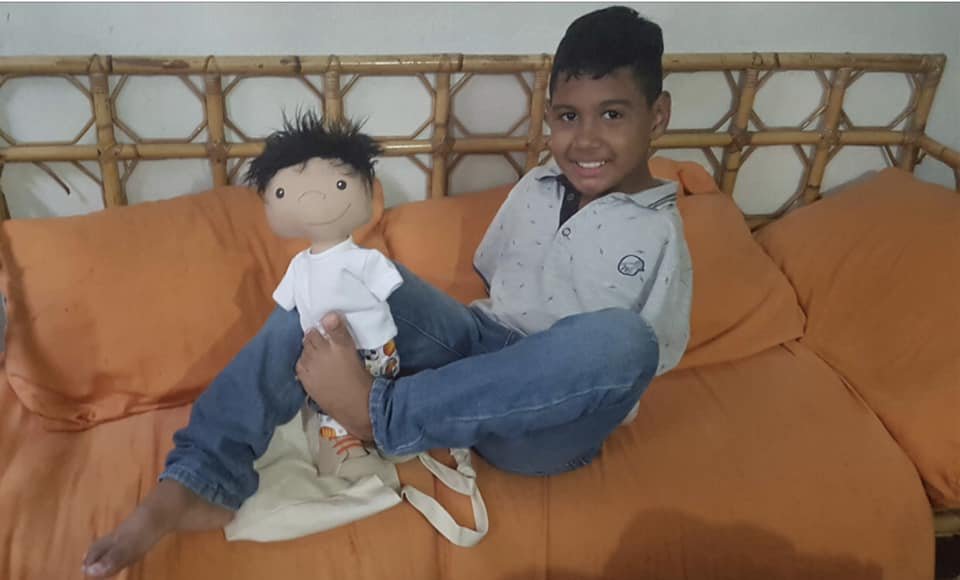 "Representation matters regardless of age, gender, and location. A kind angel made this delivery possible," wrote Amy.

How adorable is this picture of a little girl comparing herself to the doll and realizing they are the same? 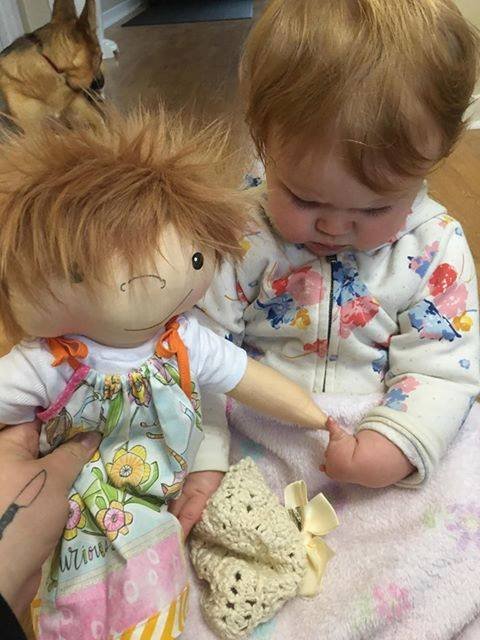 I love how close Amy can get the hair colors to match for these children. So cool!

This picture really hits it home for me. The way she is embracing this doll because she realizes it's just like her is heartwarming to say the least. 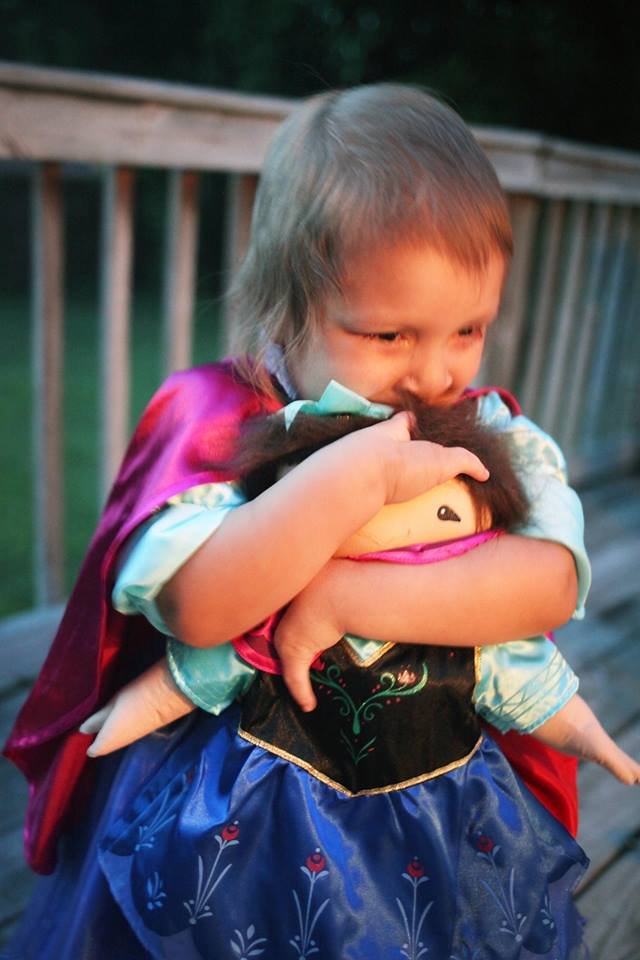 "Isn't this just the cutest? Big Anna and Little Anna from Frozen

Look at this little guy having the time of his life with his doll. 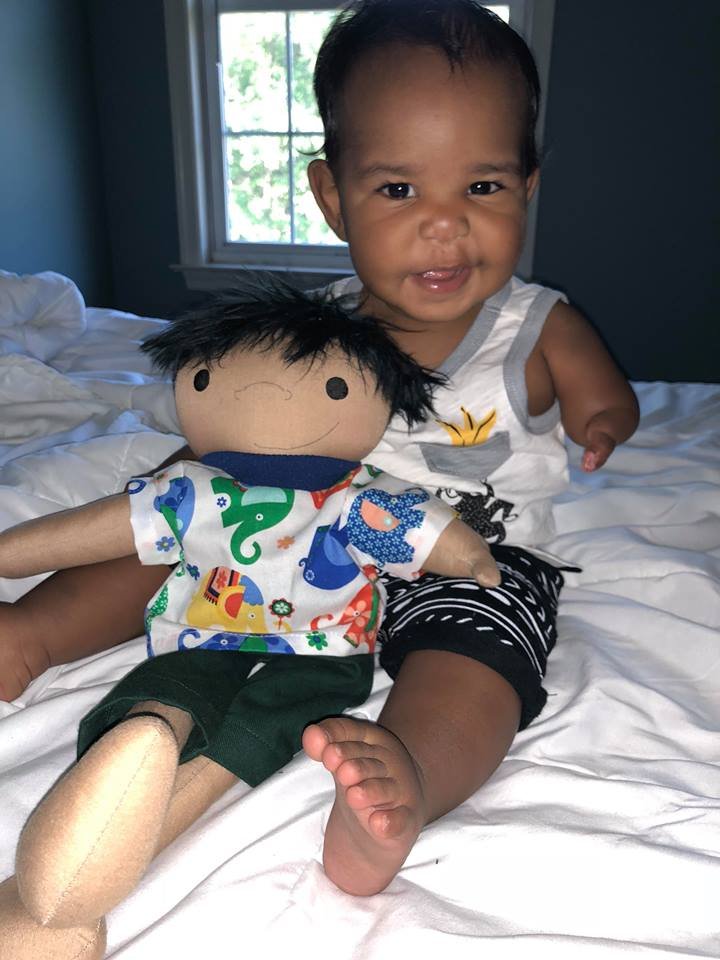 She also took a moment to reaffirm how important these dolls are to the ones who receive them. 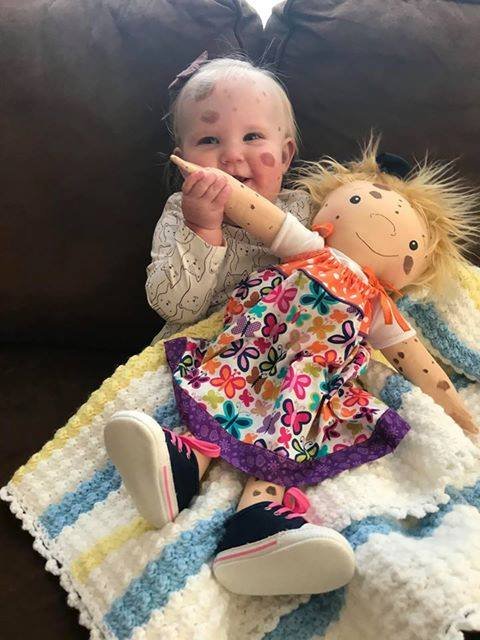 She went on to say, "On the one side, dolls are validating for the little people they reflect. And on the other side, dolls are a tangible way to share kindness and demonstrate acceptance. These children are perfect just the way they are!"

Amy Jandrisevits is doing amazing work and is most definitely a hero for these children.