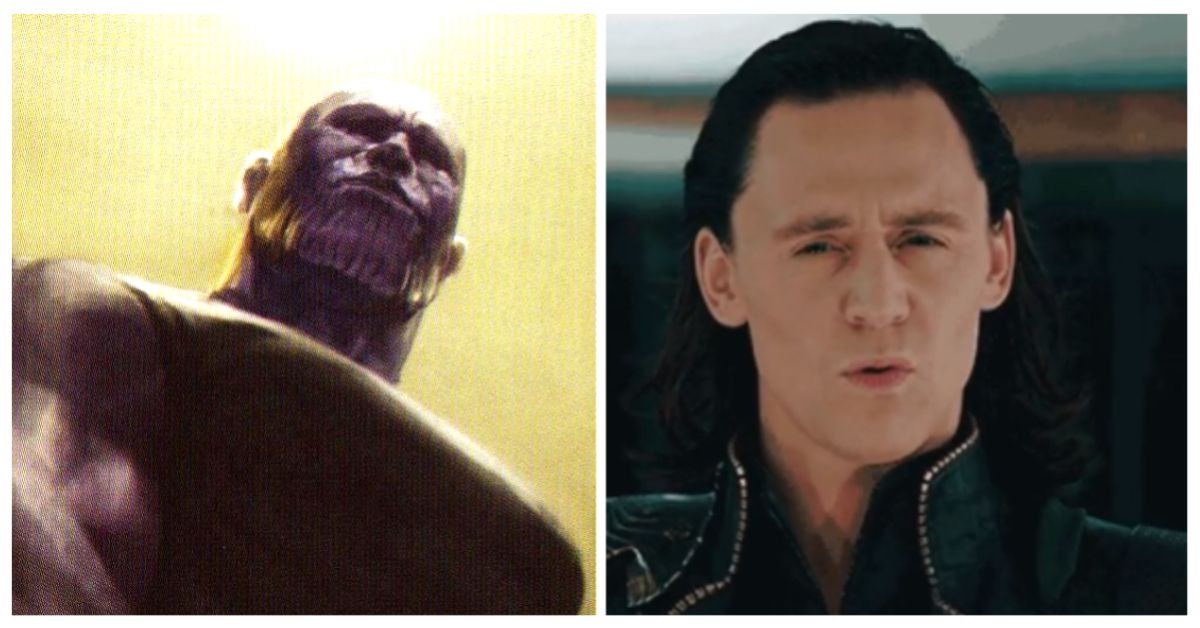 We Almost Got A Shirtless Thanos In 'Infinity War'

It's pretty fair to say that Thanos was the standout star of Avengers: Infinity War. Fans were drawn to a villain that was more complex and nuanced than a lot of the previous Marvel antagonists (don't worry, Killmonger, we see you and we appreciate you.)

But it's also pretty fair to say that fans were drawn to Thanos because, well...because they just dig him.

There's no denying that Thanos has stirred up a lot of feelings on the internet. I don't think we should get more specific than the word "feelings," but I think you get it.

Maybe it's how gentle Thanos was with little Gamora. Maybe it's his Fortnite dance skills. 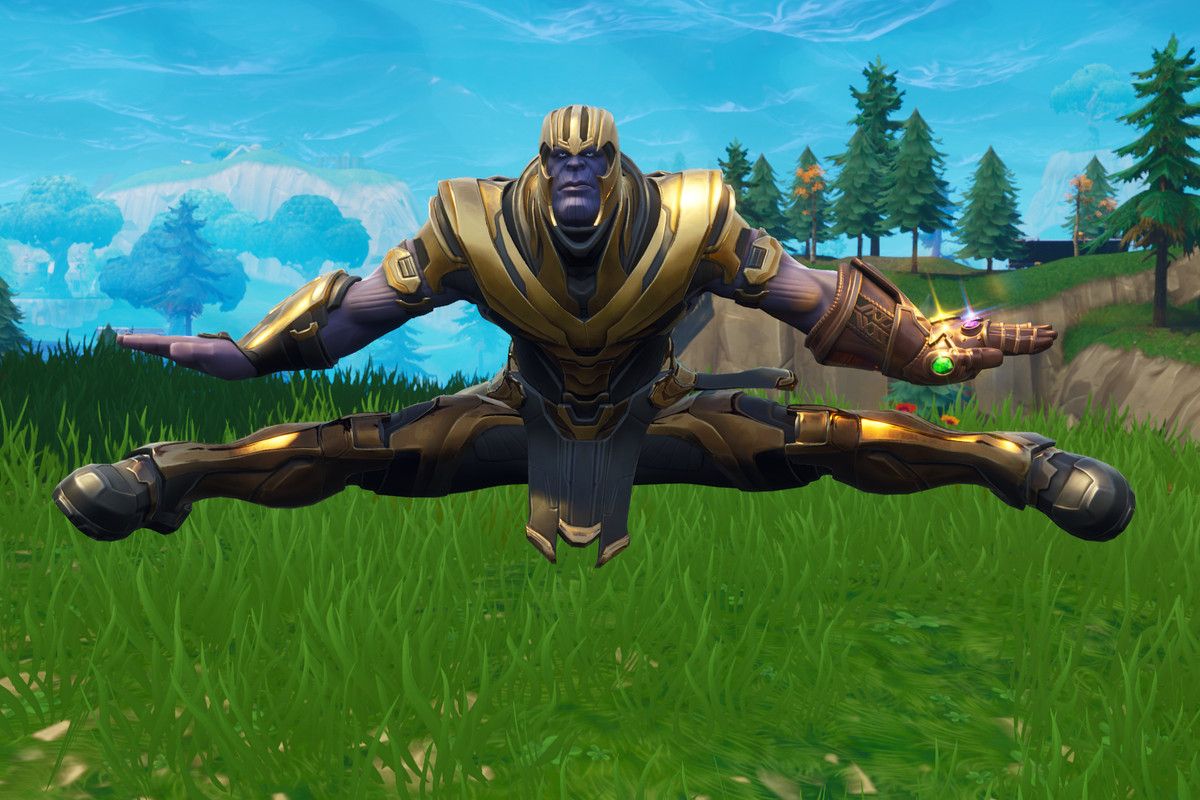 And I mean, there's really no arguing with moves of this caliber.

Maybe Disney has just latched onto what makes millennials tick, even subconsciously. 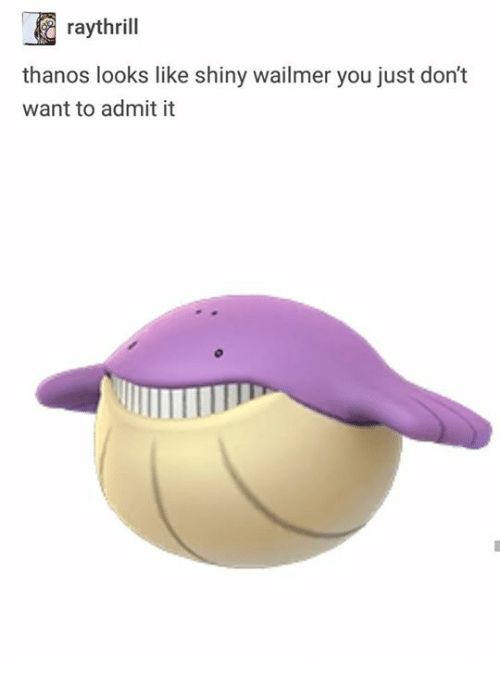 Not cool, Disney. Pokémon are sacred, and you can't just go messing around with my emotions like that.

So it should come as no surprise that when alternate character designs for Big Purple showed up, everybody would lose it.

And we were here for it. In a big way.

I mean, there's definitely been alternate Thanos designs for ages...like the original one from the comics, for example.

Somehow I don't think this one has the same raw appeal as Josh Brolin's version, though.

Some of the designs are better than others. 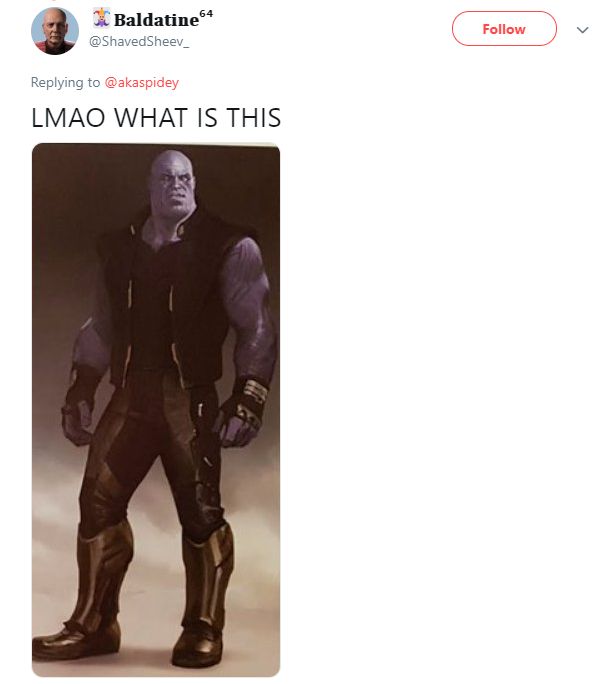 Oh, I'm not saying this is one of the better designs. Although I am really looking forward to Thanos releasing his new K-pop album next year.

If they'd put Thanos in that weird biker outfit, he would've been arrested by the fashion police in the first scene. 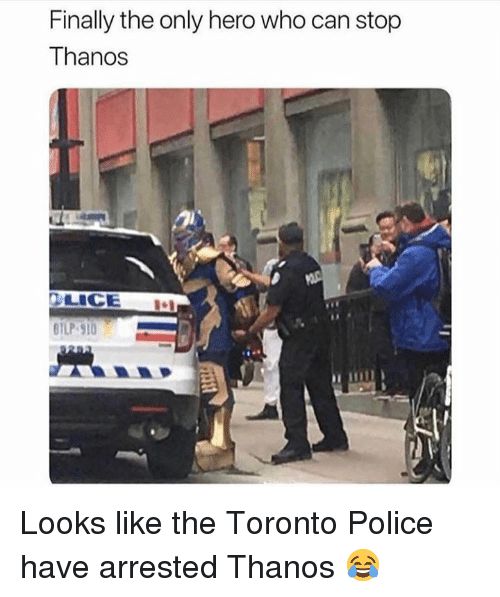 Do you think Marvel settled on "Dad Thanos" after testing a bunch of other varieties of evil overlord? 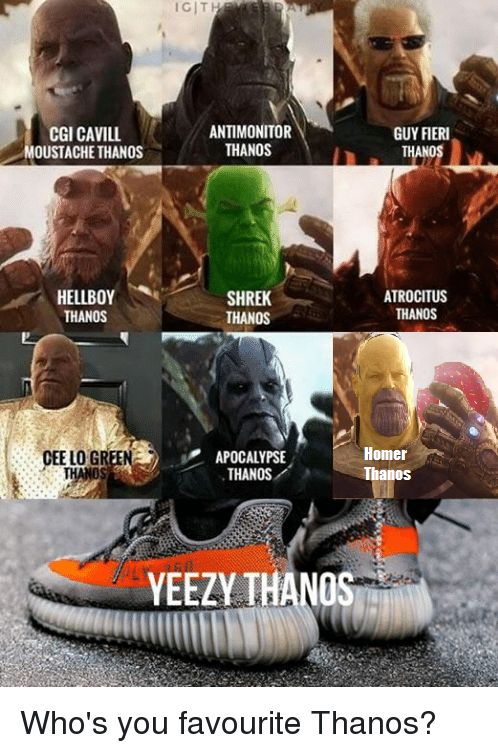 Fun Fact: Yeezy Thanos used the least CGI but was still the most expensive option.

But hey, there's a fetish for everybody.

I guess the odds demand that somebody would be into this Thanos.

But I guess nobody can be blamed for looking past a bad outfit to the person underneath.

The purple, mass murdering psychopath underneath.

Hey, Twitter, what's up? Do you need to talk?

There are a lot of different takes on Thanos, apparently.

It always blows my mind how much development goes into this stuff.

And as usual, there's a fan on Twitter who's hungry for whatever Thanos is cooking.

I guess it was inevitable. You know how it goes — Thanos fan-os for life, y'all.

I actually have to agree with that last one. I'm slowly getting on board with this.

For real though, that "Thanos in a kimono-thing" look is...well, it's a look.

But to keep it even realer...nothing holds a candle to the glory that is Topless Thanos. 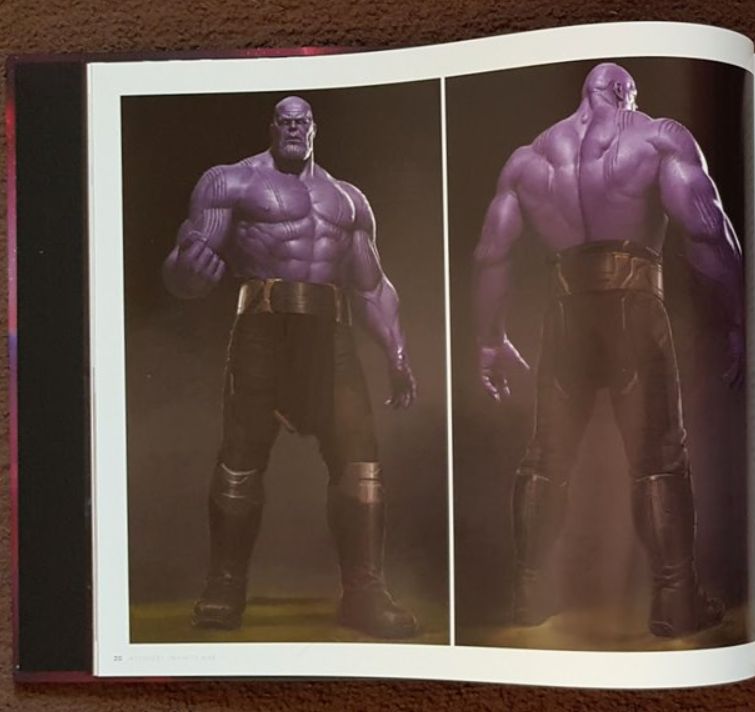 And as if on cue, Twitter lost their minds over it.

I'm not saying they were wrong to do so, either. Whew.

Now, Twitter has had fantasies of shirtless Thanos long before this concept art made the rounds on social media. 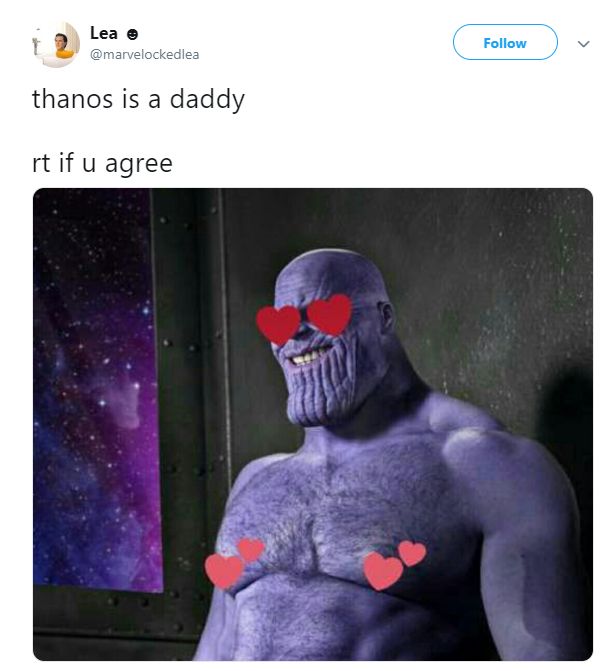 I'm not saying it's always been the healthiest fixation, but it's not new.

It's pretty clear that a lot of Thanos' appeal is that dad vibe. 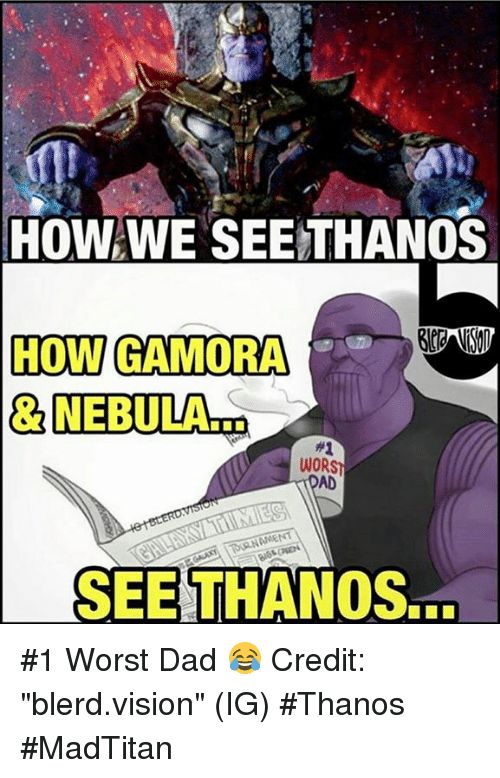 Just think of the dad jokes that are possible when you can bend reality with an Infinity Stone.

Some people instantly recognized the situation and called it out.

Yeah, this dude knows which way the wind is blowing. And it's blowing strong, let me tell you.

And of course, yes, there was a storm coming.

And it's made of hurricane force hormone winds. Thanos has turned Twitter into the Tornado Alley of thirsty Marvel fans.

I have to say, I'm starting to feel Thanos fever myself. What's going on?

Maybe I'm just getting swept up in all the excitement. Maybe the desire was there all along. Maybe it's Maybelline.

Sometimes I wish I could watch every alternate version of this movie. Some look better than others. 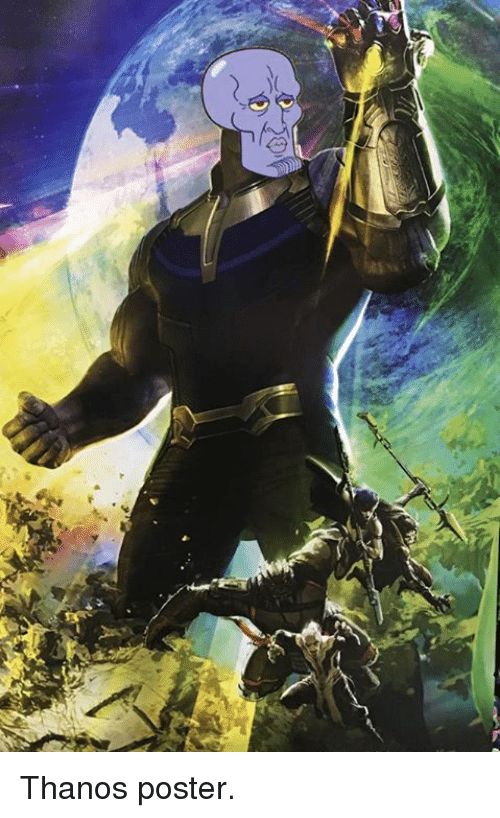 Maybe having two Squidwards in the movie would've been confusing.

Frankly, there are versions that would've been too much awesomeness for one movie. 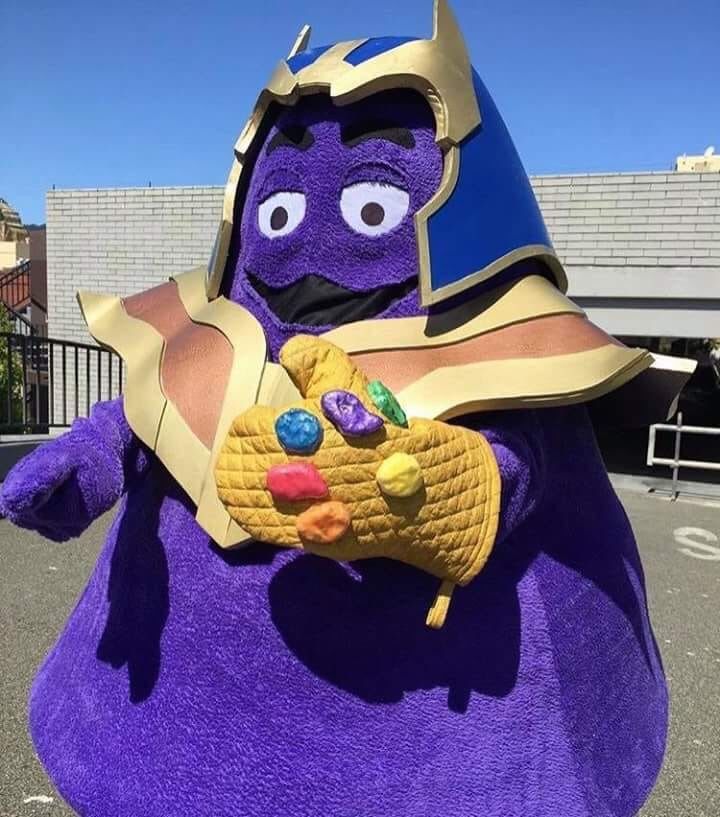 But since there's a part two anyway, maybe the world just wasn't ready for Grimace and the Infinity Nuggets.

There's no easy way to say this, but...I'm ordering food to the office right now.

You know what I hope? I hope they integrate Topless Thanos into Avengers 4. Like, everybody's hot for Thanos.

Because honestly, who wouldn't watch the scene where Big Purple is giving an evil speech and someone yells this out in the background?

I guess with this much attention on Thanos, some MCU characters will always be second cutest.

It's OK, dude. We still believe in you.

Besides, even Thanos had to glow up significantly before he reached daddy status. 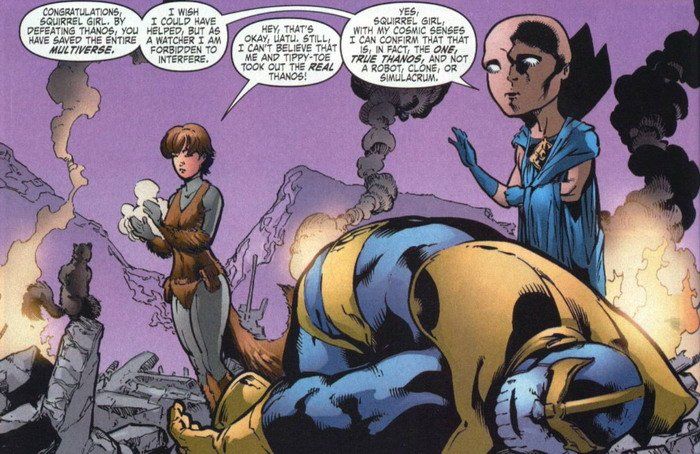 It wasn't so long ago that the evil overlord was getting embarrassed in comic books. Imagine having to tell all of the other cosmic horrors that you just got bodied by Squirrel Girl.

He has to own it, too. There was a witness.

Worse yet, Squirrel Girl was not shy about telling others what went down that day. 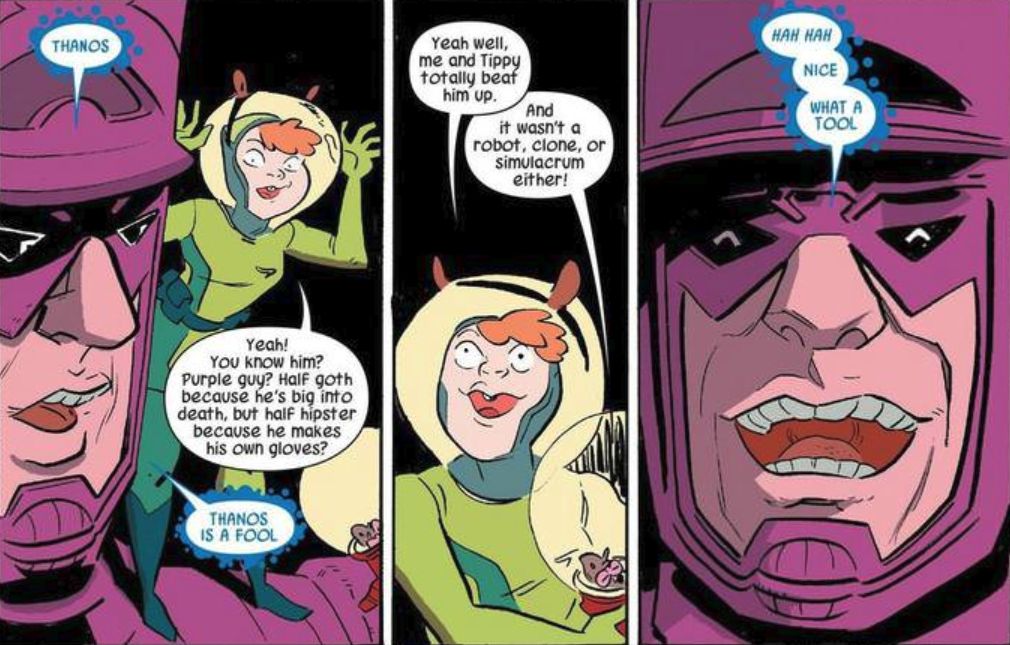 If Avengers 4 features Galactus meeting Thanos and immediately laughing hysterically, we won't have to guess what he's thinking about.

If it's any consolation, Twitter is probably gonna drag that purple helmet all day.

And it's not like everyone was drooling over him when he was chucking bubbles at people in video games. 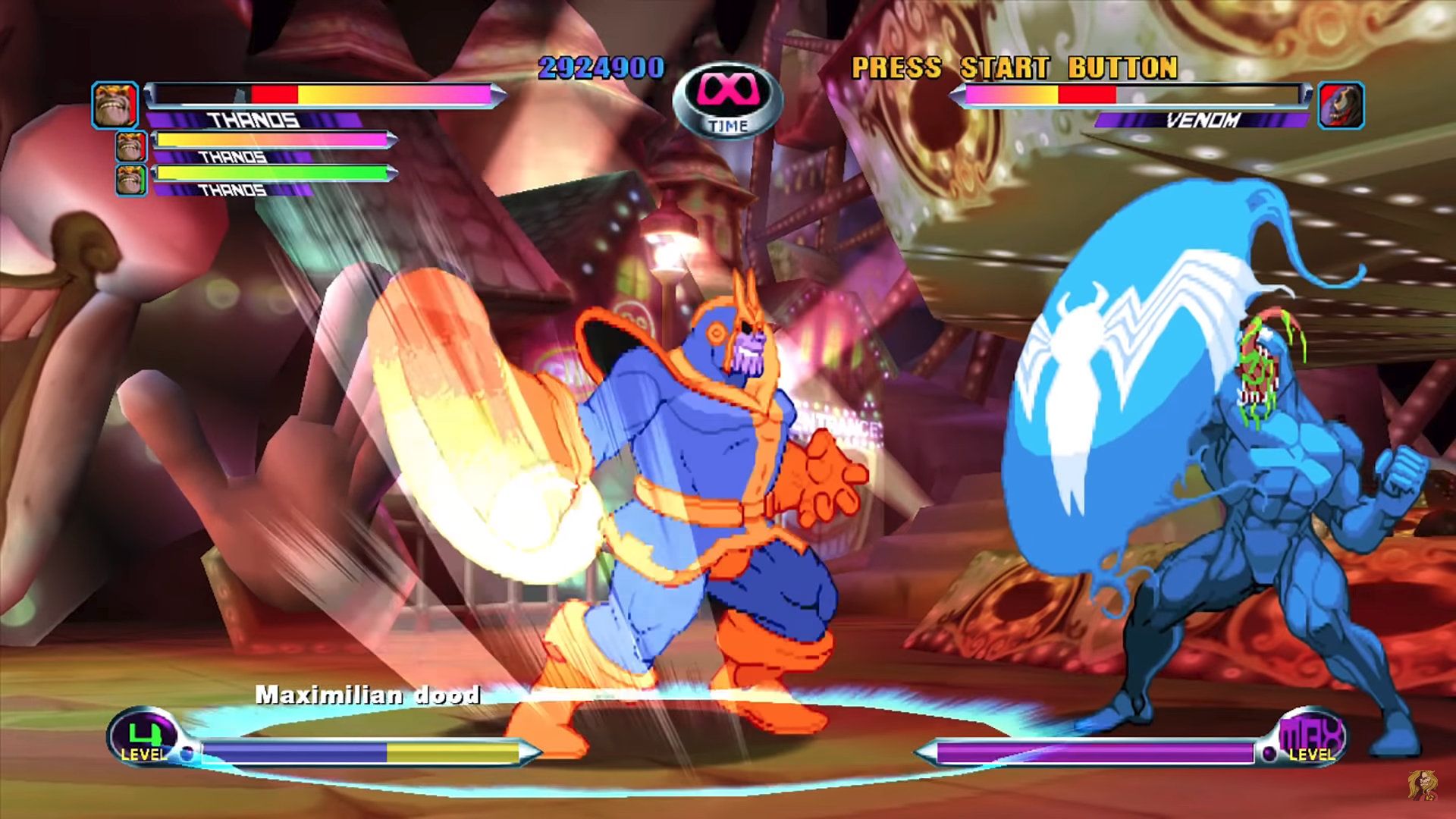 And no, the anger spit that forms when we lost to him for the 100th time doesn't count. We were calling him a lot of things, but "daddy" wasn't one of them.

But people finally realized how hard he serves looks once he hit theaters, right?

Actually, not really. When Guardians of the Galaxy came out, Star-Lord was the one turning heads. Other than that, everybody was too busy thinking about how much they loved Groot.

So what finally did it?

There was something oddly alluring about watching him get his hands dirty in "Infinity War," but that's not it. 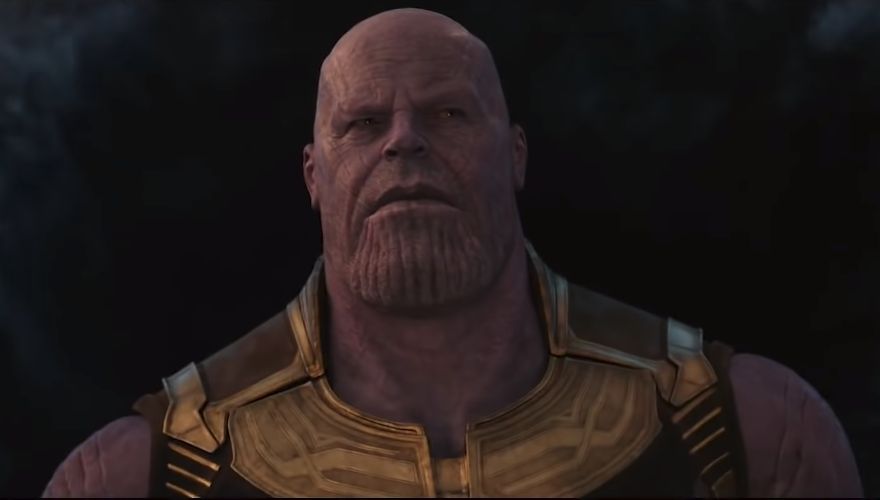 Nah, I think it has more to do with the fact that this is the movie where he finally lost that stupid helmet. It was really holding back his appeal.

Let's face it, not everybody can pull something like that off.

Being able to rock a futuristic helmet is really Hulk's thing, you know? There's a reason that the Grandmaster's audience was so excited about him and it wasn't just because he could smash things.

And you know what? That was probably what was really going on when Hulk and Thanos fought. 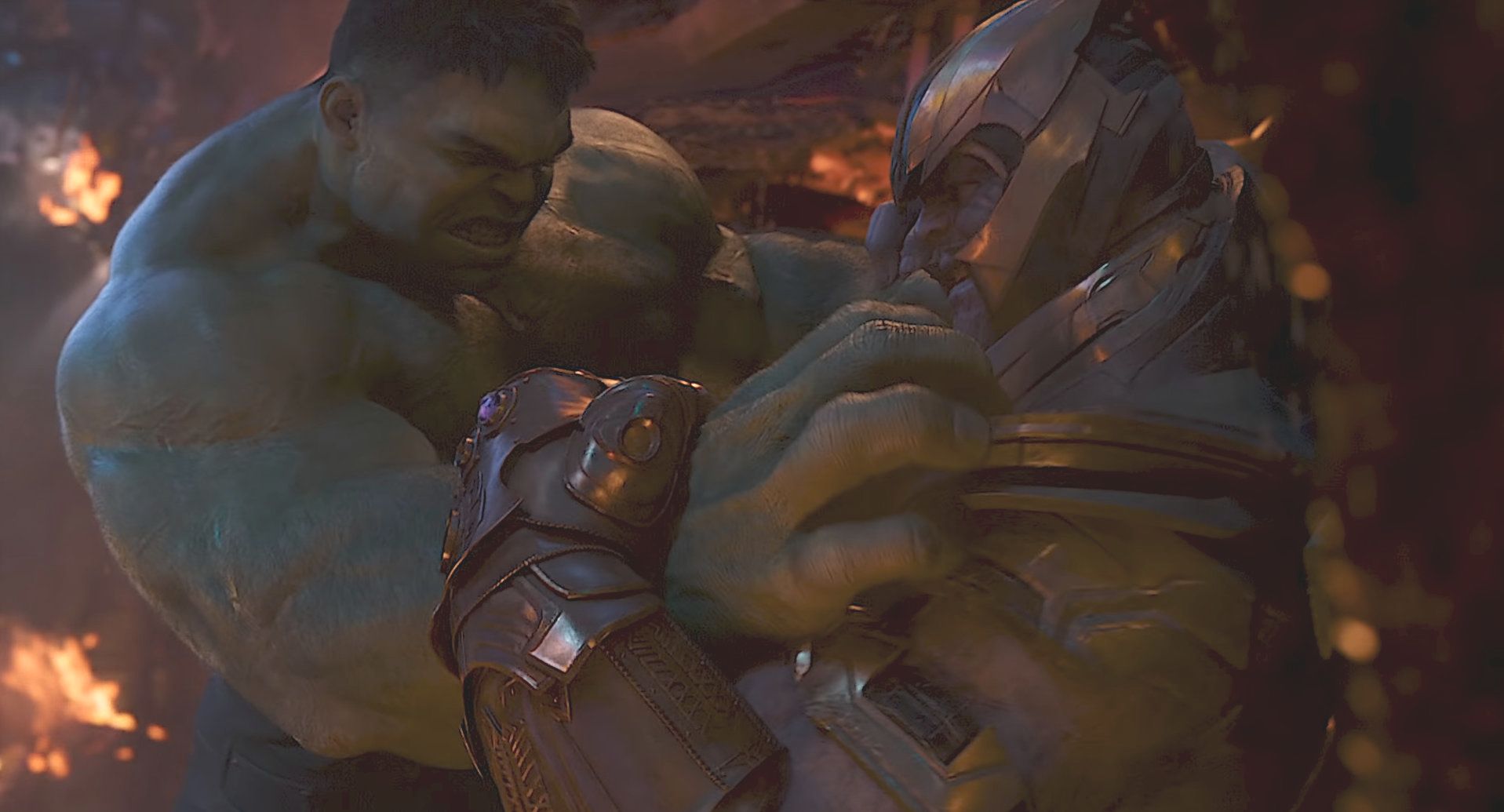 They can claim it was about collecting Infinity Stones and protecting their friends all they want, but it was about jealousy.

And that's the real reason Hulk wouldn't come out again. Thanos won the Infinity War and the fan thirst war.

I wouldn't worry, though. The next time we see Hulk, I'm sure he'll get his groove back.

Wait, does that mean that Bruce Banner will only turn heads once he hulks out? Poor guy.