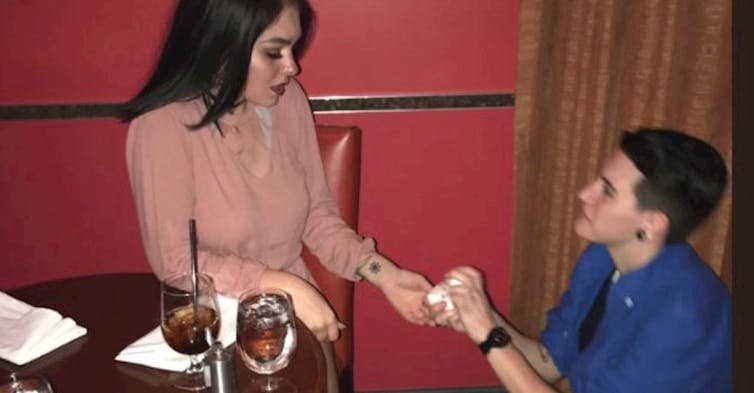 24 People Raising The Bar For All Of Us

Sometimes you just need people in your life who inspire you to just be better. Whether that's a friend, a relative, or that friend who somehow hasn't ended up getting you into prison and it's shocking because most of your stories involve varying degrees of questionable legality and high amounts of questionable morality. The people featured below are going to inspire you to be a better person and do great things.

1. This right here is relationship goals. 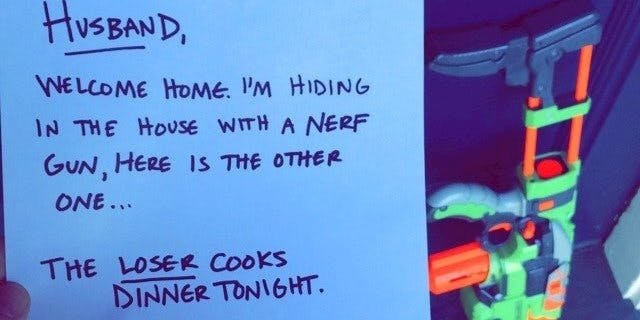 I'm impressed by the amount of lovable trolling here, and I'm the type of girl to put Smash Mouth right between Prince and The Weeknd on my Sexytimes Spotify playlist. I'd never play fair, though. I'm pretty competitive. I'd end up divorced through Acts of Nerf and I wouldn't even care.

2. This is why girls run the world. 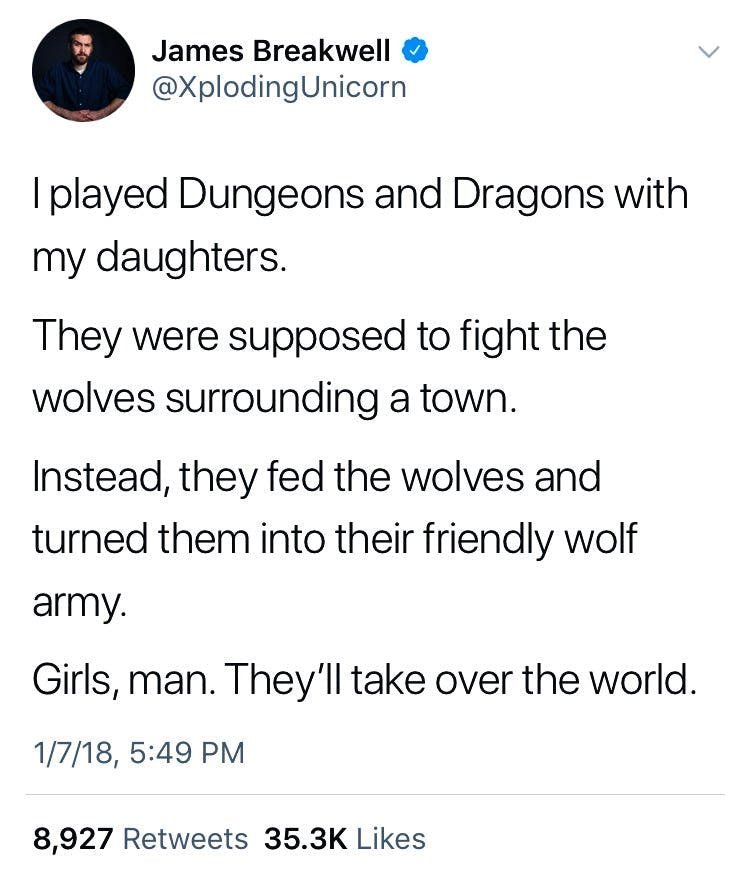 I once played a D&D game where I took control of a town and made all the goblins swear fealty to me, so I understand these girls. I also ended up getting dumped because I bailed on a date when the game ran long, but I'm the Goblin Queen now, so.

3. Don't you hate it when you get junk mail in your mailbox? Here's the solution. 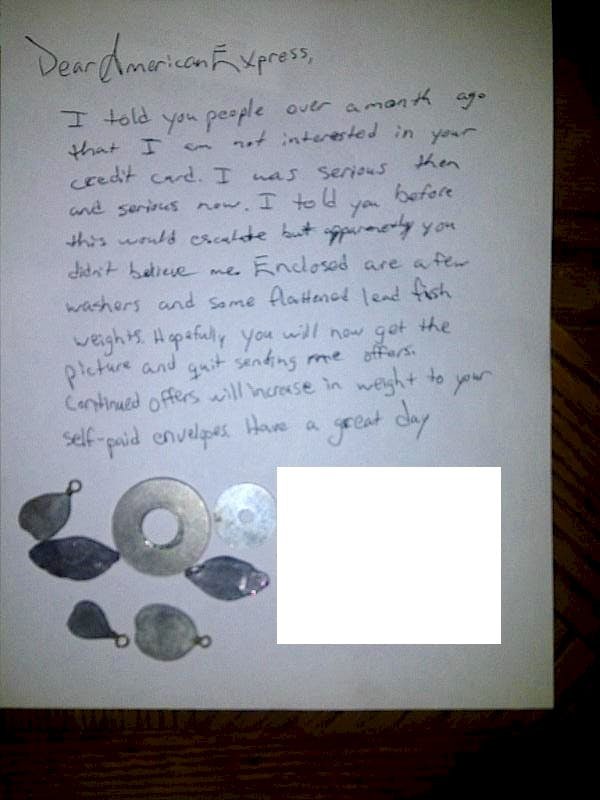 This is actually an incredibly brilliant move. If only this worked virtually it'd be great because I have been trying to get off the mailing list for a gym I joined four years ago and they keep sending me three emails a day.

4. Sometimes, not even the long arm of the law can stop you from getting your nuggets. 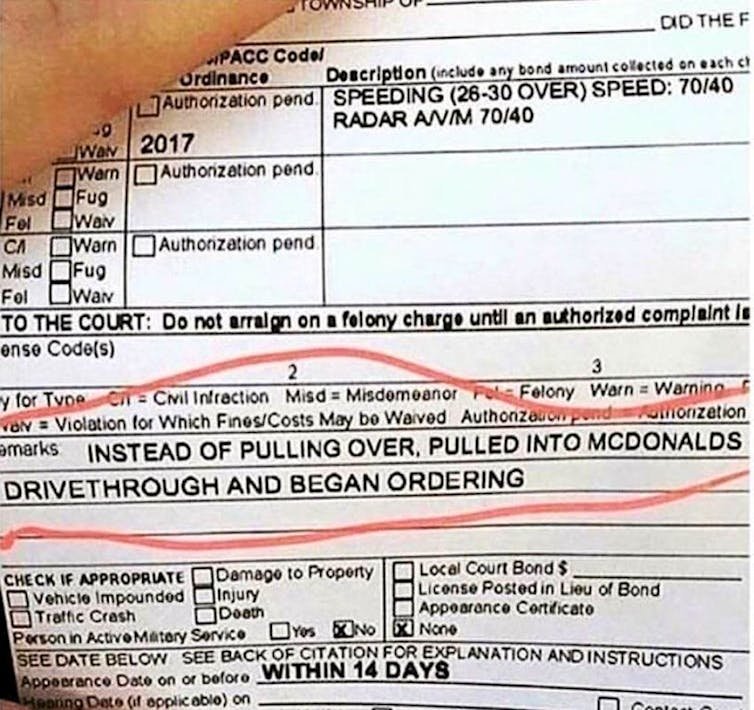 HE WAS PROBABLY JUST SPEEDING BECAUSE HE WAS STARVING, OKAY? Give the poor man a break. He just wanted some all white meat McGoodness in his belly. Maybe it was a McMergency.

5. To be fair, that looks like a damned fine dessert. 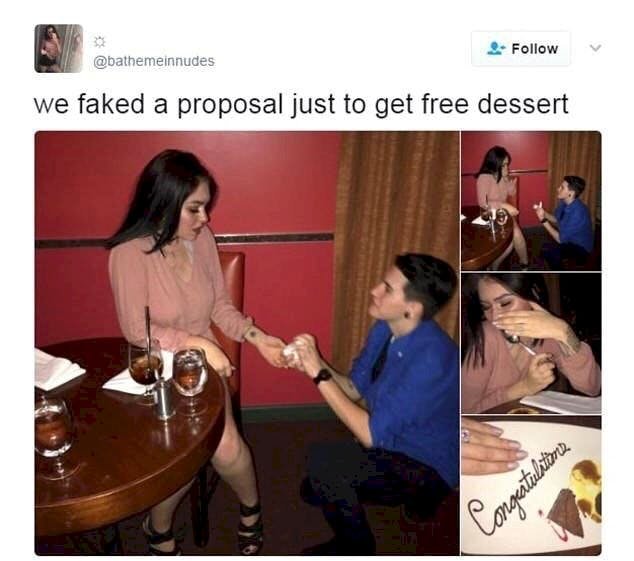 I wonder how many times you could do this before you got caught? I'm asking for a friend. A friend who really likes free chocolate. Hell, I'll propose to a girl in a Denny's if they give me dessert for it. I'm not proud.

6. Doogie Howser, is that you? 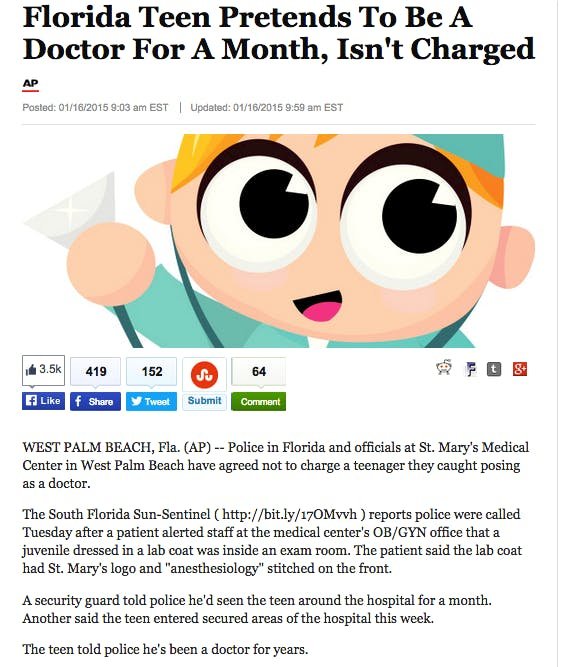 This is actually impressive. I'm not sure how he managed to do this, but I'm equal parts impressed and way too paranoid to go to the doctor for anything more than a cold from now on. Who knows who's really in that lab coat?

7. Ceiling Teacher is watching you cheat. 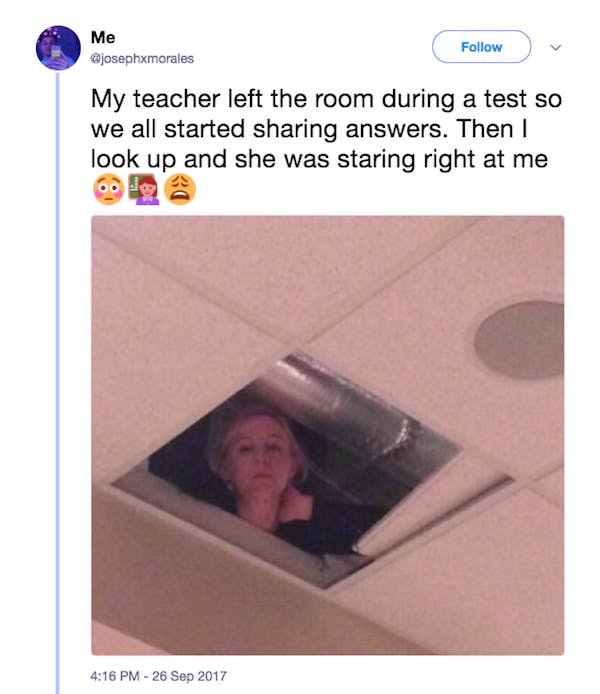 Is it just me, or would looking up at the ceiling and noticing your teacher staring down on you give anyone else the wiggins? I mean, she could have installed a nanny cam in the ceiling. It'd be less freaky.

8. I hate buying stuff online, because you can't try things on, so this is awesome. 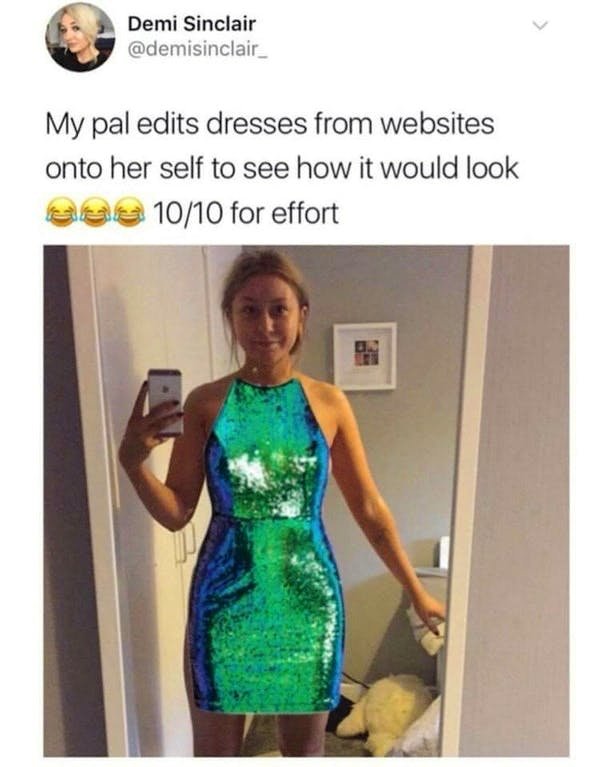 Mind you, this goes out the window when you order from one of those knockoff designer sites and pay ten dollars for a pair of pants that end up fitting your kid's doll.

9. I can't even blame this professor for being this lenient. 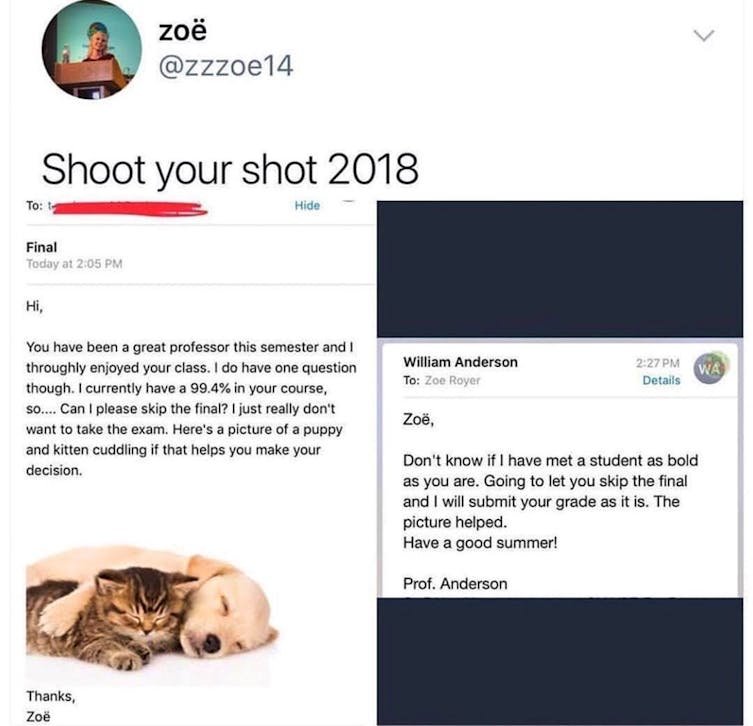 I'd be impressed by this girl's moxie too. It takes a lot of courage to ask a teacher to let you skip the final, especially when the cute photo you attach as bribery comes up on the first page of "cute animal stock photo."

10. I used to beg and bribe my parents for cash, but I feel like this person earned it. 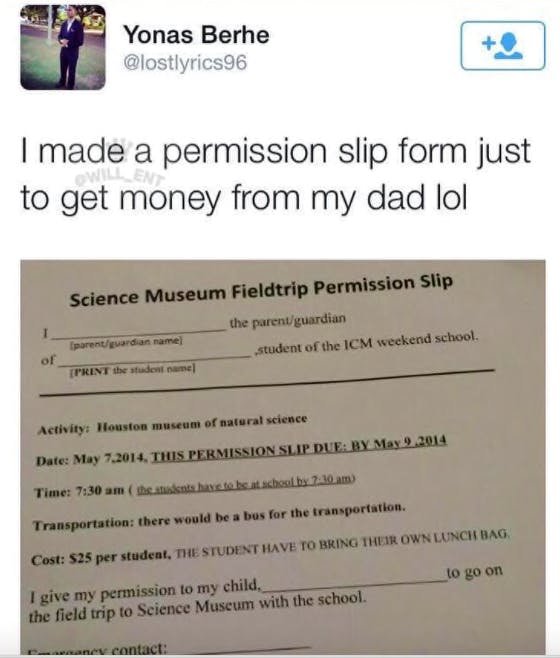 This is a really involved con, and it's super inventive as well. If my kid managed to swindle 25 bucks out of me with this, I'd be mad, but impressed.

11. This is seriously the sweetest thing, though. 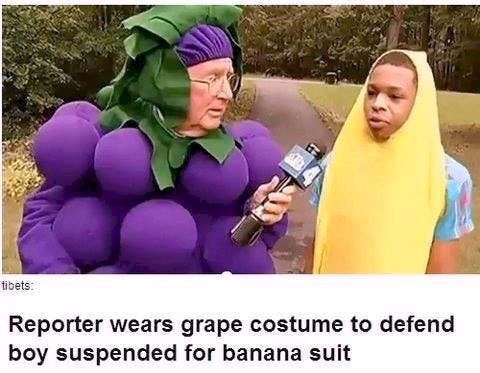 If only we could band together in support of people in such fruitful ways, life would be sweeter. This was such a grape idea. What an apeeling way to show support! Please don't wine about my puns here.

12. This is real friendship right here. 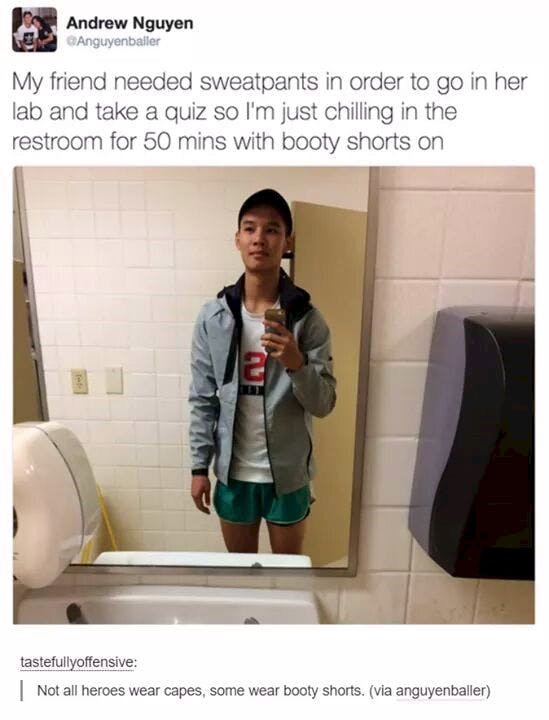 He may be wearing booty shorts, but what he did is booty-ful. And to be fair, those shorts really look great on him. He's pulling off that green color and cute '70s cut like they were made for him.

13. This may be a bit of an extreme way to prove a point. 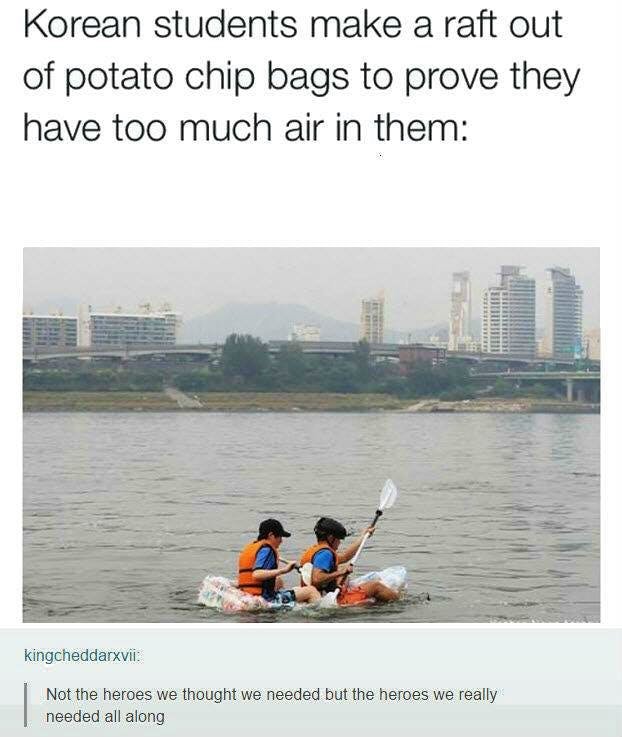 But I think that this is important scientific research. And also, I think it's great to know that I can build my own life preserver out of Doritos. You never know when you'll get washed up on a deserted island, and I'm a terrible forager.

14. Snacks at theaters are so expensive and unhealthy. 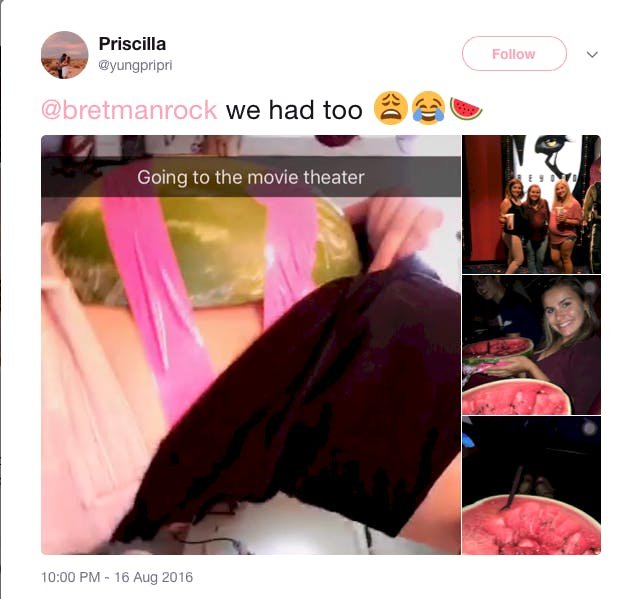 This is a great way to bring in something that won't break the bank OR contain excessive levels of sodium. Plus, nothing is more irritating than hearing someone behind you crunch their nachos or popcorn. Watermelon is a much quieter snack.

15. This high school is so open-minded, they even let a dog graduate. 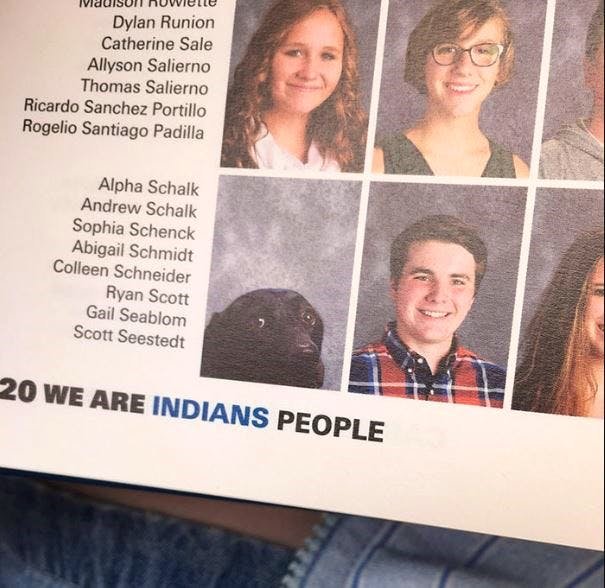 Well, actually, they let one student's service dog be photographed for the school's yearbook.

Suffice it to say, my high school was boring in comparison to this one.

16. Personally, I think all commercial airplanes without TV screens should be outlawed. 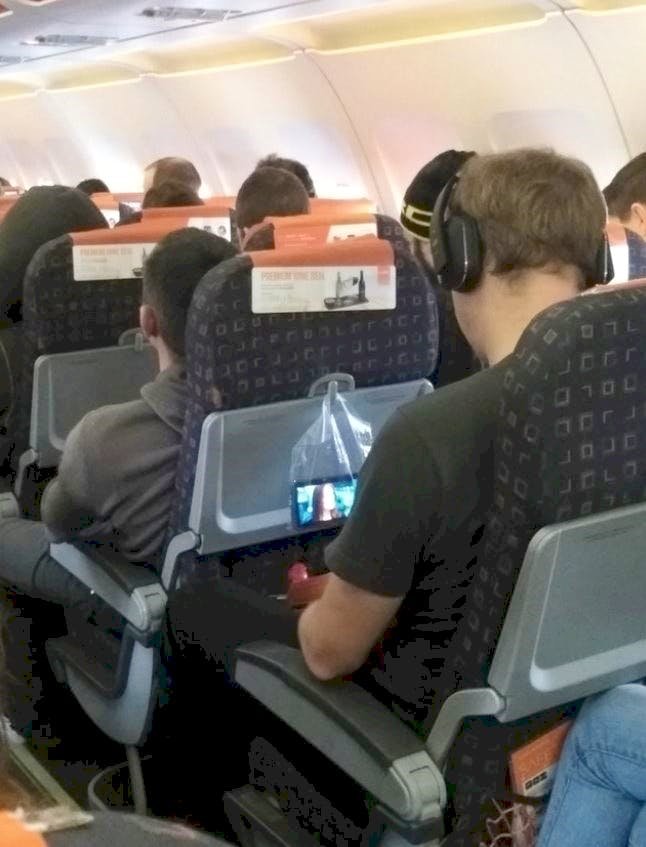 Luckily, the world is brimming with ingenious millennials who could never withstand a 3-hour flight without Netflix.

We should all be putting our phones in sandwich bags to protest these screen-less air prisons. 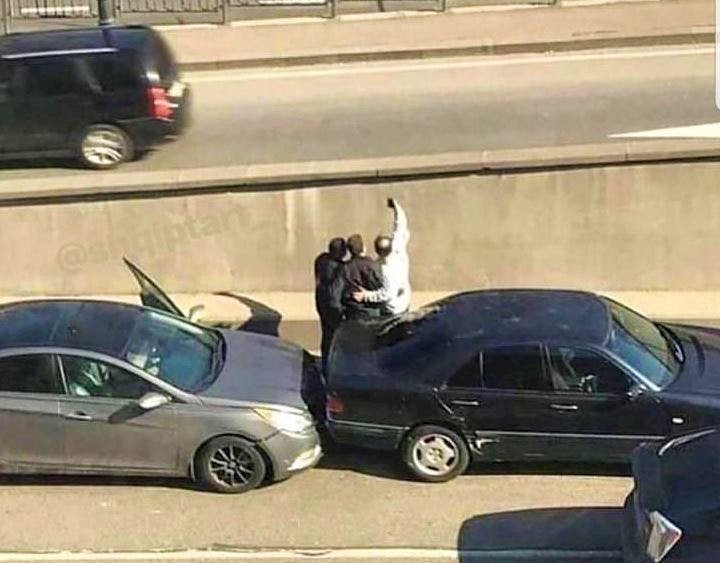 If everyone interacted with each other like this, heaven would be overflowing and hell would be empty. Naw, man. If you really want to be a good Samaritan, you better give that 90-year-old a piggyback. 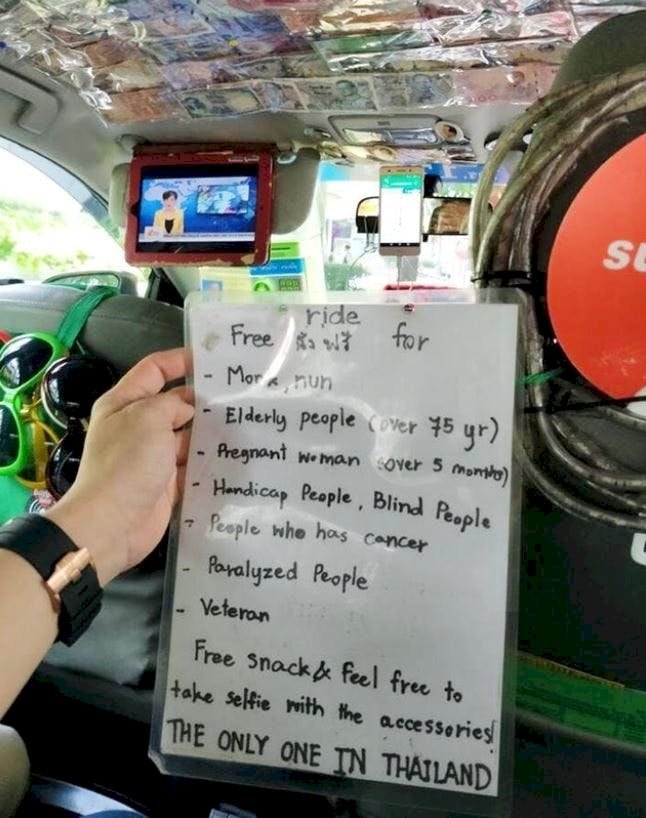 Of course, I wouldn't be able to personally take advantage of any of these things. Although, I could always do with a shame-free selfie zone.

20. Kill them with kindness, as they say. 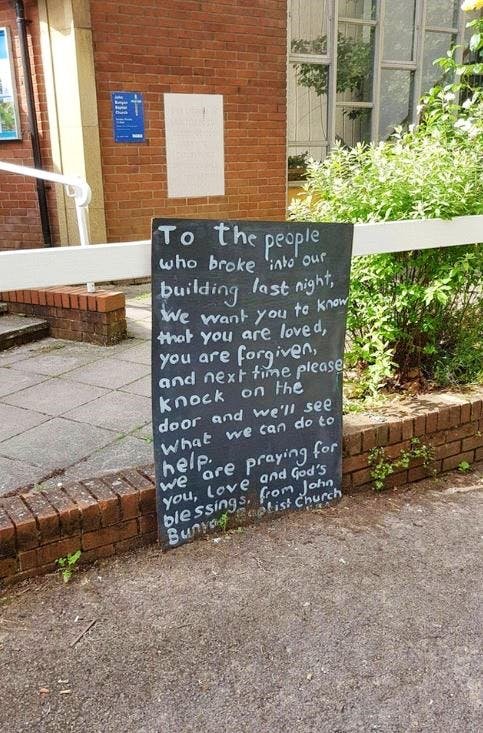 The patience and understanding required to write a sign like this is godly. In fact, yeah, I'm pretty sure it was written by God.

21. I don't know about you, but I will literally jump in front of a moving van to avoid my neighbors. 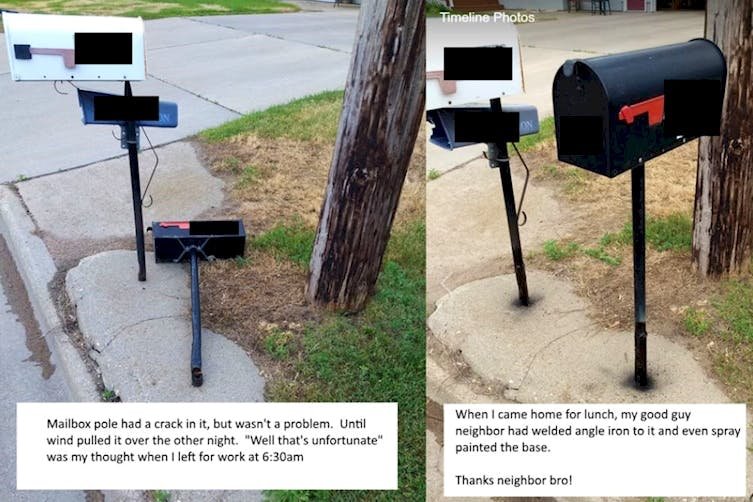 But this person actually likes their neighbor. How do I evolve to that level of humanness?

22. Not all heroes wear capes. 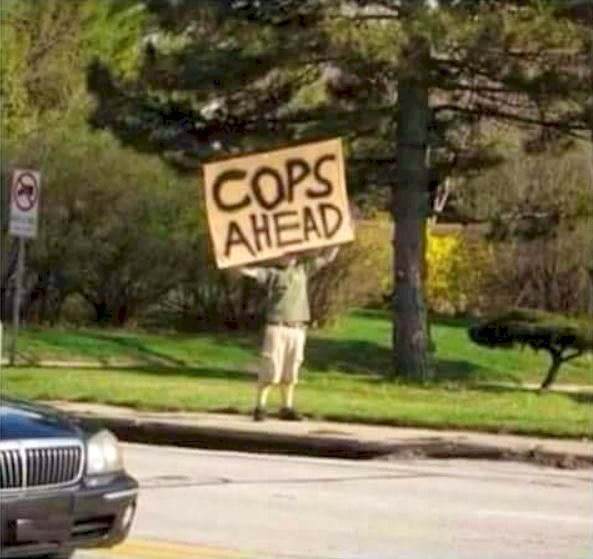 Some of them spray-paint giant cardboard signs that warn you to slow your role and get off that dang cell phone of yours.

23. On the other hand, some people like the bucket of cola. 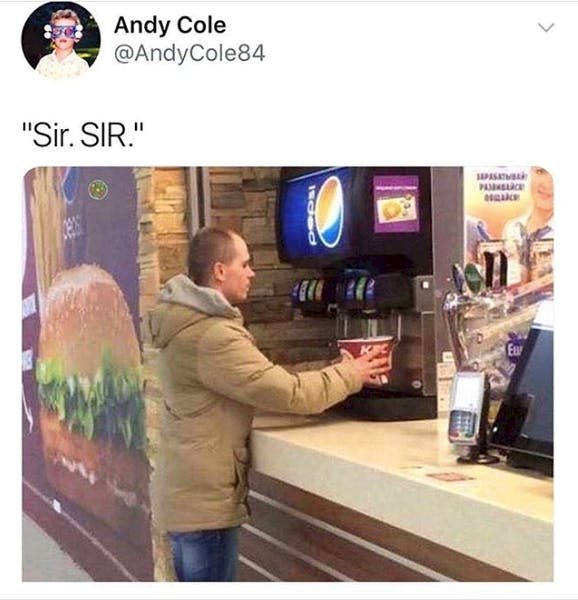 When you've gotten used to a medium soda at the theatre, the only thing that comes close is a literal bucket. And sometimes you just want six liters of cola to wash down that salty, salty chicken. 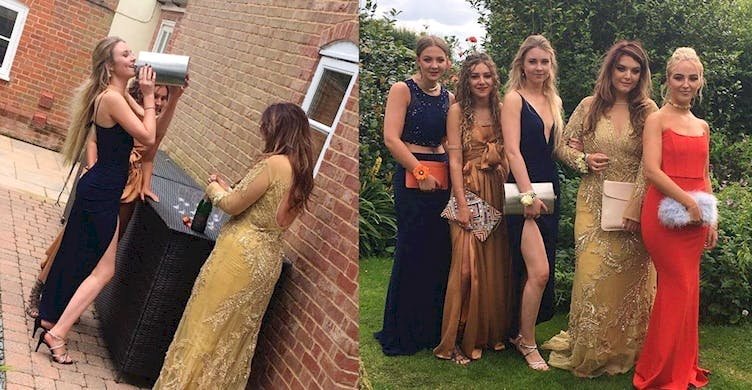 This girl managed to sneak a flask into her prom by using it as a clutch, and honestly, it goes so well with her dress that we can't fault her. That's a HUGE flask, though. Not bucket big, but definitely night full of bad decisions big.