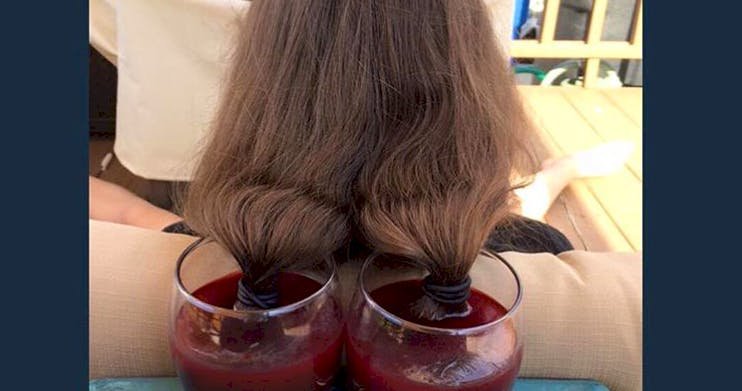 16 Pics We May Never Ever Understand

In theory, there's an explanation for every weird pic out there. Maybe things aren't as they seem. Maybe there's a little bit of Photoshop trickery involved. Maybe someone's just trying to troll the entire internet.

Either way, there's a lot of WTF-ery out there. Nobody has the time to research every weird pic, so we're forced to come up with our own explanations. 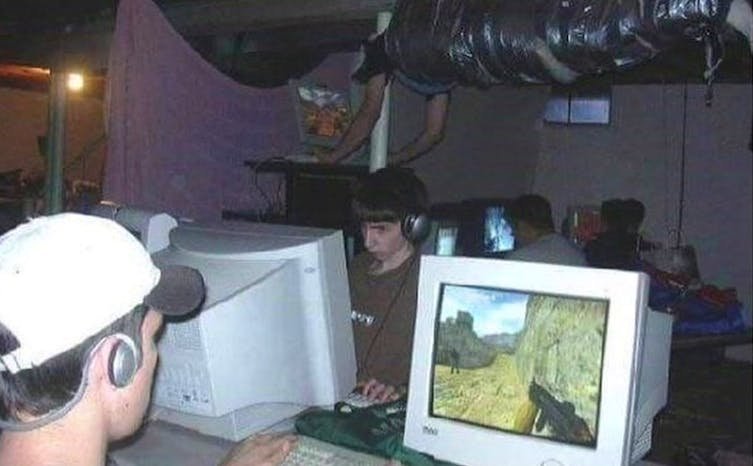 Here's a nice dose of nostalgia for nerds who grew up in the '90s. Of course, it was a different time, which is why 2000s kids will never understand the necessity of duct-taping a friend to the ceiling. 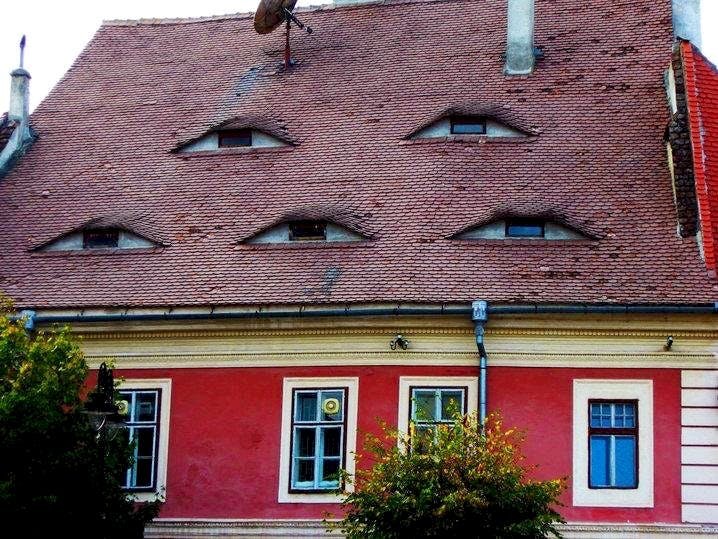 When you design your own house, but just can't trust your nosy neighbors across the street, you need a way to peer out at them through bunker-like windows in every upstairs room. Well done, paranoid homeowner. 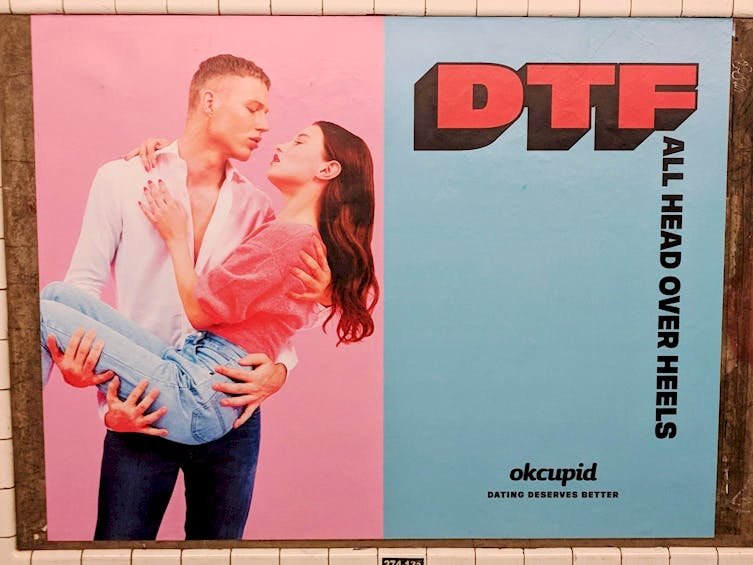 I know exactly what's going on here. OkCupid spells it right for us, even if it is in small print.

Everyone has their own idea of the perfect date, and if OkCupid thinks that perfect date is a tri-handed man, who am I to argue?

4. Sometimes you just want to be dry. 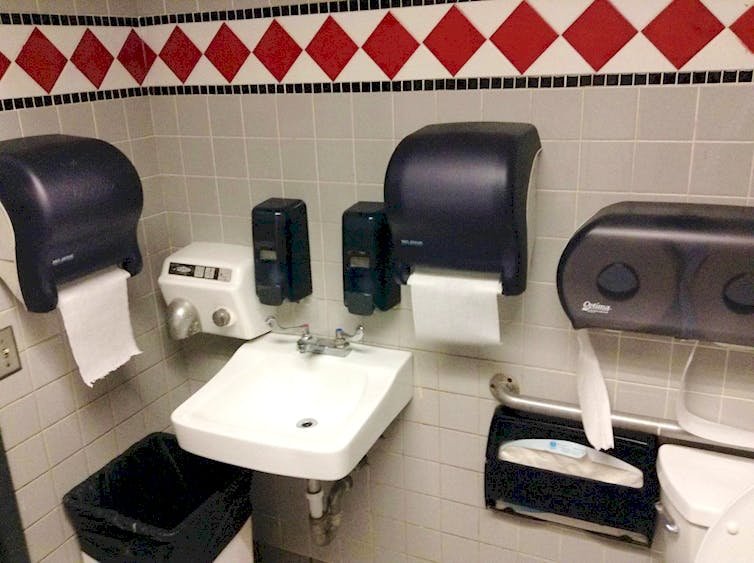 After you wash your hands, do you ever find inadequate drying options? Maybe there's just one damp towel, or a weak hand dryer, or an empty paper towel dispenser.

Well, that situation clearly happened one too many times for one person.

5. Is that how hair extensions work? 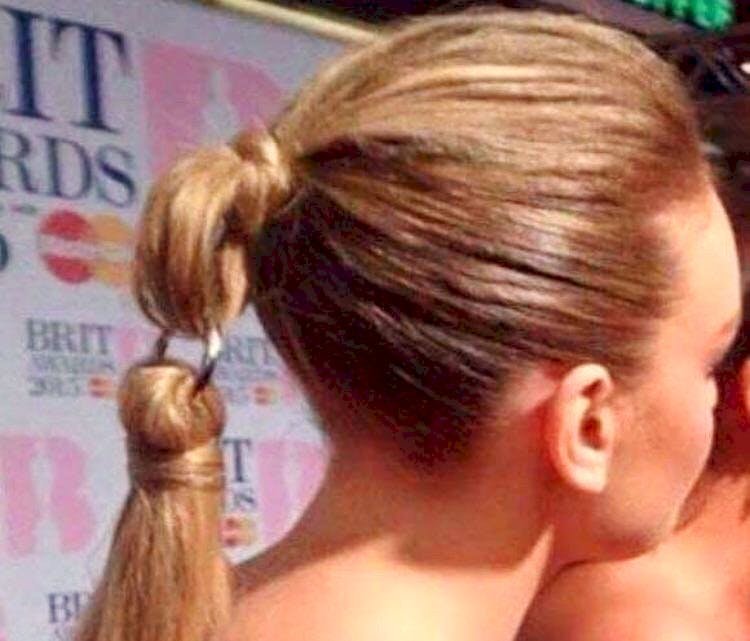 Usually the point is for the hair to look natural, but if you want that half-cyborg look, you've gotta get those stainless steel rings in your hair. 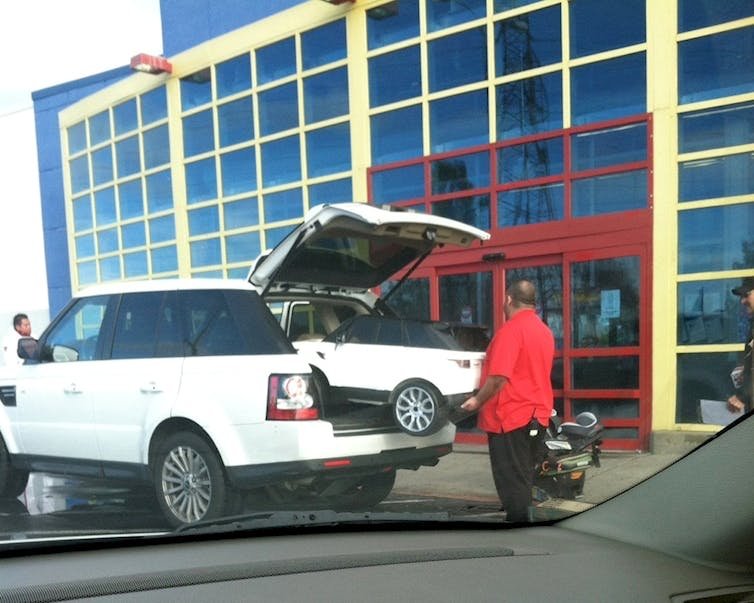 They'll spend their first few months at the dealership, learning how their various systems work, before entering the wild. Someday they'll birth their own baby Land Rovers, completing the cycle. 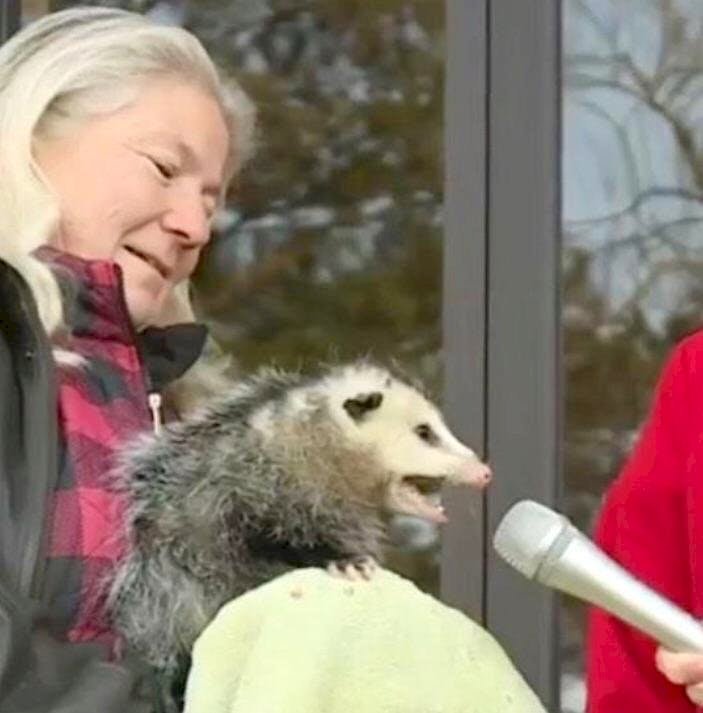 After completing a heroic act, whether it's winning the Super Bowl or saving children from a burning schoolhouse, the hero deserves a chance to be heard, possum or not.

8. Don't worry, they make it for humans now. 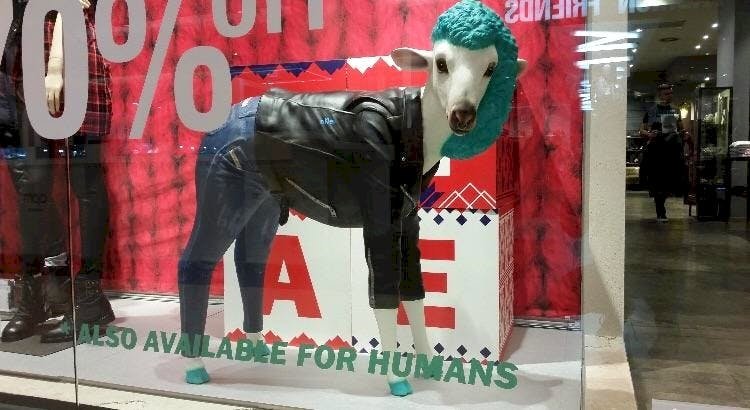 In some strange corner of the world, high fashion isn't for people — it's for sheep. But the times are changing, and soon humans will be able to enjoy sheep fashion. 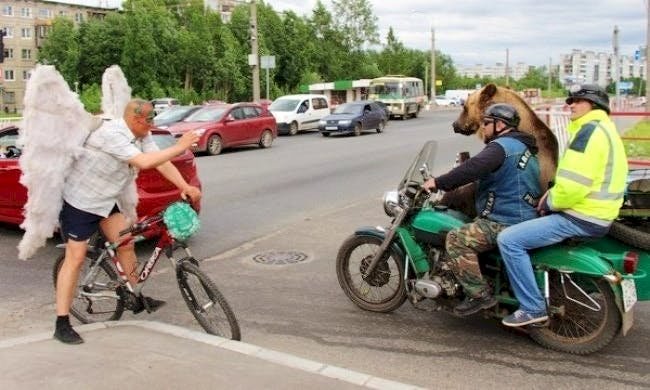 You just know things are going to get awkward when a cyclist dressed as an angel crosses paths with two guys on a motorcycle and their pet bear. 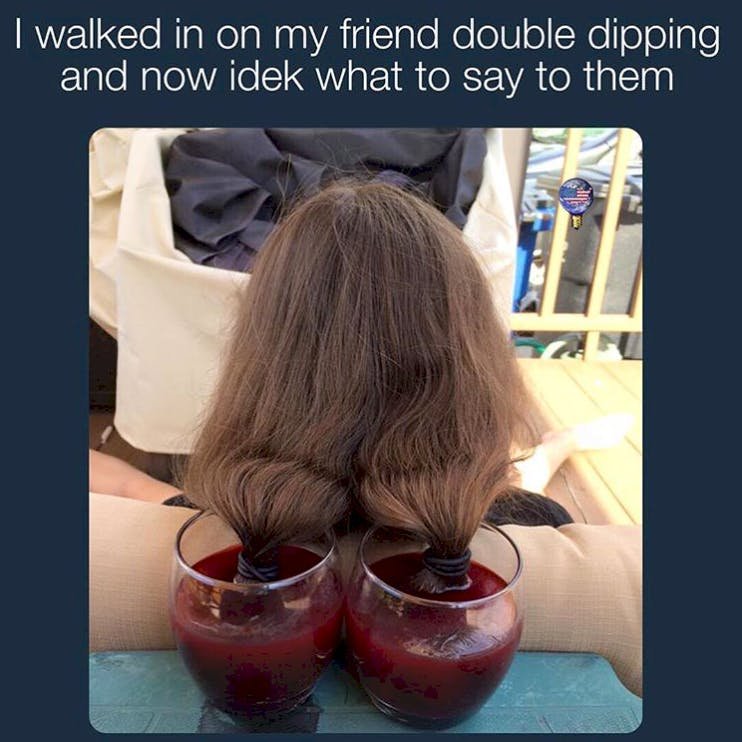 If this lady has found a way to absorb drinks on the sly, behind her back, through her hair, she owes it to the world to share her secret.

11. Necessity is the mother of invention. 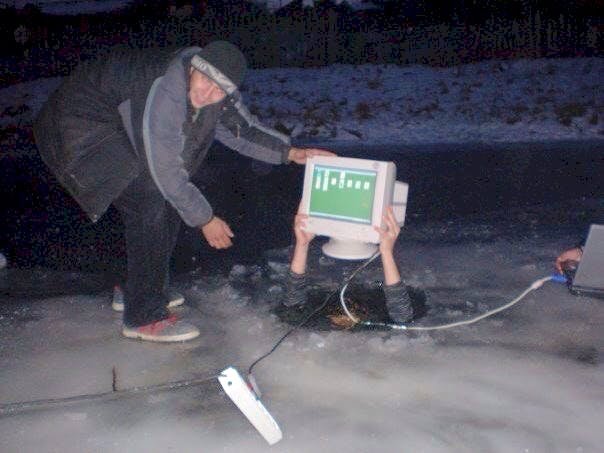 If you're trying to LAN it up on an ice floe (as one does), sometimes you need a monitor stand. That means somebody's gonna have to take one for the team.

12. When Twinkies have too much advertising budget. 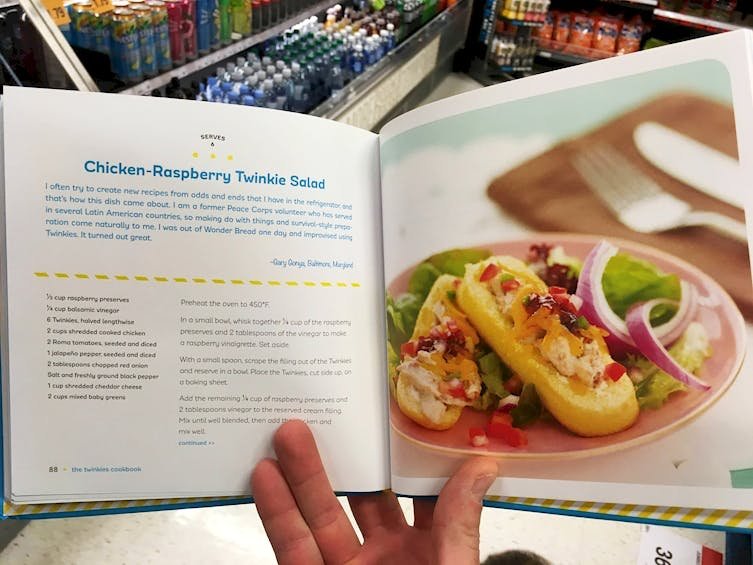 There are only so many ways to sell Twinkies, so when an advertiser is ordered by the Twinkies CEO to find a new way, they need to get creative.

13. When you want to enjoy an aerial view of your toilet. 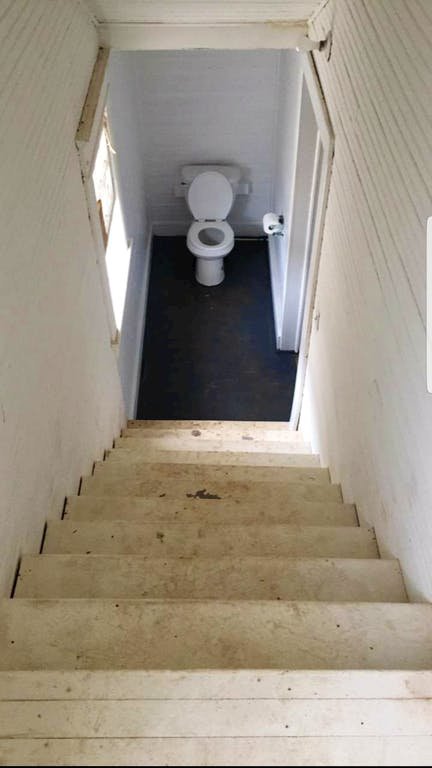 Toilets are an essential component of modern living, but we rarely get to view their majesty from a bird's eye view. This solution remedies that. 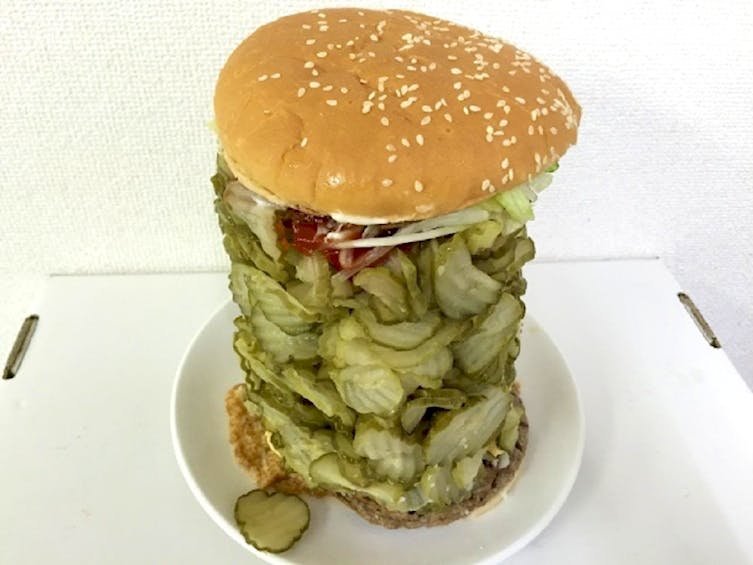 Customer: "I'll have a burger with a few extra pickles, please."

Server: "One burger with every pickle we have and ever will have, coming right up!" 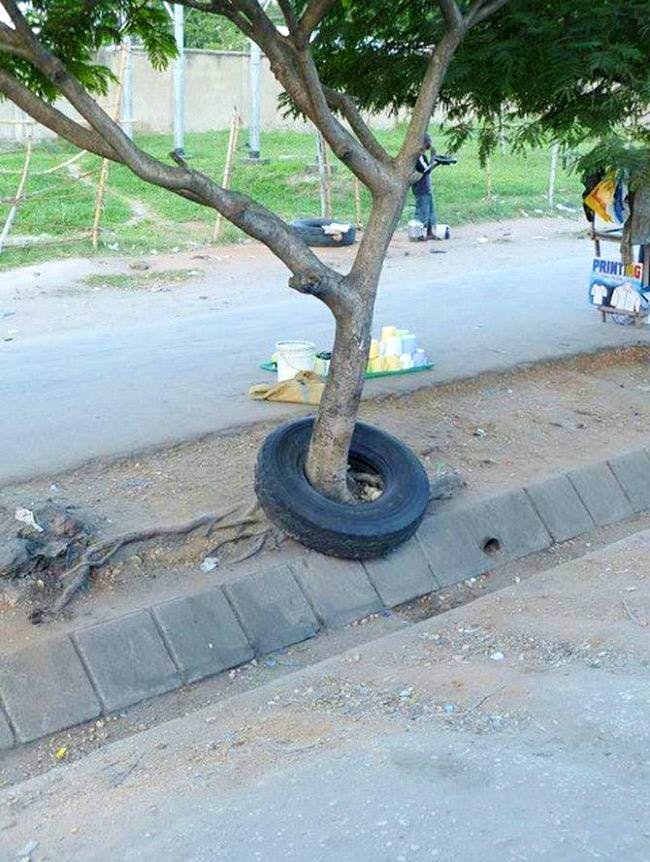 Over the years, trees get wider, more expansive, and generally bigger. But when they need to, they can slim down enough to get a tire stuck around them, just like their skinny days. 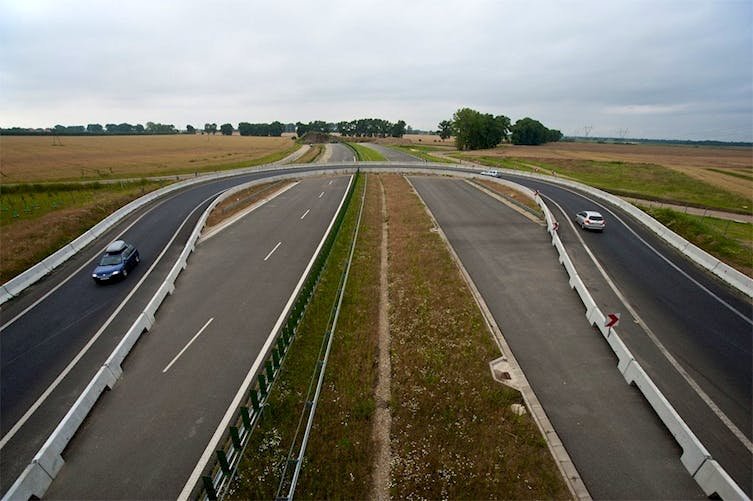 Planners usually build roads for a reason, but sometimes they apparently give up on construction and send drivers back the way they came.