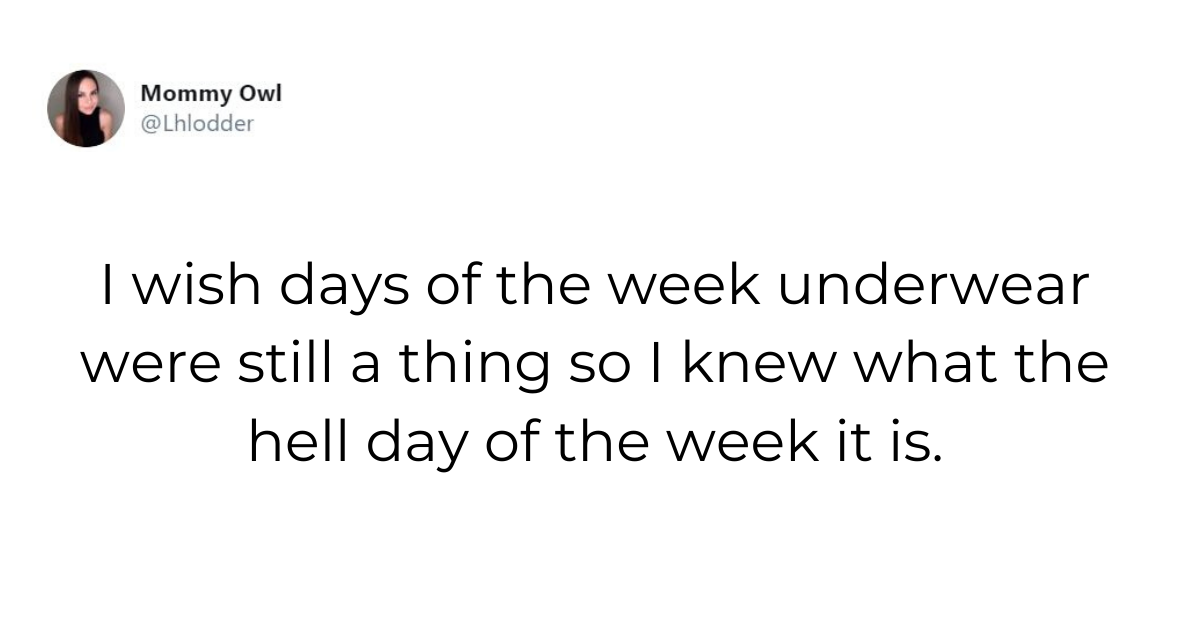 16+ Hilarious Tweets From Women Who Know Just What To Say

As Sebastian the crab from The Little Mermaid would say, "The human world, it's a mess." And boy, would he be right.

Wouldn't you give anything to be a lil' crab orchestrating an underwater band right about now? Well, too bad because you're a human and I'm a human and we don't have the luxury of flip-flopping between land and sea like little miss "can't-make-up-my-mind" Ariel over there.

So instead we'll just deal with the nonsense we gotta deal with for now, and the best way to do that is by enjoying some hilarious tweets from women. Because as Sebastian would also say, "Those tweets sure do make me laugh."

(No, he definitely said that. Re-watch the movie.)

It's my worst nightmare.

That's why as soon as things even remotely start to wrap up, I am out of there. I don't even stick around to wave at people anymore. Is it rude? Yes. 100%.

But I absolutely refuse to be the last one left in the call awkwardly smiling at the host while I fumble with my mouse to try and hit "end".

Karaoke isn't a game; you can't just pick *any* song.

If I'm ever in a situation where I'm forced to pick a karaoke song (God forbid), I know which ones I'm definitely not going to choose.

Top of the list? "American Pie." Yeah, I'll pass on trying to keep the audience's attention through all 20 verses.

The quickest way to ruin any stroll outside is to come across a man. I guarantee your mood will drop instantly and you'll regret ever leaving your home the second they try to talk to you.

I'm sure her date understood completely.

I used to think Jeopardy was the lamest game show on TV. I was young. I was naive. Now I understood just how great it is.

After all, the word pardy is in there for a reason.

We really thought we were doing something with these.

I can clearly remember circling them in the Sears catalogue and begging my mom to buy them for me because I was convinced these clunky, chunky shoes were the key to my success in life.

The one thing I don't miss during this quarantine? Bars.

I was already actively avoiding going out for drinks before the world shut down. You think I want to spend $40 on two shots while some sweaty, middle-aged man in a golf tee tries to talk to me?

Nah nah nah. I've got alcohol at home, thanks.

That's how you know it's go time.

The second I've plopped myself down on the couch with an iced coffee and plugged that bad boy into the wall? That's when I'm ready to start talking to people again.

I like to tell myself I'm only going to spend x amount of money this month, and then spend three times that amount.

Why? You tell me.

It's melting mozzarella cheese over some nacho chips and convincing yourself you'll be fine, even though history has proven you most certainly will not be fine.

I didn't know my tongue held memories but here we are.

Sitting here right now, I can taste that bland, flavorless ice cream that always just ended up taking on the flavor of the damn spoon.

Remind me why we liked these so much?

I miss those moments before the movie starts when you're watching upcoming movie trailers and after each one you and your friend become film critics and you tell each other whether you think it's worth seeing or not.

Why isn't there a team on this right now?

Hello, anyone who wants to make a splash on Shark Tank — I think I've just found the big idea you've been looking for.

Get rid of those "special skills".

I guarantee any prospective employers will be ten times as impressed by this fact than they will be about your proficiency at Photoshop.

Honestly, at this point in my life I've already accepted that there's no point in fighting myself anymore.

"I'll take every box of every cookie you have, please."

Hey, it's for a good cause, right?

When I watched this movie as a kid, I was terrified of this man and spent the whole movie wondering what Maria could possibly see in him.

As an adult, I now understand completely.

I like to end each and every day by lying awake in bed while reliving every decision I've ever made, everything I've said, and everything I will have to do or say in the near future.

Any help is much appreciated, thanks.

At this point in my life I'm just at a total loss so I think it's time I extend the query out to everyone else, just in case someone knows something I don't.

I hurt my neck rolling over the other day.

I can vividly remember falling out of a tree when I was a kid, and then getting up and chasing my brother through our backyard afterwards.

Now I can't stretch wrong or I'll end up alternating between ice and heat for the next three days.

I'm pretty much over every single radio advertisement, Facebook post, and TV commercial reminding me how these are "unprecedented times".

Someone get me a Sharpie.

The other day I spent like, five hours fully believing it was still March before I realized that year had already passed.