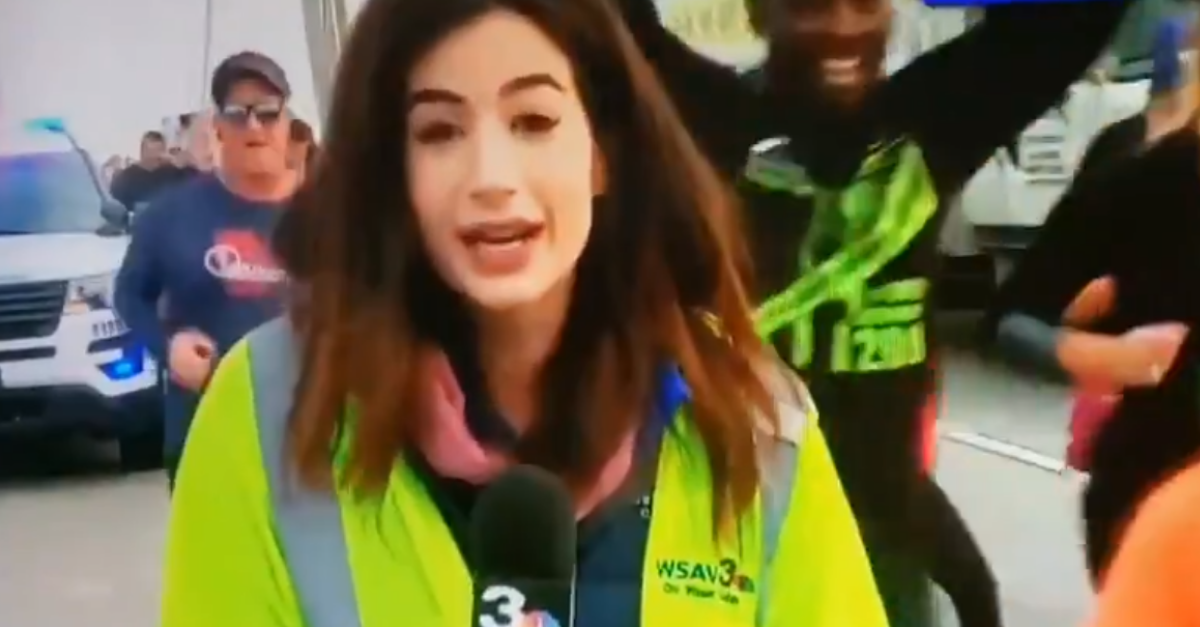 Sprinter Banned From Racing After Slapping Reporter's Backside In Video

Although some journalistic jobs are obviously more dangerous than others, one of the most nerve-wracking experiences in even the safest of communities is delivering a live report.

If a reporter makes a mistake or somebody interrupts the shoot, the solution is normally as easy as doing another take and making sure the first one never sees the light of day. But as they say, anything can happen when you're live and some members of the public seem to have a sixth sense for live reports.

While their interruptions often involve yelling something dumb into a reporter's microphone, some of their intrusions can take on a darker character. Sometimes, these people get physical and and over the weekend, one reporter faced a particularly uncomfortable case of this issue. 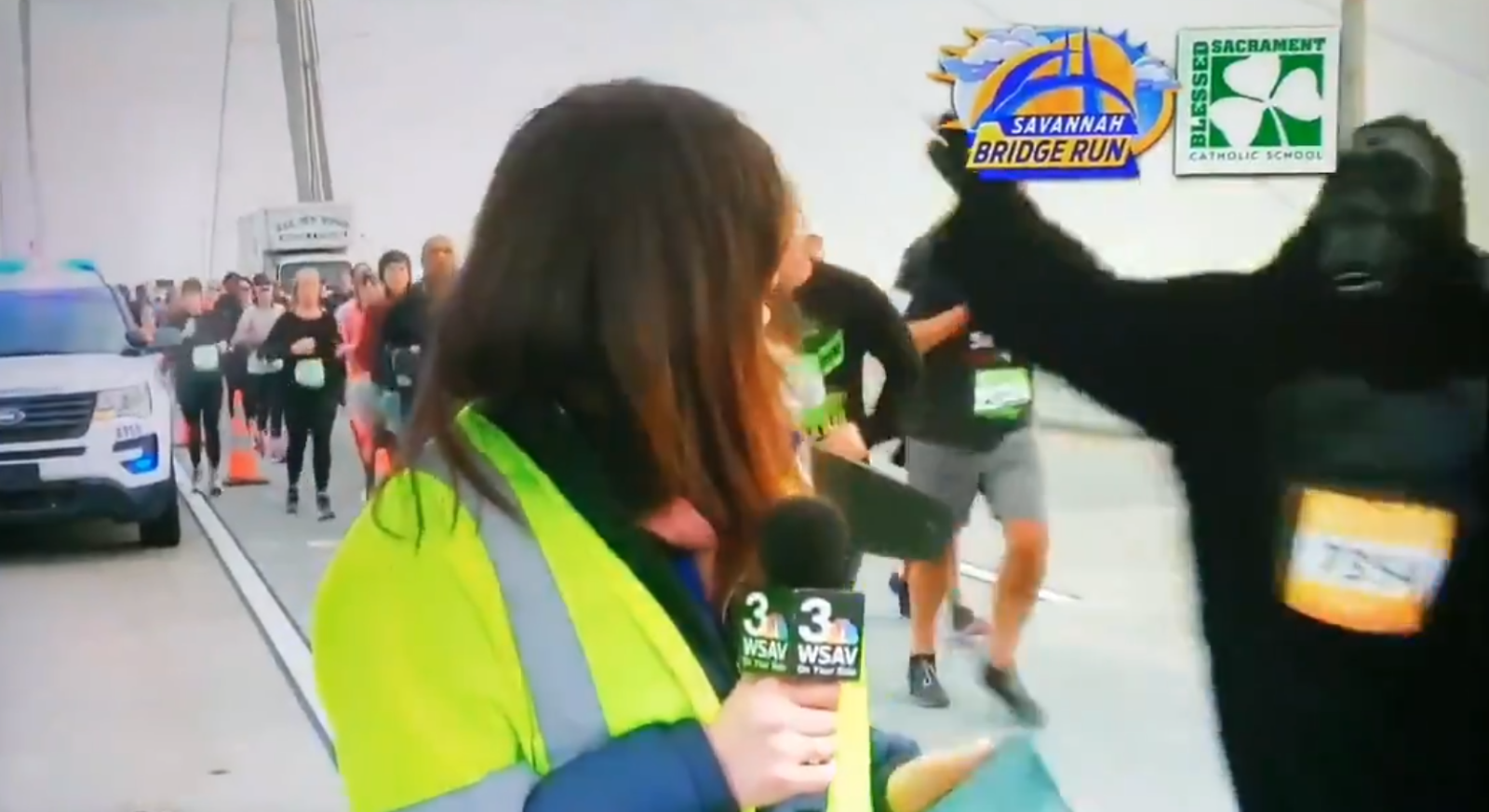 A Twitter user's clip of this broadcast starts out innocently enough as a person in a gorilla suit runs by waving their arms.

Bozarjian laughed and said, "Whoa, not expecting that," before describing the enthusiasm of the racers. 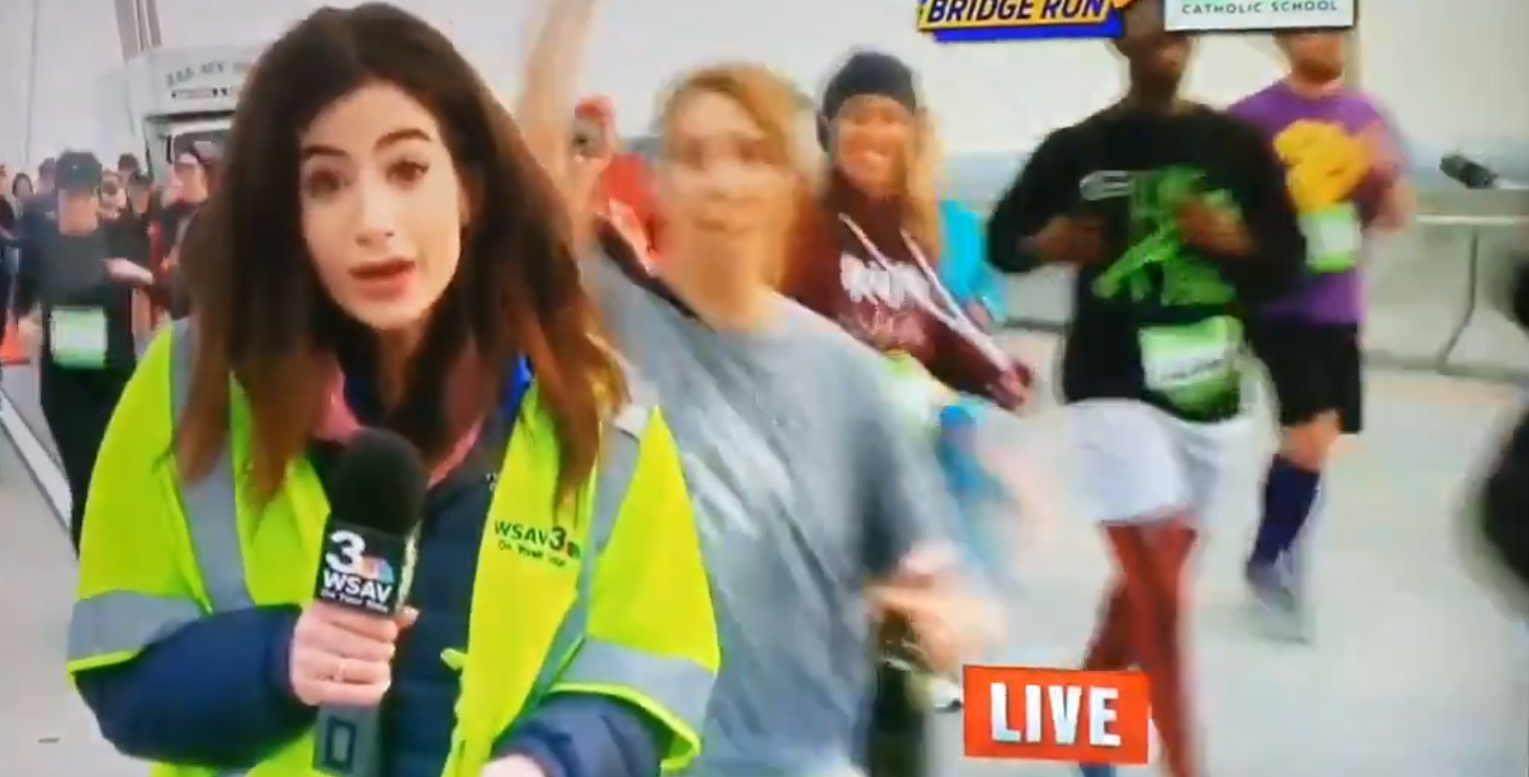 Throughout her report, many of them quickly dart in and out of the space behind her and wave their arms.

So far, so lighthearted as none of them actually touch her. 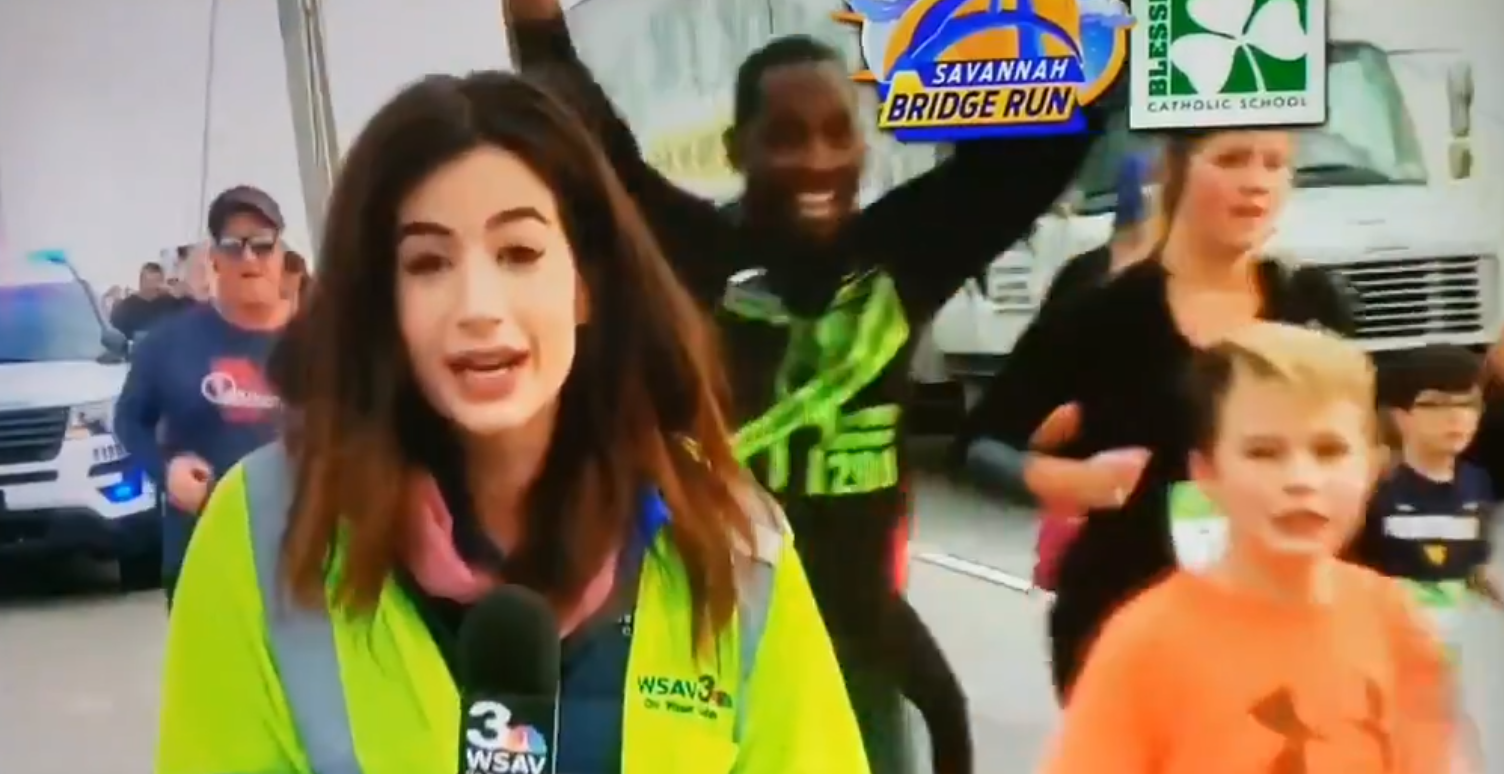 However, that soon changes when the man to the left of this photo runs up and approaches Bozarjian.

From his facial expression and the position of his arm, it's not hard to interpret what he does next. 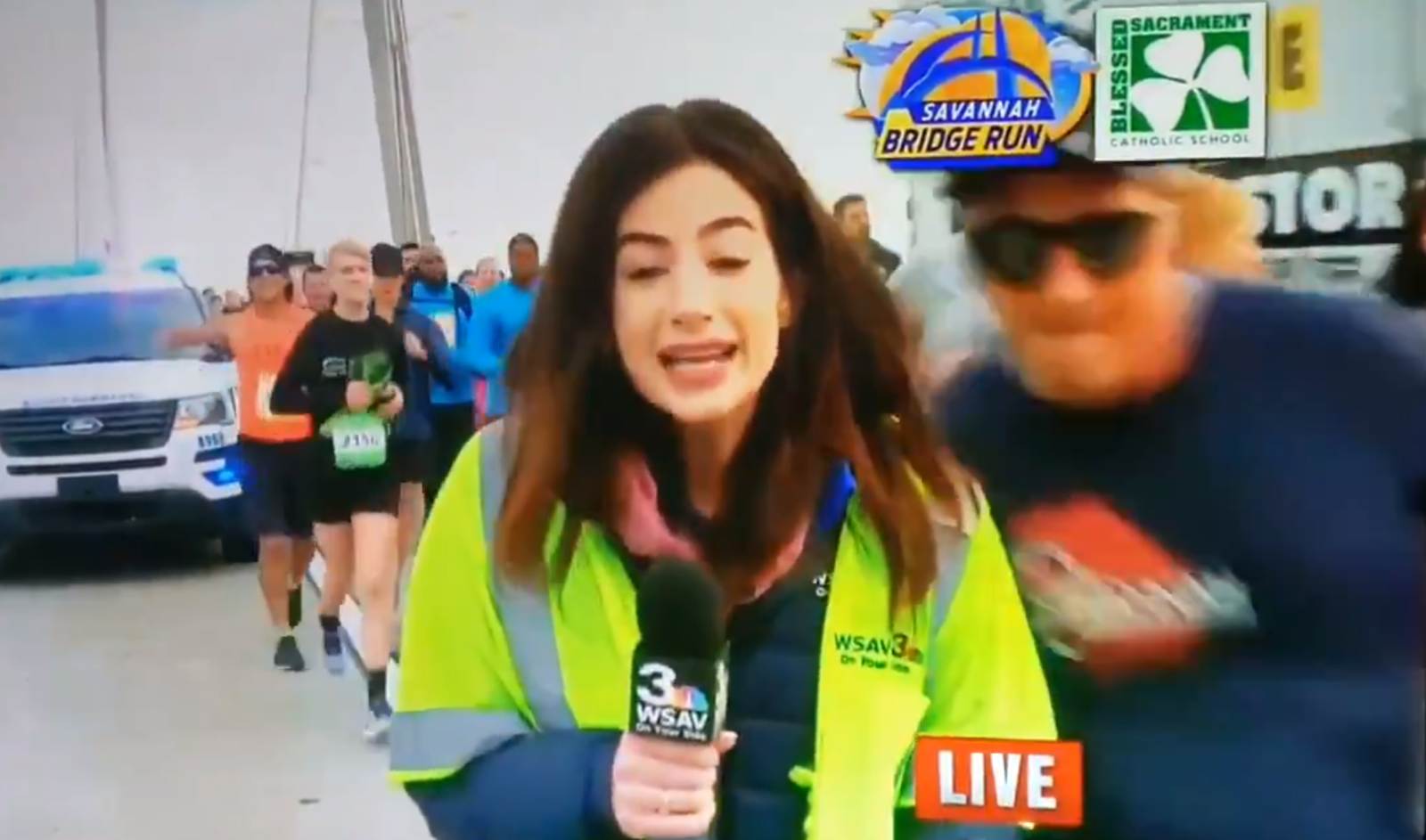 He crosses behind Bozarjian and can be seen slapping her on the buttocks.

Although Bozarjian is clearly shocked by the man's actions, she continues her report. 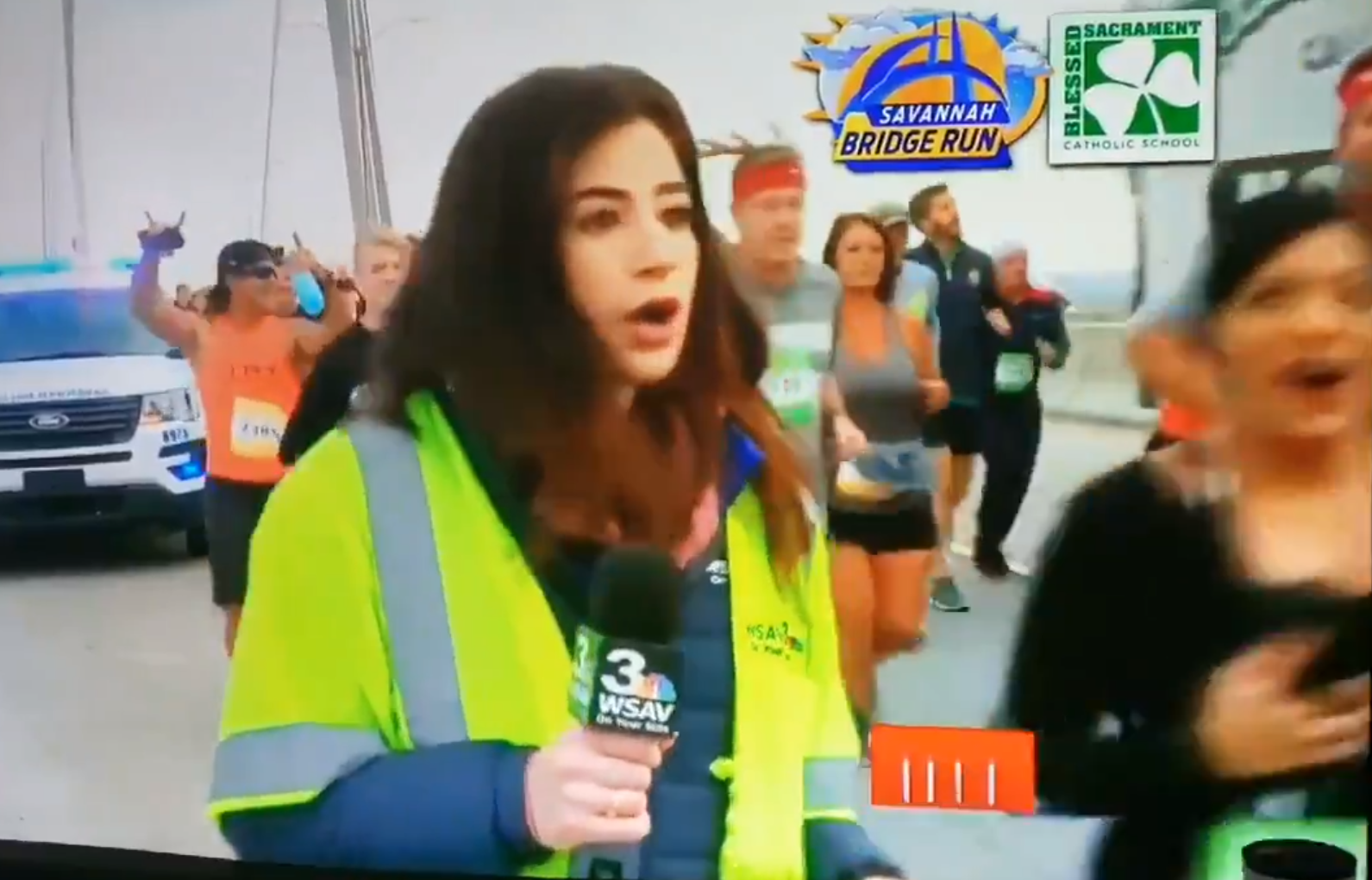 As she would later write on Twitter, "To the man who smacked my butt on live TV this morning: You violated, objectified, and embarrassed me. No woman should EVER have to put up with this at work or anywhere!! Do better."

From the man's bib number and photos from the event, the Savannah Sports Council has identified the man as Tommy Callaway. 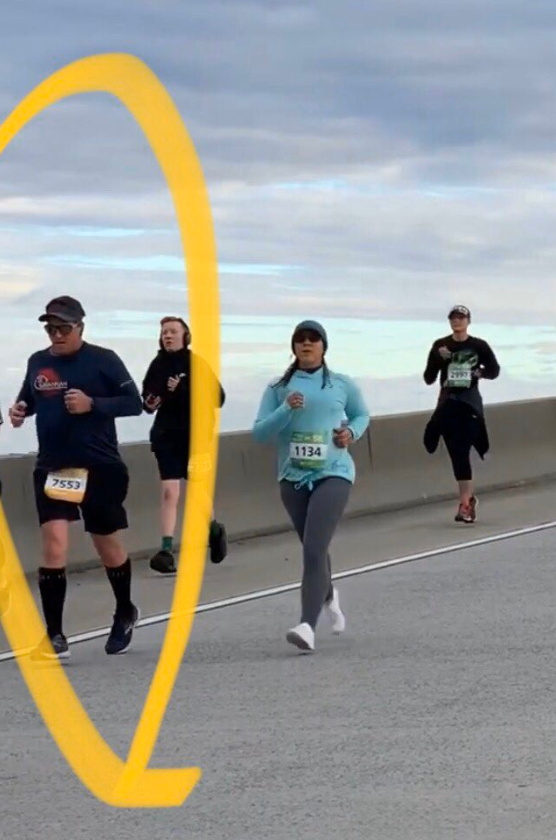 As Buzzfeed News reported, the council has also decided to ban Callaway from future racing events.

The Savannah Police Department also confirmed that a police report has been filed in connection to the incident.

Facebook posts showed that Callaway was involved with the youth ministry at his local church. 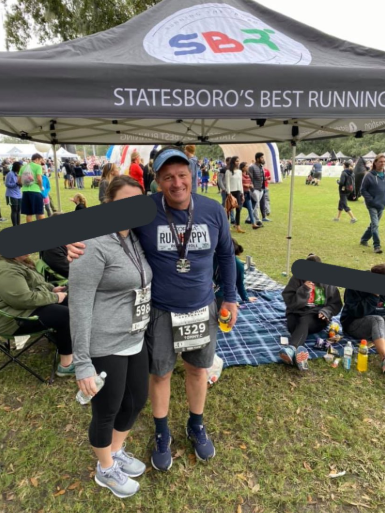 Callaway's lawyer, Joseph Turner, told WTOC, "While we regret the situation, Mr. Callaway did not act with any criminal intentions."

Bozarjian would later tell CBS This Morning that Callaway contacted the station and said that he didn't mean to hurt her.

Bozarjian later said that she felt a strange sense of guilt about the incident as if she had done something wrong.

And although she has received what she described as "an outpouring of support" from people of all ages, that feeling was apparently made worse by harassment she has since received online from people telling her she should "just get over it."

To this, she said, "Maybe 10 years ago that was a more common thing in culture, but it’s not okay now. It’s not okay to help yourself to a woman’s body just because you feel like it."