15 Jokes In Kids' Movies We Only Understood As Adults 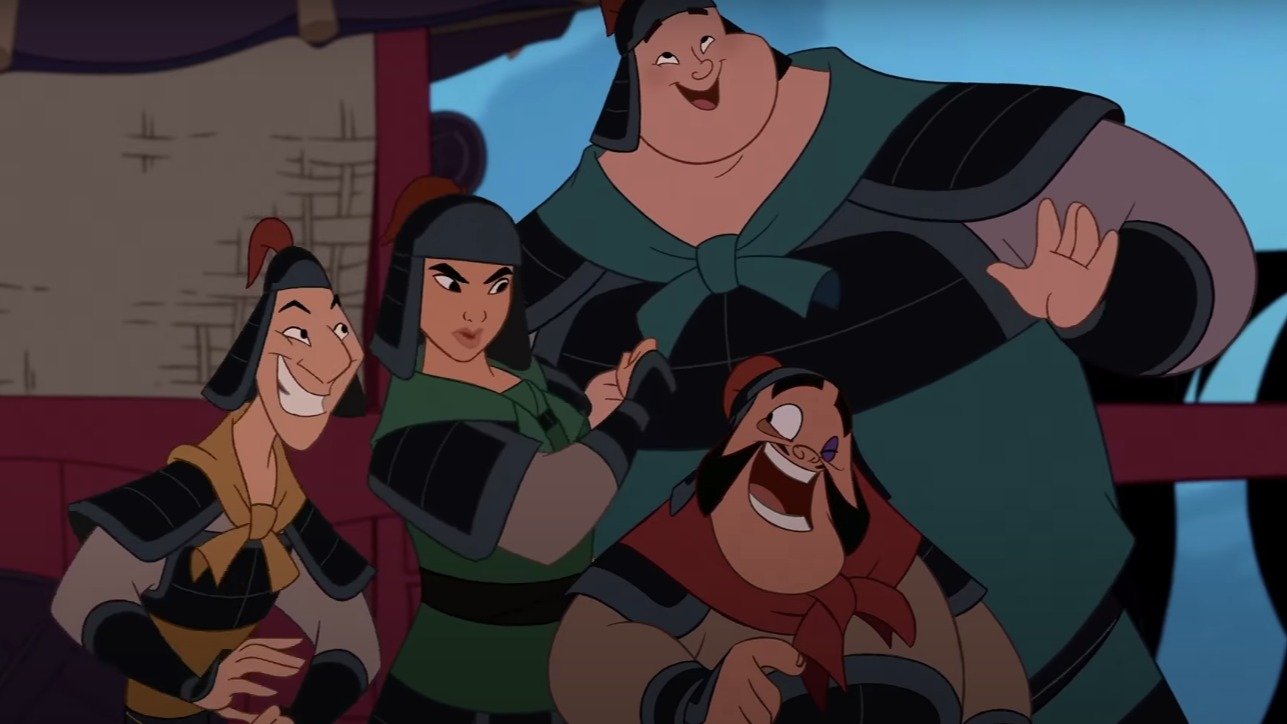 While family films are typically catered toward children, sometimes the creators sneak in a few racy jokes that are just for the adults. As children, we usually recall our favorite scenes, funny moments and characters but the raunchy jokes don't register — until we grow up. Here are 15 jokes in children's movies that are definitely not for the little ones.

Children around the world have every line and musical number from Frozen engraved in their souls, yet there's one line that hopefully goes right over their little heads. When Anna and Kristoff are searching for Elsa on Kristoff's sleigh, he questions how well she knows Hans after hastily agreeing to marry him. He suggests things she should know about him — including his foot size. Anna assures him that "foot size doesn't matter," and adults know exactly what they're alluding to. Whether it matters or not, we're pretty sure Hans has some teeny tiny feet.

When Shrek and Donkey arrive in Duloc, they get a welcome performance unlike any other.

The welcome song has a line that reads,"please keep off the grass / shine your shoes, wipe your...face!" but most people know "face" is a fill-in for a much edgier rhyme that the movie wanted to allude to for the grown-ups. Many children took it as awkward timing in a fun song, but adults knew it to be a slightly gross joke. 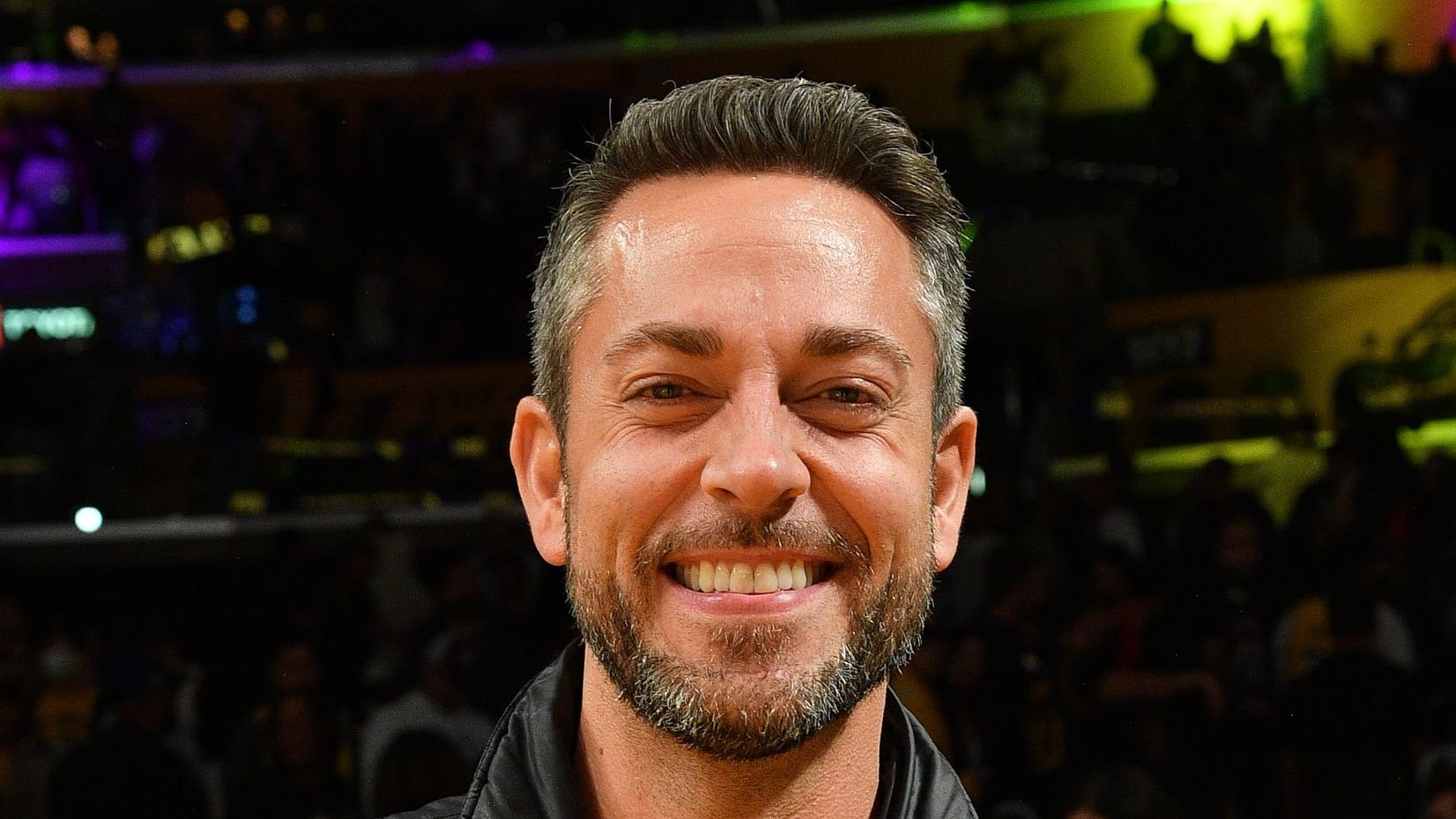 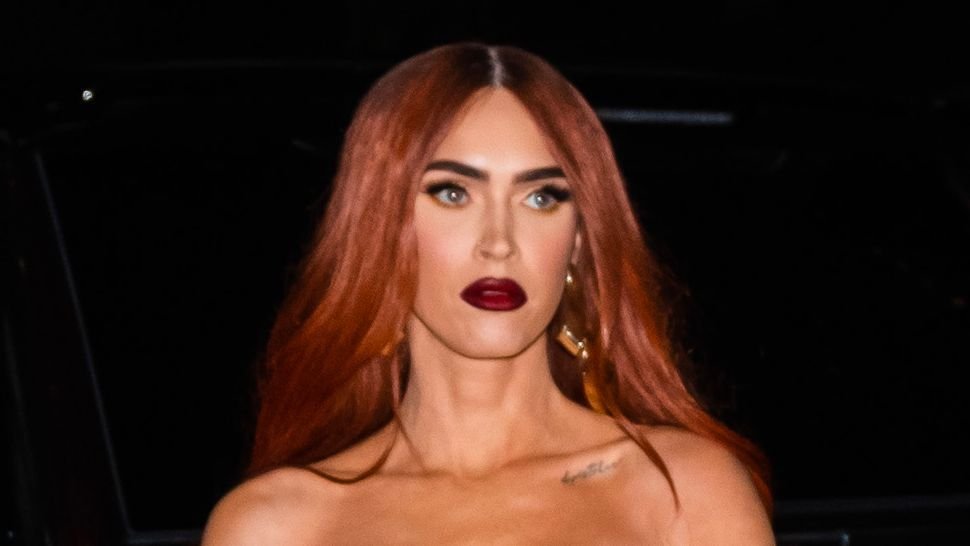 3. Getting busy in 'The Incredibles'.

When the villain, Syndrome, captures the Incredibles family, he realizes that Elastigirl and Mr. Incredible got married. Then, he notices their children and smiles as he says, it looks like they "got busy," which is a shoutout to some baby-making that hopefully no children picked up on.

4. 'Hercules' and the Oedipus reference. 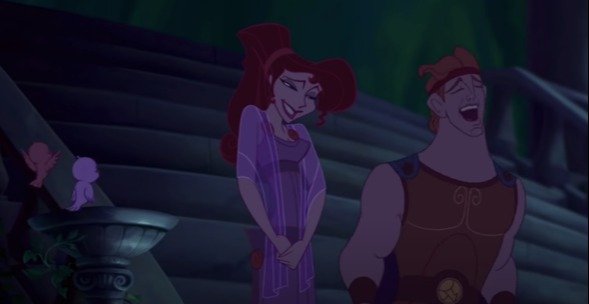 Many children became emotionally invested in Hercules's hero's journey, but they've likely never heard of the very adult and very tragic story of Oedipus. At one point in the classic Disney movie, Hercules comments on the play, Oedipus, that he and Meg watched. He says, "Man, I thought I had problems," which means nothing to children----but makes adults realize Hercules took Meg to a play about a man who kills his father, marries his mother, who eventually kills herself, and then gouges out his own eyes in shame. Yikes, what happened to a light rom-com, Herc?

5. 'The Road to El Dorado' goes beyond making out.

First of all, this movie has A LOT of adult themes for a so-called children's movie, but we're willing to bet all of the gold in El Dorado that children didn't pick up on this one. When Chel is distracting Tulio, things get pretty hot and heavy. Audiences can hear the sounds of them during a making out session and Tulio saying "Whoa!" Then, they're interrupted by someone calling for them and Chel sits up in and interesting position and Tulio sits up in another interesting position. It looks like something interesting is going down, if you know what we mean.

6. Linguini in Ratatouille and his "tiny little..."

At face value, this moment seems innocent enough — for children. Yet, there's undeniable creeper vibes when Linguini follows Colette through an alley as he tries to tell her about Remy, the rat helping him cook. He starts to confess to her that he has a "tiny, little...," and as he speaks, Colette proceeds to look down at his pants. Maybe Kristoff was right, and size does matter. Colette was checking for something, and it certainly wasn't an expert rat chef. 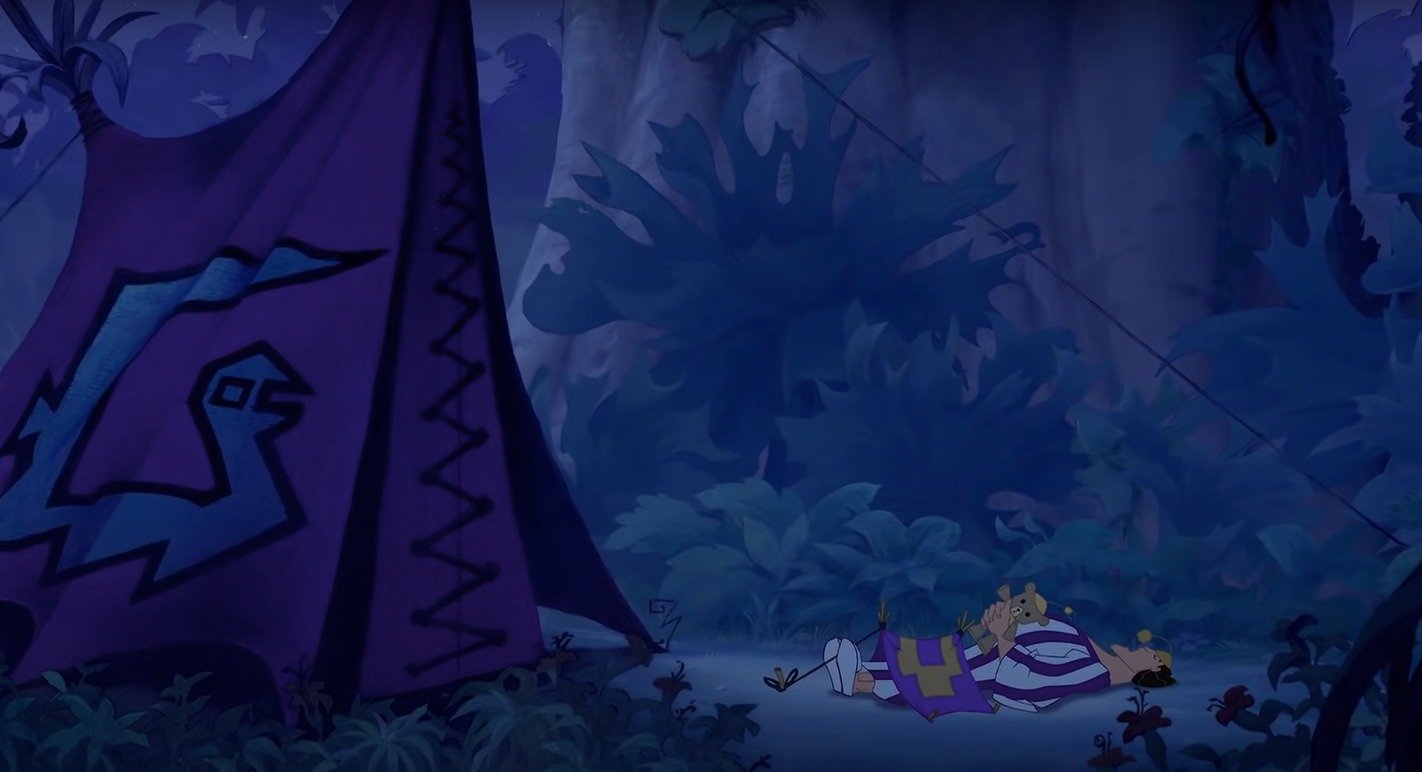 When Yzma doesn't invite Kronk to sleep in her tent, he does his own thing outside and puts up a little tent. For some reason, his little tent is only pitched around a certain part of his body, which is the literal example of a phrase we hope that children never come to understand, but adults find amusing. 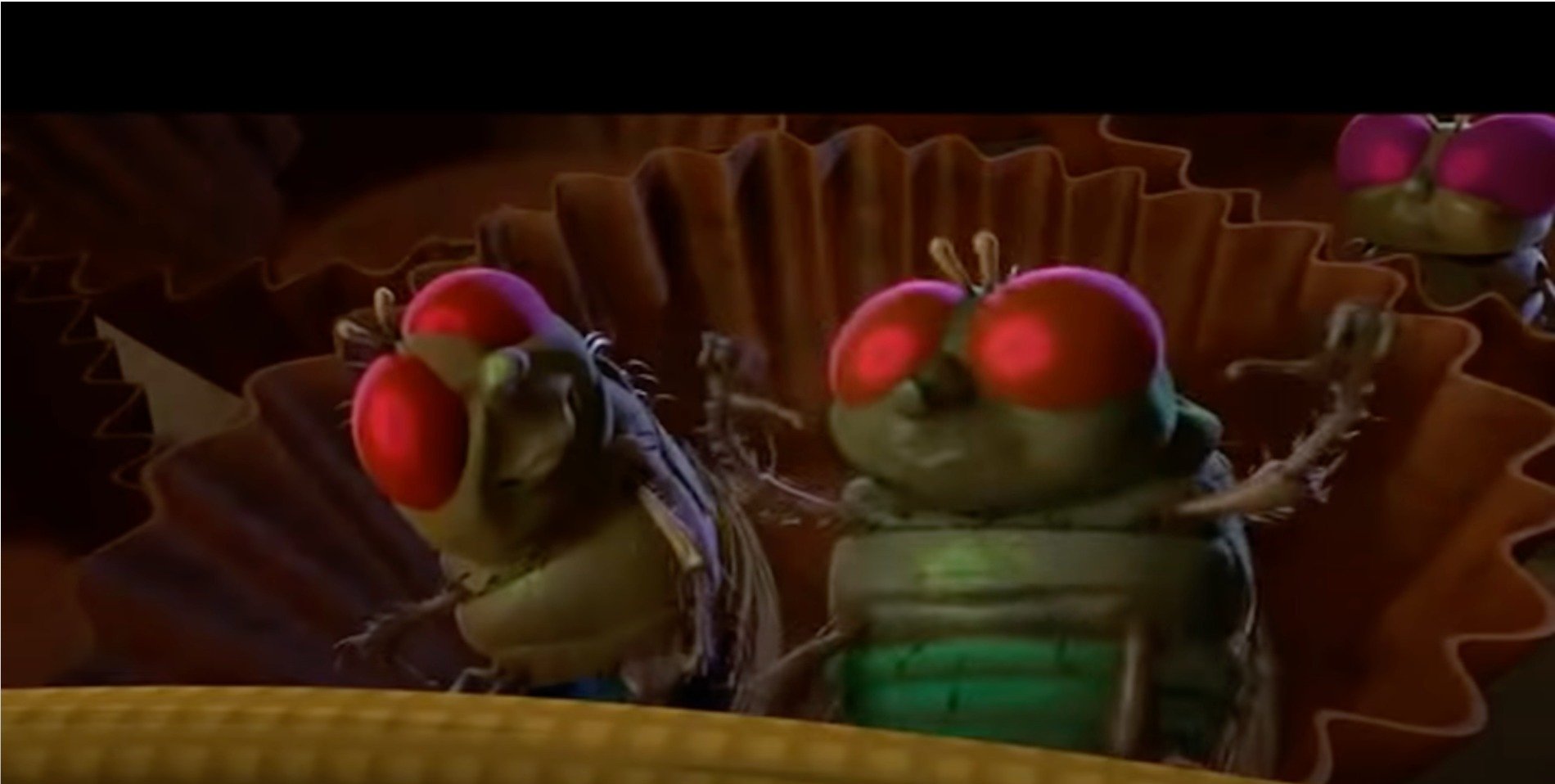 Children probably think this scene is funny, but not for the reasons adults do. When the male ladybug is assumed to be a girl, kids get that's pretty hilarious. However, when two misogynistic flies are cat-calling a ladybug they assume to be a female and one says, "Hey cutie! Wanna pollinate with a real bug?" we can only pray they don't get it.

This one is simple yet laugh-worthy for adults. While children get that Buzz Lightyear has a crush on Jessie, they may get a tad confused as to why his wings suddenly spring out when she does a cool move to open a door. It look like his wings are just popping with excitement for the girl he adores.

10. What the men in Mulan "missed the most" during war. 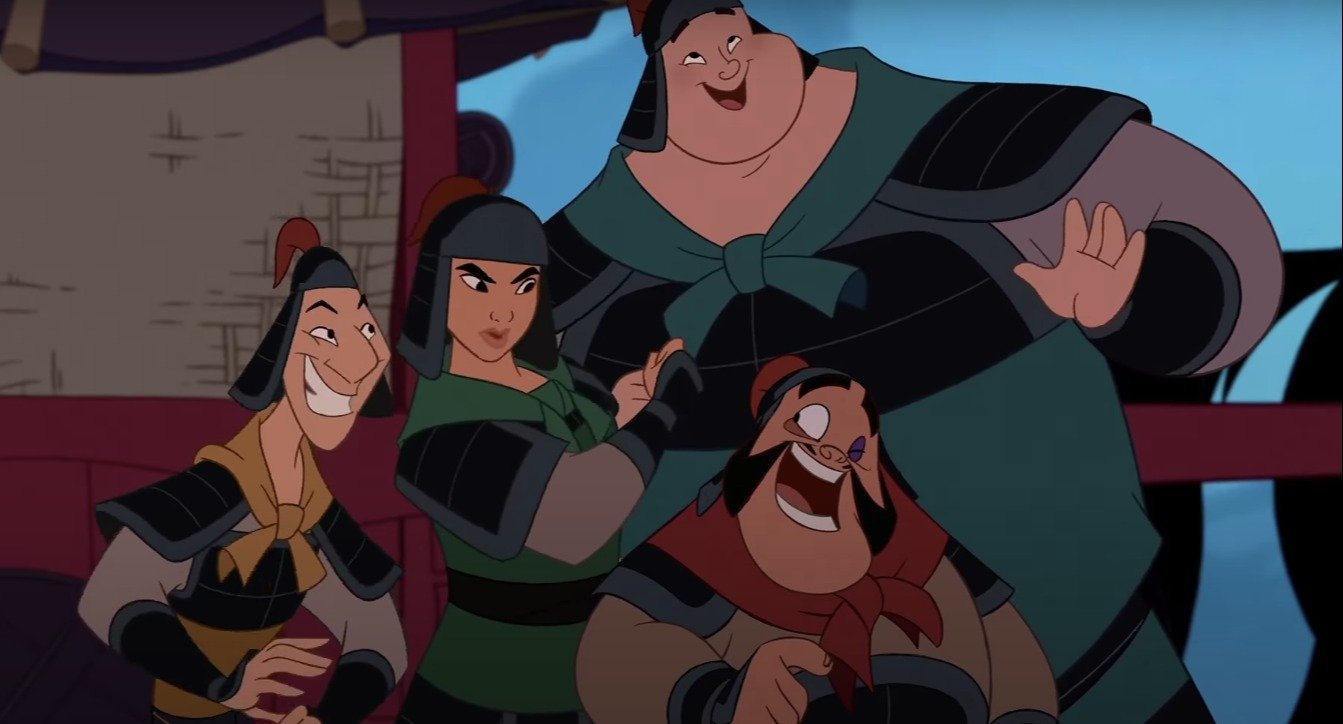 Mulan has some excellent adult jokes to choose from, and this is no exception. The song, "A Girl Worth Fighting For," is about men at war missing women for their appearances, adoration, cooking, and other things...The men sing, "You can guess what we've missed the most since we've been off to war," and we do believe most adults can make some pretty ample guesses.

This one isn't so much raunchy as it is leaning on the stereotype that men lie to women to make them happy---which is something that the human form of Cogsworth alludes to having experience with when he says the Beast should gift Belle with the usual, "Flowers, chocolates and promises you don't intend to keep." Wow, it sounds like Cogsworth may have a story or two to explain that line.

12. Inside Out and bears in San Fransisco 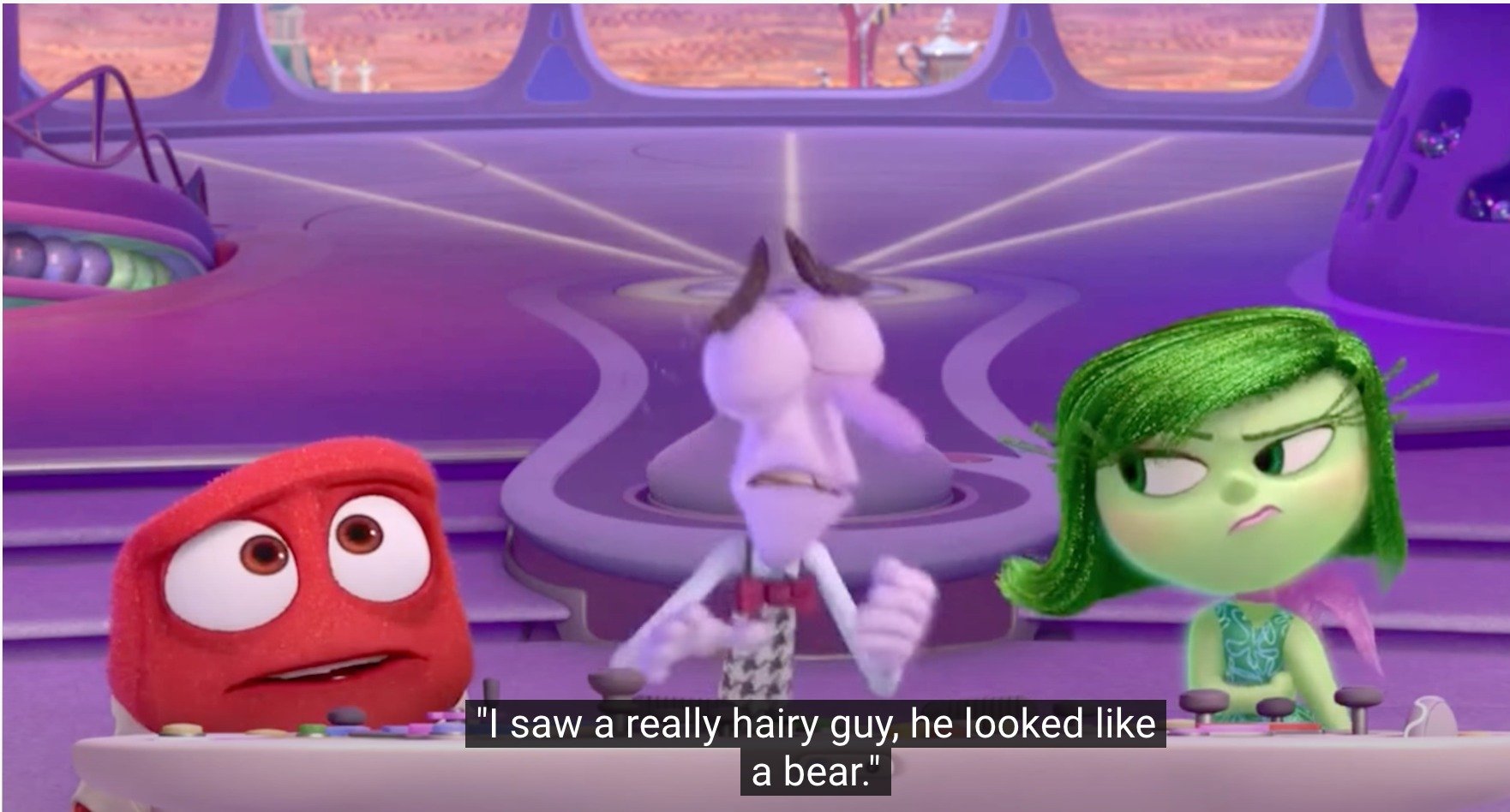 Inside Out was such an important movie to help both children and adults learn about mindfulness, trauma and overall emotional regulation — and apparently references to older gay men in San Fransisco. When Disgust explains that "there are no bears in San Fransisco" and Anger replies that he saw a hairy guy that looked like a bear in the city, adults can easily crack the code. They're not talking about an actual bear, but the nickname for gay men of a certain age living in the world's main hub for LGBTQ communities. It's kind of a random joke for a pretty tame movie, but it does remind grown-ups that it's not rare to make a bear-sighting in San Fran.

Near the end of Shrek 2 when everyone is singing "Livin' La Vida Loca" and dancing on stage, Puss in Boots decides to take things to the next level with what looks like a mini burlesque show. He and Donkey sing the lyrics, "She makes you want to take your clothes off and go dancing in the rain," and then Puss proceeds take his hat off, sit in a chair leaning all the way back and pull a chain to make water pour all over his body. We're pretty sure most of the parties in Shrek movies go in a raunchy direction, come to think of it.

14. 'Aladdin and the King of Thieves' and the earth-moving honeymoon.

While third movies in a franchise don't usually stand out, there's one particular scene in this Aladdin movie that definitely raised some adult eyebrows but didn't even phase kids. Aladdin is happy to finally be with Jasmine, but there are still a few obstacles in his way. When an elephant makes the ground shake violently, Genie chimes in with a spicy comment, saying "I thought the earth wasn't supposed to move until the honeymoon." We figure the creators sympathized with the poor parents that had to sit through yet another Aladdin sequel, so they decided to throw out the censorship rules.

This joke is a bit on the lighter side compared to other adult jokes, but still deserves a place in the list of jokes that most children missed in movies category. Timon is trying to save Pumbaa when he's afraid Nala is going to eat him, and he frustratedly shouts, "Why do I always have to save your...," but his last word is interrupted by a "aah!" scream when Nala gets close. It's pretty clear that "aah!" was supposed to be a different and edgier word.

Let us know in the comments what you think of these adult jokes in children's movies. Are there any that you never noticed before?